My Wildwood Wrap Dress of Gingham

Nearly a year and a half ago I got an email from Peggy of Sew House 7 patterns asking if I'd like to test a wrap dress pattern for her. I have a soft spot for wrap dresses, so of course I said yes! 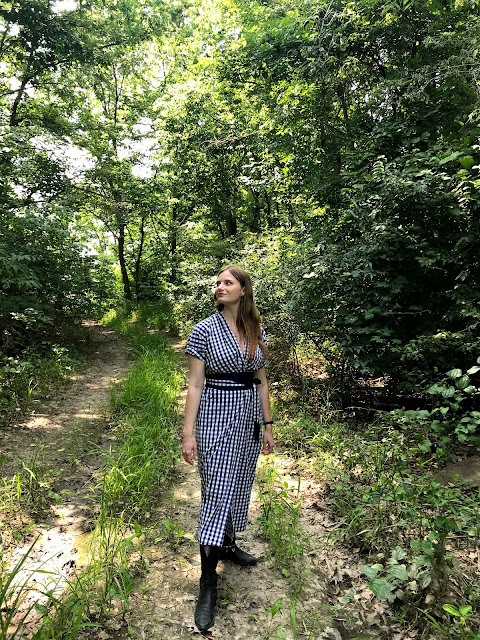 In late spring of 2019 I tested the pattern and sent my feedback off to Peggy along with all the other pattern testers. Since then, she has altered and adjusted the pattern, added another sleeve and and skirt length option, and extended the size range of the pattern. After all that hard work, finally this week, the pattern was ready for it's debut. 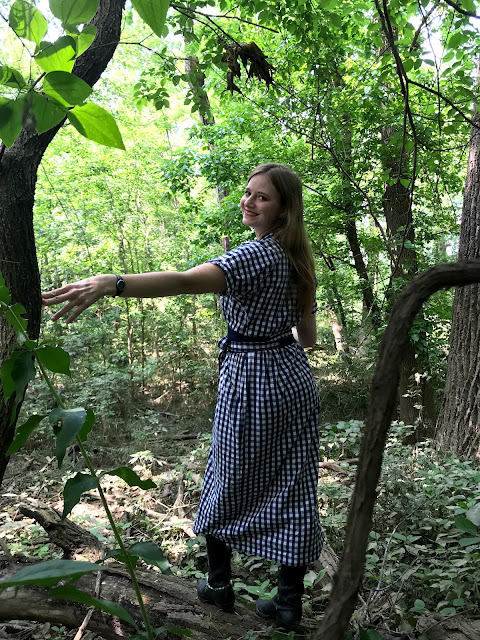 It's called the Wildwood Wrap Dress and I just love that name! It conjures up romantic images of time spent wandering through the forest, observing and discovering secrets the forest holds, coming out into a clearing with sunlight filtering through the surrounding trees. A wonderful, blissful, afternoon of the type Anne Shirley and Dianna Berry would enjoy. Never underestimate the power of a good name. If I hadn't already been sold on testing this pattern because; A) Sew House 7 patterns are awesome! and B) I love wrap dresses, the name would have sealed the deal. 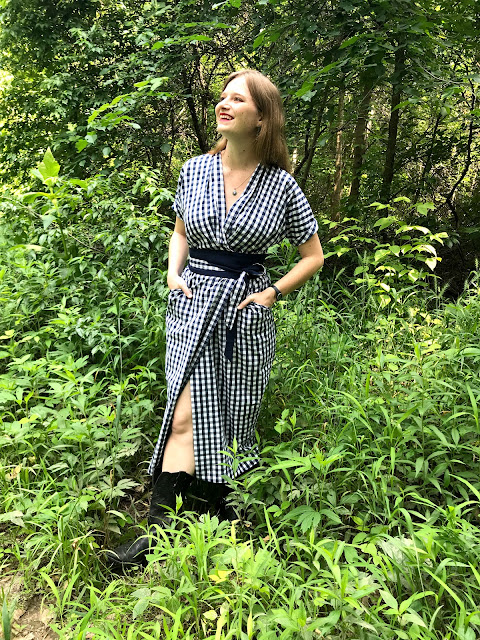 This pattern was specifically designed with linen in mind. I was totally going to find a nice linen to make my dress from, but then I fell down a rabbit hole of gingham wrap dresses on Pinterest. I wanted one. Hobby Lobby just happened to have a really nice 100% cotton yarn-dyed navy blue gingham in stock at the time, so I decided it was meant to be. My Wildwood Wrap Dress would be gingham. Maybe  in the future I could make another out of linen. 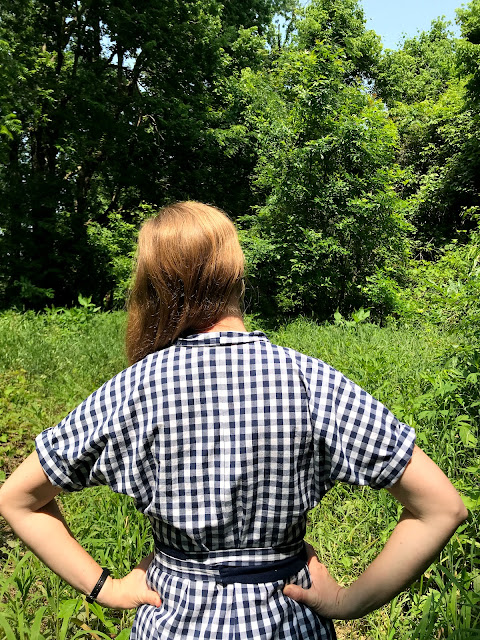 The bodice features cut-on sleeves and a shawl collar. It's fitted with tucks in the front waistline. 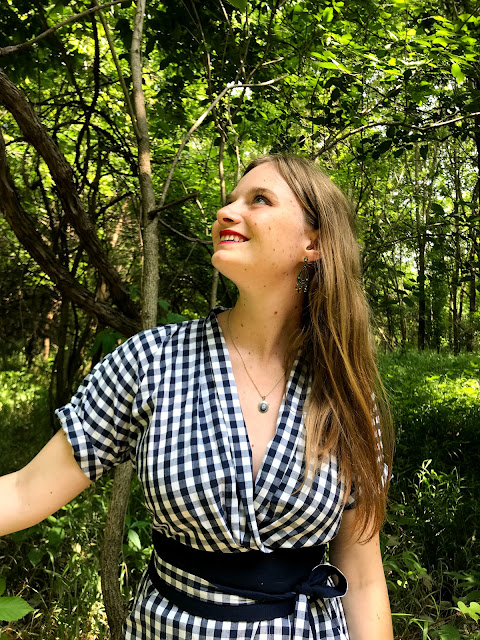 It's rather loose and breezy, but still gives great coverage and doesn't gape easily - a definite plus for a wrap dress. 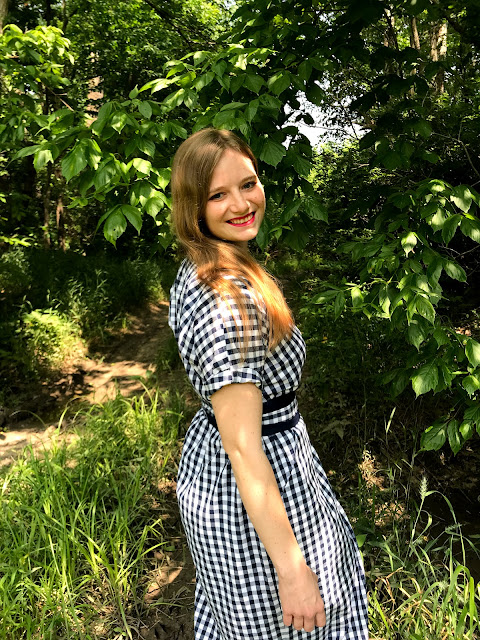 Now the skirt is considerably straighter and tighter than what I usually go for. Not my usual silhouette at all! 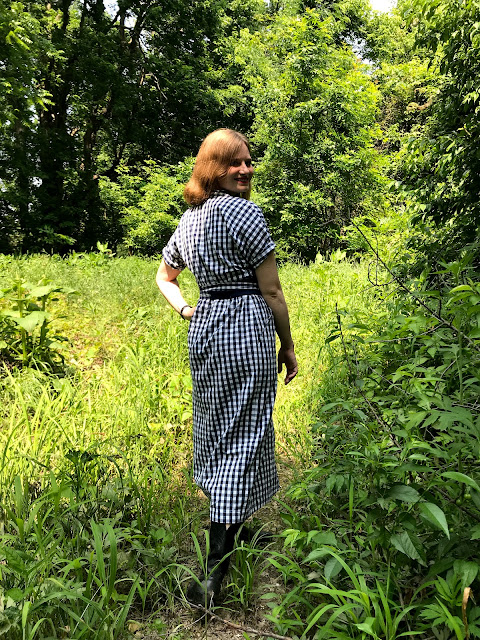 That said, I don't think I'd ever before worn a skirt with this silhouette, so I thought it was worth a try. Did straight skirts truly not suit me, or did I just *think* they didn't suit me? 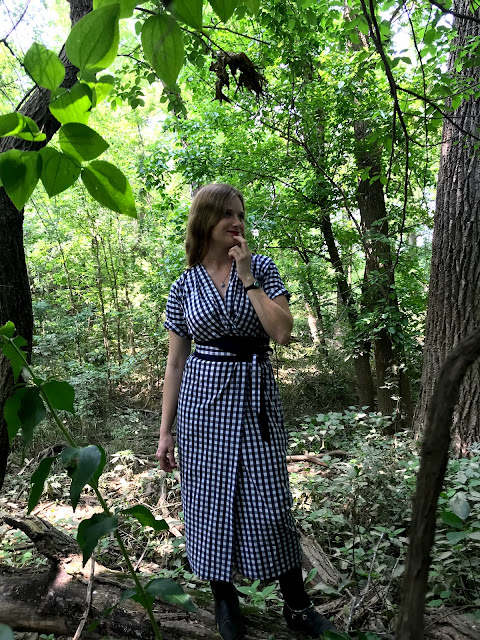 Well, let me just start by saying I do like this dress, and have worn it quite a bit since I made it a year and a half ago, but no. I'm just not a straight skirt kind of girl. I really appreciate this pattern overall, but if I make it again I intend to pair the bodice with a fuller skirt. That's just personal preference. 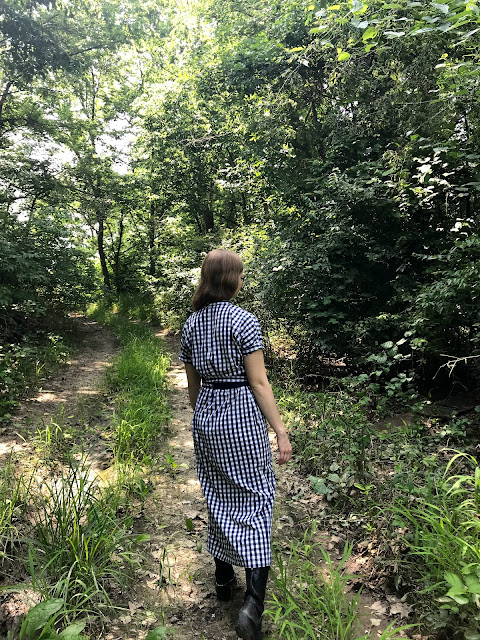 A straight skirt, especially a straight wrap skirt just doesn't fit in with my lifestyle of keeping up with, playing with, and caring for kids and livestock. It's hard to get down on the floor to do a puzzle with a 5 year old in this dress, or climb over a fence to check on a goat in the field. However, running errands on a Saturday? Going out with friends? Cooking dinner or sewing at home? This dress was made for that! It's one of those dresses I'll throw on when I get home from work in the evenings, because it's just so comfortable! 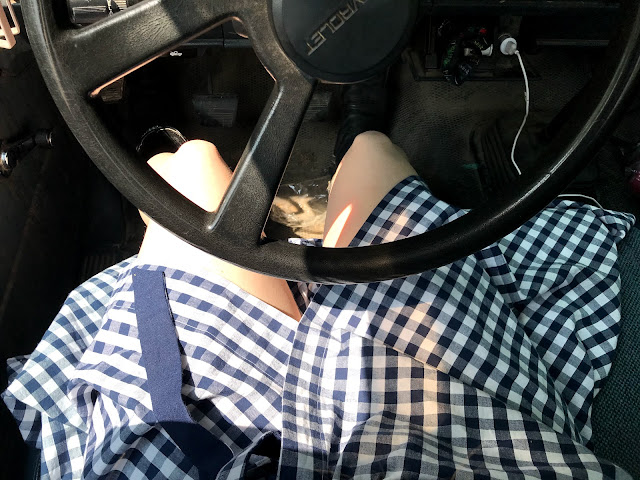 When I first made this dress I had an issue with the skirt falling open, all the way open, every time I sat down. That was inconvenient to say the least. 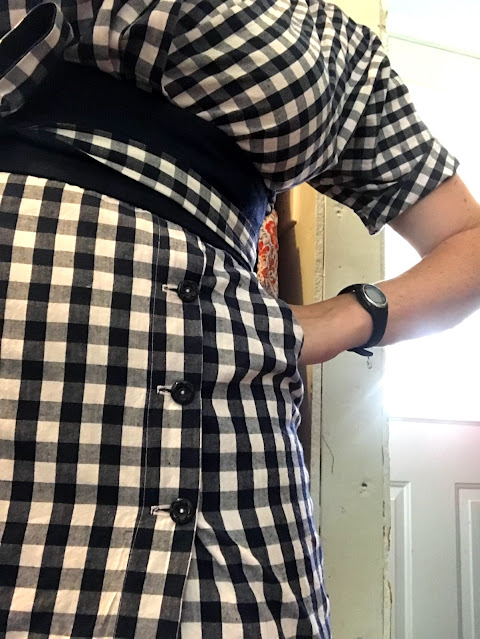 I fixed the issue by adding three buttons to the top of the skirt to keep it closed from waistline to upper hip. 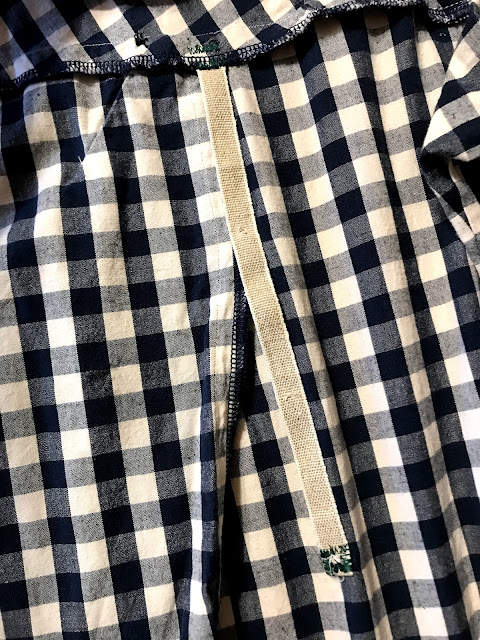 My buttons are stabilized with a piece of linen tape on the inside of the skirt. You could also stabilize the buttons with some interfacing, but I like how the tape doesn't interfere with the drape of the fabric at all the way fusible interfacing would. 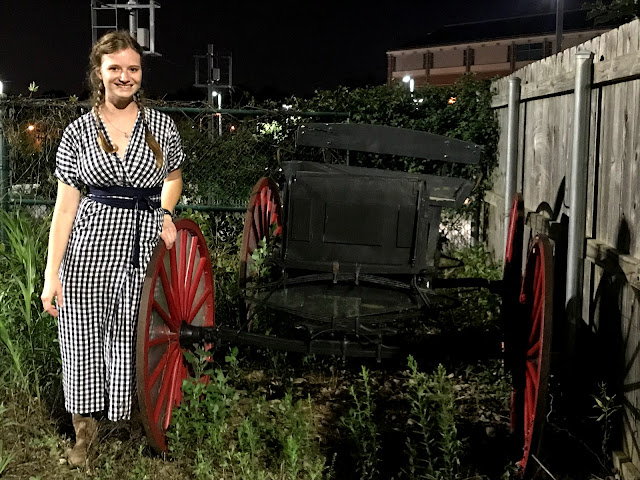 Once I had those buttons on, I felt much more comfortable wearing this dress out and about than I was previously. Since this "skirt falling open" issue was revealed during testing, the pattern was amended prior to release to include instructions for adding a hook and eye to keep the top of the skirt closed. This does the same thing as my buttons - just invisibly! 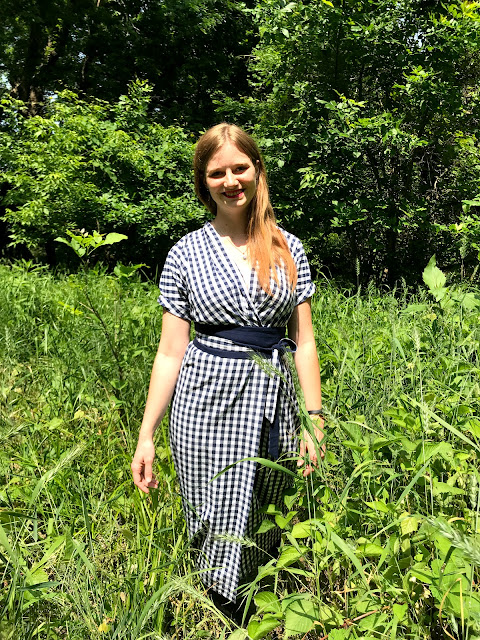 Now, since I've complained enough about the skirt, let me tell you what I actually love about it. 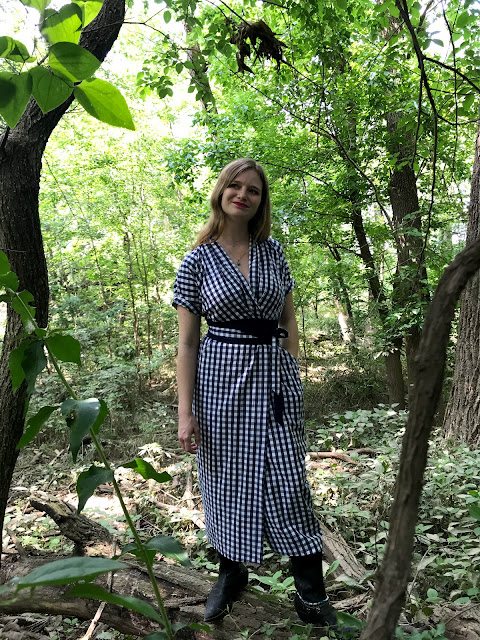 It has the most large and amazing pockets ever! They are huge, so they can hold just about anything, and they're also well supported so they don't gape or drag down the skirt no matter how much stuff you shove in them! 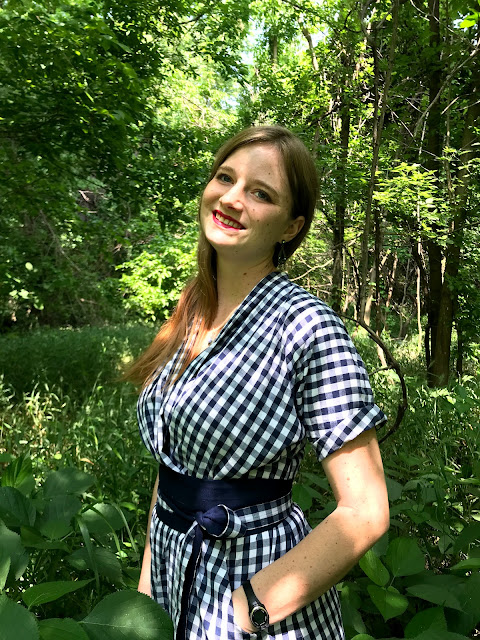 Yep, these are THE BEST pockets!!! 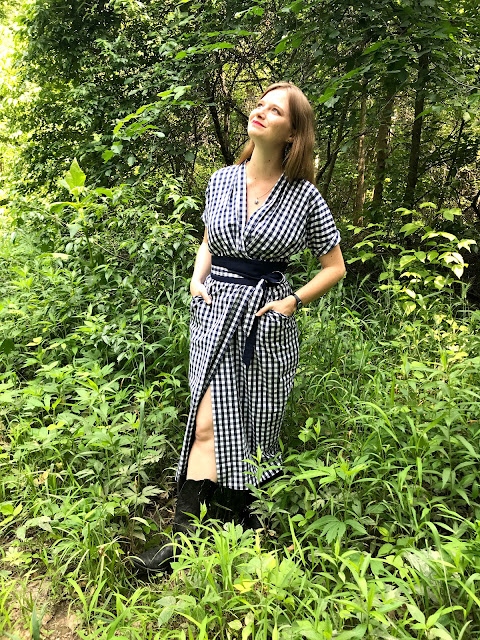 You know how I said earlier that I plan to use this bodice pattern again and just add it to a different skirt? Well, I'll probably do that with this pocket pattern as well. It's really great! 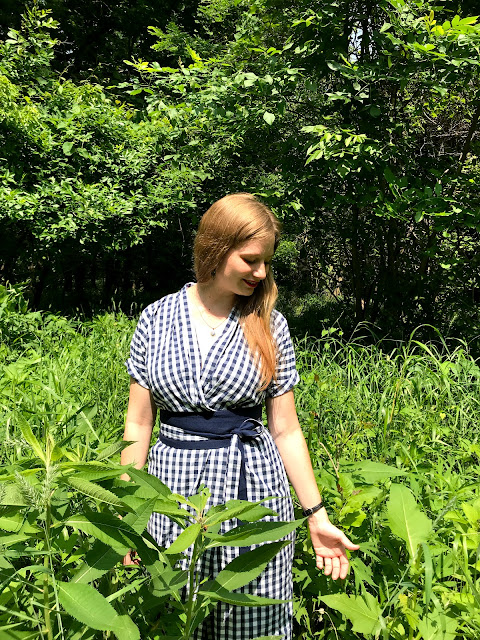 Sometimes a pattern may be a really great pattern, like this one, but elements of it may not be your style, like this skirt for me - and that's ok! The fun thing with sewing is you can customize almost anything to fit your tastes! You can hack patterns to your heart's content to get a garment that's truly "you" in the end, while still retaining what appealed to you about the pattern in the beginning. I love starting out with a pattern, then taking it my own direction. 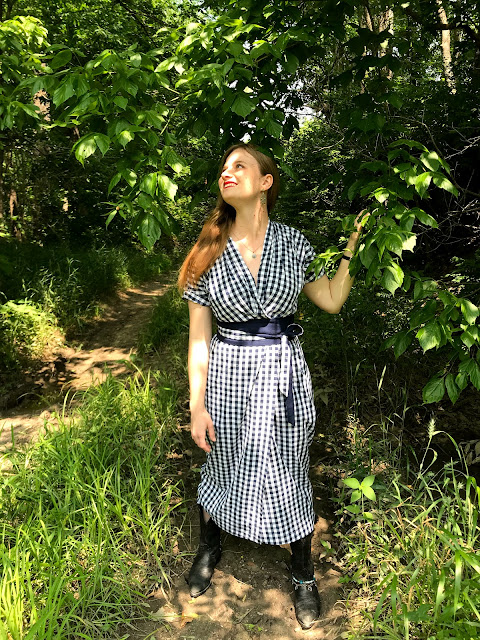 This dress fastens at the waist with a button and loop on the overlap and twill tape ties on the underlap. The final piece is an obi-inspired wrap belt. 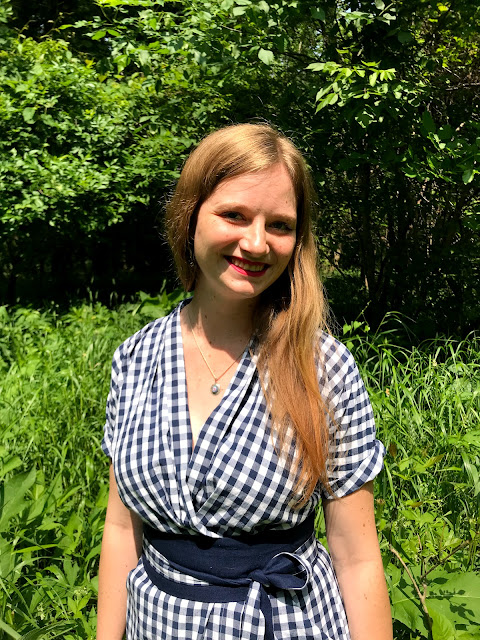 To break up all the gingham a little bit, I made the main part of my belt out of navy blue linen, left over from this skirt, and made the ties reversible with linen on one side and gingham on the other. The perfect finishing touch! 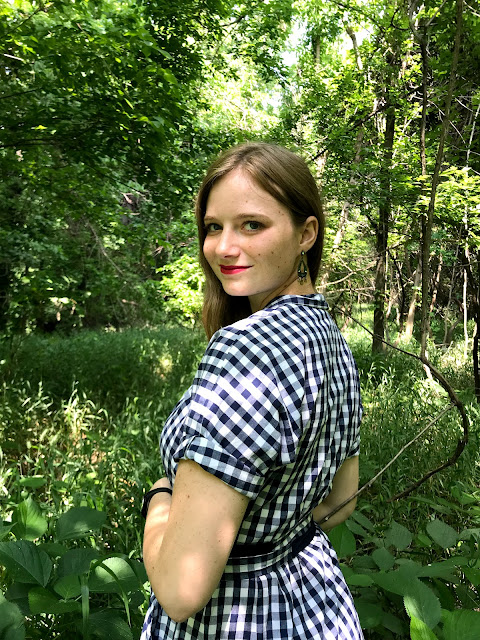 As the belt, and other elements of this dress design are clearly inspired by traditional Japanese fashion, I decided to wear this dress to the Japanese festival with my friends last year. 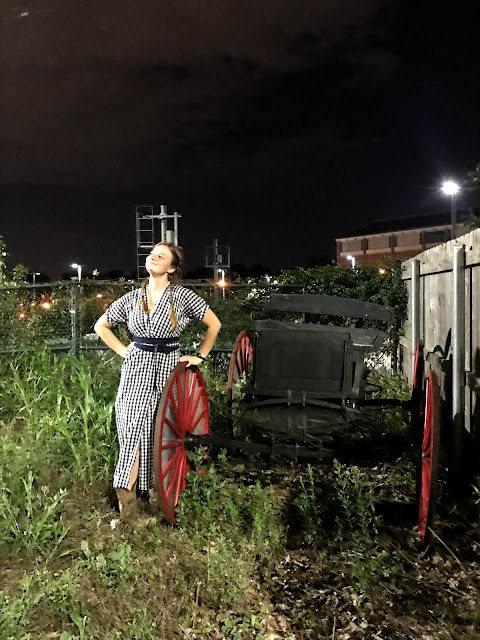 I got several compliments on my dress and a few people asked if I'd gotten it at the festival. 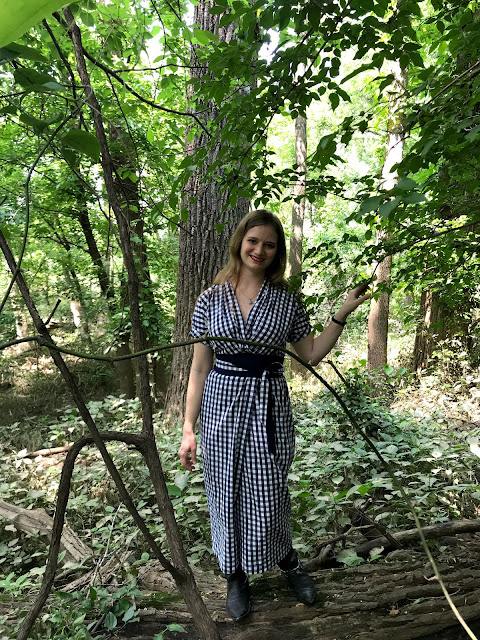