I have wanted a pair of 18th century buckle shoes for at least 15 years now. 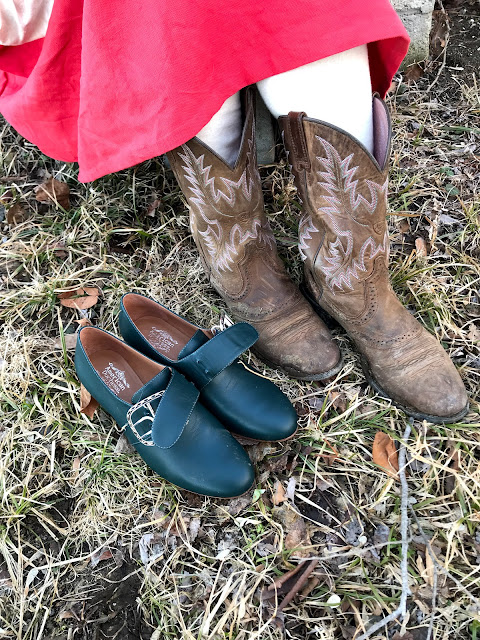 When I was around 10 years old, Felicity was my favorite American Girl Doll. Her story was set in Williamsburg Virginia in 1775 - just as things were really getting tense between the American Colonies and England. Like me, Felicity was the eldest of 4 kids and had a tomboy streak - so I could relate to her. My wonderful mom and grandma made me multiple Felicity - style dresses and caps, which I wore both for Halloween dress-up, and everyday use.


I had the dresses and caps. I made myself a couple elastic-waist petticoats. All I was really missing was the right shoes. 18th century buckle shoes aren't really that easy to come by! So, for a couple years, I wore a pair of plaid black velcro shoes with my Felicity clothing and contemplated making cardboard buckles to stick on the velcro straps. I don't recall ever actually making said cardboard buckles, but the thought definitely entered my mind more than once. 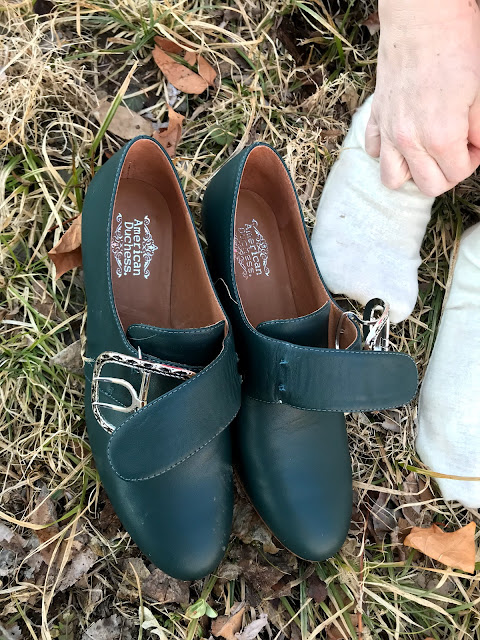 Fast forward to now, where I have discovered the hobby (world?) of historical costuming and am very, very, slowly working on making a 1775 ensemble for myself. (10 year old me is squealing with delight at the thought!) I've also discovered that reproduction historical shoes exist, and ever since beginning my Felicity-era  outfit I've had the idea in the back of my head that once I finished all the pieces I could make, I would treat myself to a pair of 18th century buckle shoes from American Duchess. 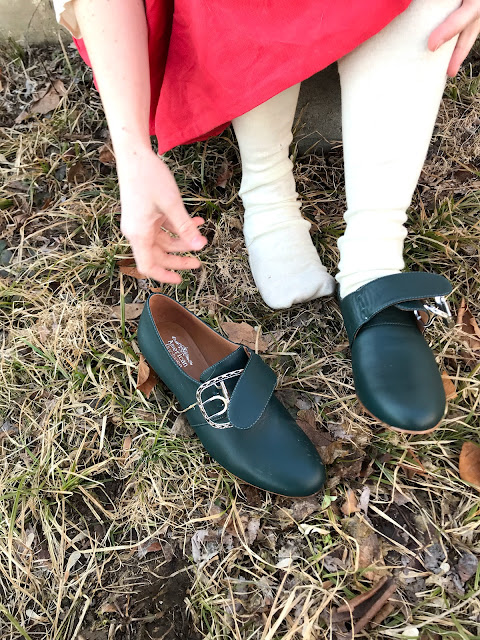 As of the end of 2018, I had exactly one 18th century item done - a white linen shift - and nothing else begun. I was nowhere close to buying those buckle shoes I've wanted to own for the past decade and a half. But. . . but. . . in the week between Christmas and New Years, American Duchess had a sale - buy a pair of shoes and get a set of buckles (usually sold separately) for free. 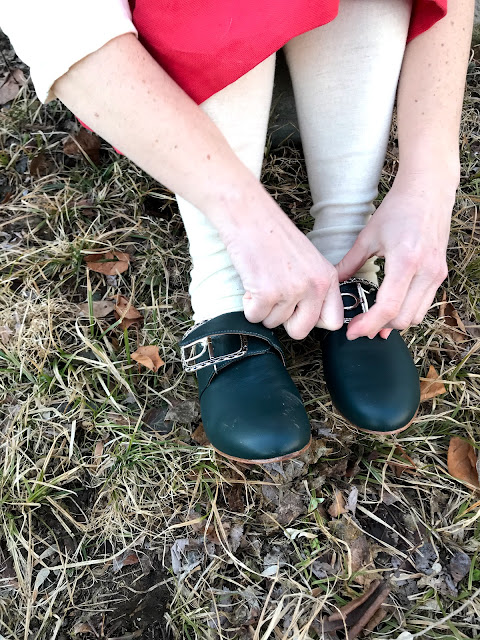 Maybe I should have resisted, but. . . but. . . they had forest green buckle shoes (my favorite color!) and there was only one pair left in my size! So, yes, I bought them - the 18th century, forest green, "Kensington" buckle shoes from American Duchess. 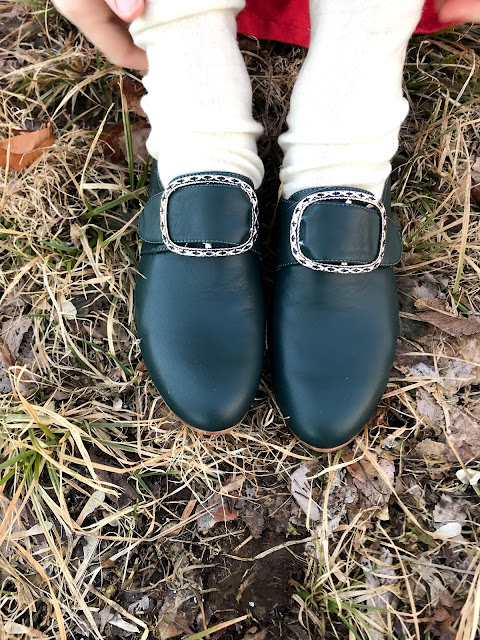 As soon as I ordered them, I realized this meant I really had to get a move on with my late 18th century costuming. Thus, that very day, I began my next project, something quick and easy, but something, a linen under petticoat. 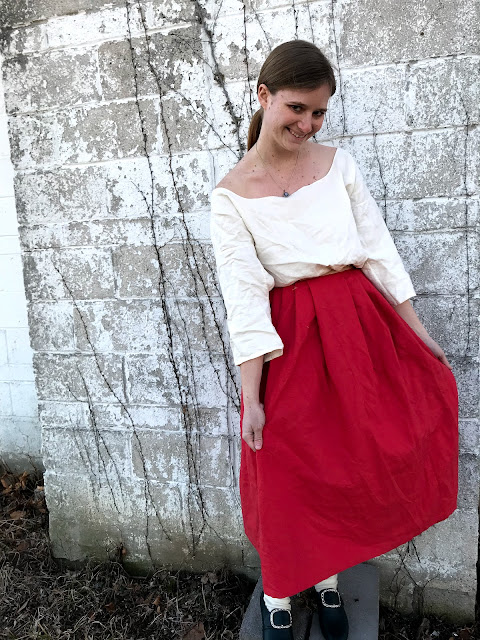 I pulled some fabric out of my stash, read the instructructions for making an under-petticoat in The American Duchess Guide to 18th Century Dressmaking, and proceeded to sew the petticoat up, by hand, in under a week. The cat helped. 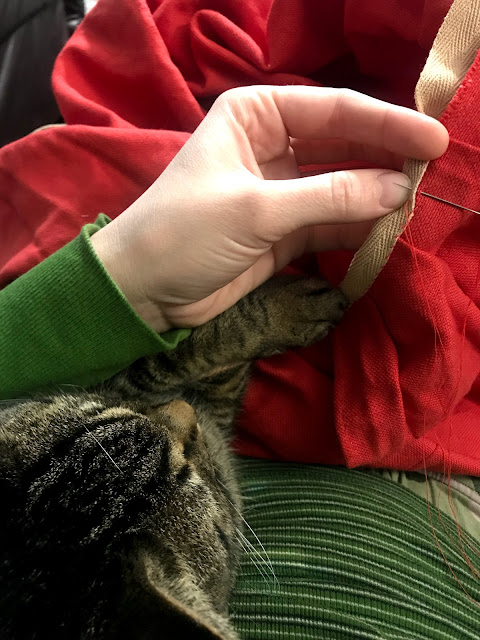 In my stash I happened to have 3 yards of a rather stiff, somewhat thick, red linen. I ordered it back at the beginning of 2018 when I first started planning my 18th century ensemble. When it came, it was most definitely not the texture or weight I needed for my planned project. Also, it would seem red linen wasn't really a "thing" in the 1700. Red wool was, but linen takes dye differently than wool and was not often dyed bright colors, apparently. 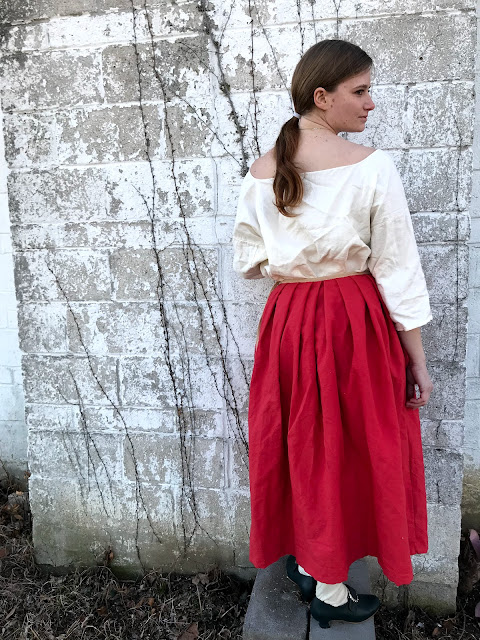 Thus, due to all that, this red linen would not work for the original intended purpose. However, since I'd bought it, I did want to use it for something!

And that my friends, is why I decided to make a petticoat from stiff red linen - an online fabric purchase gone wrong. 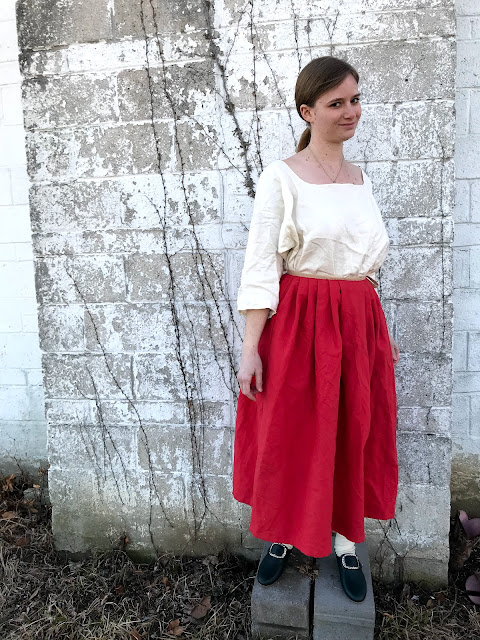 The petticoat really was very quick and easy to put together, even though I decided to completely hand sew it.
(I'm planning to hand sew most of my 18th century ensemble because a) it's historically accurate, and b) I like having a continuous hand sewing project to work on in front of the TV or take with me places to work on while I wait for appointments or whatever.) 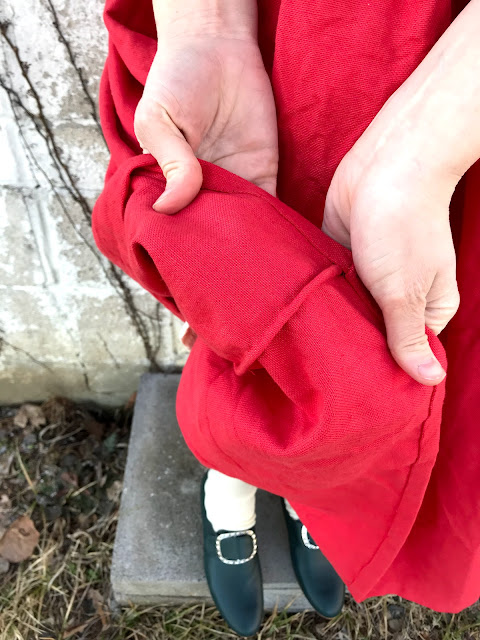 First I sewed up the side seams. One got sewn up as a Mantua Maker's seam (A really clever technique where the finished seam looks like a french seam but is way quicker to make. This is the type of seam I used n the skirt of my white regency dress.) 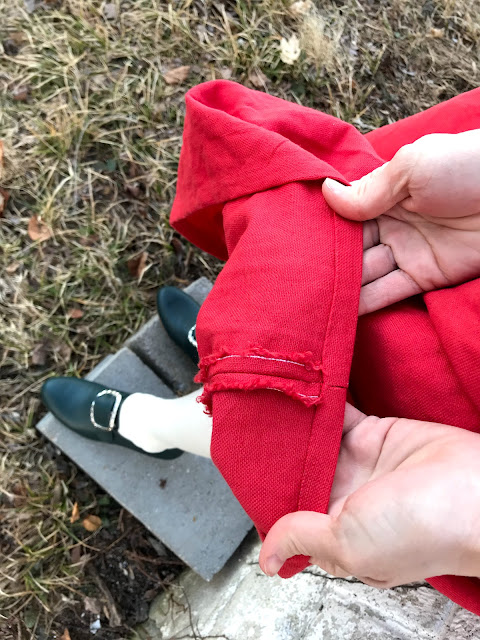 The second side seam was along the selvage edge of the linen so I just sewed it with a normal back-stitched seam since the seam allowance did not require finishing. (Selvage edges don't ravel.) I left the top 10" of this side seam open so I'd be able to get the finished petticoat on and off. 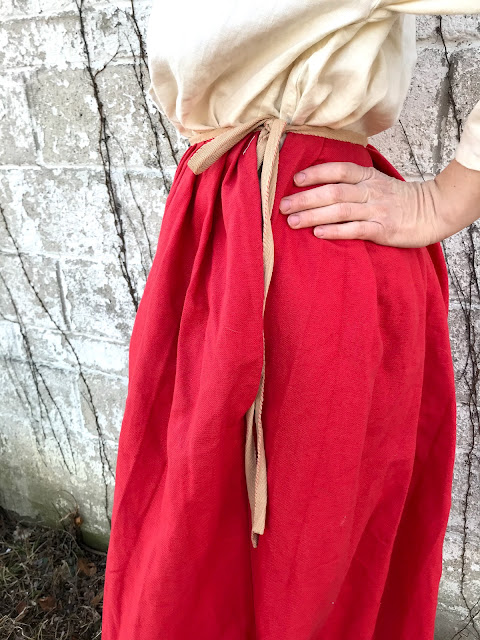 I narrowly hemmed the edges of this opening, then I hemmed the bottom edge of the petticoat. After that I pleated the upper edge to approximately my waist measurement. 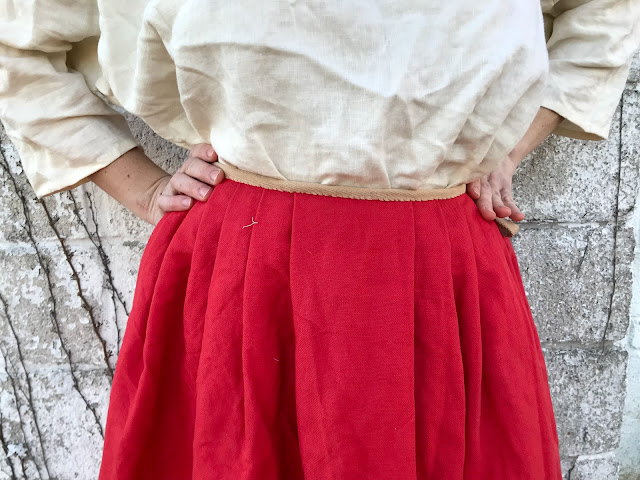 Finally, I encased the pleated edge in twill tape, and left long tails of tape on the open side of the petticoat. 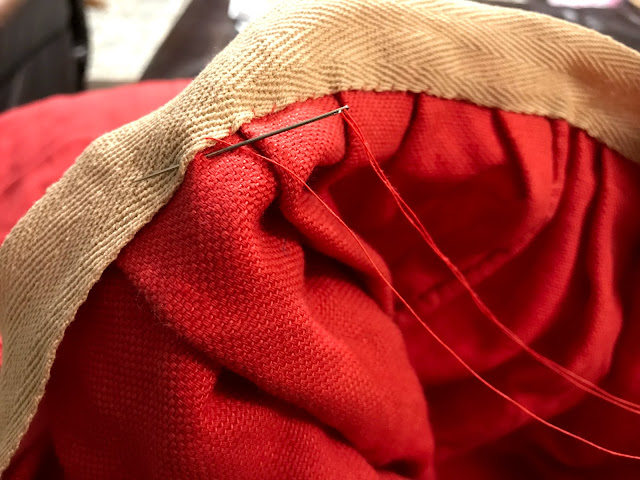 These tails serve as the petticoat's closure method, allowing me to tie the petticoat in place around my waist, over my shift. 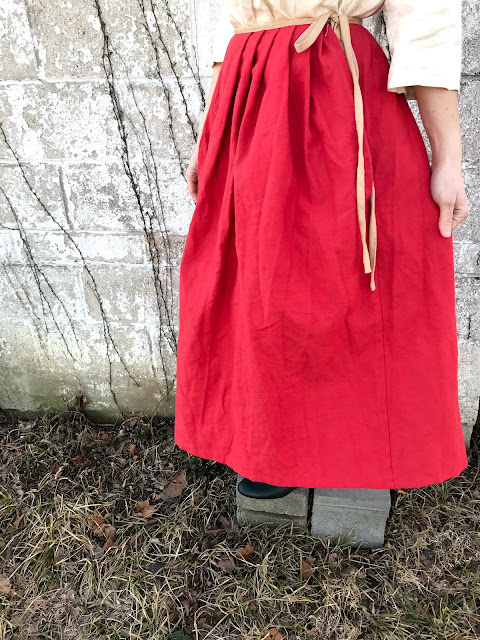 And with that, the petticoat was done! Just under a month before the beginning of the Historical Sew Monthly February Challenge - Linen. (To qualify for a historical sew monthly challenge theme the item must be finished no more than one calendar month before the month challenge is due. As my linen petticoat was finished after the first of January, it qualifies for the February "Linen" challenge!) 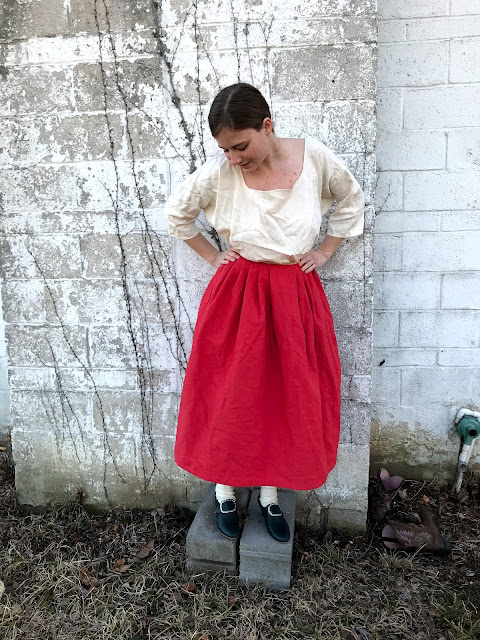 What the item is: An 18th century under petticoat
How it fits the Challenge: February 2019 - Linen. It's made from linen fabric.
Material: A heavy-ish red linen
Pattern: None really, but I did use the instructions from "The American Dutchess Guide to 18th Century Dressmaking"
Year: It would work for most of the 18th century, especially the second half.
Notions: Cotton twill tape and vintage cotton thread
How historically accurate is it: The shape and pattern are accurate. The construction is accurate, completely handsewn. The fabric is the right fiber, but the wrong weave and color. The notions ought to be linen, but are cotton. So, 70%
Hours to complete: Around 6 I think
First worn: Just for pictures, 2/24/19
Total cost: Under $20 I think, it's been a while since I bought the fabric. 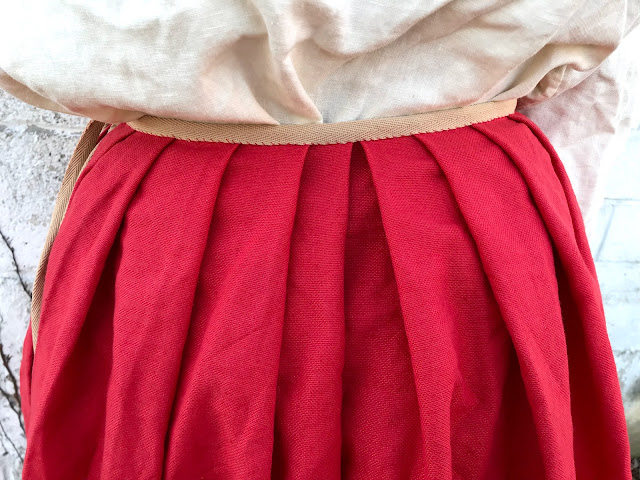 And now, I suppose I really should get a move on and make my 18th century stays, so I can actually make a gown to go over this red petticoat one of these days! 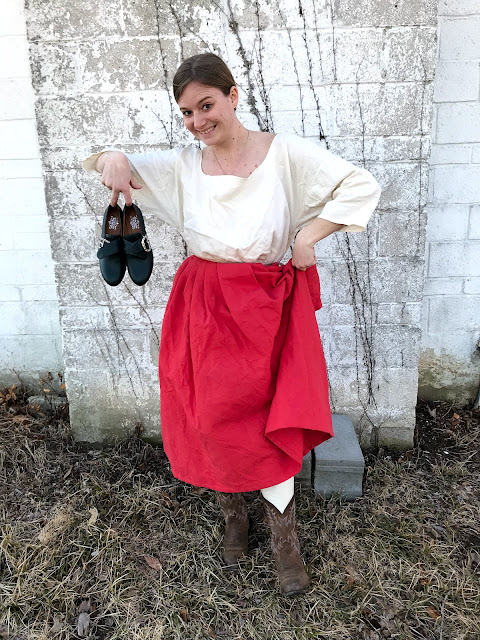 Or I suppose I could postpone that a little longer and make other various sundry items for my 18th century look first - such as a cap, or pockets, or even another petticoat. But really, I should just jump in and make the stays!