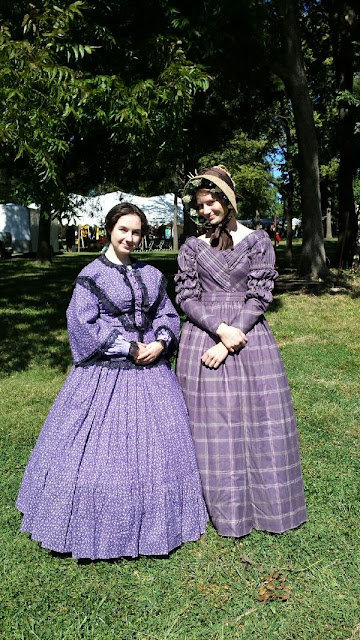 Now I didn't really have a reason to go to the Heritage Festival in historical clothing, but I didn't have a reason NOT to either. So, I used that as my reason. I'll take any excuse I can to wear my purple plaid dress! My lovely friend Erentry came with me. She wore the Civil War dress that my grandma and I (mostly my grandma) made when I was 14. 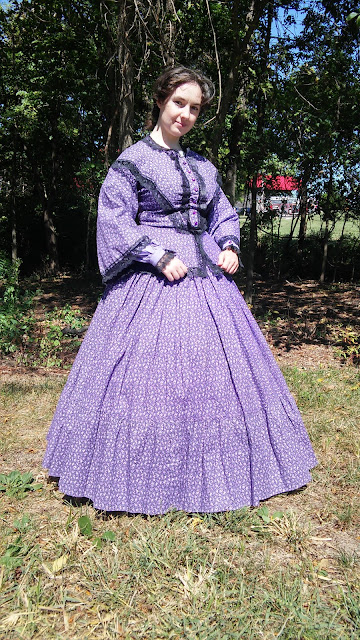 It was so much fun to have a friend along who was also dressed in historical clothing. She seemed to be rather impressed with how comfortable the hoop skirt was. It was just a bit limiting in certain situations. Such as when we attempted to walk on stilts. 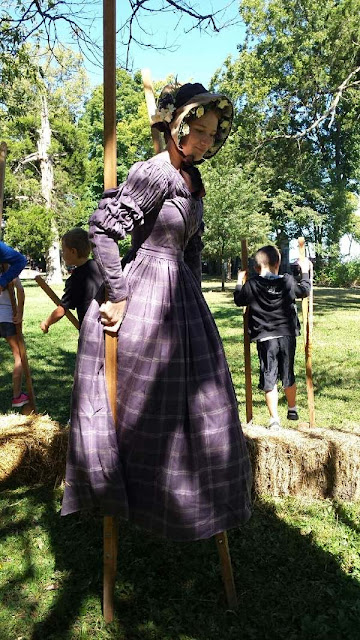 I managed 2 or 3 very wobbly steps with my squishable petticoats. With her non-squishable hoops Erentry could barely manage to get on the stilts, and walking on them wasn't going to happen. However there are certainly upsides to the hoops, which caused woman to replace their many petticoats with hoops and just a few petticoats in the late 1850's. 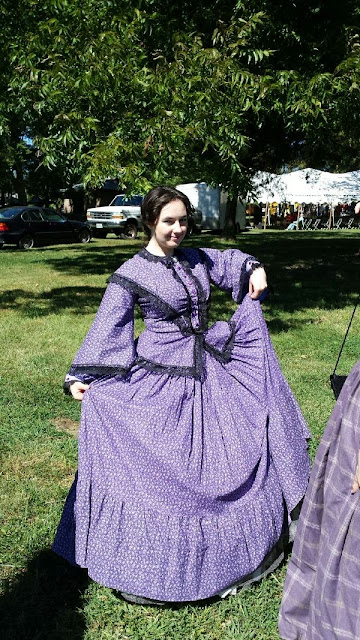 The biggest one? Wearing a hoop skirt is quite a bit lighter and cooler than wearing countless petticoats. 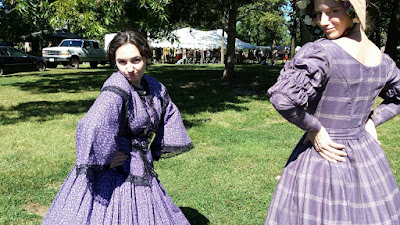 Along with stilts there were other activities to enjoy. Several people were demonstrating period crafts. There was woodworking, tin working, lacemakeing (my favorite!), spinning, and rag rug making. One of the more popular ways to make a rag-rug is called twining. There were several ladies demonstrating how to twine, with rugs, place mats, and potholders for sale. 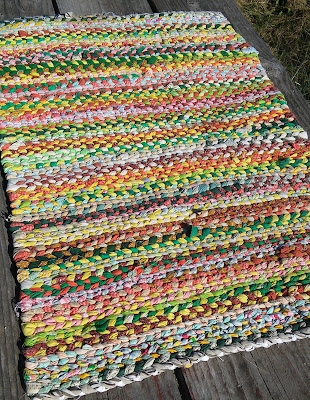 I twined this rug a couple winters ago. I'm rather proud of it, but it had gotten rather dirty. So, I asked one of the ladies who was twining what the best way to wash it would be. She said to just throw it in the washer on gentle, then lay it out in the sun to dry. So that's what I did when I got home, and the rug came out of the washer still intact and beautifully clean!

My favorite part of the Heritage Festival was probably walking through the different historical buildings in my historical dress, although my 1837-1842 dress pre-dated most of the buildings. 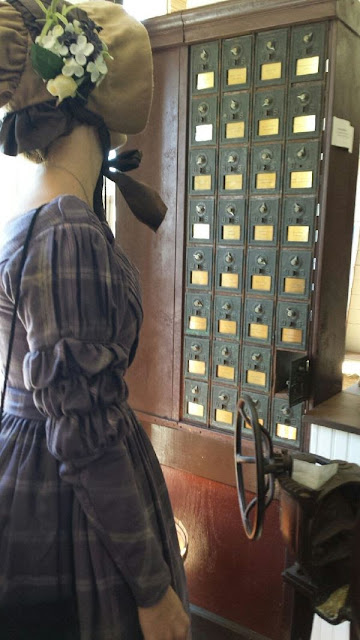 I found the mailboxes in the general store rather interesting. Imagine having to go into town every time you wanted to get your mail! Along with the general store there was also a log cabin (from the approximate time of my dress!), a 3-room farm house built around 1911, and a big house built in 1877. That was probably the most interesting house. It would have been a mansion in its day.
I gave my name and number to one of the ladies giving tours in the house, as she was interested in having a historical dress made. Well, that evening I got a phone call. Apparently the person who was supposed to sit in the sewing room the next day wasn't going to be able to make it. So they were wondering if I would be interested in coming to sit in the sewing room for a few hours the next afternoon. I said of course! 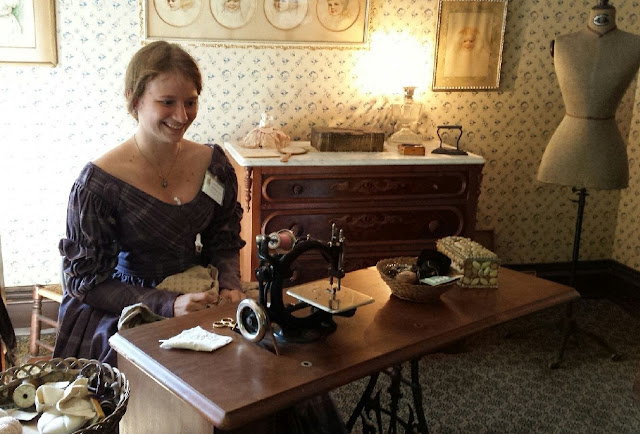 The sewing room was built in 1891 when the sleeping porches were enclosed. It was used for a seamstress who would come a few times a year to make new clothes, or mend old ones, for the family.
(Yes, my dress is about 50 years to early for this room, hopefully I'll have my planned 1888 dress done by next year!)
I loved getting to be a part of the festival and getting to educate people (just a little) about sewing in the late 1800's.

My dress, of course, I made about a year ago. My bonnet I made last winter to go with it. However, the bonnet wouldn't stay on my head, it kept sliding off. Last week I fixed that! I came across this blog post about bonnet stays. A bonnet stay was piece of wire or velvet ribbon that held the bonnet on the wearer's head. (apparently bonnets sliding off has always been an issue.) Well, I had some wide brown velvet ribbon in my stash, so I decide to attempt to make a bonnet stay. First I laid the ribbon across my head to figure out how long it needed to be. 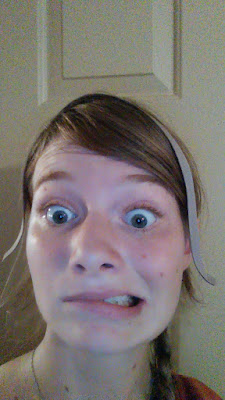 Don't I have a lovely selfie face?
Next I pinned the ribbon to the inside on the bonnet and tryed it on, in order to figure out where it should go. 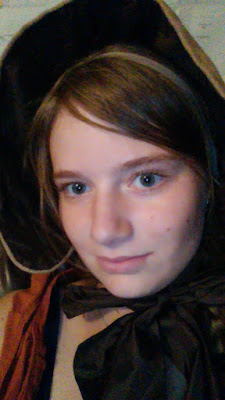 There, perfect! This bonnet isn't going anywhere! (and my selfie face is getting better!) I sewed the stay in, and then had just one more issue. The ribbon showed. I needed to hide it somehow. This must be the reason alot of bonnets had flowers on the inside of the brim. After looking at picures of origenal bonnets, and how they had flowers aranged, I decided I really liked this one from about 1840. So I ran in to Hobby Lobby to get some silk flowers. I brought them home and sewed them, and some eyelet from my stash, along the inner brim of my bonnet. 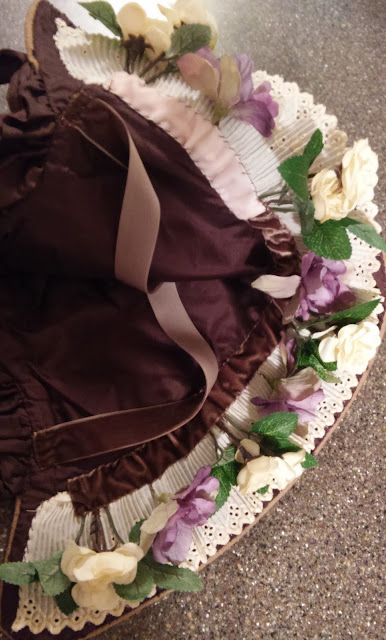 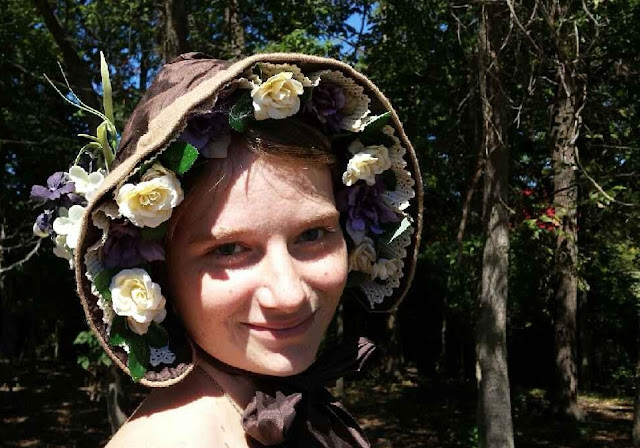 Well the bonnet was comfortable, and pretty, and it stayed on my head! 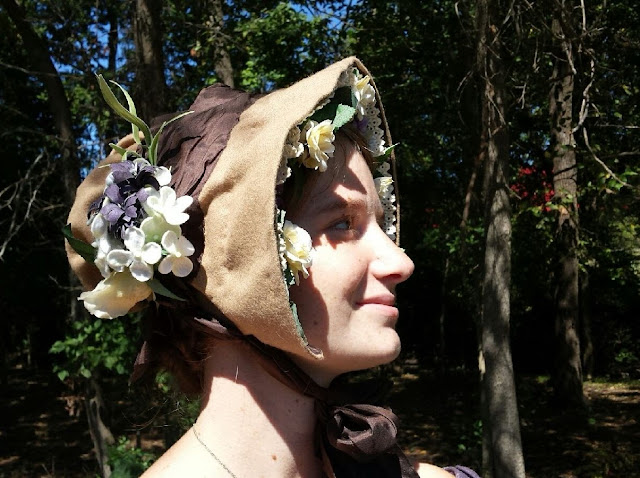 The bonnet was the perfect accessory to my dress! 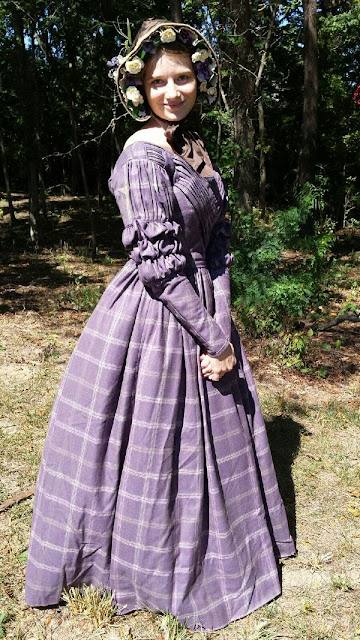 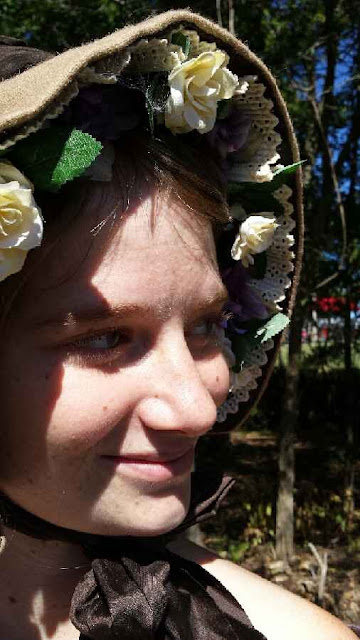 September's Historical Sew Monthly Challenge is a color challenge. Make something brown. So, I'm using my newly trimmed bonnet as my entry.

What the item is: A brown bonnet. Made last winter, but fixed to be wearable this month.The Challenge: #9 Color Challenge Brown Fabric: The bonnet is made from cotton buckram with a wool outer layer and silk liningPattern: McCalls M2951 Year: 1840-45 approximately Notions: Thread, Velvet Ribbon, Cotton Eyelet, Faux FlowersHow historically accurate is it? The materials the bonnet is made of are historically accurate, the notions not so much, as most are synthetic. The bonnet is about 90% hand sewn. So maybe 80% accurate.Hours to complete: I don't remember how long it took to make the bonnet itself, but adding the bonnet stay and flowers took about 4 hours. First worn: September 19th 2015, to the Heritage FestivalTotal cost: Can't remember for the bonnet itself, but the materials for the upgrade cost less than $10

As much as I love getting to wear my historical dresses, fall is also a busy season with goats. So back into my modern clothes and out to milk I go!

Posted by Alyssa at September 22, 2015
Email ThisBlogThis!Share to TwitterShare to FacebookShare to Pinterest
Labels: 1830s-40s, Designing, Historical, HSM, Me, Sewing