The Dress With the Gremlin Hem

I had the fabric, I had the pattern, I knew exactly what my first sewing project upon returning home would be. This dress - 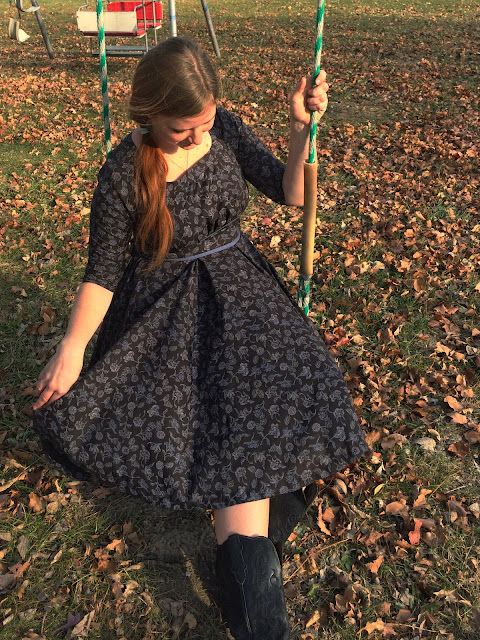 So on Black Friday afternoon, in a rather sleep deprived state, I cut the dress out. It's Simplicity S0934/8167, which I picked up at a pattern sale about a year ago specifically for this fabric. I found 5 yards of this printed rayon at a thrift store about a year before that. When I first bought the fabric I thought I'd turn it into a 40's dress using Simplicity 1587, but I just wasn't thrilled about that possibility for some reason so I put the project off. Finally, I decided to use Simplicity 1587 for my map dress and I found a Simplicity 8167 to go with my rayon. Thanks to my initial hesitation, I wound up with two different dresses I love! 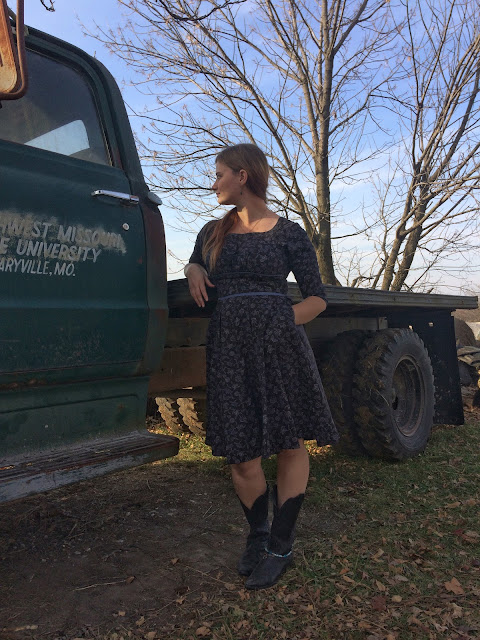 Finding the perfect pattern for this fabric, however, may have been the easiest part of making this dress! Once I got the dress cut out, the sewing took forever! First, I decided to flat fell all the skirt seams because I was too lazy to re-thread my serger that day. There are 7 panels in this skirt along with 7 godets. That's a lot of flat felling. 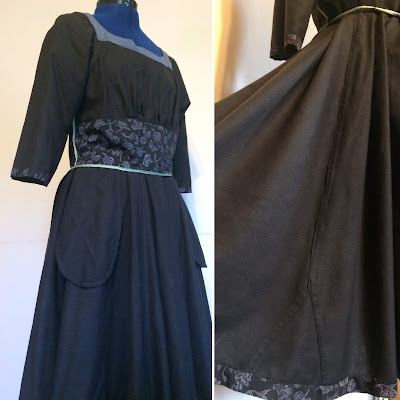 When done, those flat felled skirt seams looked fabulous! So I decided to finished the rest of the seams in this dress equally nicely. The seams that aren't flat felled are either bound seams (the waist seam and bodice side seams) or french seams (the pockets). With as beautiful as the inside of this dress was going to be, I really put the pressure on myself to make the outside of this dress equally perfect. Of course, then I ran into roadblocks. 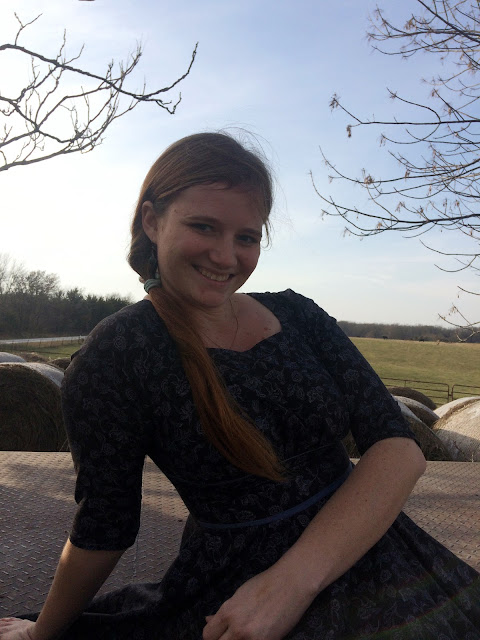 First, I discovered that the bodice was a tad too small. Thankfully, I tried on the bodice to check the fit prior to finishing my bodice seams and attaching the bodice to the skirt. So that was an easy enough fix, I just let out my side seams and back darts a bit until the fit was just right. 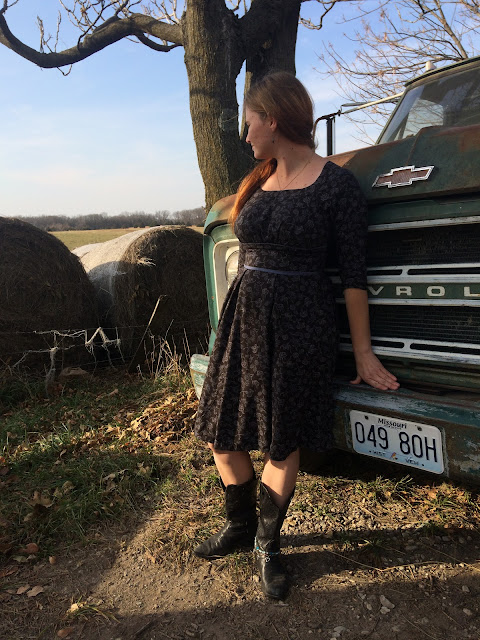 After fixing the bodice, I gathered up the skirt and sewed the two together. It looked horrible! The gathered skirt just didn't lay right and the flat piping I'd added at the waist line just didn't sit right either. So, I pulled out my seam ripper and off came that skirt! I stitched that flat piping in place exactly where I wanted it so that it would have no choice but to behave. Then I pleated the skirt and reattached it to the bodice - and it looked 1000x better than the gathered skirt did! 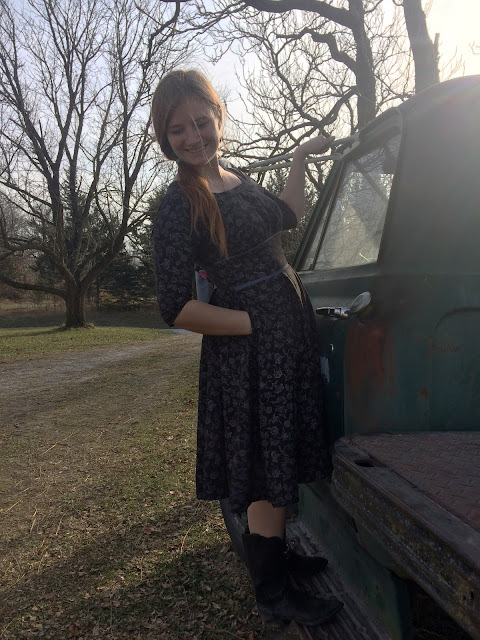 There, problems fixed! Now all I had to do was insert the zipper, finish the neckline, and hem this stubborn dress! Well, the zipper went in easily, no issues!!! Woohooo!! But then came the neckline. . .
It  was supposed to be finished with a bias binding. I had that bias binding all cut out and pinned together. It was sitting in a basket on the sewing table patiently awaiting its turn to be sewn onto the dress. Then, when the time came to sew that bias binding onto the dress itself, it had flat out disappeared! I searched everywhere for it, and it was just plain gone. I suppose, with all the issues this dress had had, and all the extra time each of those issues took, that neck binding just got tired of waiting for its turn so it ran away. 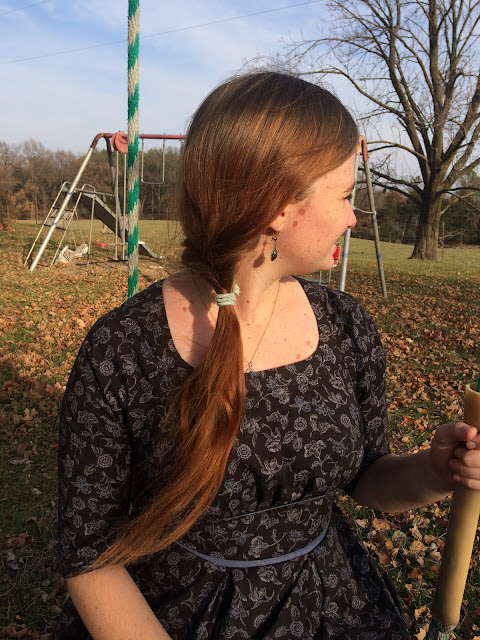 Now, I could have just re-cut out that bias binding, but I was too lazy for that. Digging out the pattern to get the measurements right seemed like a lot of work. So I drafted a yoke to finish the neckline instead. (You notice when I'm lazy I just create more work for myself?) In this instance the laziness paid off - the yoke turned out much nicer than the bias binding would have! 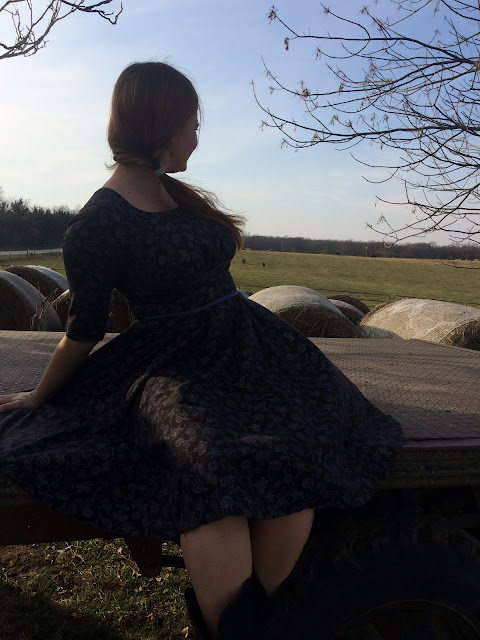 Neckline finished, I was ready for the hem - and that is where this dress went from just stubborn dress to gremlin dress. 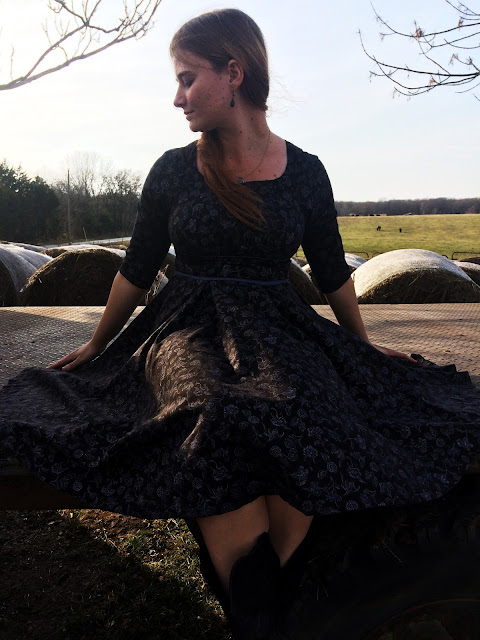 This dress has a full circle skirt. Achieved not by cutting a circle or even parts of a circle out, but rather by cutting house shaped panels and triangular godets out of my fabric. All of these pieces had a straight bottom, so that in theory you could make a circle skirt out of a border print fabric, keeping the border even all along the hem. Laid out flat, the skirt would look something like this: (only on the actual skirt all the panels are actually the same size. Please excuse my less than perfect drawing skills) 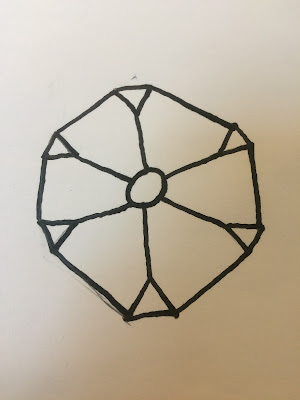 As I said, this was a nice idea in theory. In reality it led to a very uneven hem line which took several tries to be made even. 3 days went into evening the hem on this skirt. (During the whole hem frustration, I decided I needed a break. I needed to make something that actually wanted to be made rather than fighting me every step of the way. So the dress got abandoned for an evening and I made my little sister a new shirt instead.) 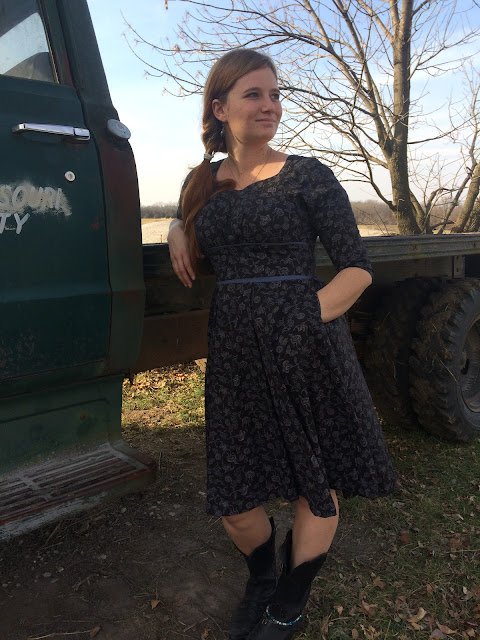 After multiple attempts of evening the hemline on my own, I finally had to call in reinforcements - my mom. Armed with my hem ruler and copious amounts of pins, my mother marked my hem all the way around while I stood still wearing the dress in the middle of the kitchen. 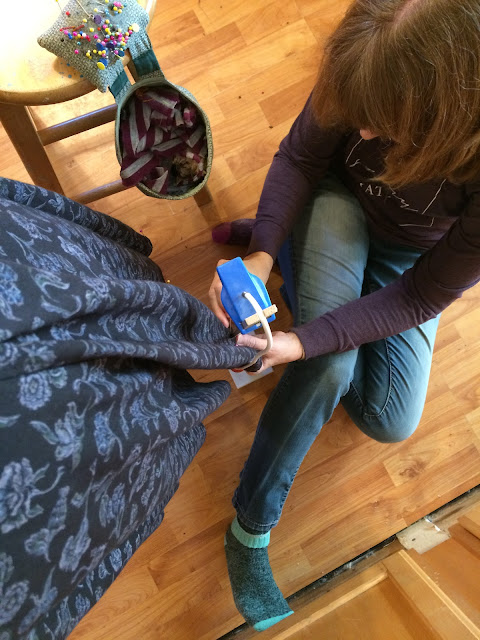 Thanks to all the fabric in this skirt, that process took over an hour, but it was worth it! My hemline was even! Now all I had to do was press up my 2 inch hem allowance and sew it! 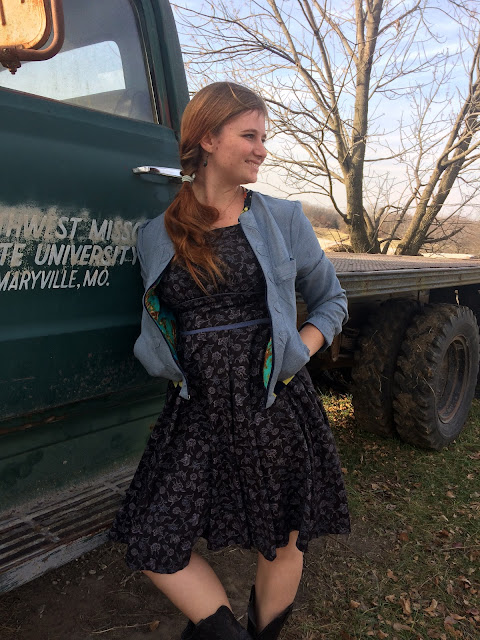 Then, wouldn't you know it? I decided to hand sew that darned hem! Well, that took a bit of time, but in the end the hem looks great, and I had a new dress to wear to church on my second Sunday home. 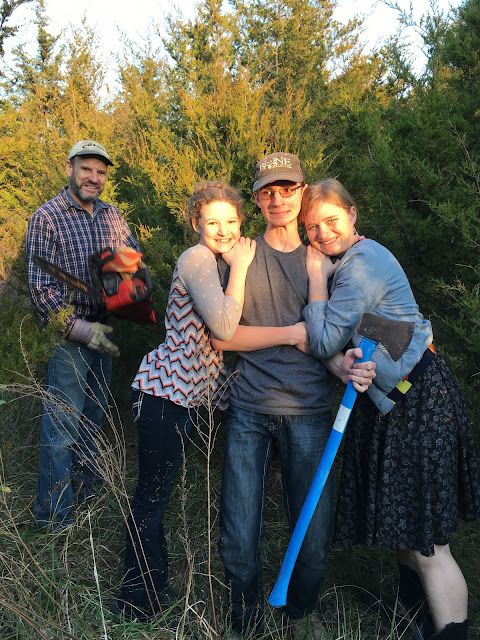 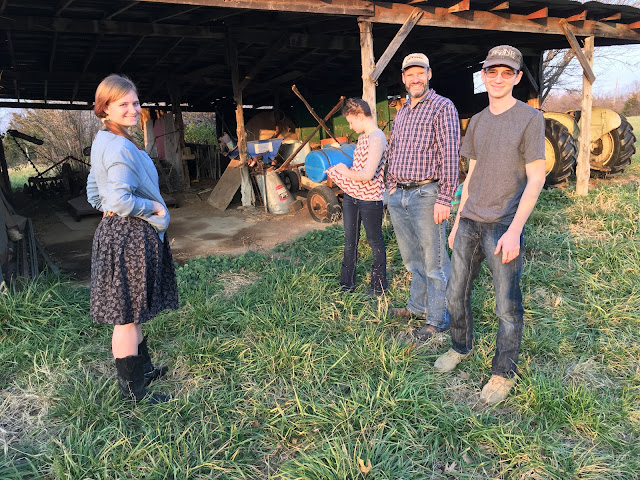 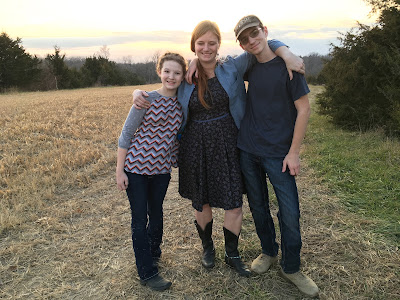 Hopefully the next item I make for myself comes together much more easily, but I'm not ready to tackle that yet. Right now, I'm working on clothes for my little sister instead - because her clothes seem to actually want to be made!

Posted by Alyssa at December 12, 2017
Email ThisBlogThis!Share to TwitterShare to FacebookShare to Pinterest