With my pink silk, fur-trimmed, Edwardian skirt done, I was ready to start on the bodice, right? Wrong. There was one more undergarment I needed to make first - a corset cover. 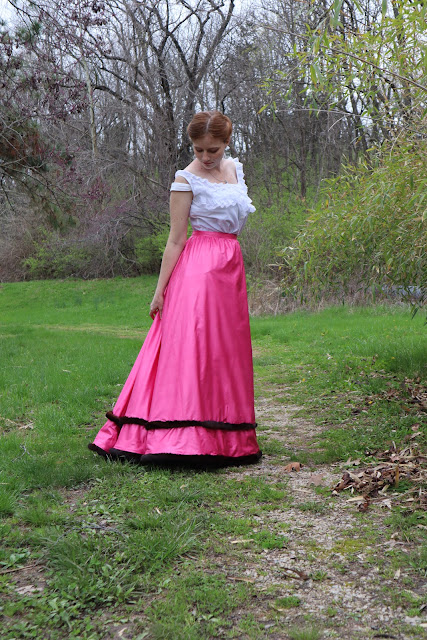 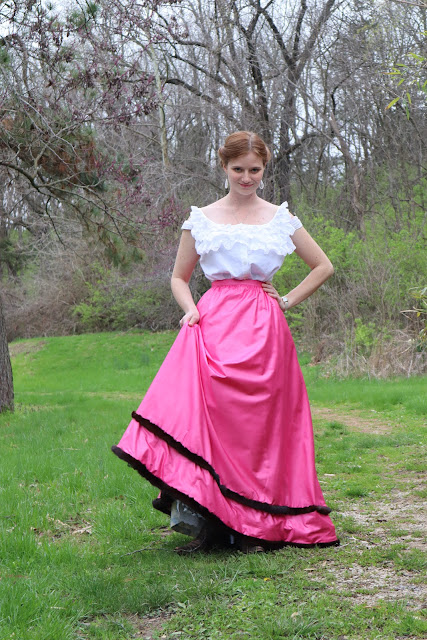 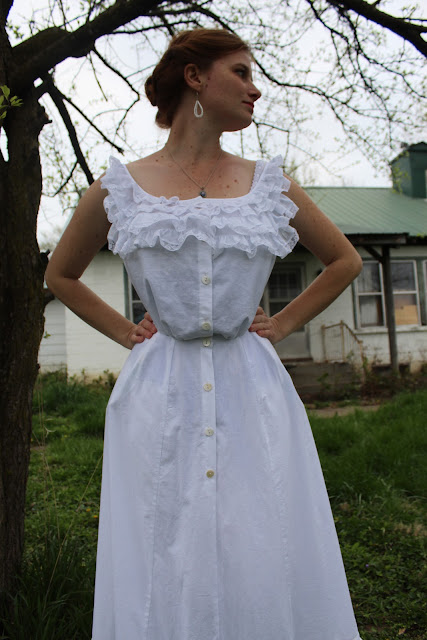 I decided to base my princess slip off this one from the first decade of the 20th century, held by the MET museum. I would add ruffles to the bodice to match the corset cover I referenced earlier, and I would be set. The perfect, pretty, and fun Edwardian undergarment. 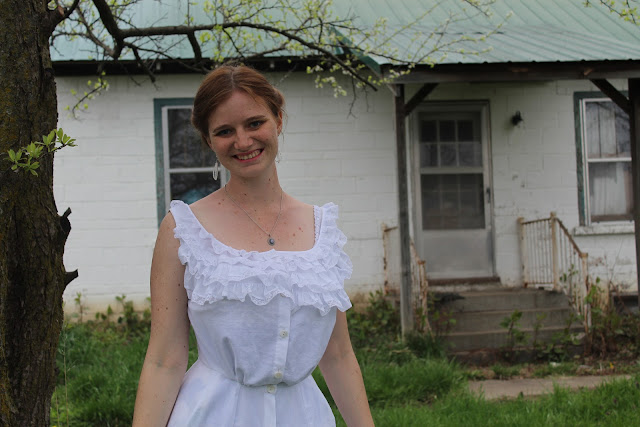 For the top half of my princess slip, I used the bodice pattern from the Wearing History 1910 combination pattern. This bodice has just the perfect pigeon-breasted silhouette for the Edwardian era, and I already had the pattern in my stash thanks to a sale Wearing History had last fall. 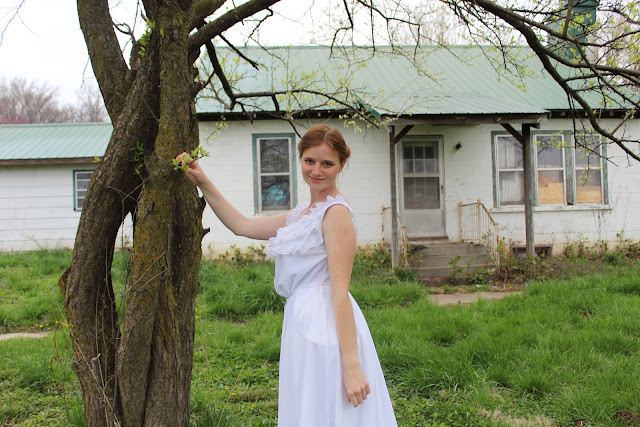 This pattern is a digitized version of an actual 1910 pattern, and as such is only available in one size - a 36" bust. As I have a 37" bust, this was almost perfect for me so I made no adjustments. However, I don't think the pattern would be too hard to resize using the slash and spread method to add or subtract a few inches from the bust. 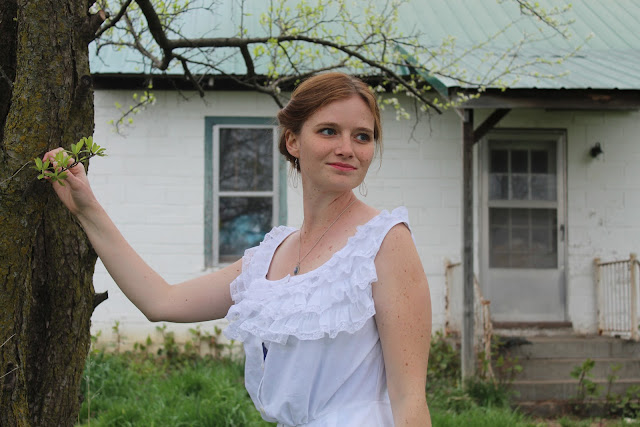 Since this is a relatively loose fitting garment, and the pattern was about my size, I didn't bother making a mock-up. Not recommended practice, but in this instance it worked out, the bodice fit perfectly, and I have no regrets. Had this been a more fitted garment, and something other than underwear, I definitely would have mocked it up first. 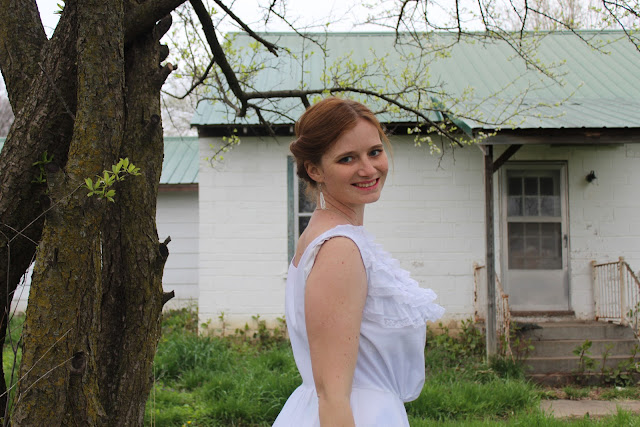 I made the bodice (and later the skirt too) from plain cotton muslin. The ruffles were then made from cotton organdy trimmed in vintage cotton lace. 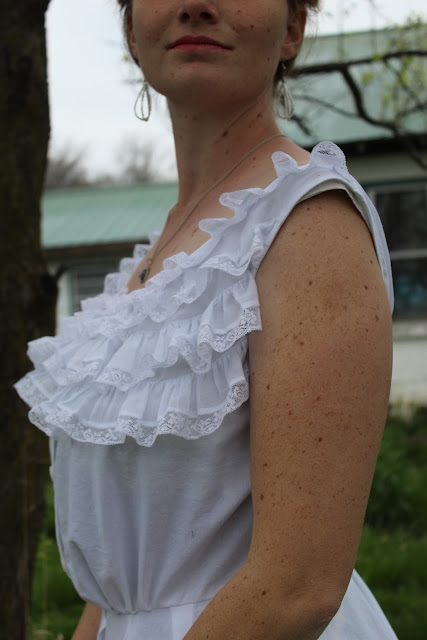 I had a hard time figuring out exactly how to neatly attach the organdy ruffles to my bodice. Eventually, I decided to use this method of gathering with cotton cording. 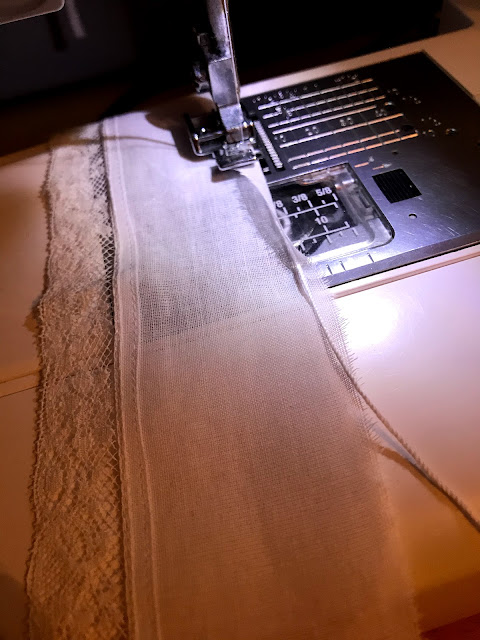 The upper edge of each ruffle got folded over a length of cotton cord, and sewn as if I were making piping. 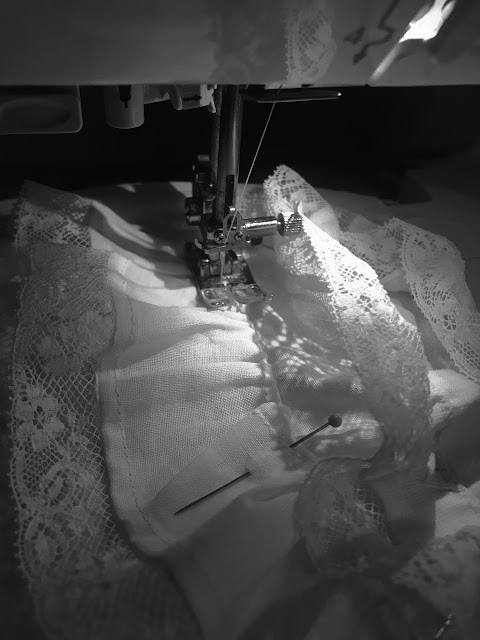 The ruffles then got gathered up with the cord and I used a zigzag stitch to anchor them to the bodice. 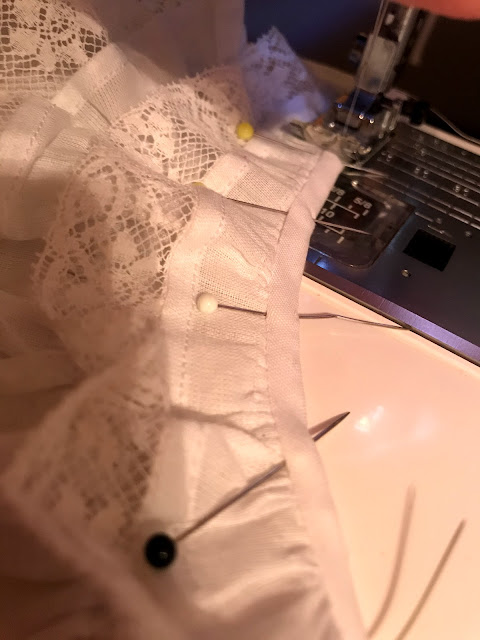 The neckline and armscyes were bound in plain old bias tape, and then the bodice was done. 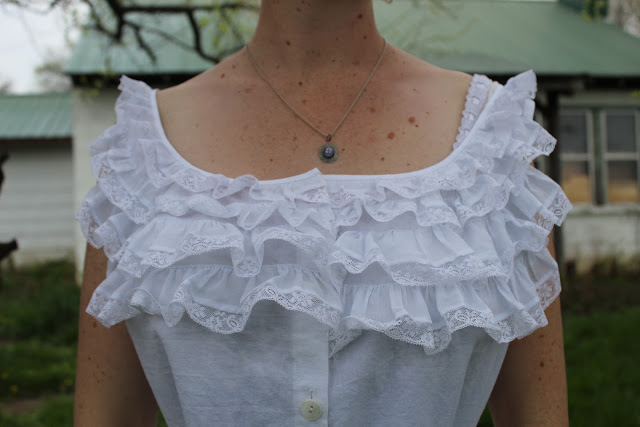 Ruffled to perfection, and ready to be attached to the skirt! 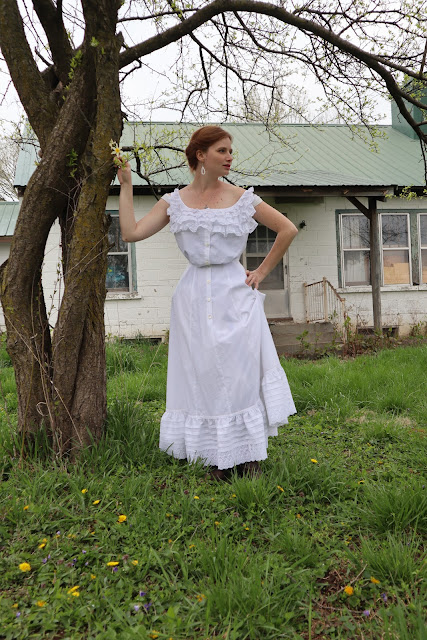 For the petticoat portion of my slip, I drafted up a simple 7-gore skirt pattern from the Dover book 59 Authentic Turn-of-the-Century Fashion Patterns. I used the pattern on page 128. 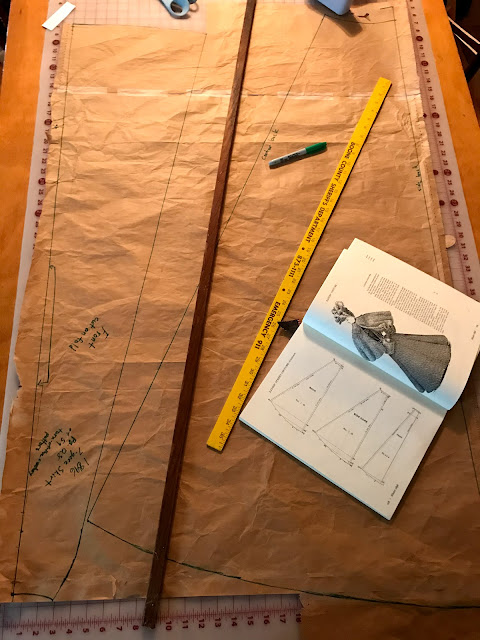 I've found the patterns in this book to be very easy to use, and this skirt pattern was no exception! 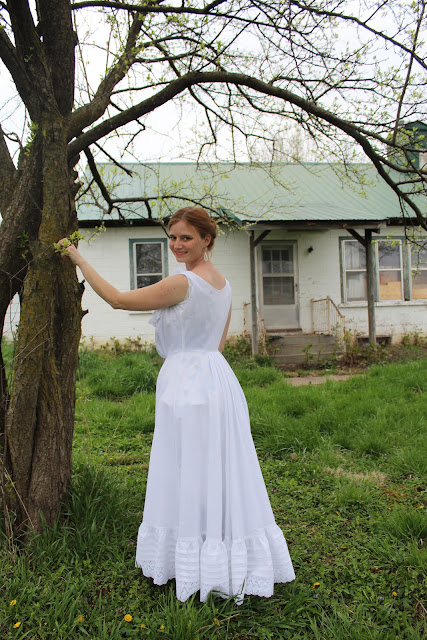 Once again, it would have been advisable to make a mock-up once I was done drafting this pattern. However, as I was just using it for a petticoat and it already appeared to be about the right size, I didn't bother with a mock-up. Just like with the bodice, no regrets here, it turned out just fine. 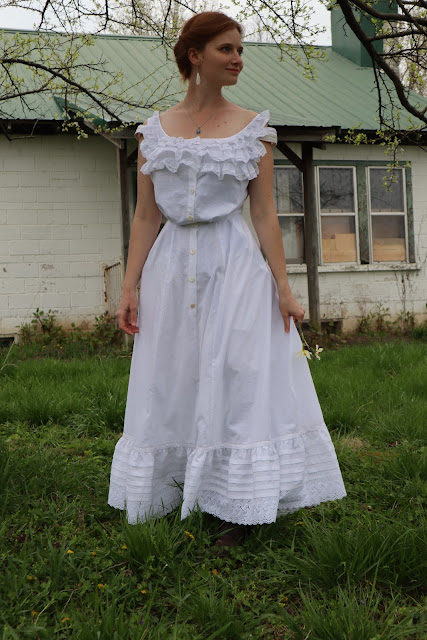 I knew how long I wanted my petticoat to be, and I knew I wanted a 12" wide lace trimmed ruffle at the bottom, so I used this information to cut my pattern pieces to the correct length before cutting into my fabric (cotton muslin, just like the bodice). 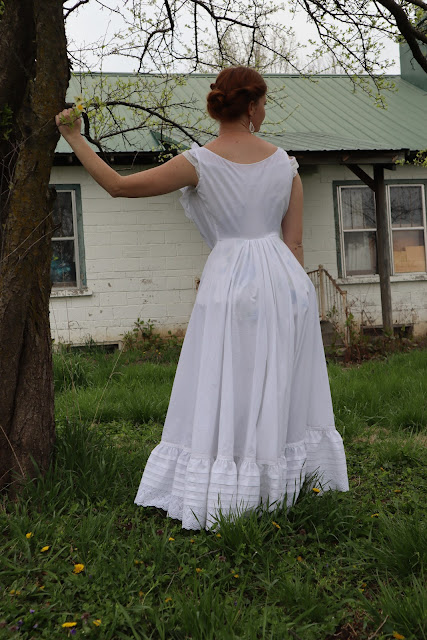 The 7 gores of the skirt were all sewn together with french seams, and I left the top several inches of the center front seam open for the button placket. 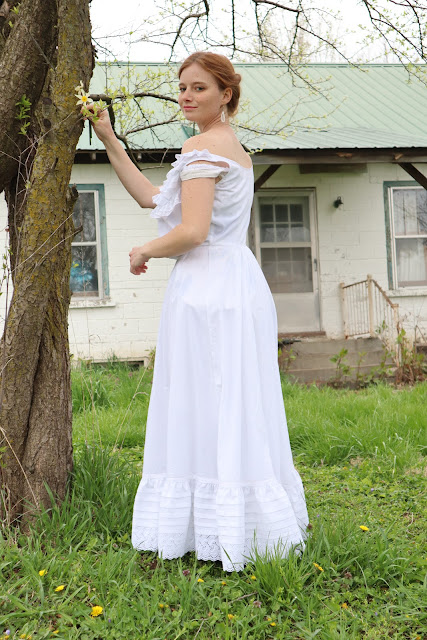 I then took a wide strip of muslin, sewed in 4 wide tucks for decoration, and finished the hem with some pretty paisley 100% cotton eyelet I found at Hobby Lobby. (I was super excited to find 100% cotton eyelet, as most eyelet I find is a poly cotton blend!) 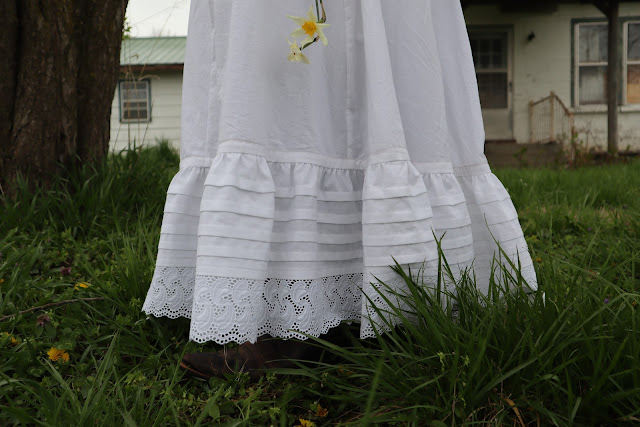 The tucked and eyelet trimmed ruffle was then gathered up and sewn to the bottom of the skirt.
The skirt and bodice of my princess slip were now ready to be sewn together! 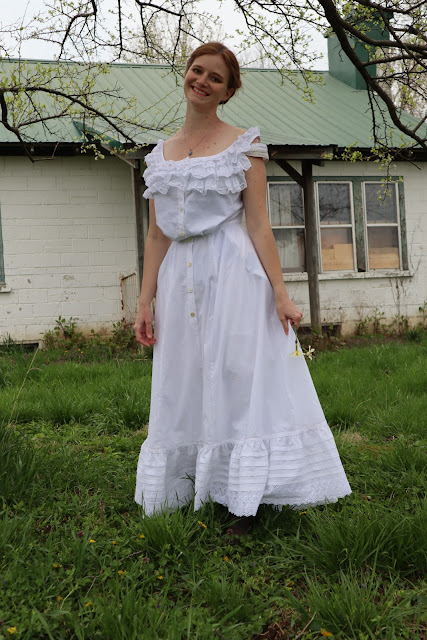 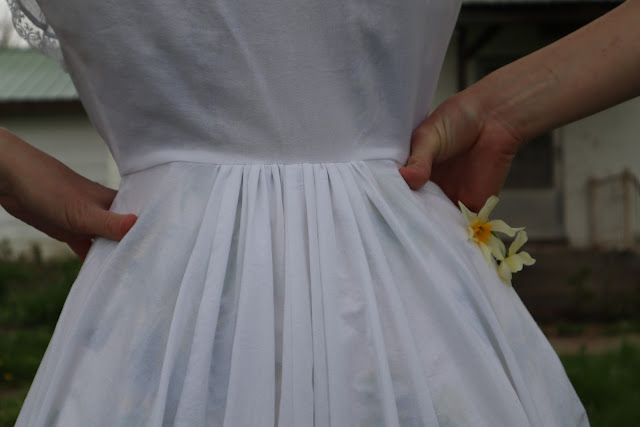 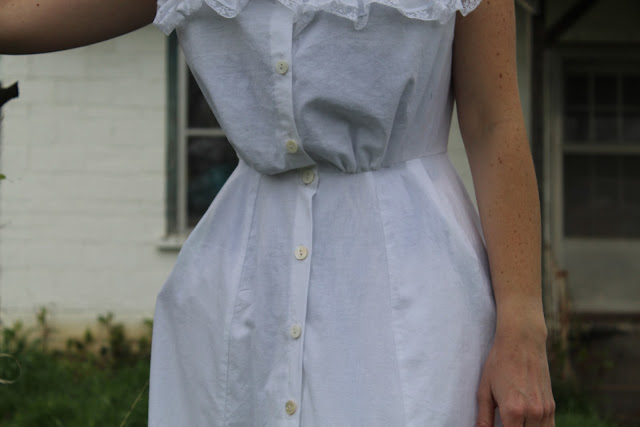 The two were sewn together with a french seam. 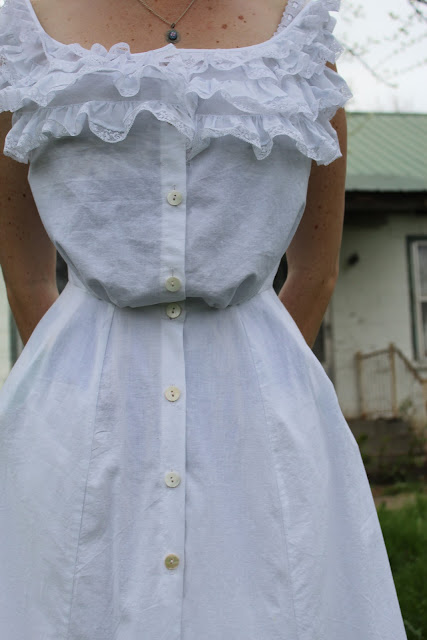 Finally, my princess slip was finished with buttons down the center front. 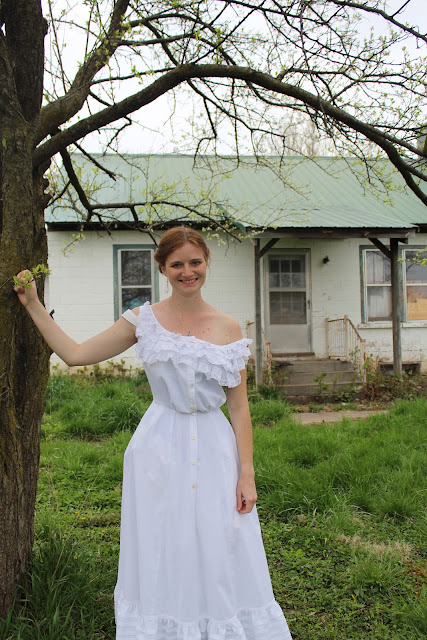 And with that, my princess slip was done! 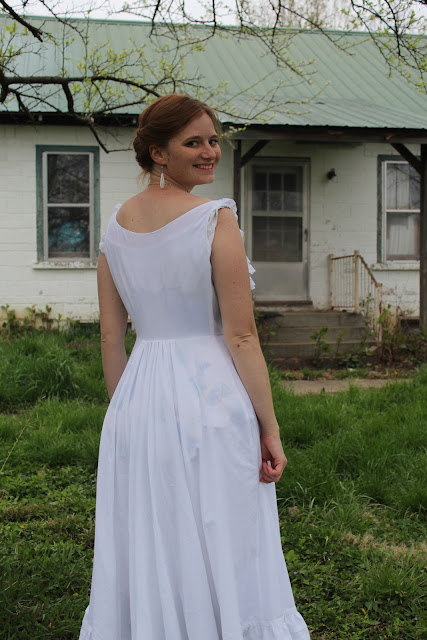 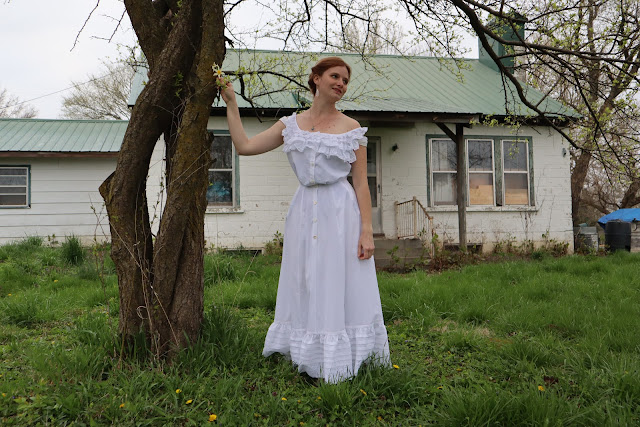 Yes, it was more work than just a corset cover would have been, but it was absolutely worth it! 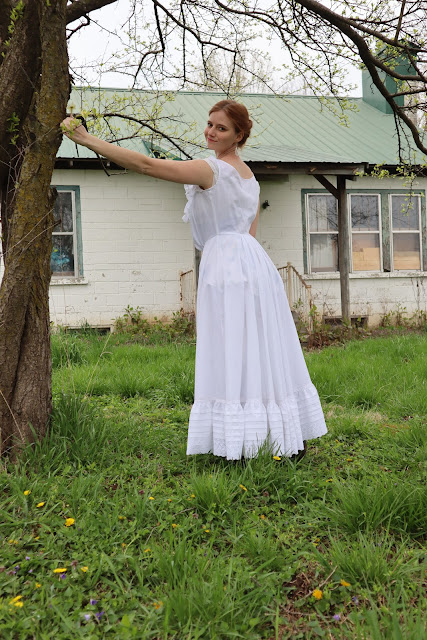 I enjoy wearing this slip and look forward to making all sorts of Edwardian ensembles to wear it under! 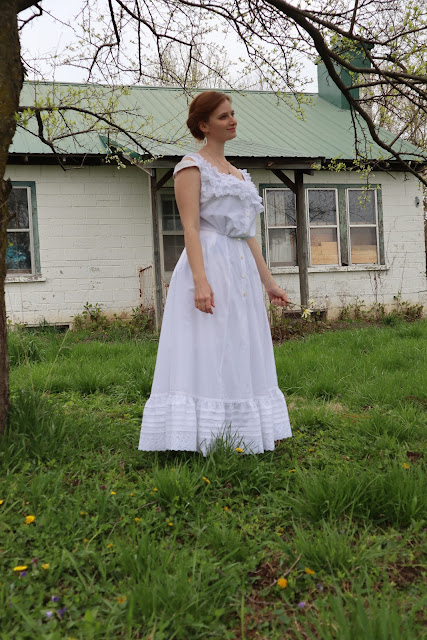 What the item is: Edwardian Princess Slip
How it fits the challenge: It's a base layer to be worn under multiple different ensembles from the first decade of the 20th century.
Material: Cotton Muslin, Cotton Organdy.
Pattern: Wearing History 1910 combination bodice, combined with a skirt pattern from 59 Authentic Turn-of-the-Century Fashion Patterns.
Year: 1900-1910
Notions: Thread, buttons, cotton lace, cotton eyelet
How historically accurate is it? The patterns are accurate. My material choices aren't bad, just perhaps a touch heavier than they would have been in the era. The construction methods are just what made sense to me, rather than researched historical methods. This would have been recognized in the era, though I've not seen any historical examples of princess slips with ruffled bodices like I did here. So, let's say 75% accurate
Hours to complete: I have no idea. I finished it in about a week, working on it a few hours every evening. Probably 8-10 hours total, including patterning.
First worn: Just for pictures 4/5/20, as the event I was supposed to wear it to that day was canceled.
Total cost: The muslin was gifted to me by someone de-stashing. Same with the lace. The buttons were bought in bulk years ago. The organdy was left over scraps from another project. I spent about $5 on the paisley eyelet. So, $5? 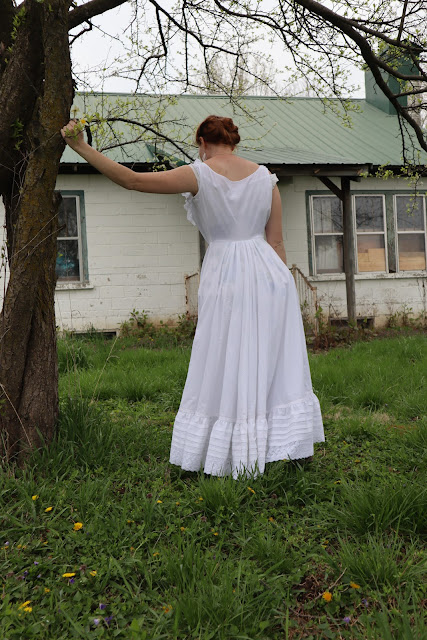 Posted by Alyssa at May 24, 2020
Email ThisBlogThis!Share to TwitterShare to FacebookShare to Pinterest
Labels: 1900's, 1901 Evening Gown, Costume, Edwardian, Historical