A Brocade Victorian Waistcoat for my Husband

Of course I have plans for my husband to dress up in historical clothing with me. How could I not?!?!? 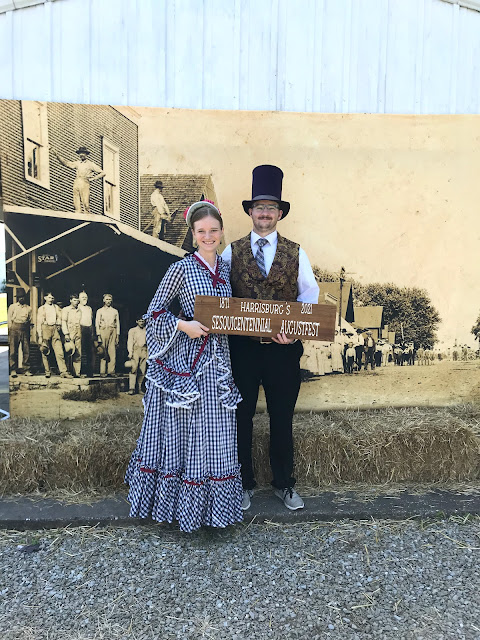 Thankfully, he is fully on board with this plan! I just need to make him the clothing. By now I thought I'd have at least one full suit made for him, something from the 19th century. . . but there's this thing called time. Somehow sewing dresses for myself, my sister, and my niece has taken up the time I've had to sew for the most part, thus, my husband of (almost!) 5 months still lacks a full Victorian suit. One of these days I will change that, but for now. . . 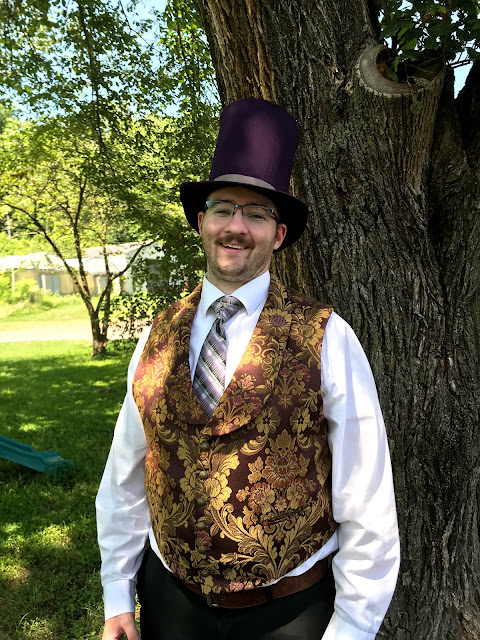 He does have a waistcoat! I made it for him over the summer as a birthday gift. 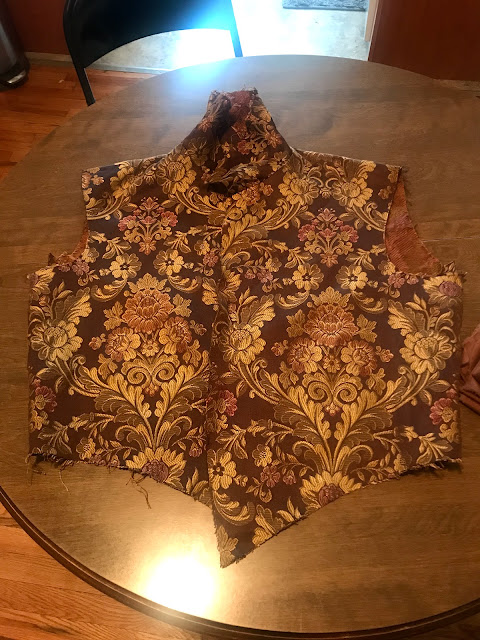 It started as a partially assembled renaissance vest, or doublet, or something, given to me in a tub of fabric by someone who used to be very involved in the SCA. I thought the colors in this brocade would go very well with the purple top hat I made my husband for Christmas last year. (Who cares if the purple top hat is not historically accurate, it's getting worn with anything 19th century I make for my husband!) 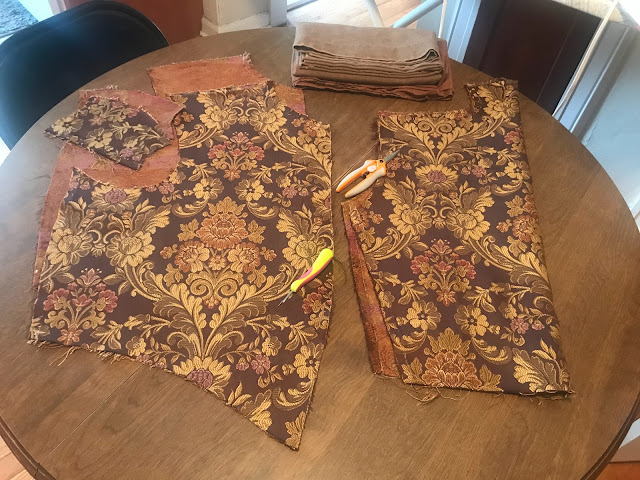 I began by disassembling the whole thing so I could re-cut it using a Victorian pattern. 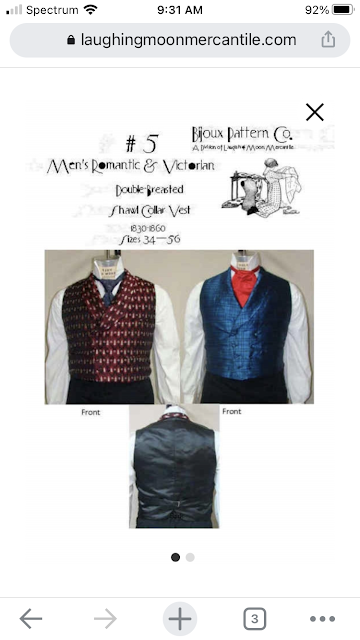 I used the Laughing Moon (or Bijoux Patterns, as this one is labeled) Men's Romantic and Victorian Double-Breasted Shawl Collar Vest pattern as my starting point. I've used this pattern several times for my youngest brother (the most recent version can be seen in this post) so I'm familiar with how it goes together and confident in the results it gives. 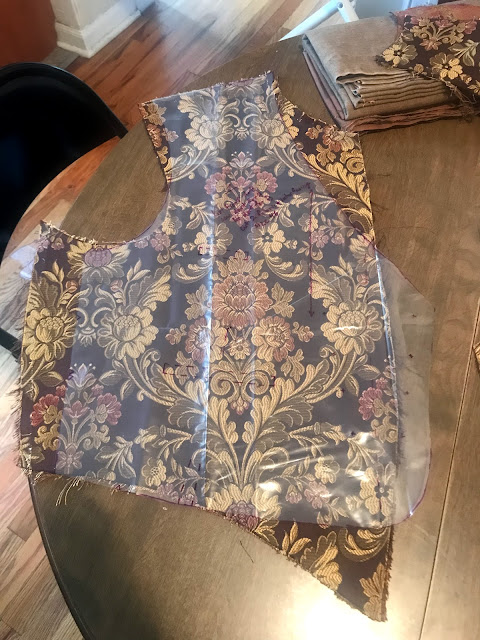 I laid out the pattern pieces I'd traced off in my husband's size over the pieces of the renaissance vest I'd ripped apart. The double-breasted front pattern pieces were a bit too wide to fit on the front pieces front pieces of the vest, so after looking at extant 1850's brocade vests online I decided to adapt to the pattern to be single-breasted. 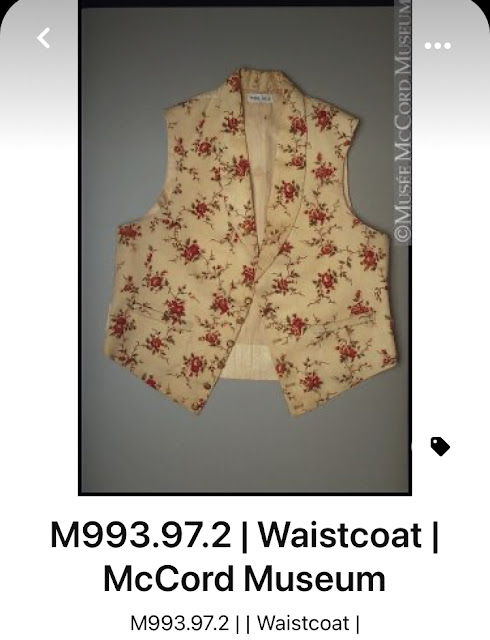 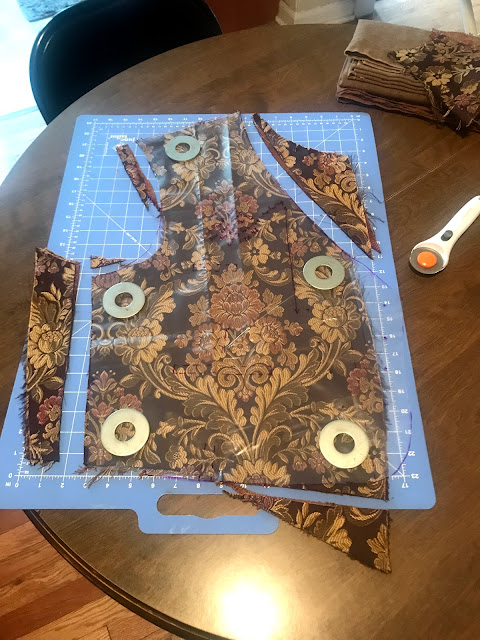 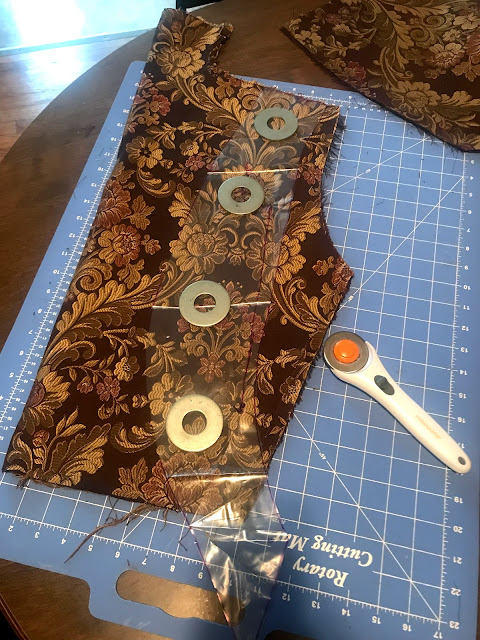 I adapted the collar piece to fit the new single-breasted fronts. 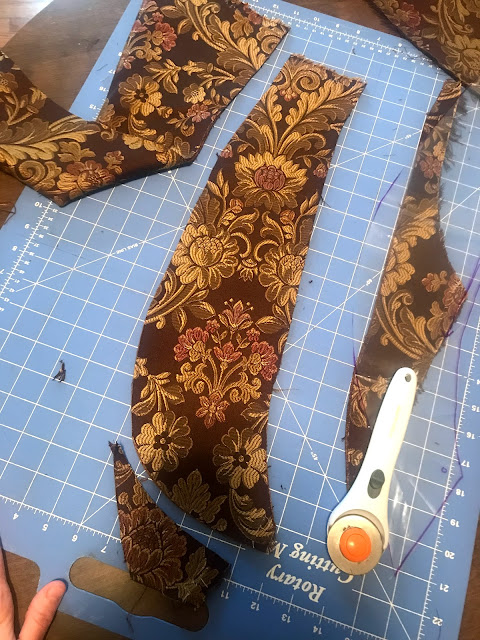 I cut the backs and linings out of some plain brown broad cloth from my stash and the facings from a brown linen-looking fabric, also from stash. 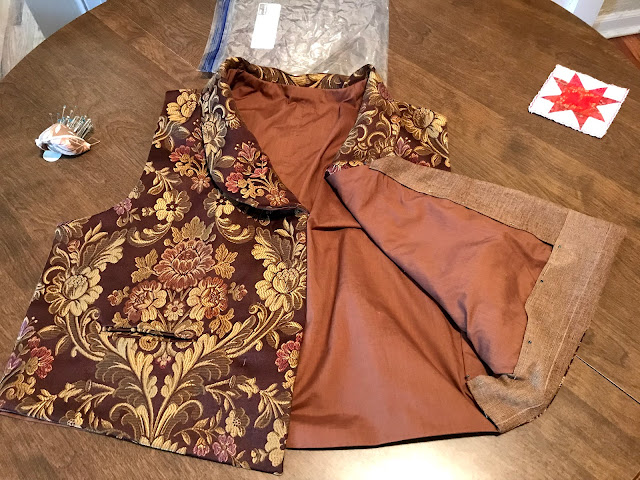 For the closure I chose some metal buttons I bought in Japan two years ago. 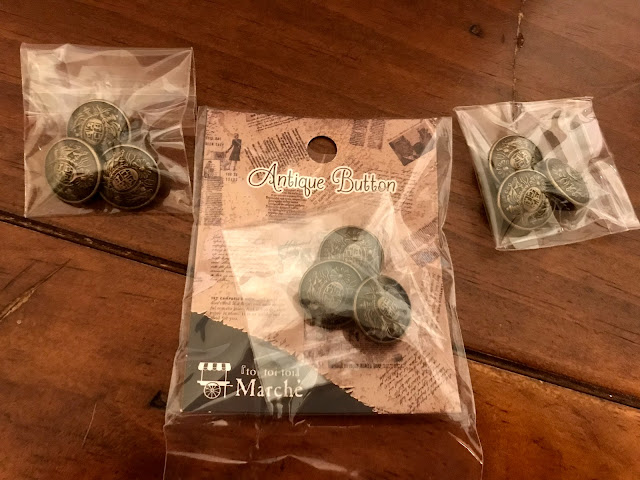 I finished all the hand sewing on the vest on my husband's birthday. 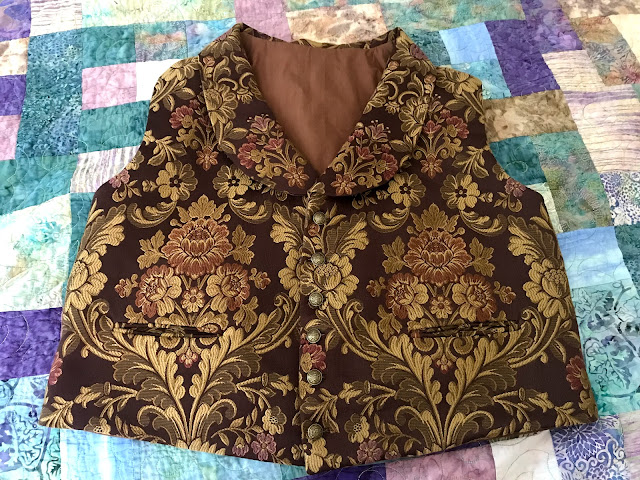 I stuffed the pockets with his favorite candy, wrapped it up, and gave it to him that evening. 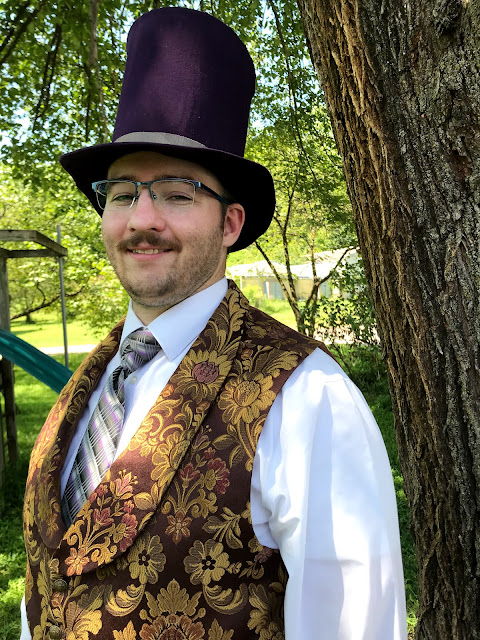 He loved that I'd made it for him! There was just one minor issue. The vest was considerably too short. It ended above the natural waistline.
I'd run into this issue with the pattern when I made the vests for my brother. My brother, however, has always been in the smallest sizes this pattern offers, so I just assumed the smaller sizes were drafted shorter because the pattern company assumed smaller men would also be shorter men. Well, I was wrong. If the smallest sizes were a little short, the larger sizes were very short. I was going to have to figure out a way to lengthen this vest if I didn't want my husband looking ridiculous while wearing it.
(And yes, mid-19th century menswear featured a higher waistline than modern menswear does, but even taking that into account, the pattern was still too short for my 6'1" husband and almost 6' brother.) 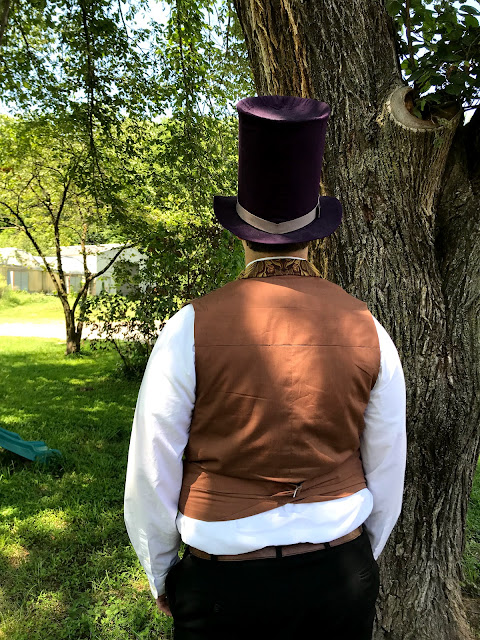 After a bit of brain storming, I came up with a plan. In the bins of fabric I was given by the SCA people I found a bit more of the brocade the vest was made from. 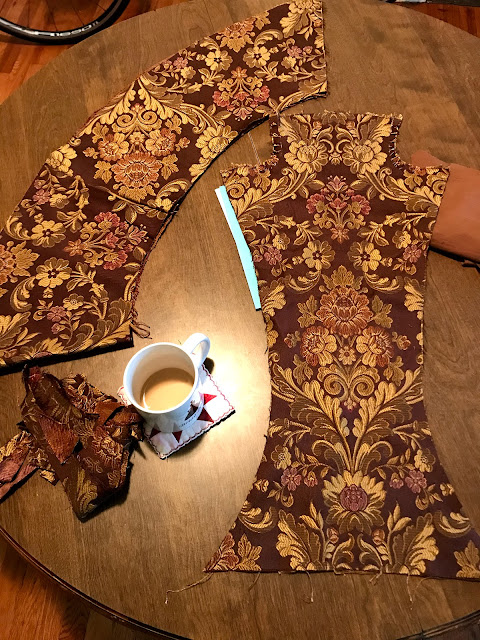 I seam-ripped apart the shoulder seams and added several inches of fabric there to lengthen the vest as un-obtrusively as possible. 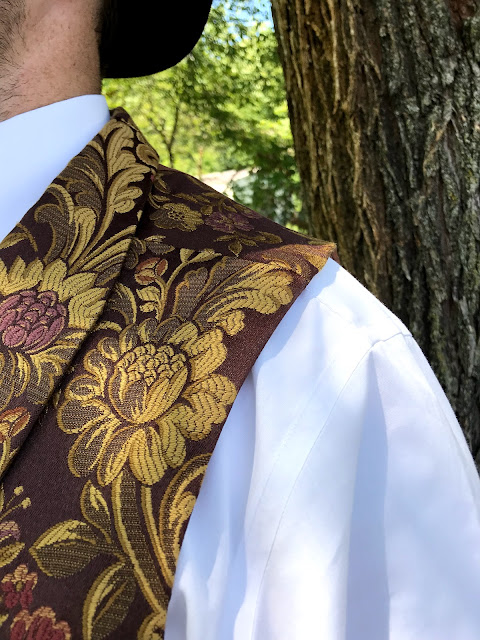 I added the same amount of length to the back of the vest by cutting straight across the back from armhole to armhole and inserting a strip of fabric there. 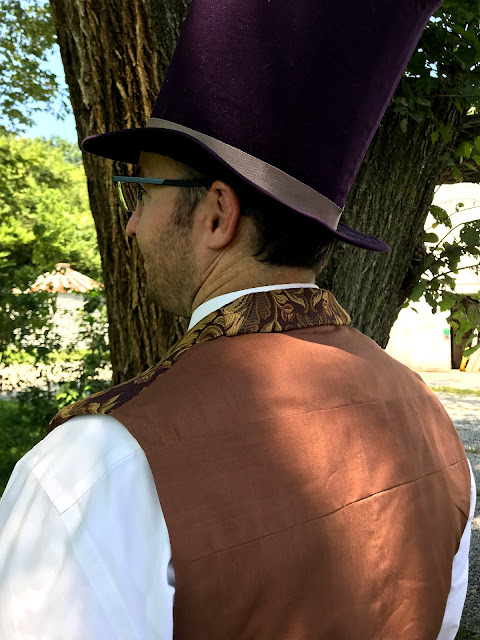 To make the collar fit the lengthened shoulder straps, I added a strip of fabric to the center back, then stitched everything back together. 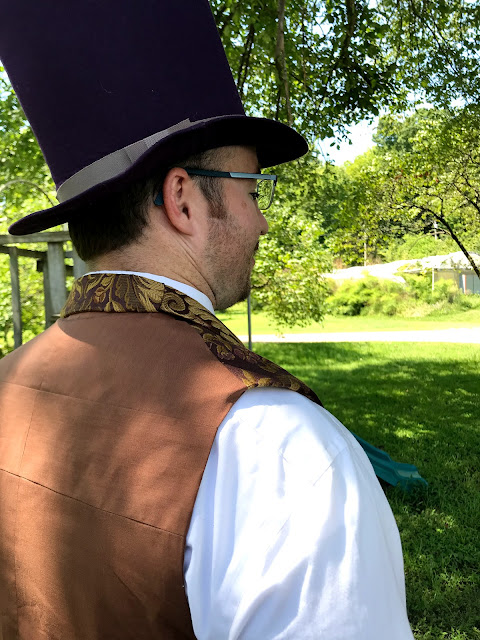 The adjustments only took a couple hours one afternoon and now the waistcoat fits pretty darned well! 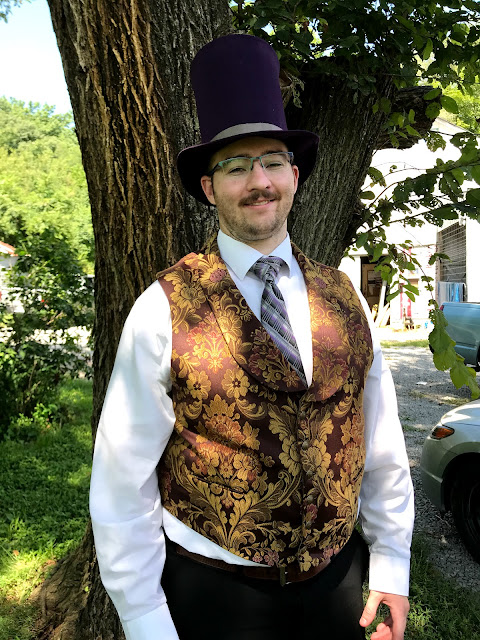 He wore it for the 150th anniversary celebration of the little town we've been going to church in on the weekends we go visit my parents. 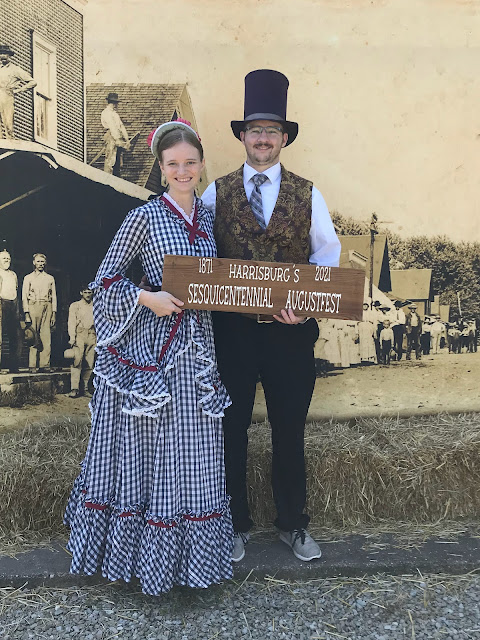 It pairs with his top hat pretty darned well! 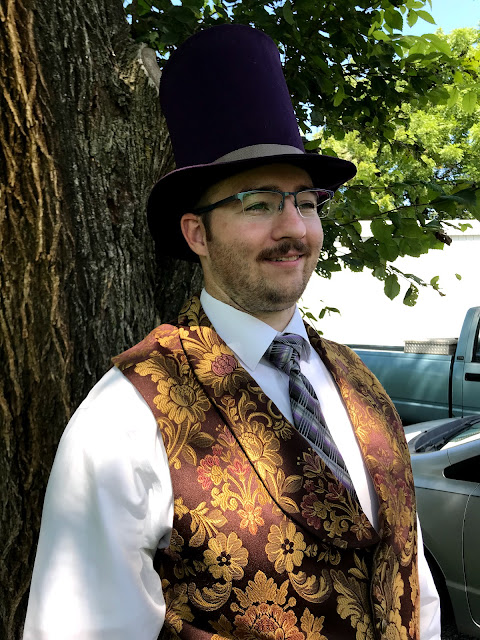 This pairing is making another appearance this weekend as part of my husband's Halloween costume! 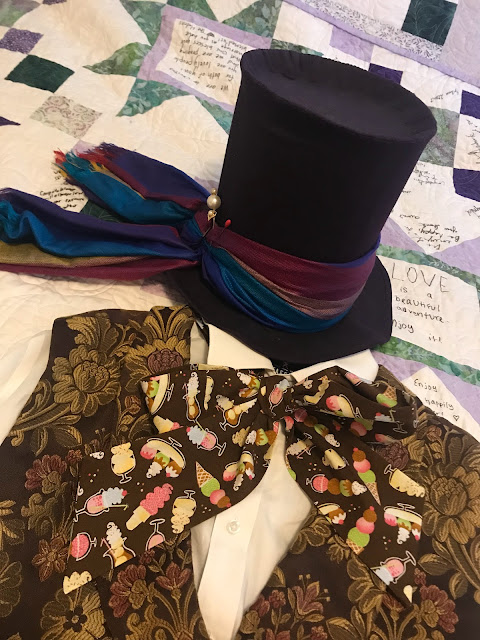 Any guesses what he's dressing up as????
Since I made this waistcoat from a previously started vest of another era, I'm using it as my entry for the Historical Sew Monthly challenge #4 The Costumers New Look.
What the item is: 1850's WaistcoatHow it fits the challenge: It's made from a previously cut out and partially assembled Renaissance vest. I re-cut and assembled it to fit my desired time period.Material: Cotton brocade, poly/cotton blend broadcloth, some sort of synthetic linen-look fabric.Pattern: Laughing Moon Men's Romantic and Victorian Double-Breasted Shawl Collar Vest pattern, with alterations to be single-breasted.Year: It will work for 1830's-50's impressions.Notions: Thread and metal buttons.How historically accurate is it? The cut and overall look are good. The materials aren't exact. The construction is mostly machine done, which isn't accurate for the era. I'd say about 50%.Hours to complete: I don't know, I made this months ago and didn't really keep track. I started and finished it within a 4 day time period, sewing a couple hours each day, then went back later and did a couple hours more work to get it to fit right, so maybe 10-12 hours total.First worn: August 23, 2021Total cost: The fabrics were all given to me free of charge by someone who was de-stashing. I spent $2 a couple years back on the buttons that were used. The thread came from stash, and as this didn't use too much thread I'll add $1 for that, for a grand total of $3.
Posted by Alyssa at October 30, 2021
Email ThisBlogThis!Share to TwitterShare to FacebookShare to Pinterest
Labels: 1830s-40s, 1860's, Costume, Historical, HSM, Pattern Hack, Sewing, Sewing for Boys, Victorian