Plain, But With a Touch of Gold

I suppose I just wasn't making her clothes fast enough. A few months ago my sister took it upon herself to make some summer skirts. Pretty, comfy, colorful, easy to make, easy to wear, elastic waist skirts. 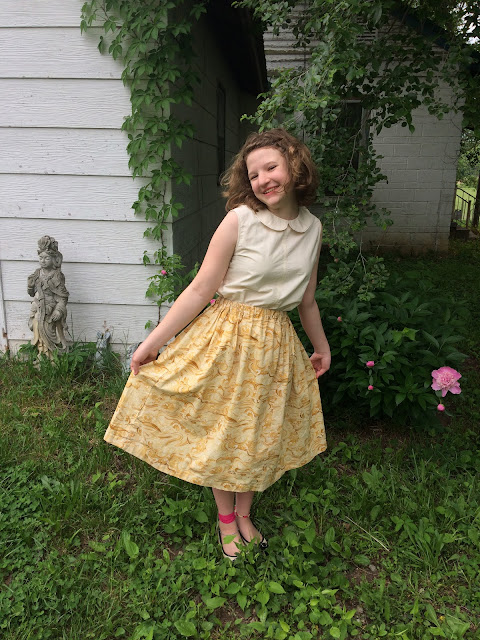 Over a three day period she made several of these skirts for herself, in all different colors and prints - blue, green, yellow, pink, and brown, polka dots, swirls, and florals. 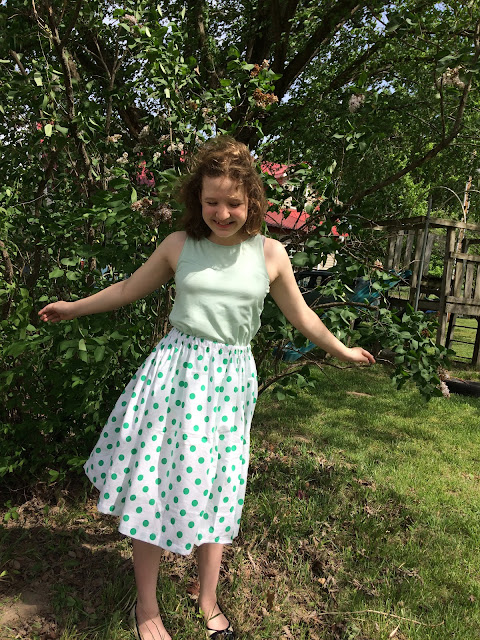 She enjoyed making all of them, and loved all the fabrics she used for her project, but her favorite of all the skirts was a golden yellow one printed with a wave like design. 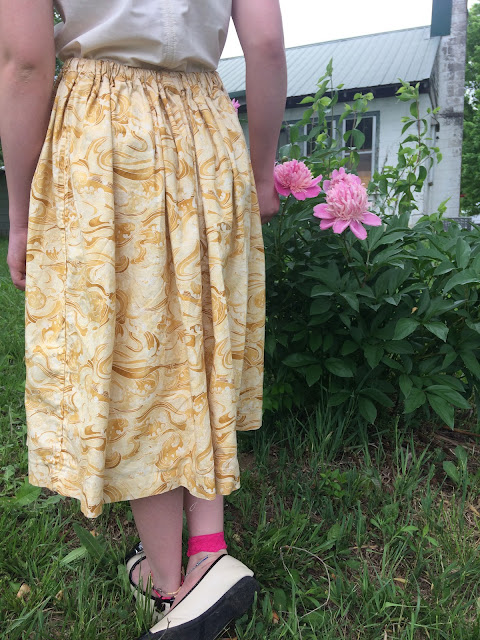 She declared the fabric reminded her of Asia, and she wanted to wear this skirt to her Mulan theater camp auditions. She just needed the perfect cream colored blouse to go with it. 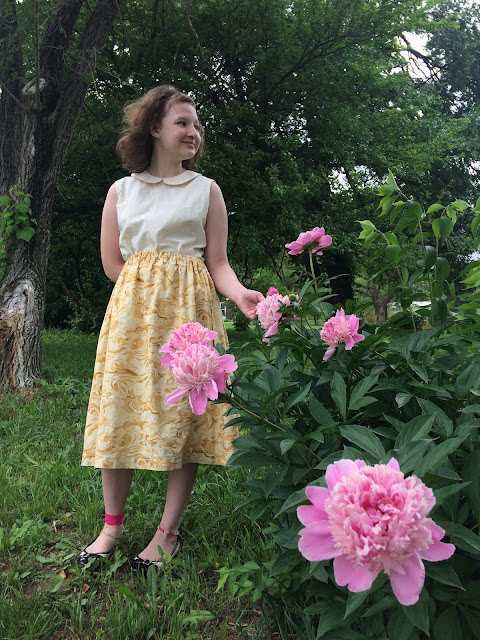 That's where I came in. My sister hatched her plan and brought me her request. A very plain, cream colored, sleeveless blouse. She wanted the print of her skirt to shine, and the best way to do that was to make the blouse as plain as possible. 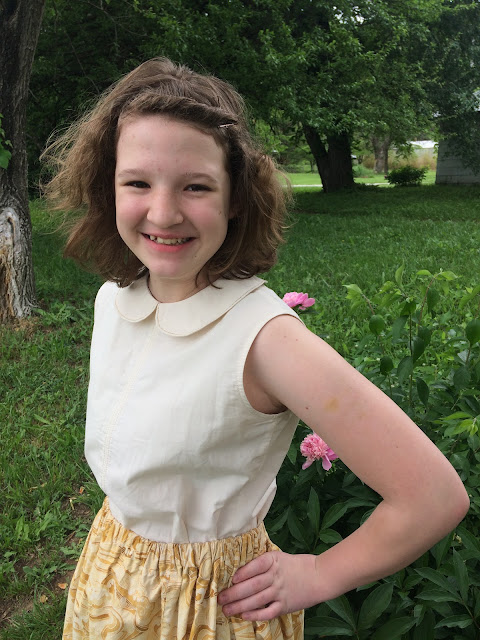 I agreed to her plan, with the stipulation that she would give me a little bit of artistic freedom. Let me add a few little details to this garment! After all, plain, detailess, monochrome garments aren't the most fun thing to make! My sister grudgingly agreed, picked out a remnant of plain cream cotton muslin at Joann's, and let me get to work. 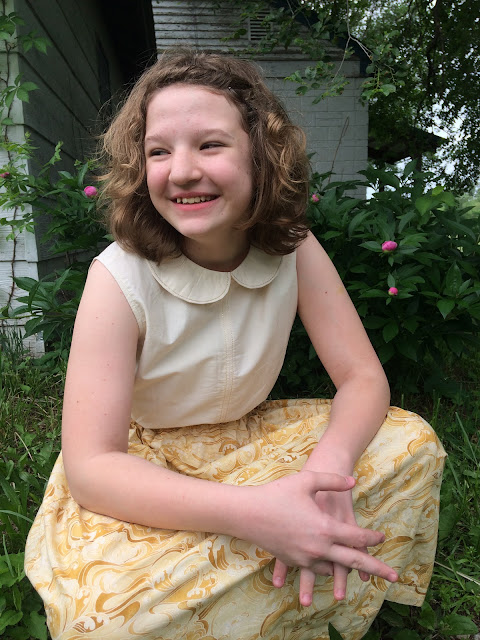 The blouse request came the week after I'd finished testing the Maria Blouse, and the pattern was still out on my sewing table. As it was a blouse pattern, that fit my sister well, I decided to use it for my base. This time I would make the plain shirt body version, rather than the peplum version, of the pattern. 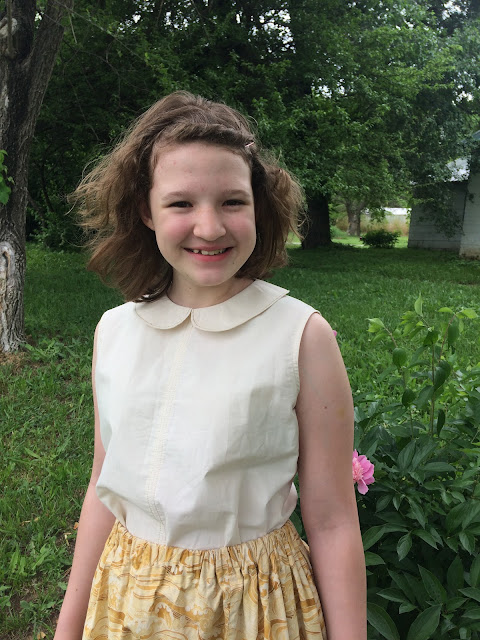 To make this blouse as plain as possible, I omitted the front buttons. My sister didn't want buttons. Instead, I sewed up the center front with one solid seam. 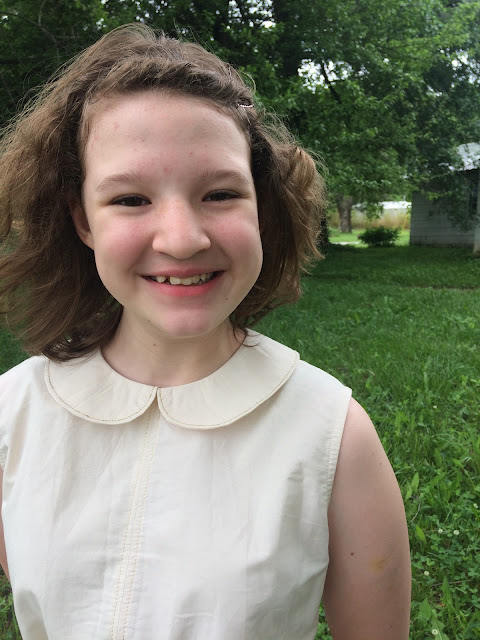 For a bit of subtle detail I added metallic gold top stitching on either side of that center front seam. My sister was unsure of the topstitching at first, as she was afraid shiney gold would detract from the skirt the blouse was to be paired with. However, once it was done, she agreed I'd made a good decision. 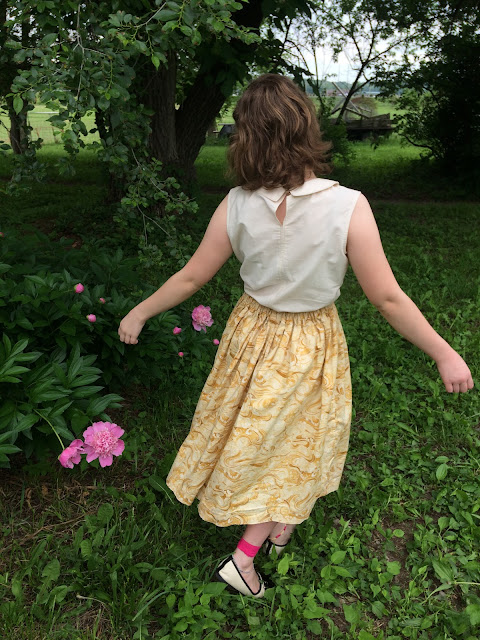 Since the blouse didn't button in the front, it needed some sort of back closure so it could actually be worn. The neck hole on it's own would be too small to fit over a head! Thus, I cut the back as two seperate pieces, rather than one on the fold. I sewed up the center back and left the top three or so inches open. I added a button and loop at the neckline, and there you go, a back keyhole opening, allowing the blouse to be easily put on and taken off. 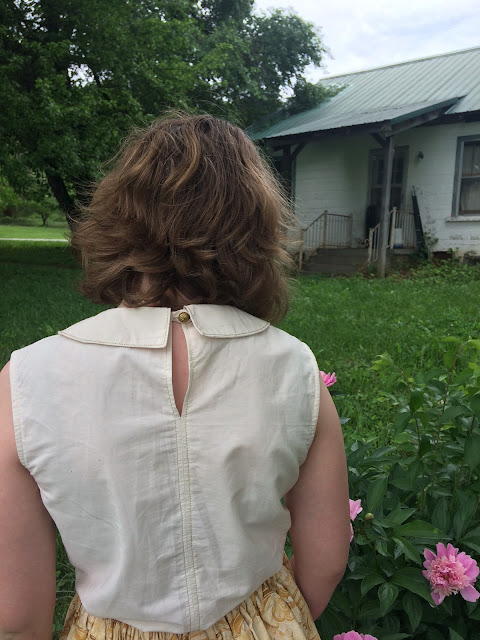 Of course, I added metallic gold top stitching to the center back seam to match the front, and my sister didn't complain. 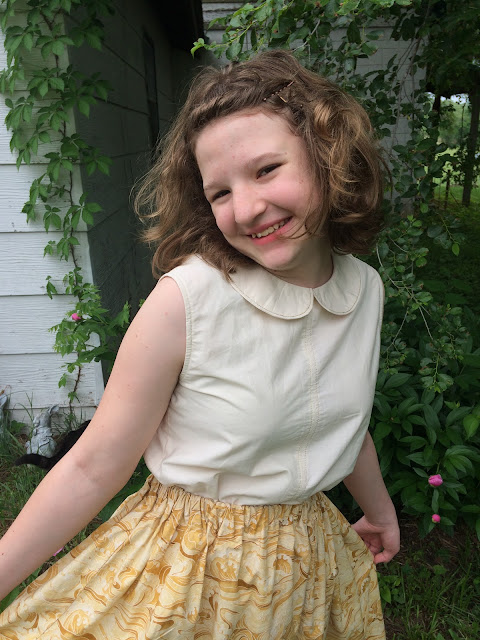 I left off the sleeves entirely, and insead finished the armholes with bias tape. Finally, for one last little detail, I persuaded my sister to let me add a peter pan collar to her pretty plain cream blouse. I topstitched around the edge of the collar with gold to match the center front and back. My sister didn't seem to mind. 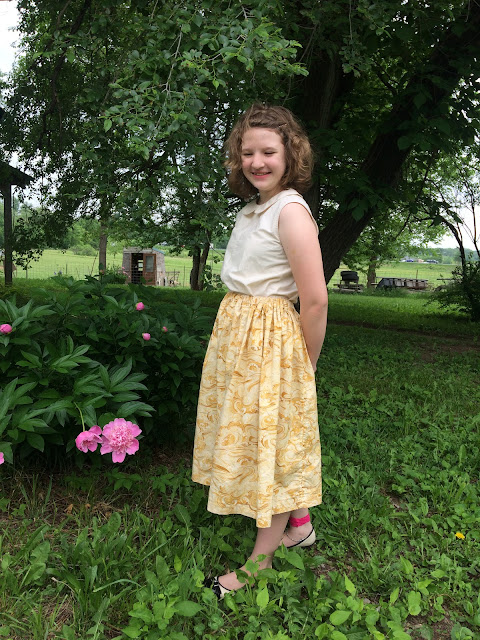 She got her cream blouse. I got my fun little details. And at the end of the day, it was the perfect blouse to pair with her golden yellow skirt. 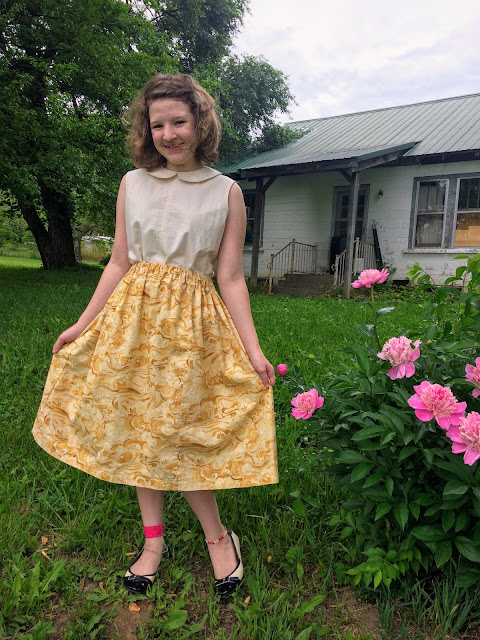 Just enough detail to be pretty, but it doesn't detract from from the lovely print of her skirt at all! I'd say, between my sister and I, we managed to make a pretty great outfit.