Yesterday afternoon was my sister's Pride and Prejudice themed birthday party. It was a lovely event. 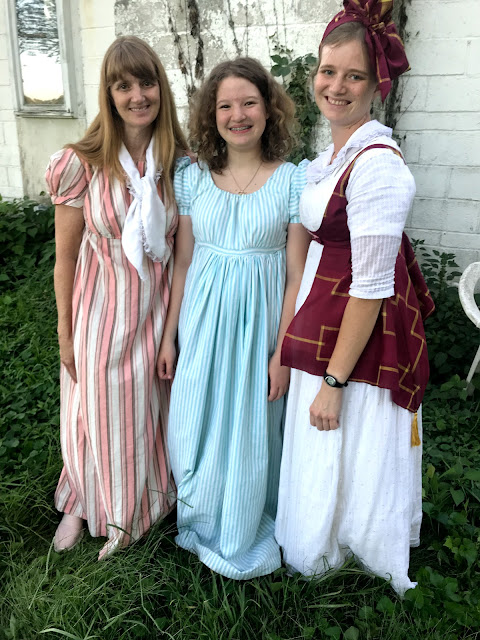 Friday night, I arrived home after spending a week in Uganda. The decision to take that trip was made about a month before I left, so it was somewhat sudden compared to other trips I've taken. Before too long I'll try to write a blog post about the trip, but that's not what this is. 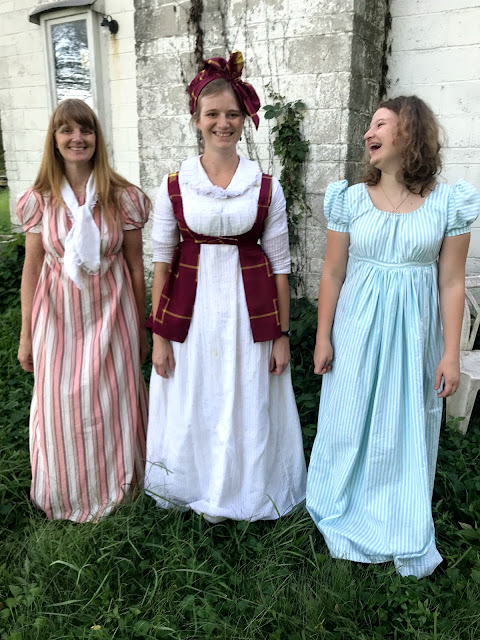 Knowing before I left that my sister's birthday party was going to take place less than 24 hours after I got back, I desperately tried to finish all the small regency era projects I had planned to accessorize my dress with before I left the country.There would be no sewing time once I got back. 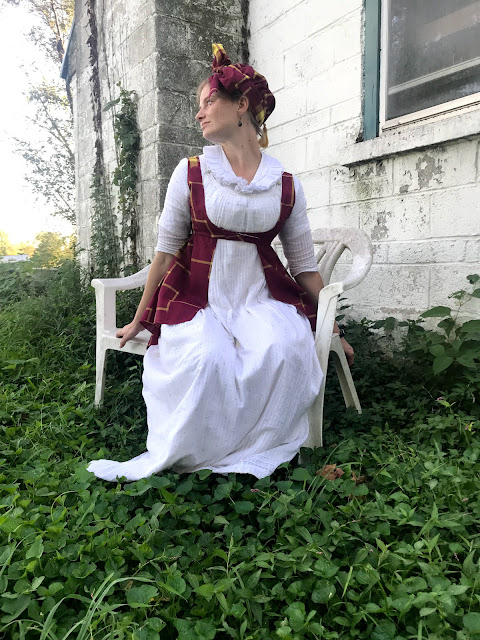 Well, I almost met that goal. My turban cap was finished well in advance (as in, before the trip to Uganda was even finalized) The chemisette I chose to make was finished about a week before I left. The sleeveless spencer jacket thingy? That was partially sewn together by machine before I left, then taken with me and finished by hand on the trip. So far so good. 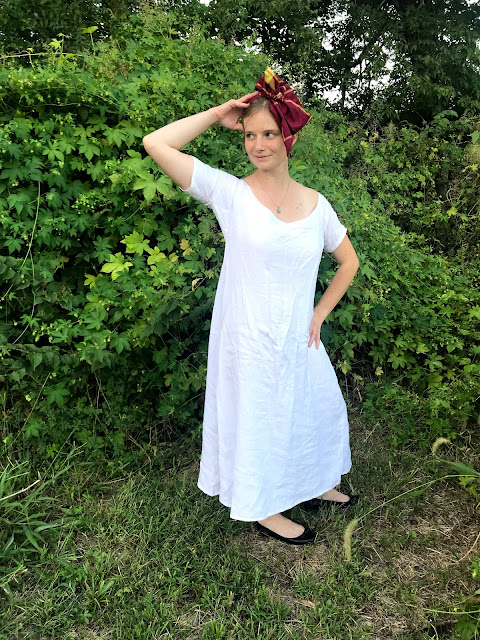 There was only one thing I was lacking when it came to getting dressed for this party. A very important layer - a shift. The undermost layer. The layer that's completely unseen beneath everything else. The layer which allows one to comfortably wear stays or a corset and protects one's dress from sweat and dirt on the skin. Not a layer which can be skipped. 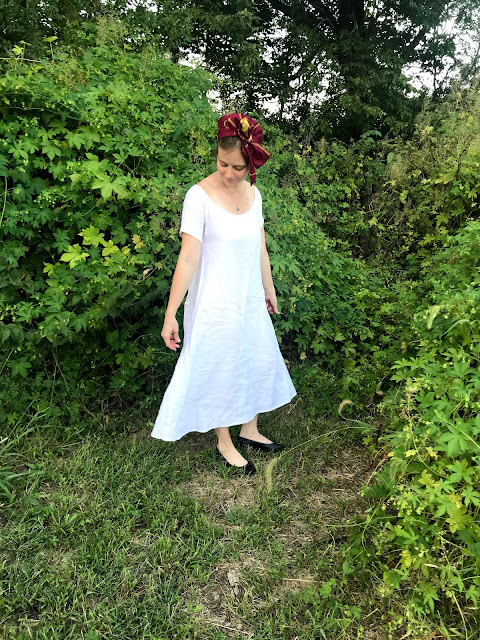 Of course, at one point in time, I did have a shift which worked with my regency dress, but it seems to have disappeared. I've searched and searched yet have been unable to find it for months now! My Victorian chemises are easily found where they belong, but those have the wrong necklines to work under my regency dress. Likewise, my 18th century shift is right where it should be, but that has too much fabric in the sleeves to work with my regency dress. Thus, a new shift was definitely in order - and I knew this well in advance of both the party and my trip to Uganda, but I did not get around to sewing such a garment before I left the country. 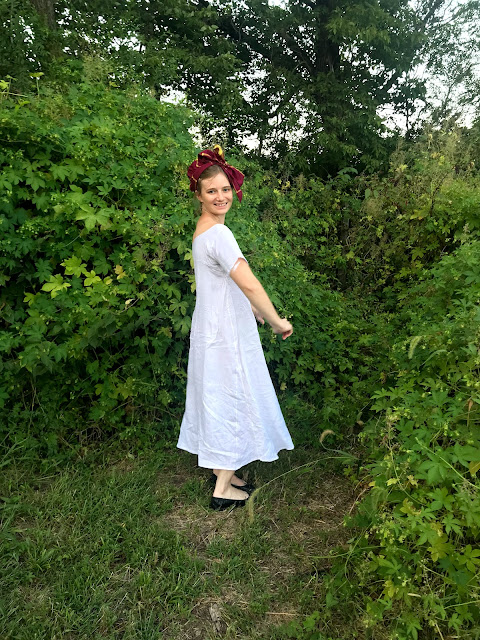 What I did do however was order fabric for at least 3 different shifts/smocks/chemises - the necessary regency shift, a renaissance smock, and one more such undergarment from an undetermined era. That's right, at the end of July I ordered 6 yards of beautiful white lightweight linen. After wearing my 18th century shift, I've discovered linen undergarment are way more comfortable than cotton, so that's the material I plan on making all my shifts/smocks/chemises from here on out. 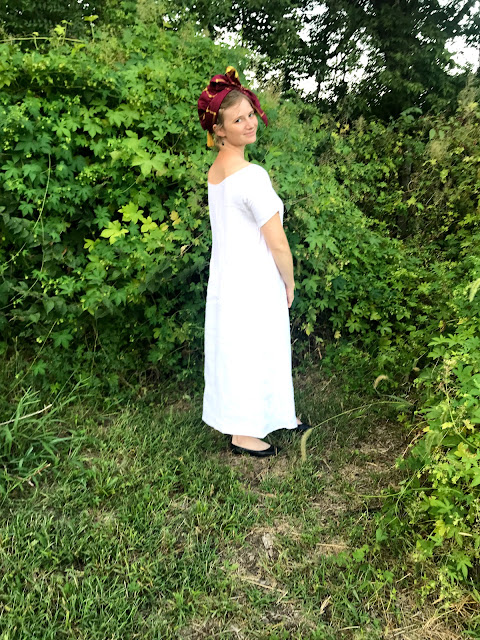 Upon receiving my 6 yards of pristine white linen in the mail, I pre-washed it with a bunch of petticoats which needed laundering. Unfortunately, my red 18th century petticoat wound up in that load of laundry with all the white petticoats and white linen. When I went to transfer the load of laundry to the dryer, my brand new, beautifully white, linen was no longer white. It was very, very pink. I may have shrieked. I removed the offending red petticoat from the washer, glared at at, got mad at myself for making this mistake, then rushed off into town to buy whatever dye removal and laundry whitening agents I could find. Two days, 4 trips through the washer, and one long soak in oxiclean later, my linen was nearly white again. It's still ever so slightly pink, but I decided it was good enough, so I went ahead and dried it and rolled it on a bolt, ready for undergarment making. 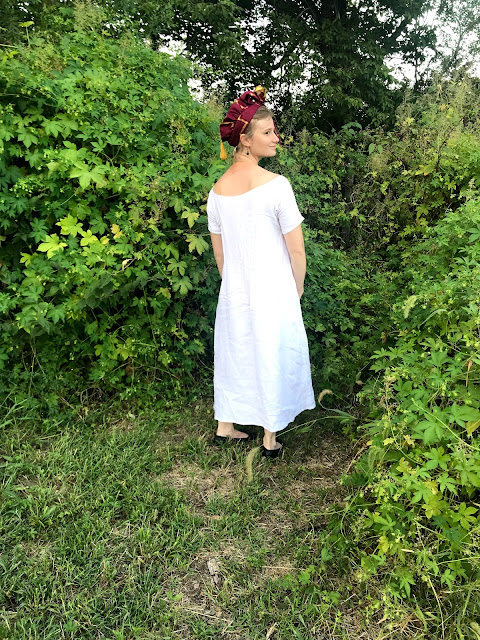 Fast forward to yesterday morning. After a nights sleep in my own bed, in my home country, for the first time in over a week, I enjoyed a cup of not instant coffee, talked to my family for a bit, then pulled out my bolt of pale pink linen and went to work making a shift as fast as I possibly could. 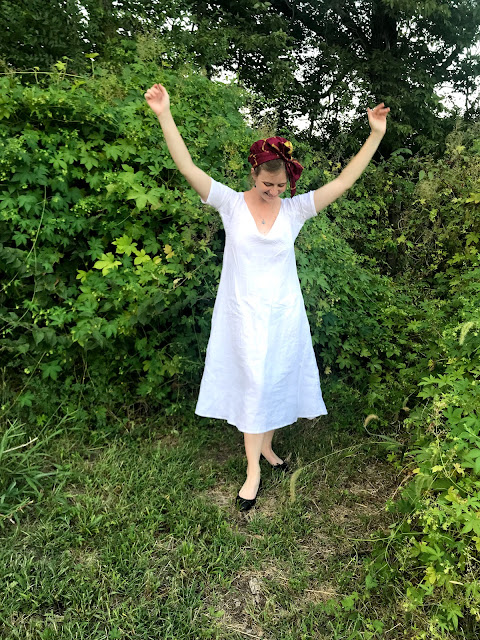 While my sister baked cupcakes for the party, I cut my shift according to the diagram in Costume Close Up. 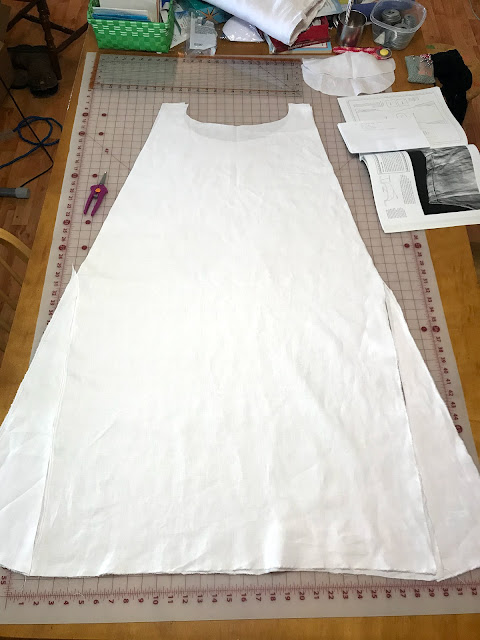 While my parents cleaned up the dinning room for the party, I went to my sewing machine with the collection of linen rectangles, triangles, and squares the shift would consist of, and began assembling it as fast as I possibly could with machine-sewn, flat-felled, seams. 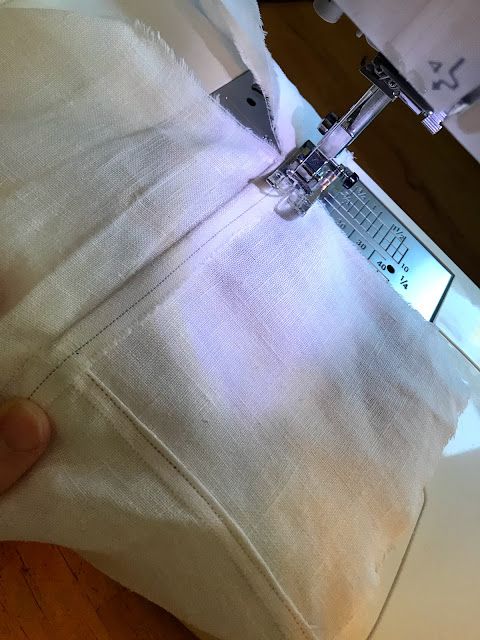 Two hours later, my shift was hemmed and done! I went to finishing the preparations for the party craft as my sister's guests began to arrive and get dressed in the regency dresses we had available for them to borrow. 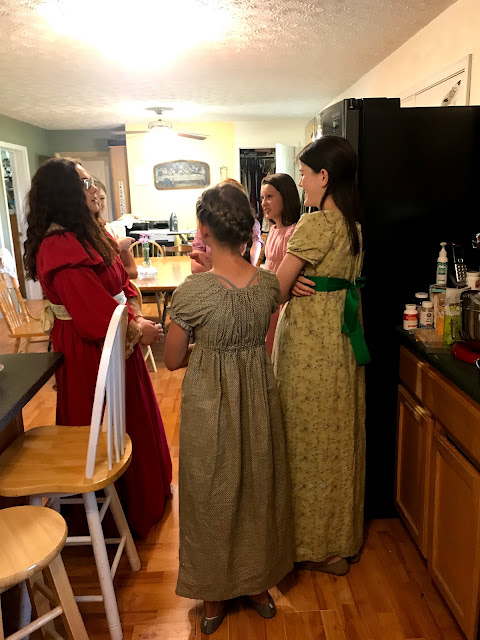 As the girls began to enjoy their tea, I disappeared to get myself dressed for the party. 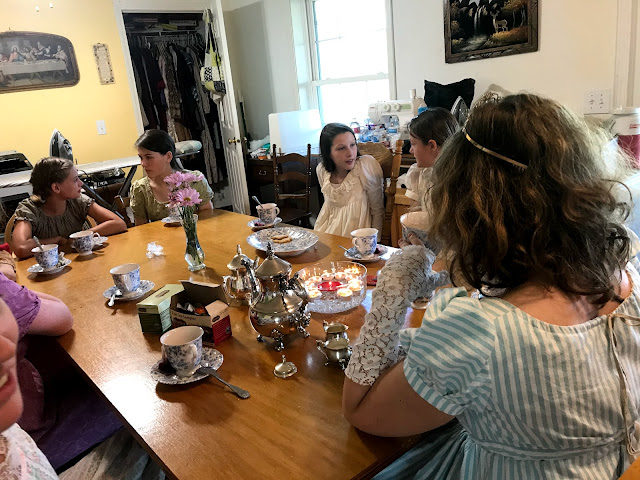 On went the new shift. It fit beautifully! 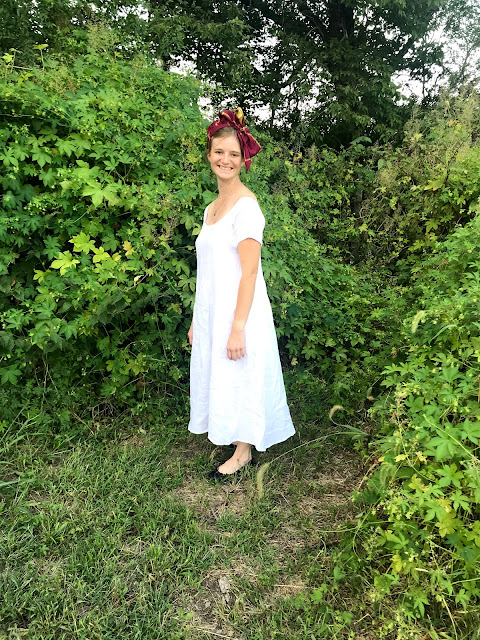 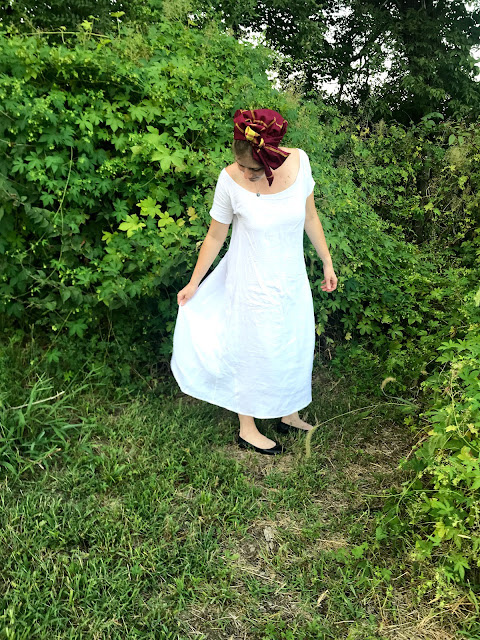 The pieces are all cut exactly according to the diagram in costume close up, with the exception of the sleeves, which I made a couple inches wider to fit my arms (I measured my bicep, then added an inch for wearing ease to figure out how wide to cut the sleeve), and a bit shorter to fit under the sleeves of my regency dress. 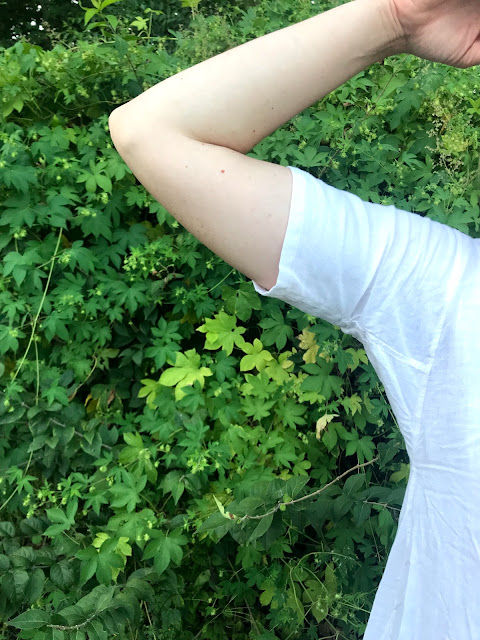 I'm honestly amazed by how well-fitting and comfortable this shift is! All my others have felt slightly "off" somehow, either too loose, or a bit too tight somewhere - but this one is perfect! It's so comfortable, I actually wore it as a night gown last night. I'll be using this pattern again! 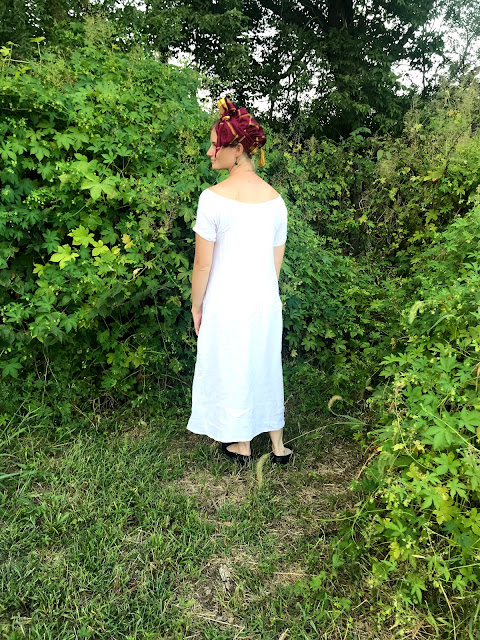 Over the shift I wore my pink corset (My regency corset was unbearably uncomfortable when I put it on for some reason, so, last minute I opted to wear the old Victorian corset instead. It has very similar bust gores to a regency corset, so I was hopeful it would hold my bust up at the right level for my regency dress - thankfully it did! And was very comfortable. Though I may need to actually make myself a new regency corset sometime soon.), my bodiced petticoat, my regency dress, and all the new accessories. 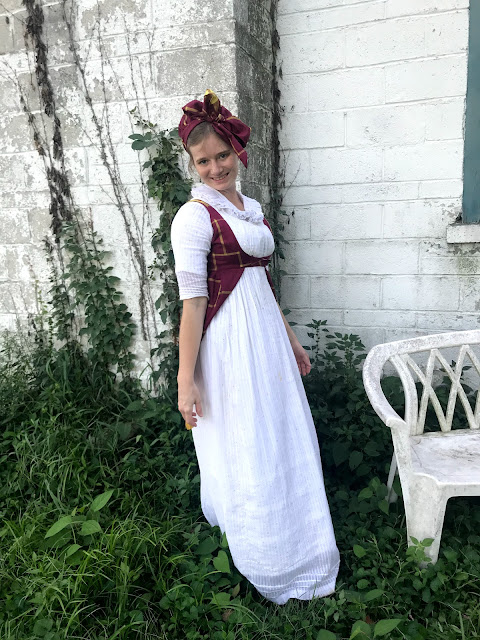 The birthday party came off splendidly! I helped my sister organize the different activities, and the girls all seemed to have fun! 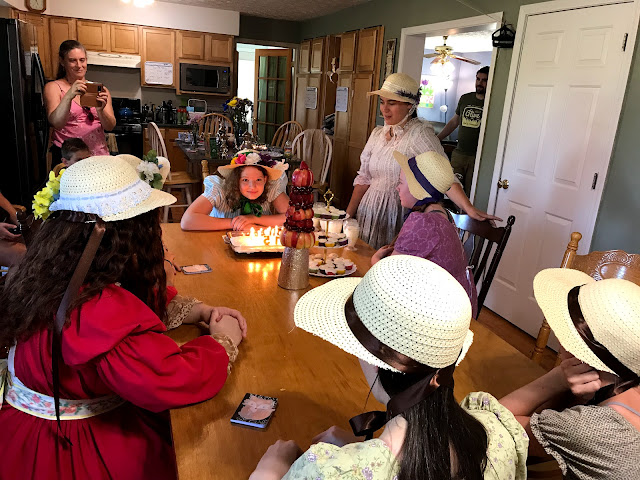 One of these days, I'll share about the activities we did, my sister's dress she made herself, and finish blogging the accessories I made myself, but for now I'll leave you with the Historical Sew Monthly details on my speedy quick, super comfortable, brand new, regency shift: 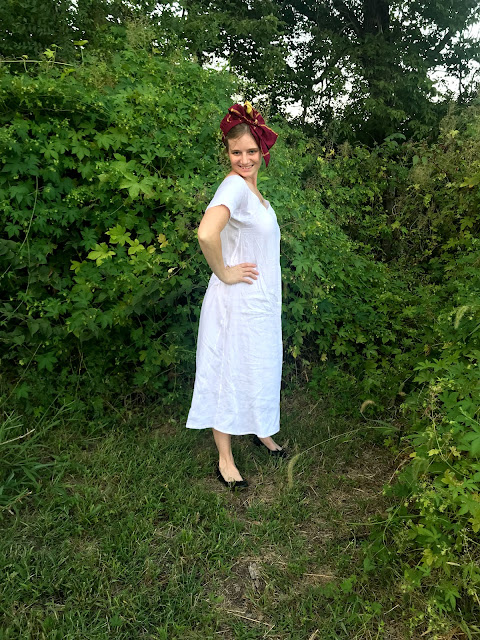 Challenge #9: Everyday
What the item is: A Shift


How it fits the challenge: This is as everyday as it gets! Shifts were worn everyday, the first layer worn under all other clothes.
Material: Linen
Pattern: I based this off the diagram in Costume Close Up, and used those dimensions to cut my panels, gores, and gussets. I shortened the sleeves however as that pattern is for a slightly earlier era shift than I was going for.
Year: This will work from the mid 1790's through the 1840's.
Notions: Thread
How historically accurate is it? The material, linen, is accurate, though modern linen is a bit different than what they had back then. The pattern is accurate. It's constructed entirely with flat felled seams, which is accurate. However, it's entirely machine sewn, because I needed it in a hurry! So, 85% I think.
Hours to complete:About 2 hours sewing, 1/2 hour cutting out and getting the pattern from the book.
First worn: Today! 9/14/19, under my regency dress for my sister's Pride and Prejudice themed birthday party. I made it in a hurry this morning because my previous regency shift was no where to be found!
Total cost: the linen was $8.50 a yard and I used less than 2 yards, so around $15