Sewing Madness (and the AWESOME results)

Every year it happens. We come up with an idea. We make it happen. We work hard till the wee hours of the morning. We drive there, while still finishing the last few items. Then we have a great time, while blowing everyone away with our amazing designing and sewing abilities. At the end of the day we swear it will be different next year, we will finish sewing days, if not weeks in advance. But every year it's about the same. Yep, that's how the Japanese Festival has gone for us, every year, for the past 5 years. 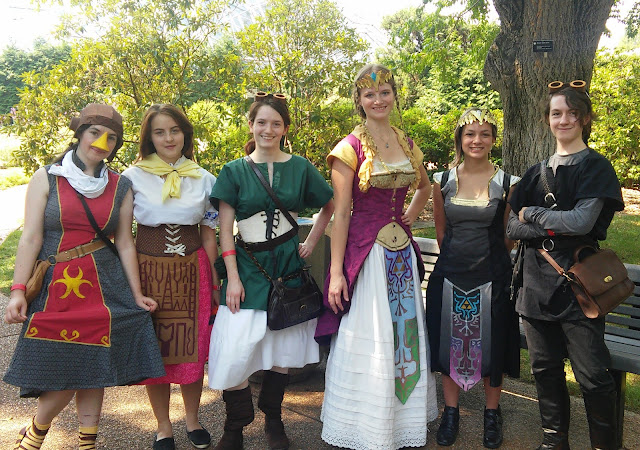 left to right, Erentry as Medli, T as Malon, Tori as Link, Myself as Princess Zelda, S as Dark Zelda, J as Dark Link

I have two amazing best friends, who are both obsessed with things from Japan, especially Anime. So every year they choose an Anime for us to cosplay from. I personally have no particular affinity for Japan and prefer my TV shows to be live acted, but I love my friends, love dressing up, and the Japanese Festival is lots of fun. So, what started out as "I'll do this because my friends want to," has turned into, "Yay! The Japanese Festival again!"

This year the chosen cosplay was Legend of Zelda, one of Tori's favorite video games, which originated in Japan. We decided to make our cosplay with a bit of a steampunk twist. After 5 years of doing this we have our costuming system down. Tori and Erentry decide what we will cosplay as. Erentry is our head designer, especially when it comes to accessories. 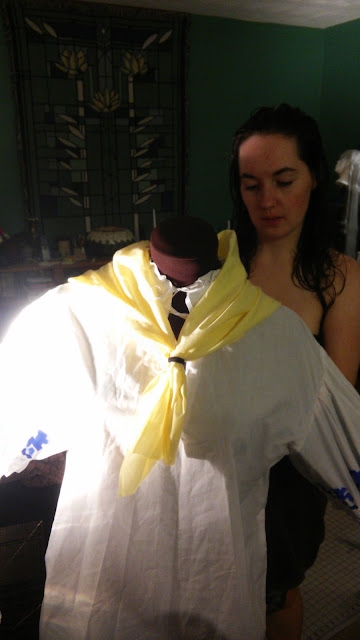 I'm the head seamstress. Tori helps out with whatever we ask her to do. Erentry's Mom helps out with sewing and making accessories. This year she did all the painting required on the costumes. 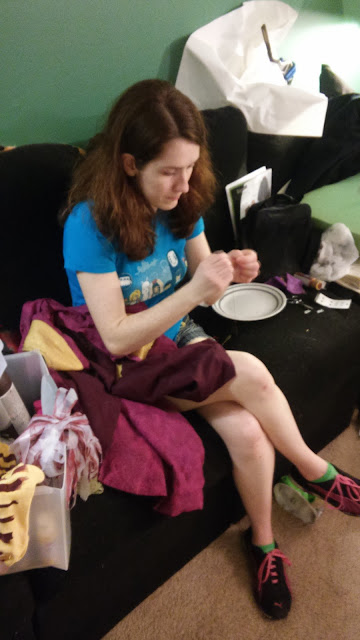 Sewing buttons on, one of those important things that always gets put off till the end. 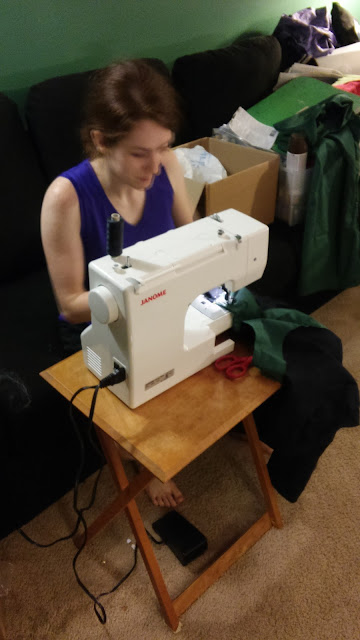 Due to the compressed time frame we even got Tori to use a sewing machine for the first time since 4-H! Now that she is sewing again I look forward to seeing what projects she comes up with in the future!

Surprisingly, despite the late start this year, by the night before we only had a few things left to finish. 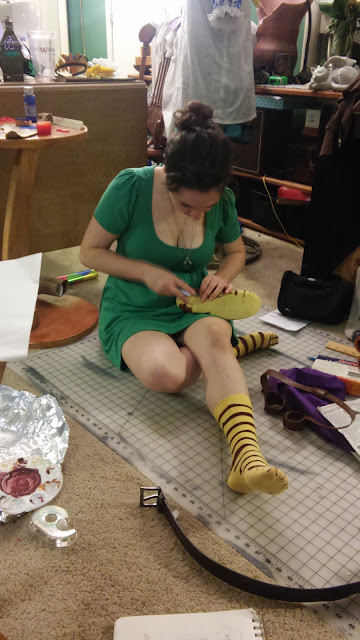 Erentry makes her Medli feet. She is a genius when it comes to making accessories! For these "feet" she dyed and painted 2 pairs of white socks, then used one of the pairs to cover a pair of flats with.

Once we get to the festival the fun begins. What started as Erentry, Tori, and Myself, has turned into us plus various friends and family. This year my family even came for the first time! Not wanting to be left out of the fun, My little sister chose to dress as a Pokemon, Vaporeon. 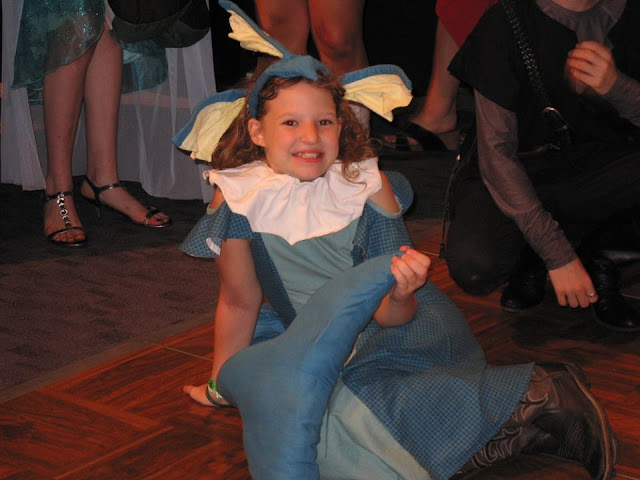 She used the ears, tail, and ruff from Erentry's costume last year. I made the blue dress the night before the Festival.

Throughout the course of the day we had multiple people stop us and ask for pictures, and we even participated in the Cosplay Fashion Show. 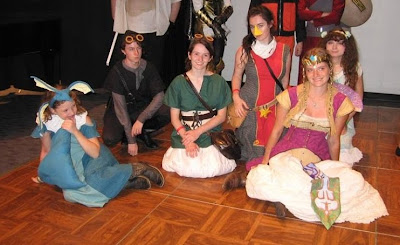 We all got packed into a little hallway waiting for the fashion show to begin. 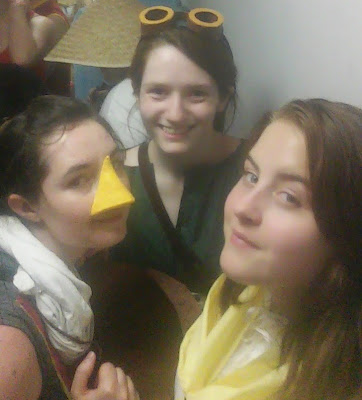 While rather uncomfortable, it was fun to see how other people had made their costumes. 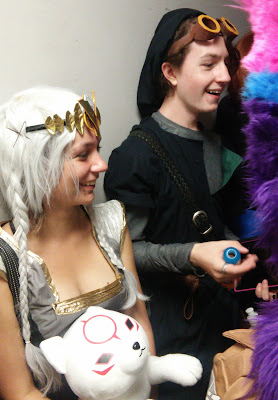 And it was certainly fun to show off our costumes!

We saw traditional Japanese things, watched a Sumo wrestling demonstration, and got to do Bon Odori dancing (traditional Japanese dancing to celebrate the end of summer). One of my favorite parts of the Japanese Festival each year though, is just wandering around the Botanical Gardens, where it's held. The gardens are beautiful, and hold so many surprises. 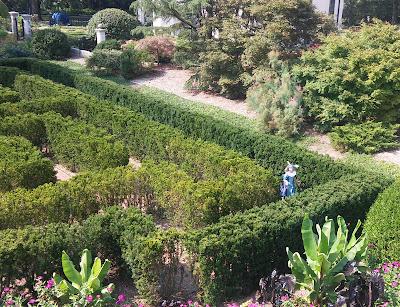 My little sister runs through the maze

In the Victorian garden there is a hedge maze. Above the hedge maze is an observation tower. 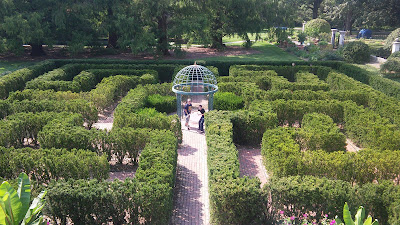 The kids broke into a random game of tag in the maze. It was great fun to watch from the tower, where we hollered instructions and encouragement. 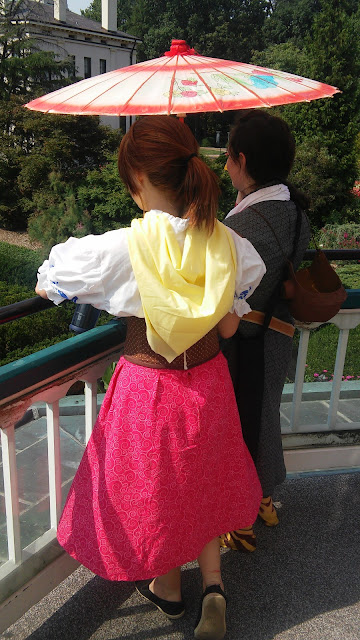 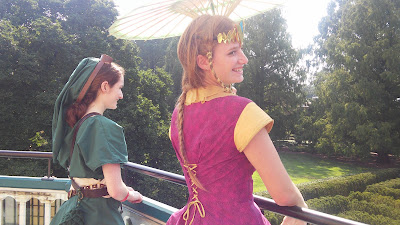 By the end of the day we were all exhausted, but it had been worth it! How many excuses do you get to dress up in awesome costumes with your best friends and wander through gorgeous gardens? Not to many, so I'll keep taking this one, sewing madness and all.