I have just over a month to make an 18th century ensemble for myself. There's a Rococo picnic I want to attend happening at the end of April. At this moment, I have nothing quite acceptable to wear. My 18th century wardrobe currently consists of a shift, an under petticoat, a pair of shoes, and a white linen cap (not yet blogged). A few more layers are required for me to be a properly dressed Rococo lady. The stays I've been procrastinating on for well over a year? Yeah, those have got to happen. Now. And the gowns I've been dreaming of? It's time to make one reality. 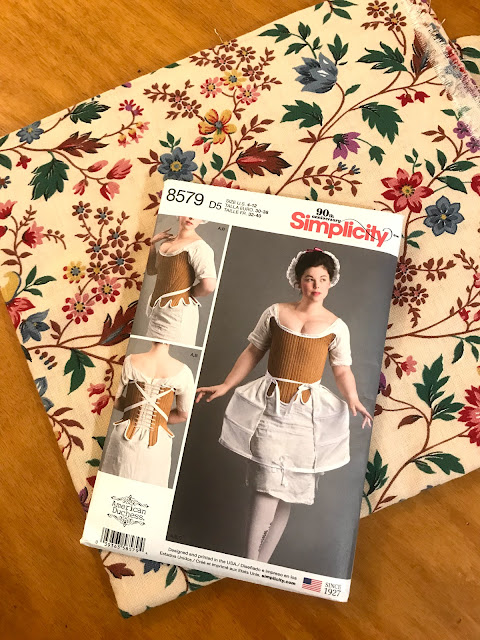 For the stays I've decided to use Simplicity 8579 - one of the 18th century patterns Simplicity produced as a collaboration with American Duchess. I'll be altering it somewhat to lace up in the front as well as the back, since back-lacing only stays sound difficult to put on one's self without assistance. Stays with lacing up both the front and the back are a historically accurate option and would seem to be more user-friendly. 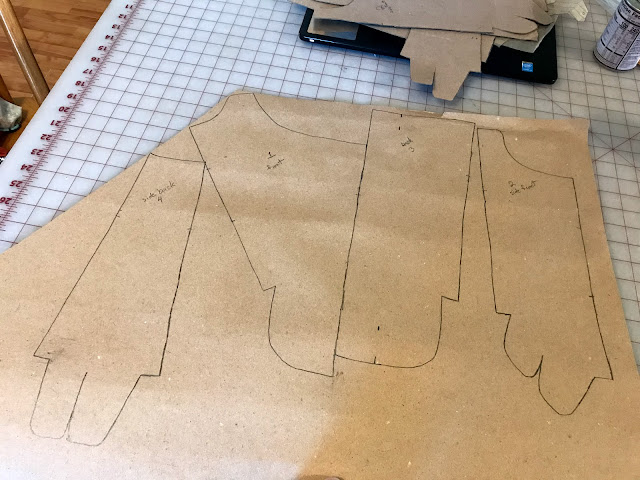 Picking the pattern was easy. Deciding to make the stays both front and back lacing was also easy. My procrastination has had nothing to do with either of these things, and everything to do with the next step of the project, possibly the most important part of the whole stay and corset making process - making the mock-up. 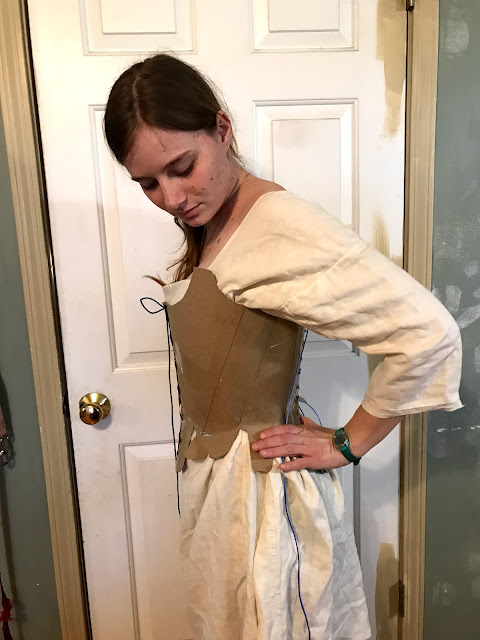 I do not enjoy making mock-ups whatsoever. Now, I do know their value, and I've never regretted making a mock-up (and have regretted not making a mock-up), but I just generally don't like making them. Thus, I've avoided making my mock-up stays, and thus my actual stays as long as possible. 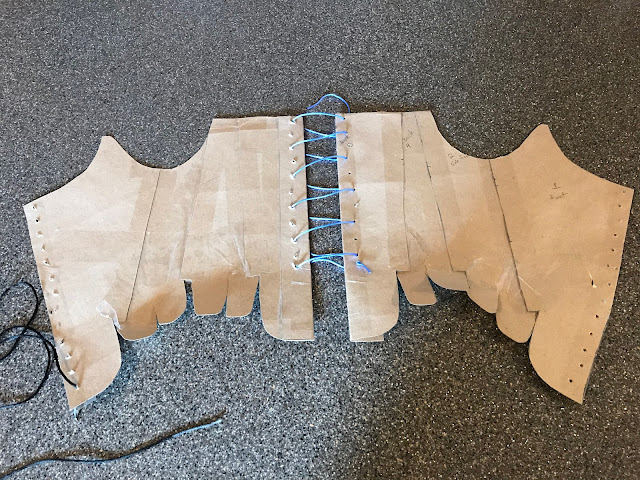 Due to my immediate need of an 18th century outfit, my time of mock-up avoidance was forced to an end last week. I made my mock-up. Out of cardboard. 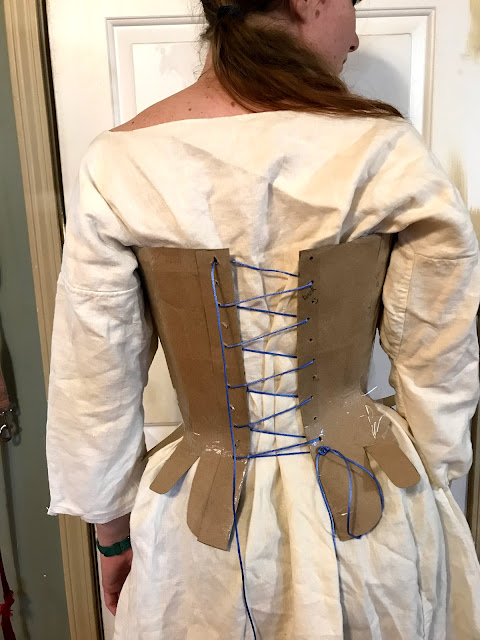 18th century stays are often fully boned, thus more rigid than a Victorian corset. Making a fully boned mock-up sounded tortuous. (This is part of the reason I've avoided making a stays for so long.) However, a few months ago, I learned in one of the 18th century sewing groups I'm a part of on Facebook, that non-corrugated cardboard (like the stuff cereal boxes are made from) works well for making stay mock-ups. The stiffness apparently nicely simulates the structure of fully-boned stays. This concept made the stay mocking-up process seem a lot more approachable. 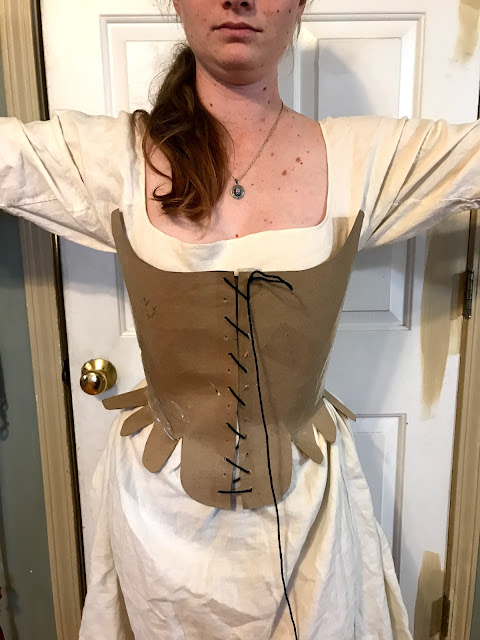 I just so happened to have two large sheets of this type of cardboard on hand. So last week I traced my pattern onto the cardboard, cut it out, taped it together, punched holes in the edges for lacing, and tried the cardboard stays on. 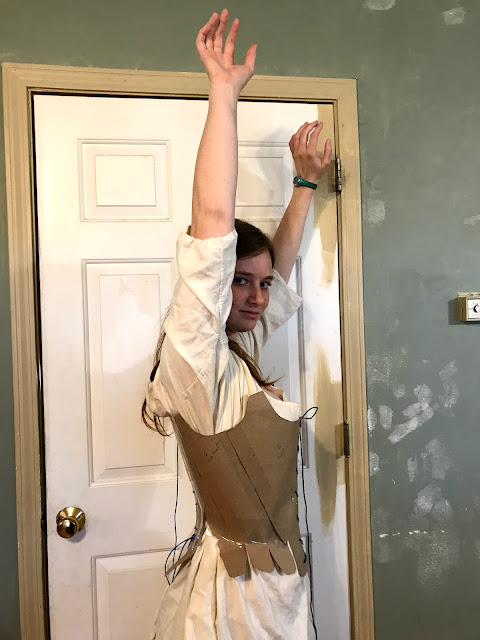 They actually looked like stays! And they fit pretty darned decent! And took way less time to make than a fabric mock-up would have! There were only a couple small fit changes I needed to make. 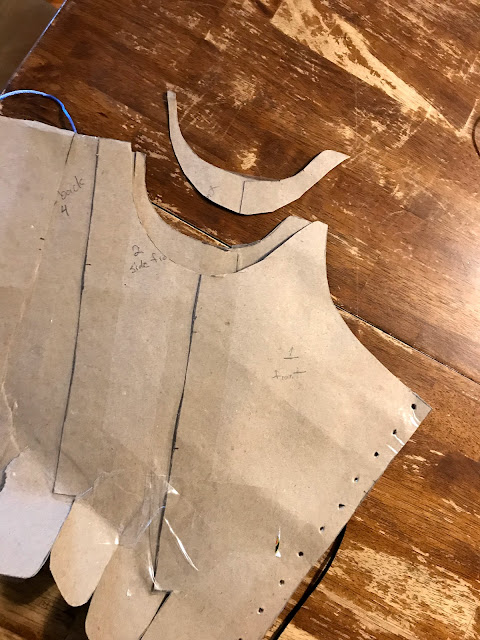 First I lowered the armscyes slightly so they wouldn't dig into my armpits. 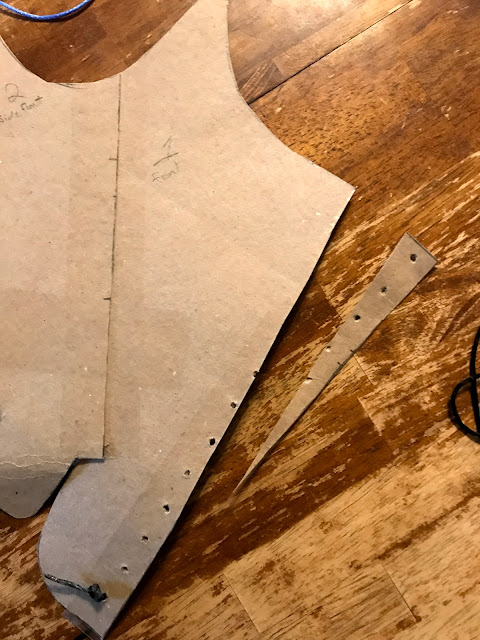 Then I took a bit of width off the top of the center front edge for better bust support. 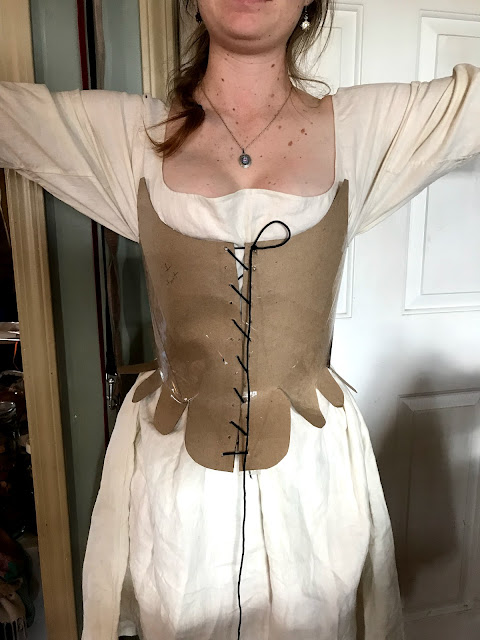 I laced myself back into the cardboard stays, and. . . 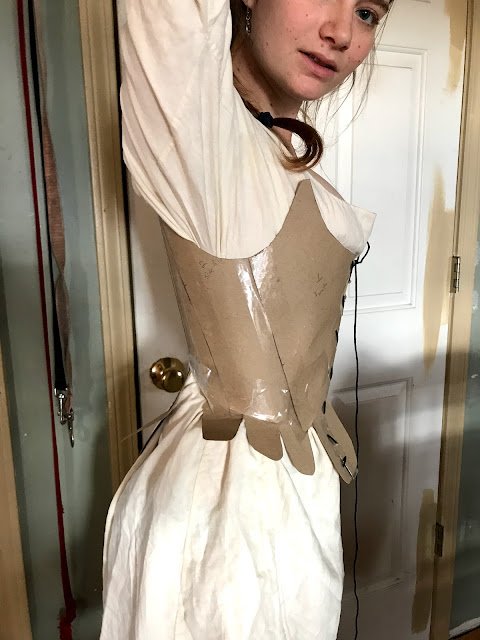 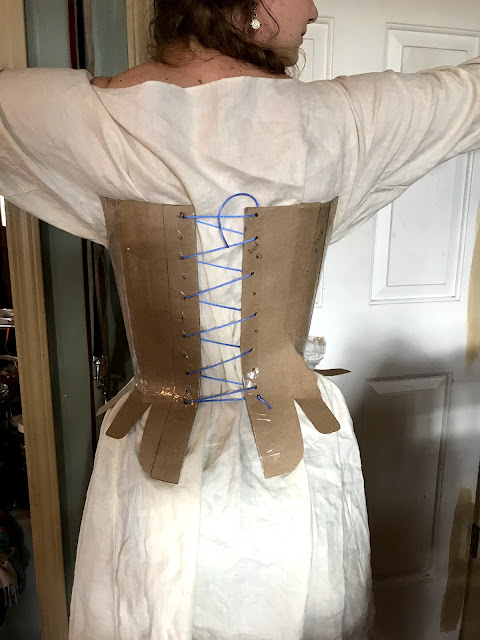 So now that the pesky mock-up stage is out of the way, I can cut out my actual stays, sew them up, then make this dress: 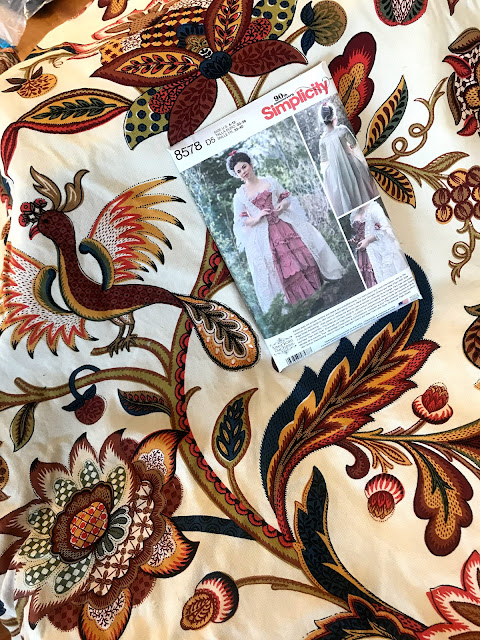 A sacque-back gown, which will be machine sewn, in a rather inaccurate fabric. But, I'll tell you all about that later. Right now I'd better get to sewing all the boning channels on my stays!