My mom, sister, and I accidentally wound up in an American Girl Doll store. We took a day trip to  to go to an outlet mall, took a wrong turn, and found ourselves in the parking lot of a mall, right in front of an American Girl store.
Now, my family has been fans of American Girl dolls for over 20 years, but we've never been inside a store. (When I was really into AG dolls the only store was in Chicago! Too far of a drive.) So, since we happened to find ourselves right outside of a store, my mom, sister, and I decided we might as well go inside and look around. Oh, that was fun!
We wondered around the store, admired the dolls and how they were set up, and discussed some of our favorite dolls and outfits. My sister fell in love with the shirt this doll is wearing: 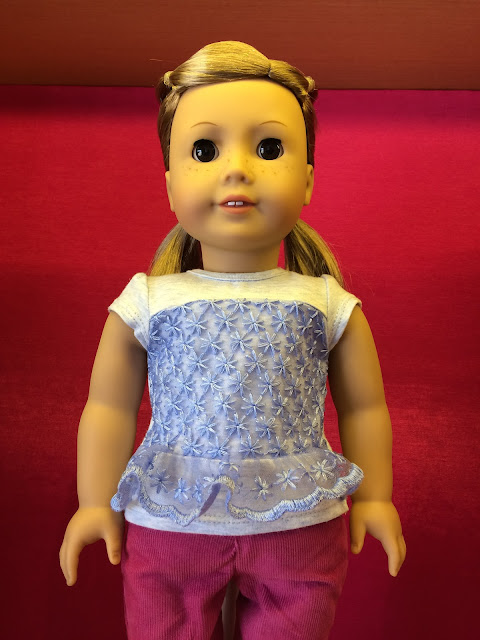 The shirt was available in Girls' sizes as well as doll size, and was even on sale that day, so we let my sister try it on. Lo and behold - that girl has grown this year! She tried on the largest size AG had, and it was too short! (When did she get so tall??) So, the shirt got left behind, but, as my little sister will tell you, there are a lot of advantages of having your own in-house custom seamstress. 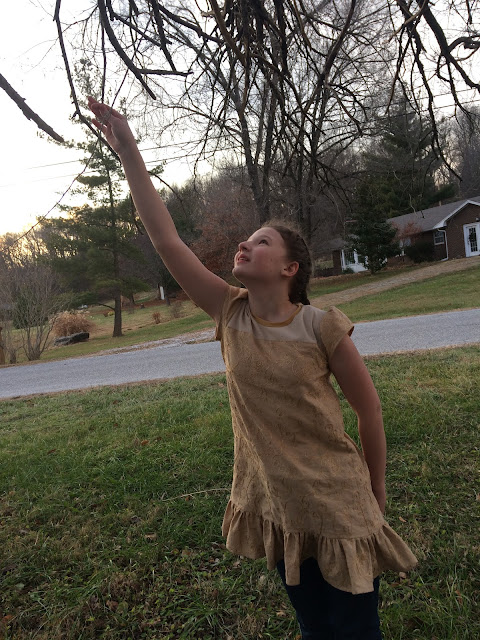 One of which is she can reproduce almost any garment for you - in your size, as long as she has the right fabric. Well, the right fabric appeared sooner rather than later. After we left the American Girl Store, we headed to the outlet mall we'd originally made the trip for. On the way to the outlet mall, we passed a fabric store. So, of course, we had to stop and check it out. Well, it turned out it was an upholstery and drapery fabric store, not an apparel fabric store, but it was still worth wandering through. 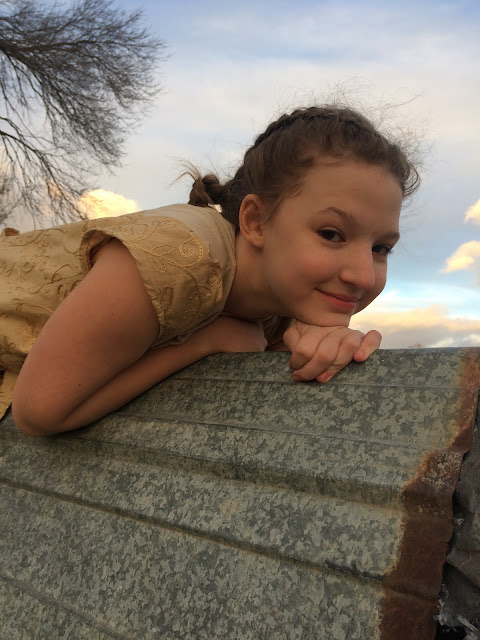 There we found this pretty embroidered cotton, in the clearance section for $5 a yard! My sister decided it would work to reproduce the American Girl shirt. So, we bought a yard, as the fabric was 60 inches wide, so we didn't need more than that! 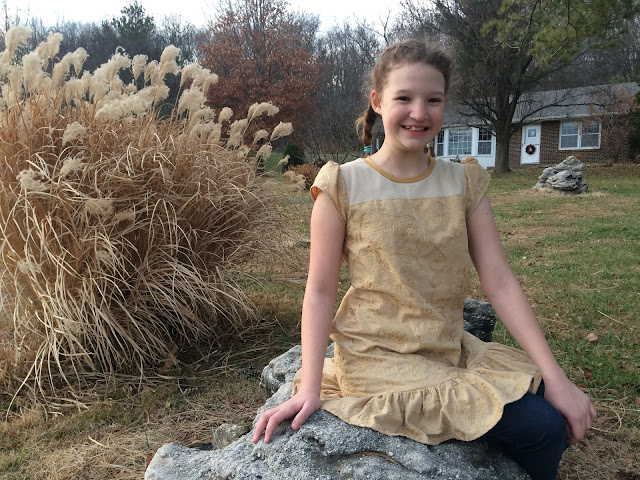 The following week, the shirt got made. I used McCall's M7111, a very simple girl's dress pattern. It goes up to size 14, and is from their "Learn to Sew" line. I shortened the pattern from dress to tunic length and added a ruffle to the hem. 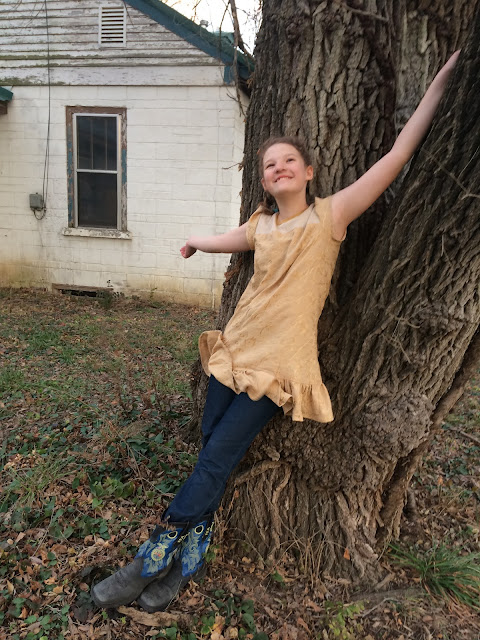 The sleeve pattern also got changed to be a bit more puffed, and I cut the pattern right across the chest so that a knit yoke could be added to match that of the inspiration shirt. 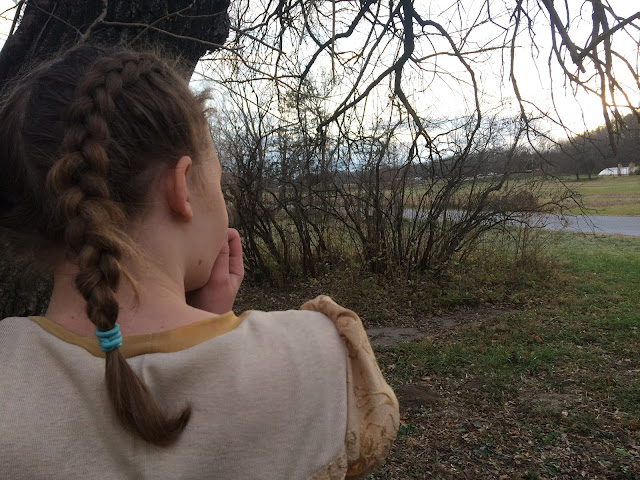 Once the pattern alterations were made, and the fabric was cut, the shirt came together incredibly quickly. A couple hours after work one evening, and the shirt was done! 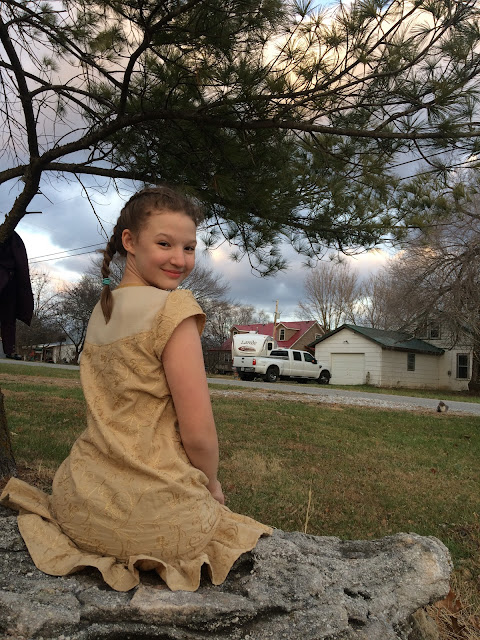 My sister was thrilled with her new "American Girl" shirt, and agreed to let me take pictures of it outside, despite the chilly temps - as long as a few of those pictures involved her sitting on top of the old chicken pen. 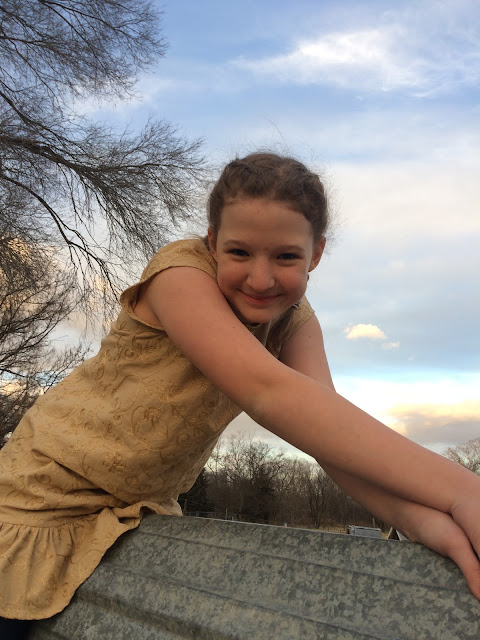 She loves getting to climb on things, so this is her current favorite photo prop. Florecita is a fan too - Just in case you didn't think goats could climb, here is proof otherwise. 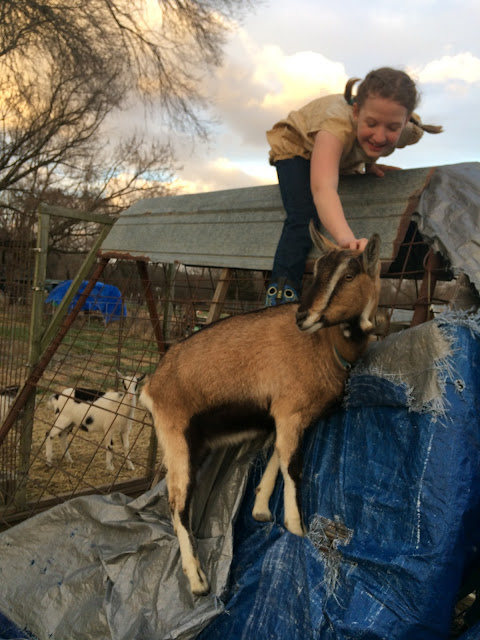 The goats proved to be a little distracting, however, so after getting the required "chicken pen and goat" pictures, we moved on to other locations. 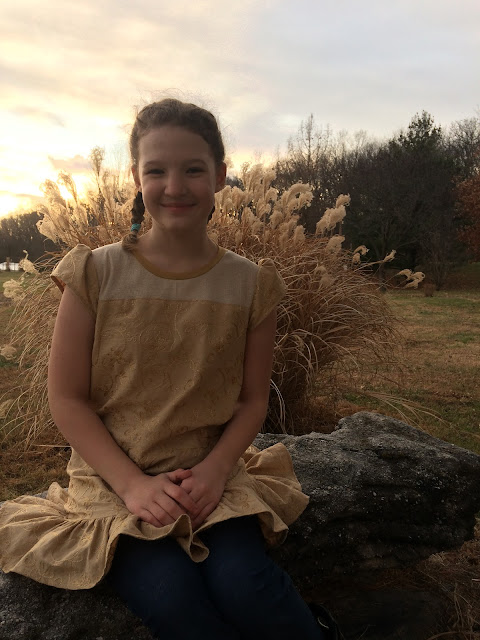 Trees and rocks hold still much better than goats do! 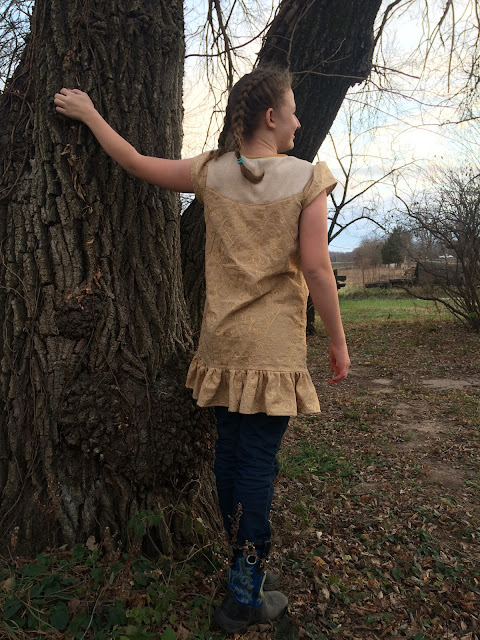 Although I have to say, trees and rocks are a little less fun! 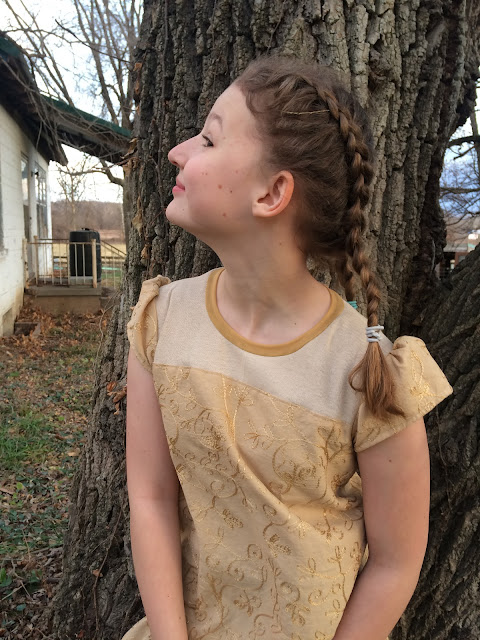 Posted by Alyssa at December 15, 2017
Email ThisBlogThis!Share to TwitterShare to FacebookShare to Pinterest