A night gown would have been boring. 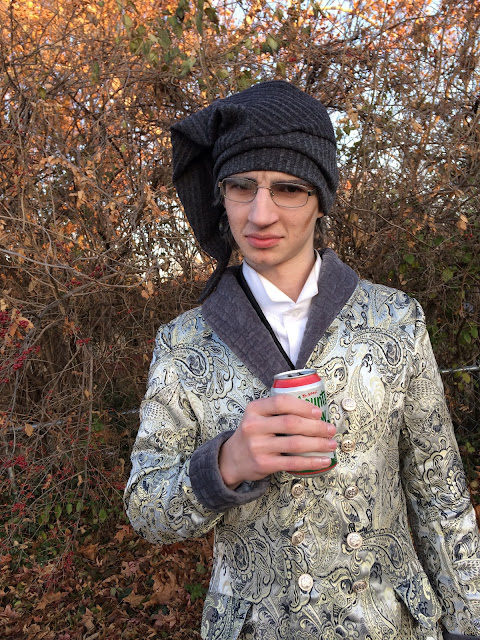 Scrooge spends the majority of "A Christmas Carol" in his night clothes, viewing his past, present, and future with a Christmas spirit from each era.  Thus, as my brother was cast as Scrooge in a production of "A Christmas Carol", I needed to design him some fabulous, scroogy, sleepwear to swan about in on stage. 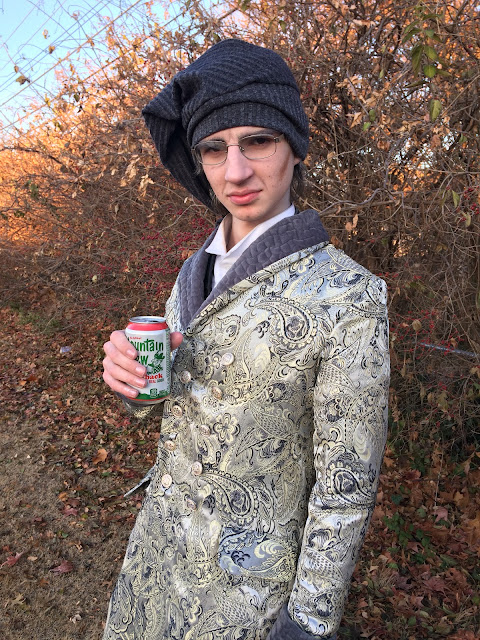 Ok, so maybe Scrooge doesn't "swan about" - but I still had the opportunity to make my brother an elaborate costume, and I was going to take it! 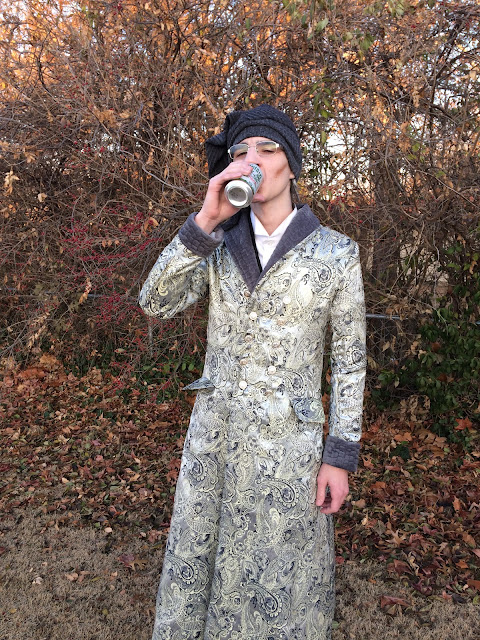 As mentioned above, a plain ol' night gown would have been boring - and rather inconvenient to have to put on while on stage in front of an audience. So, I decided to make my Scroogy brother a banyan, or a dressing gown, instead! A coat-like lounging garment, made from elaborate materials, which could easily be put on while on stage without having to be pulled on over the head. 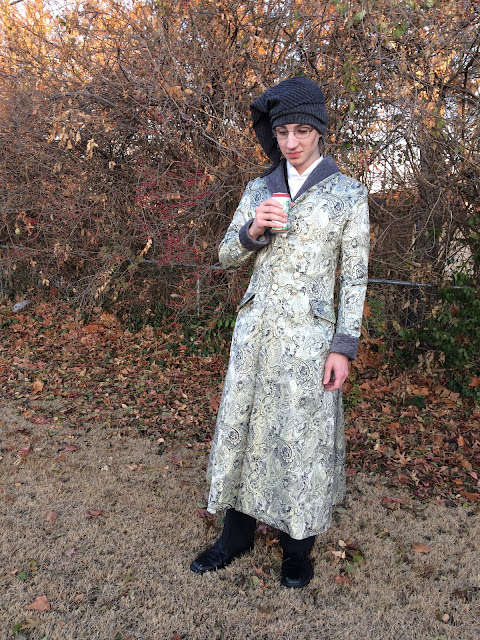 After coming to this conclusion, I began researching what banyans looked like in the 1830's and 40's. (A Christmas Carol was written in 1842).

I really liked this banyan from the 1830's, and decided to base my brother's Scroogy banyan off of it.

My mom and I went fabric shopping for the project, leaving behind the brother who would actually be wearing the garment. We knew we wanted the banyan to be made from an elaborate luxurious looking fabric - something eye catching and maybe a little shiny. By leaving my brother at home when we went fabric shopping, the risk of him vetoing this plan was eliminated. (He's not really a sparkes kind of guy) *cue mischievous laughter* 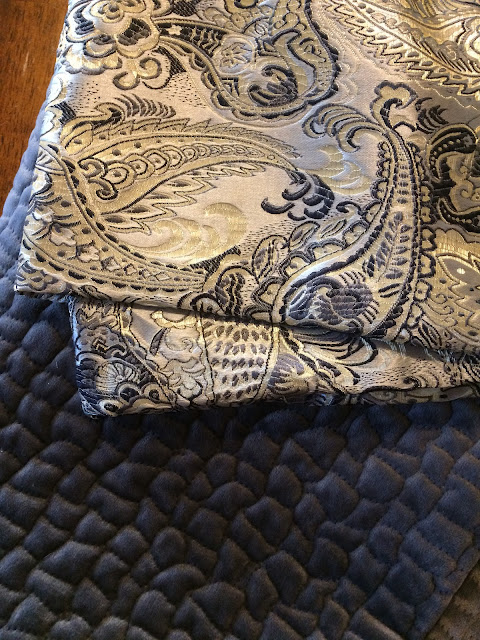 We left Joann's with a shiny paisley polyester brocade for the banyan itself, a quilted velvet for the collar and cuffs, and not one, but two patterns which would be used to make this spectacular paisley brocade banyan a reality. 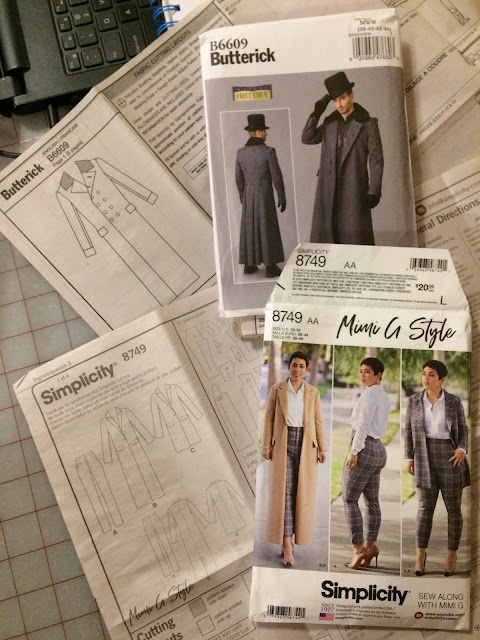 Now, there were no specific "1830's or 40's banyan" patterns to be found in any of the pattern books (and we didn't expect there to be). Butterick, however, did have a lovely men's overcoat pattern in their "making history" line, B6609. With a few tweaks, it would work great for a banyan pattern. There was only one issue - the smallest size included in the pattern would be a bit too big for my brother. We bought the pattern anyway so I could could reference it for pattern shapes, then set about finding a second pattern for a similarly shaped garment in my brother's size.

After considering multiple options for this second pattern we settled on Simplicity 8749, a trench coat pattern by Mimi G.Yes, it's technically a women's pattern, but it's a very straight cut coat pattern with no darts or other shaping so I knew it would work just fine for a male garment - and it came in the right size! If anything I would have to add more shape to the pattern to make the finished garment look properly "1840's".

With both patterns in hand, it was time to begin pattern altering/combining/ mashing/hacking and bring this banyan into reality! 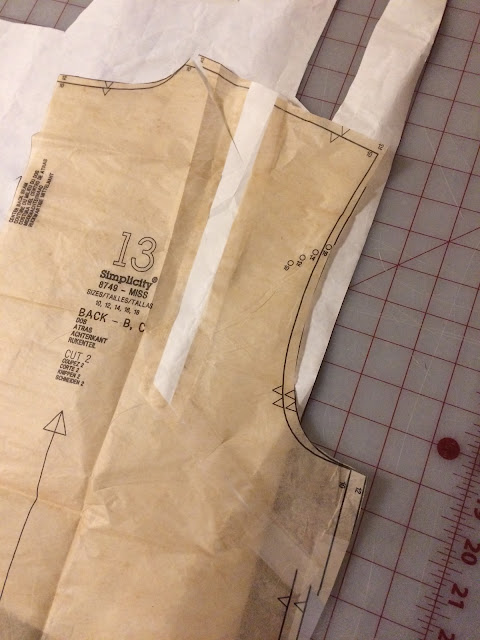 I began by doing a broad back/wide shoulder adjustment to the Simplicity pattern - everyone in my family has wide shoulders and this brother is no exception. 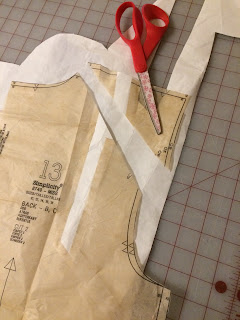 Next I shifted the shoulder seam to the back of the garment so it would be at the right place for 1842. I cut the new shoulder seam at an angle from neckline to middle of the back armhole. 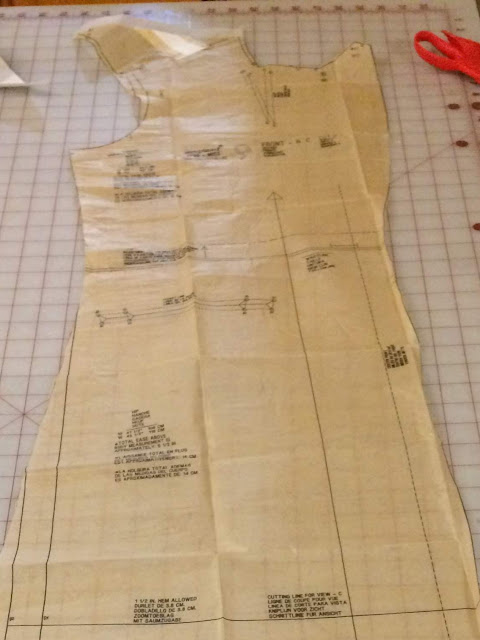 I taped the piece I cut off of the back shoulder onto the front shoulder and added seam allowance to the new shoulder seams. 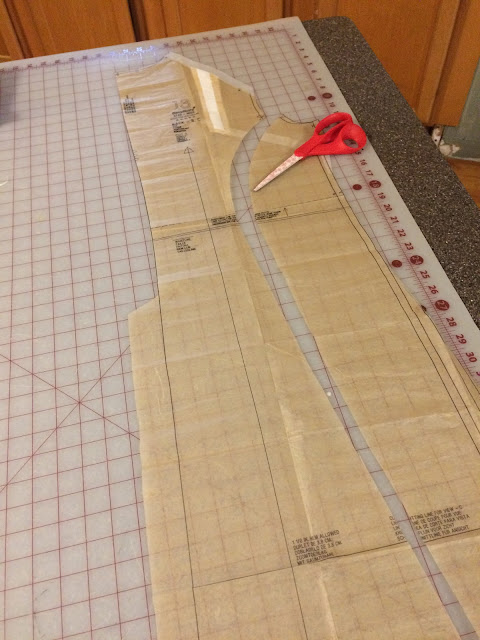 Next, I made the center back vent extra long to match the back pleats of the butterick overcoat pattern. Now it would begin at the waist rather than just a few inches above the hem. Then I added curved back side seams starting just below the new angled shoulder seams and going all the way to the hem. Once again, this was so the seam lines of my brother's banyan would match the seam lines of extant 1830's and 40's banyans and dressing gowns. 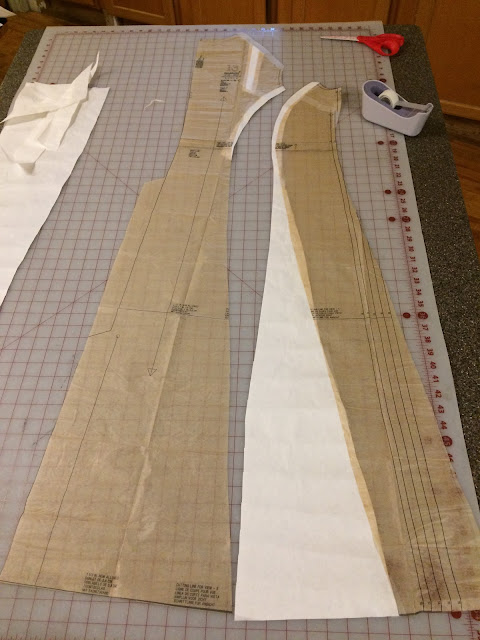 Once the new seam line was cut, I added seam allowance to both new back pieces and extra fullness at the hem - the original trench coat pattern was cut much straighter all the way down than 1840's banyans were. This alteration finished up the back pattern pieces, so I moved on to the front pattern pieces. 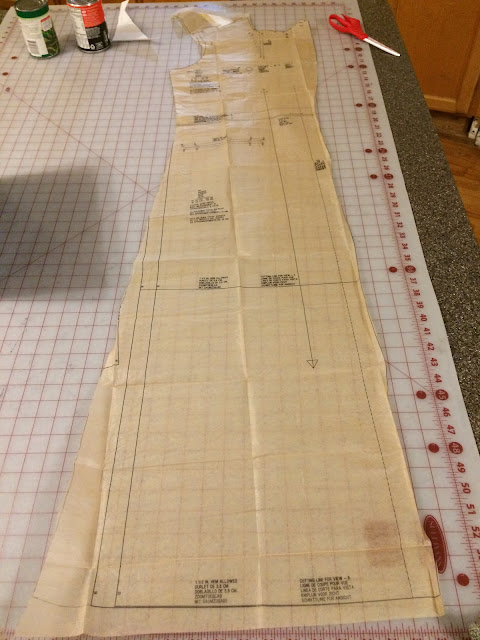 The front required less alteration than the back, but there was still work to be done. First, I cut the side seams at an angle so there would be more fullness at the hem. 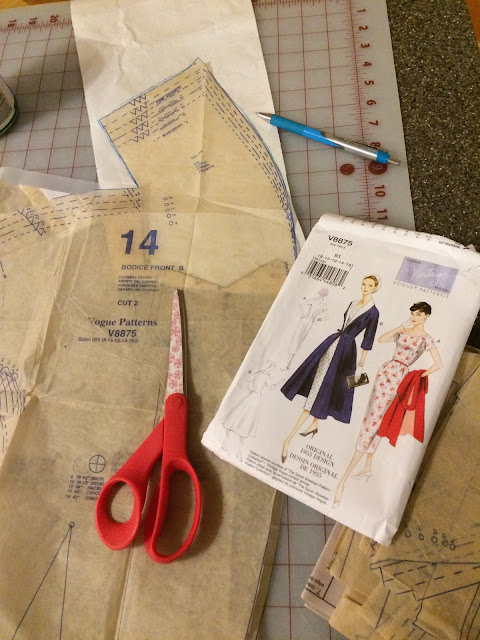 Next I added a shawl collar (more appropriate for a banyan than a coat collar) by tracing the collar from Vogue V8875 (used here for my dress coat) onto the front pattern piece. 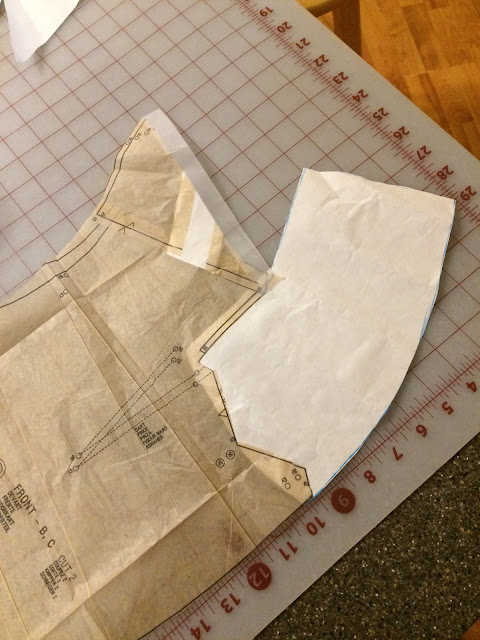 Then I changed the front to be double breasted by adding a couple inches to the center front,starting below the collar and going all the way to the hem. 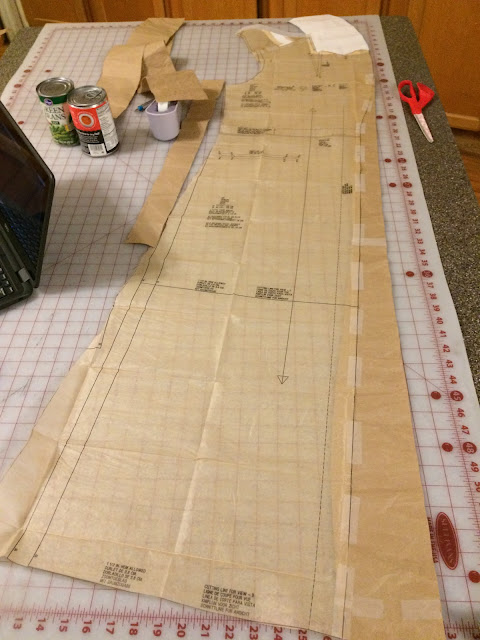 Finally, I adjusted the facing and lining pieces to match the new pattern shapes. 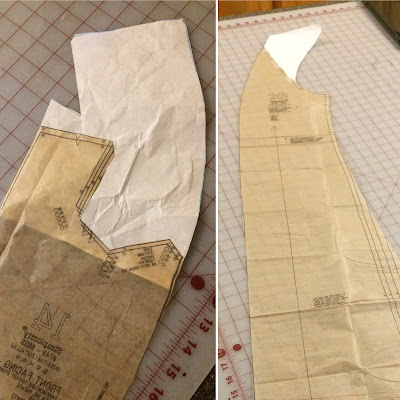 With all the hard work done, it was time to actually make this banyan! Out came the paisley brocade, quilted velvet, and a thrifted cotton sateen sheet for lining. 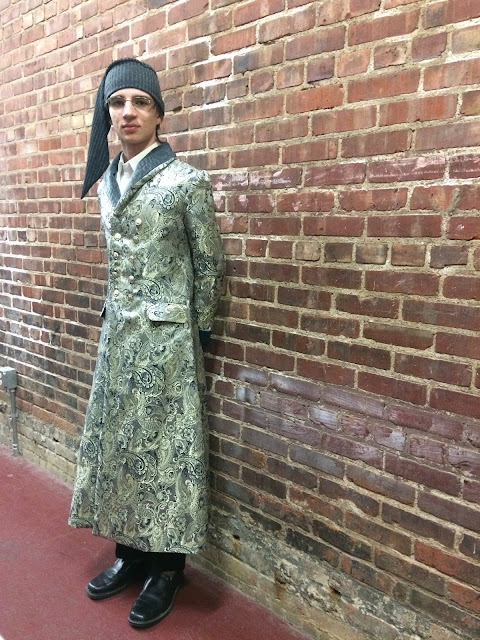 Over the course of one very long (and I emphasize very long) day, I sewed the banyan - real welt pockets, full lining, velvet cuffs, and all. As I neared the end of the project however, I ran into an issue - we'd forgotten to buy buttons for the darned thing! I needed 8-10 metal buttons, and I did not have any sets of the correct size, shape, number, or elaborate-ness in my stash. And I did not want to run into town to buy some - as that would prevent me from finishing the banyan that day. By a stroke of genius, I decided to rummage through my bin of "garments to refashion" - hoping something in there would have suitable buttons. 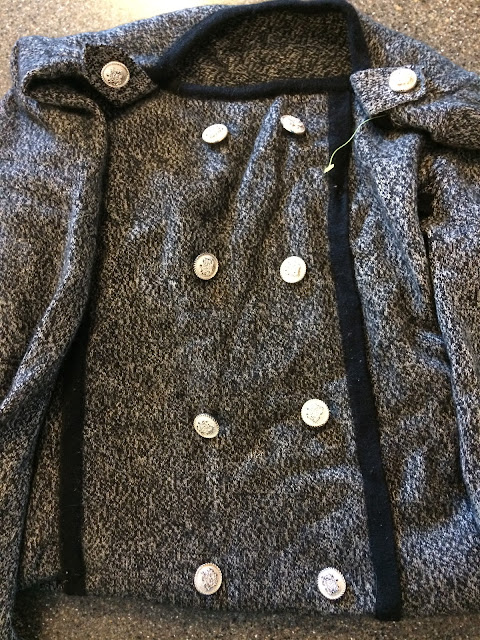 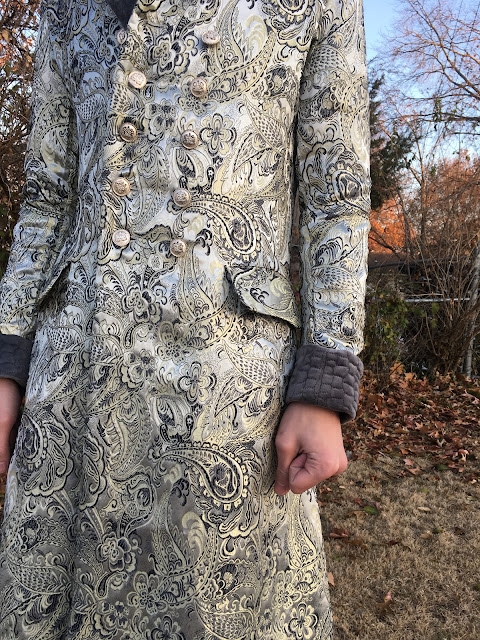 There's only one thing about these buttons that's not perfect and that's the fact they're plastic, painted to look like metal, not actual metal. But oh well, they do the job and look the part - and I didn't have to make a special trip into town to buy them - so I'm not complaining at all! 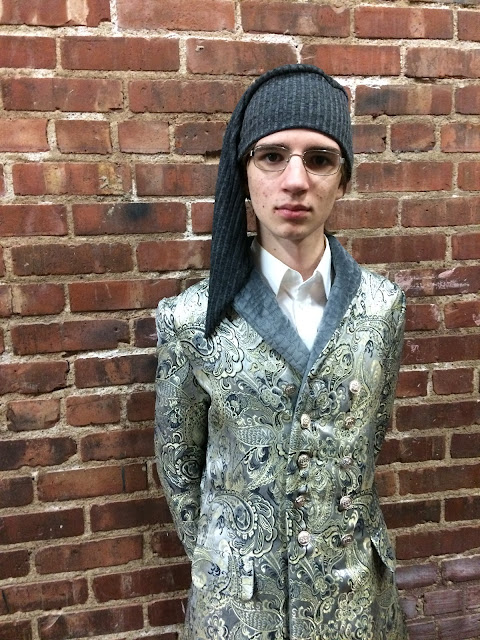 I finished up the banyan just in time for my brother to wear for the Christmas Carol cast photo shoot at a beautiful historic theater in town! 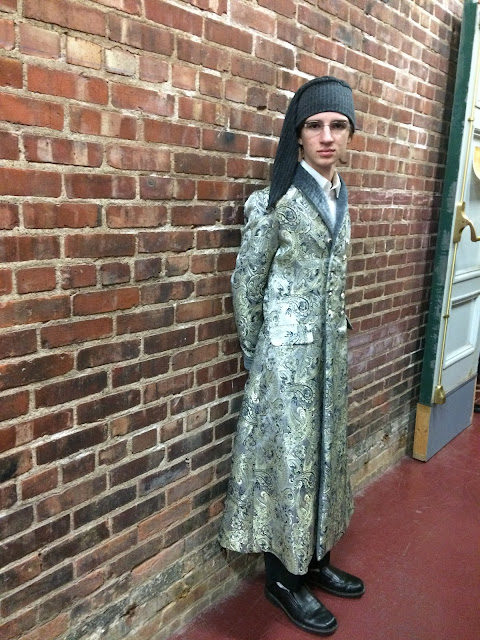 Between the banyan and the nightcap (which I made him months ago, using a santa hat pattern, when he first got cast as Scrooge) he looked the part of Scrooge, dragged out of bed by ghosts to view his past, present, and future. 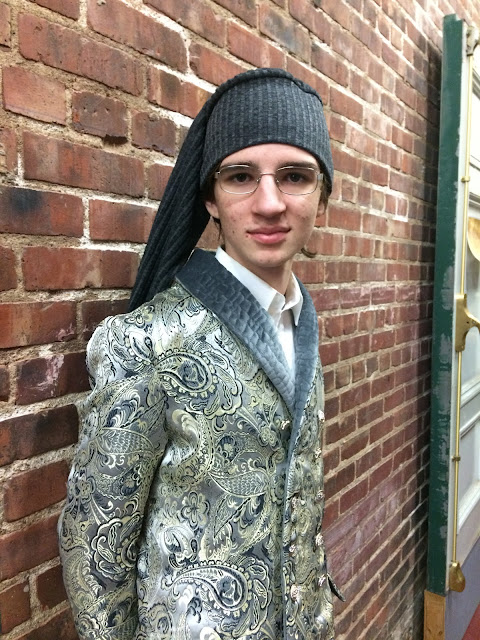 My brother only had one complaint about the banyan - and it wasn't even the sparkleyness (he was rather resigned to that actually). No, apparently the sleeves were too tight and hard to move in. So, after the photo shoot and before dress rehearsal, I slightly disassembled the banyan in order to let out the sleeves as much as I could and add underarm gussets. After that my brother could actually move in the banyan so he did a lot less complaining! 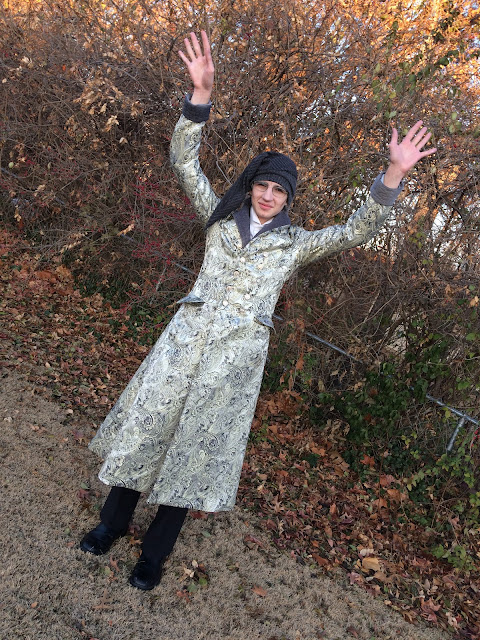 Performance week came and my brother took the stage as the Scroogy-est Scrooge of them all!


He did fabulously, and looked fantastic with his hair and make-up all done! 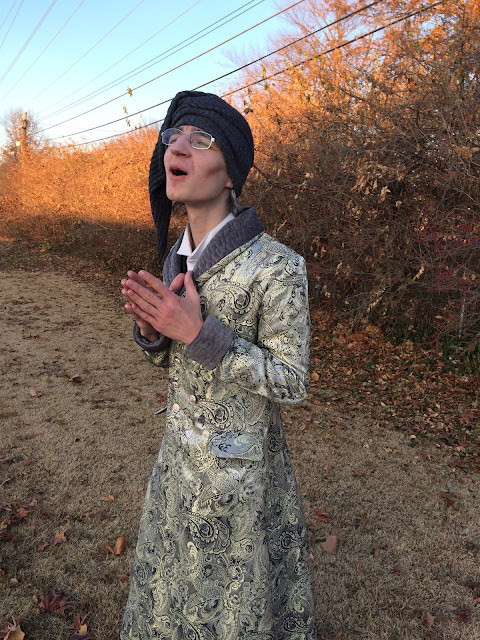 He was dramatic, and changed his ways to better honor Christmas after seeing the horrors his future would contain if he continued as he was - grumpy, and hating Christmas. 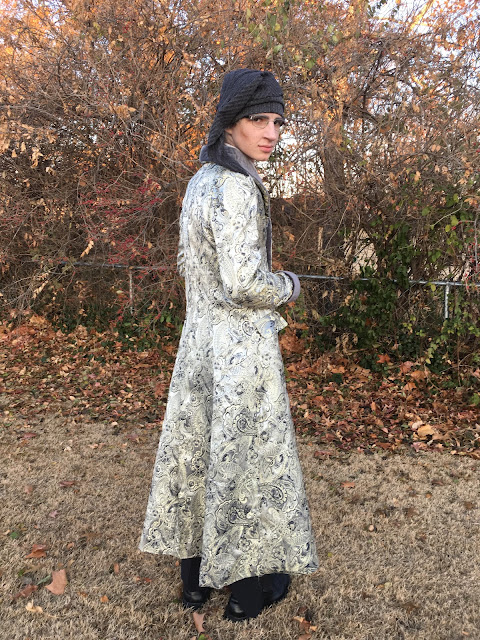 Oh yes, my brother made an excellent, convincing, Scrooge! And, his banyan was not boring at all! Rather, it was just what I hoped it would be - elaborate and eye catching, with close to the correct seam lines and hem fullness for a men's lounging garment from 1830's or 40's. 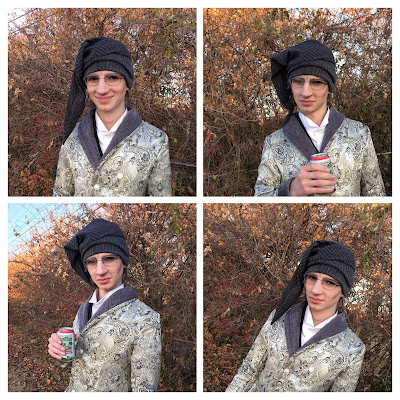 Merry Christmas Everyone! I hope you have a wonderful time with friends and family celebrating the birth of Christ!