The materials, just shy of two yards of maroon wool and a matching maroon silk tie, had been acquired. The pattern, Butterick B6400, had been tried, tested, adapted, and scalloped for my purposes. I ended my blog post the other day with a shot of all my pattern pieces pinned to the wool, ready to be cut out. They just barely fit! 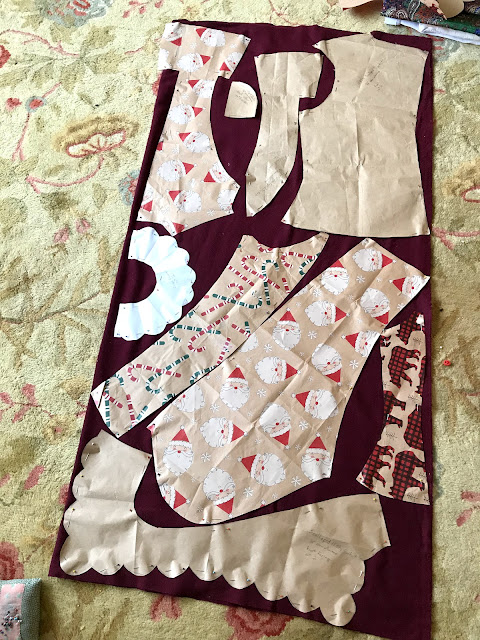 Actually, they didn't quite all fit. I managed to squeeze all the important pieces, those that would be visible when the jacket was worn, onto the wool, but there were three pieces that simply didn't fit. The back hem facing, the sleeve flounce lining, and the sleeve hem facing, all had to be cut from a large scrap of similarly colored cotton broadcloth I found at the bottom of a pile in my sewing room. The cotton wasn't an exact color match to the wool, it is a bit more purpleish, but it was the close enough for facings that mostly won't be seen. 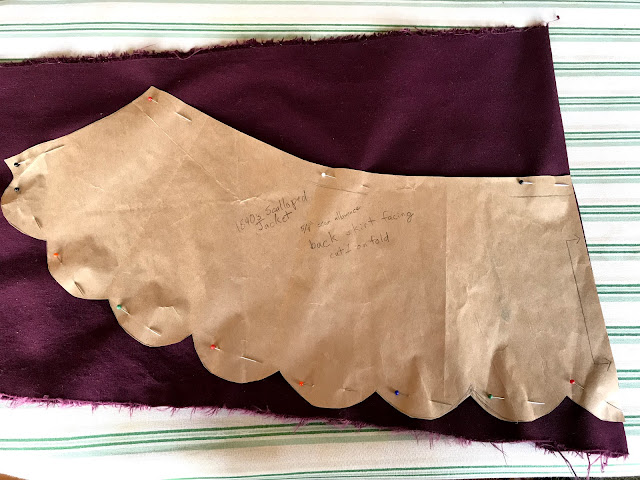 Finally, every last jacket piece was cut out, and all the silk piping was made (mentioned in my previous post) so real jacket construction could begin. As a starting point I read the chapter on jacket and coat making in Authentic Victorian Dressmaking Techniques.
(This is a re-print by Dover Publishing, edited by Kristina Harris, of a Butterick pattern company dressmaking manual originally published in 1905. Yeah, 1905 was Edwardian, not Victorian, and about 7 years later than the jacket I was re-creating, but I figured the techniques explained in the book would have been similar to the ones used a decade earlier, so I went with it.)
I have very little tailoring experience, (I'm more of a dressmaker. Tailoring and dressmaking are two different skill sets) so this chapter on tailored jackets and coats was very enlightening! One of the very first things discussed was how to properly interface the jacket front with hair canvas, pad-stitched in place. It even directed you to a short, but very clear and informative, description of exactly how to do pad-stitching.

Armed with this information, I set about finding a suitable interfacing material for my jacket. Hair canvas, the most correct material, was not to be found locally. After looking through all the available options at Joann's I decided cotton crinoline (lighter and less stiff than cotton buckram, heavier, with a more open weave, than cotton organdy) would do the job. So, I bought a yard, brought it home, machine washed and dried it to pre-shrink and slightly soften it, ironed it flat, then cut the crinoline into the shapes advised on page 85 of Authentic Victorian Dressmaking Techniques. 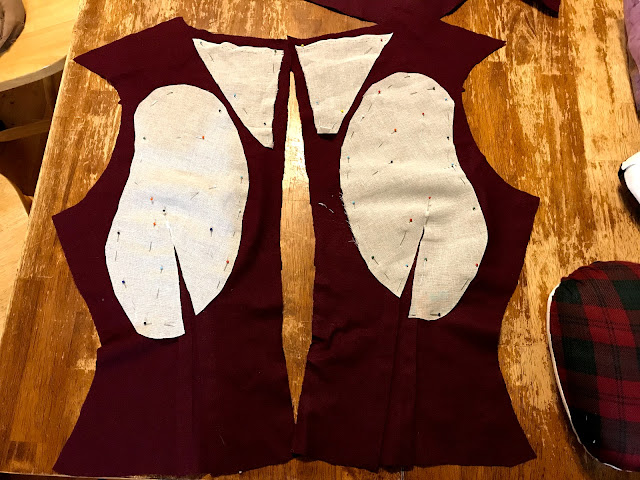 I carefully pinned the crinoline in place according to the diagrams in the book, and then proceeded to spend hours upon hours pad-stitching it in place. This was the longest, most involved, portion of the jacket construction, and I got an awful lot of netflix watching done in the process.

Once all the pad-stitching was done, it was on to general construction and scalloping all the edges. I began by sewing the side seams together, but left the shoulder seams open. I sewed the bottom flounce section of the back pieces together, but did not sew the curved seams of the back panels just yet. This allowed everything to still be laid out flat so it would be easy to work with.

Once that was done I sewed the piping all along the scallops on the front and back facings - which were sewn together at the side seams. 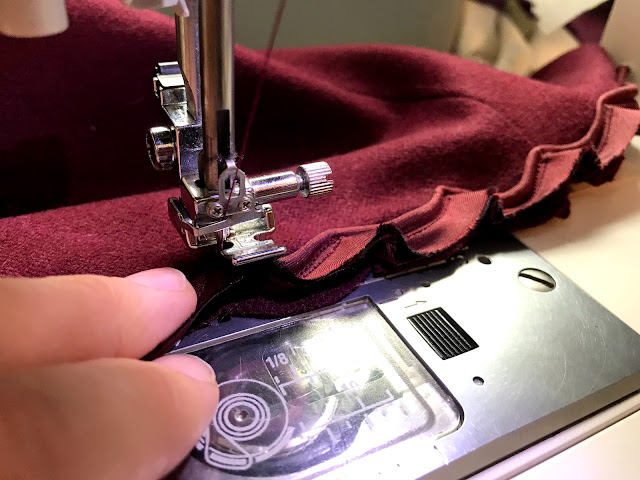 I had just barely enough piping from that silk tie to pipe the entire outer edge of the jacket, the collar, and the sleeve hem. I did not, however, have enough to pipe the bottom of the sleeve flounces, but I decided that was fine.
After the facing was piped, I sewed it to my main jacket pieces, right sides together. I stitched around each individual scallop, clipped and trimmed my seam allowances, then turned it right side out and pressed the scalloped edges. My jacket now had scallops! Once the facing was sewn in place I sewed up the curved back seams, shoulder seams, and attached the collar. Then I tried the thing on and felt like jumping for joy! This thing was turning out just as I'd hoped!! 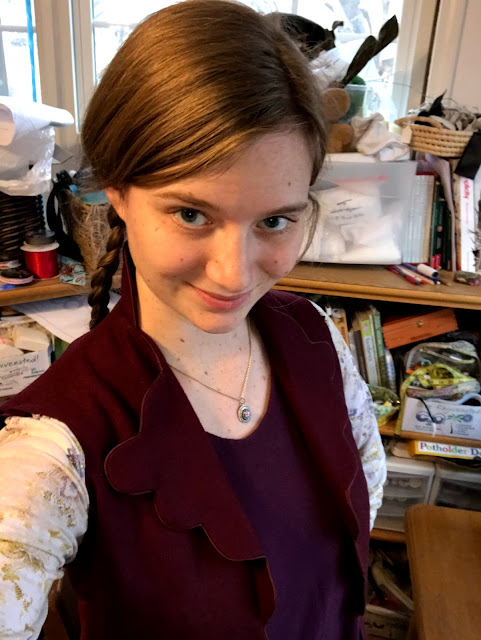 Next up, the sleeves! I sewed the scallops on both the sleeve hem and the sleeve flounce, then attached the two together with a lapped seam. Lapped seams were very common in 1930's and 1940's clothing, but I'm not sure if they were regularly used at the turn of the century. However, it was the only method I could think of which would allow me to sew the sleeve and flounce together without disturbing the scallops, so I went with it, regardless of accuracy. 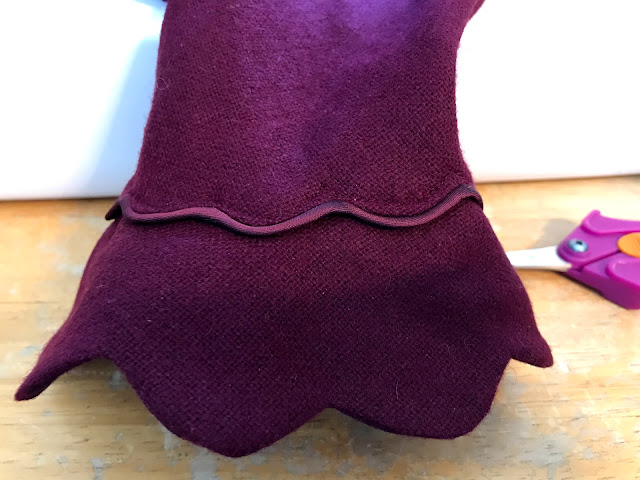 Once the hem and flounce were finished I basted a bias-cut strip of crinoline in the sleeve head to give it a bit of extra "umf", then pleated the top of the sleeve to fit the armscye and sewed it in! 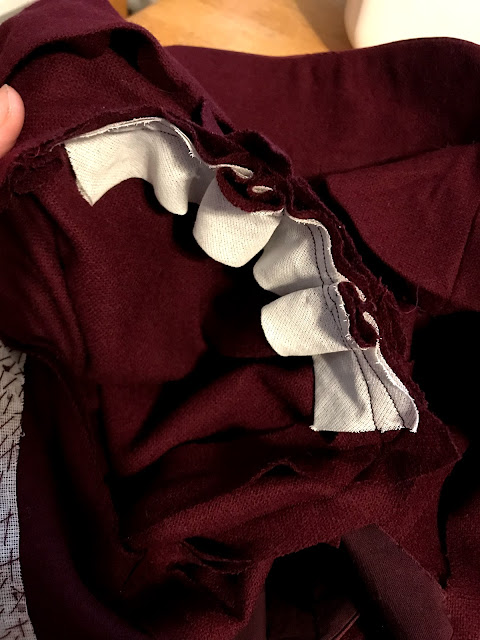 And finally, after two weeks of work, it was on to the final step - lining the darned thing. 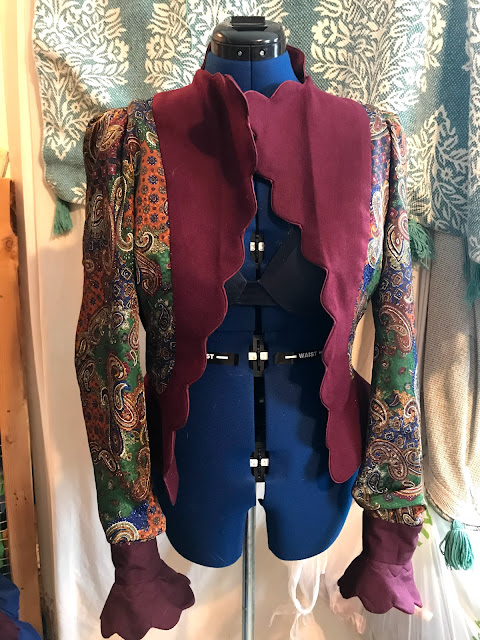 I had one yard of this insane paisley slippery fabric in my stash. It was gifted to me with a bag of wool several years ago and was labeled as silk. Well, the Authentic Victorian Dressmaking Techniques book highly recommended silk linings in jackets, and as I would never be using this crazy paisley for anything else, I decided to use it for my jacket lining. A fun crazy pop of color on the inside that nobody would ever really see. I managed to cut all my lining pieces out of the one yard I had of the stuff. Then it dawned on my that maybe I should do a burn test to make sure the fabric was really silk. I grabbed a scrap of fabric, pulled out a lighter, and held the flame against the fabric. It melted. Yep, this crazy paisley is a synthetic of some sort, not real silk. 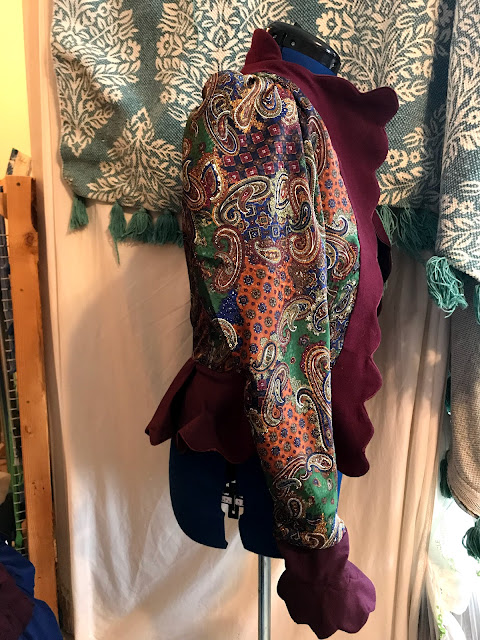 Now I could have scrapped the whole paisley lining idea at this point and found something else in my stash. I hadn't even sewn a single seam on the lining yet! But I had already cut out the lining, and I didn't feel like re-cutting it right then. I just wanted to finished my jacket. Thus, I decided to use the historically inaccurate synthetic lining. 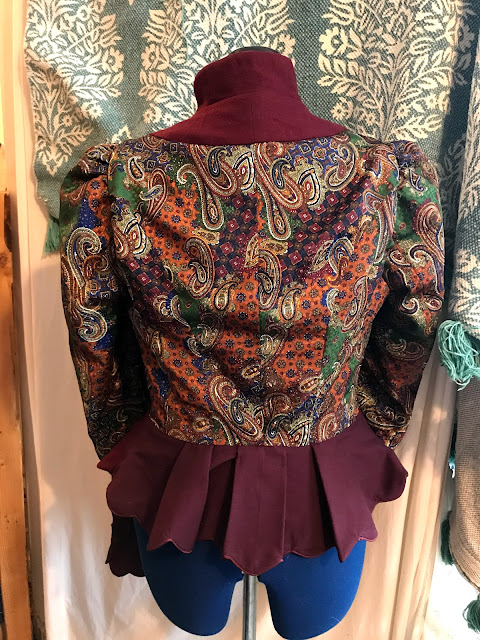 I sewed it together and put it in the jacket. I can always replace it later if the syntheiticness of the material really bothers me - linings are not that hard to replace, especially if they're primarily hand sewn in, as mine is. 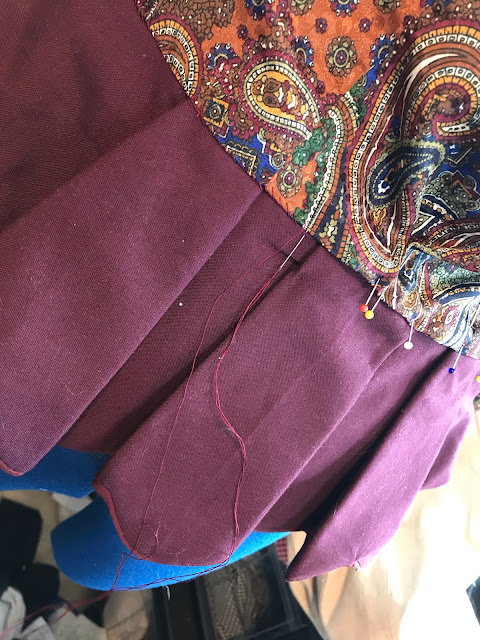 The absolute final step of this jacket was hand-sewing the lining in, which I did with the jacket on my dress form while I listened to an audio book and watched snow falling out my sewing room window. 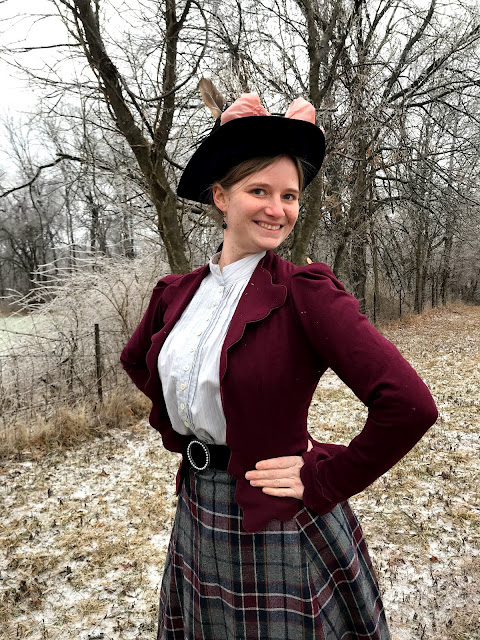 And then it was done, my 1898 scalloped jacket was done! Over a year of planning and it was finally finished! 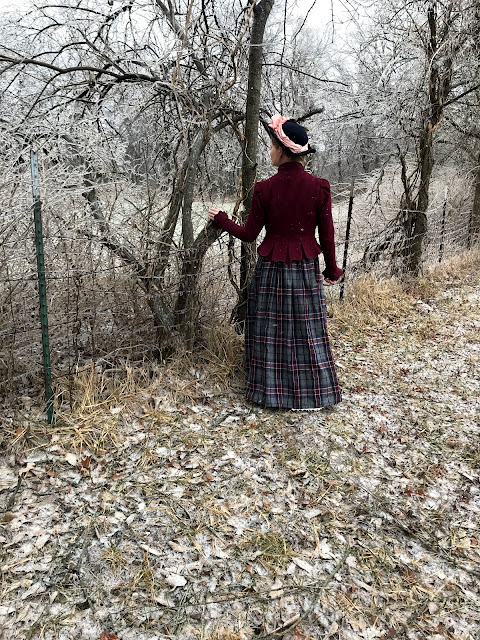 Check back in the next day or two for a whole array of pictures of the finished product!