Several months ago, I made my brother a green shirt. But this blog post isn't about that. However, that green shirt directly influenced the making of this dress. 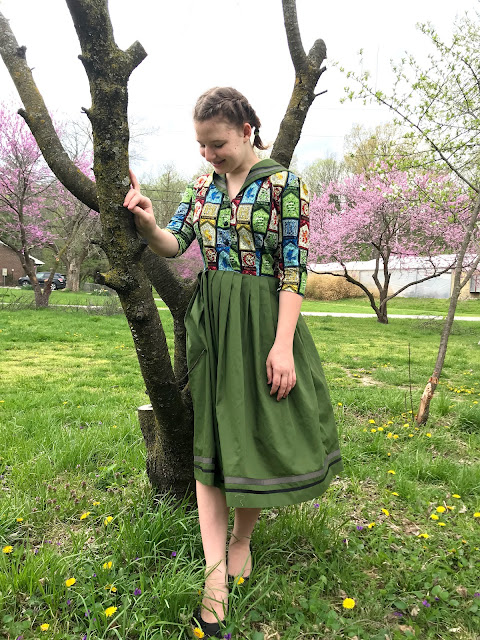 In preparation for making the green shirt for my brother, I pulled every single piece of solid green fabric out from my stash for him to pick from. He chose a very specific shade of green for the shirt, and the rest of the green fabric got left in a pile in my sewing room, rather than put back away right away. 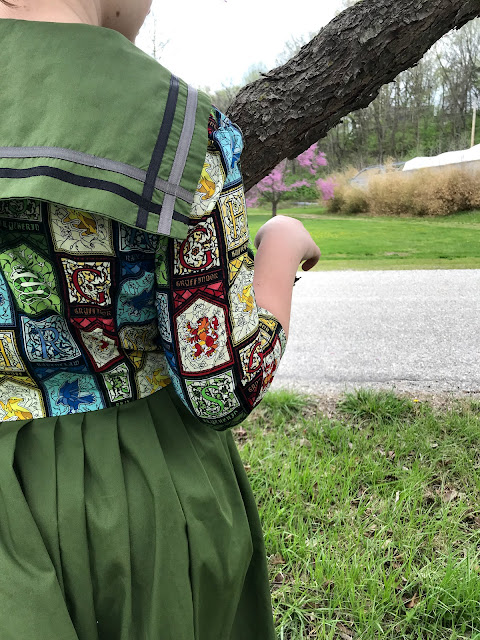 One day, a week or two later, a fantastic fabric combination caught my eye. Laying on another pile, next to the green fabric pile, was a stained glass Hogwarts House quilting cotton, purchased on a whim at Joann's. The green broadcloth on the top of the green fabric pile perfectly matched one of the greens in the Slytherin house emblem on the Hogwarts fabric. Clearly, I had to use these two fabrics together to make something. 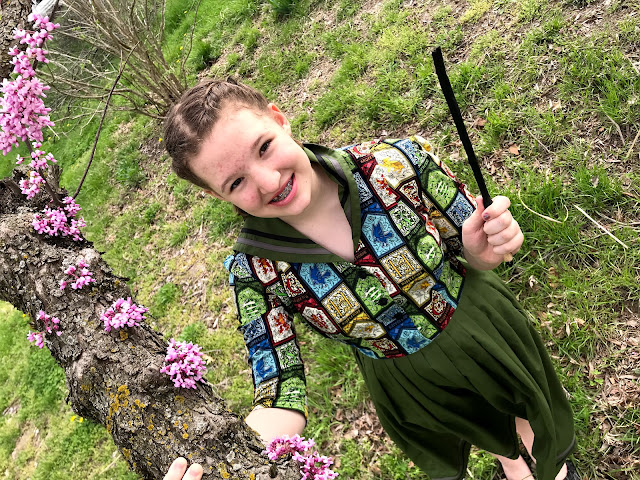 Personally, my Hogwarts house is Gryffindor. As the green material highlighted the Slytherin emblem on the Hogwarts fabric, I did not want to use these two fabrics in combination to make something for myself. My sister however, according to the sorting quiz on Pottermore, is a Slytherin. Thus, the fabric pairing would be turned into something for her. 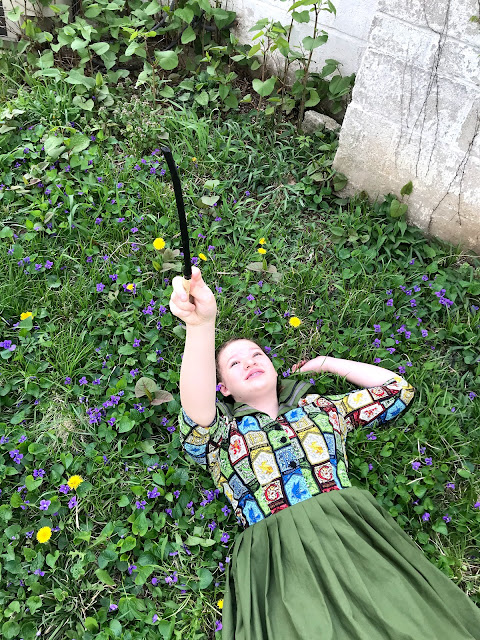 I looked through my pattern collection for inspiration and Simplicity 8481 nearly jumped out of the drawer at me as the perfect pattern for this Slytherin inspired dress. I could make the bodice from the stained glass Hogwarts fabric, and the skirt and collar from the green. 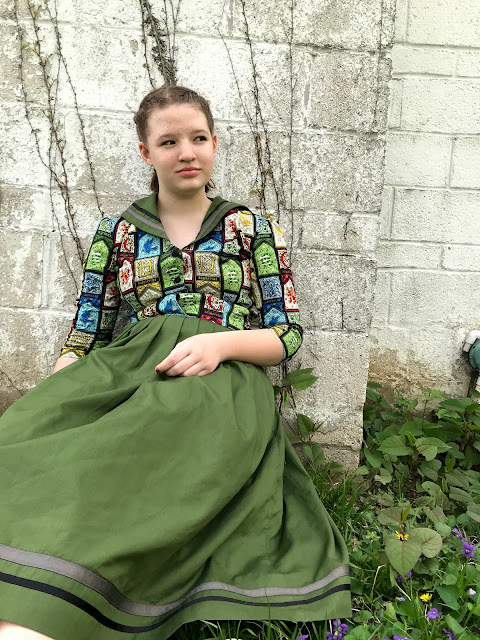 This idea worked out beautifully! In the next week I cut out the dress and worked on sewing it up when ever I could snatch bits of free time between other projects. I told my sister nothing about it. 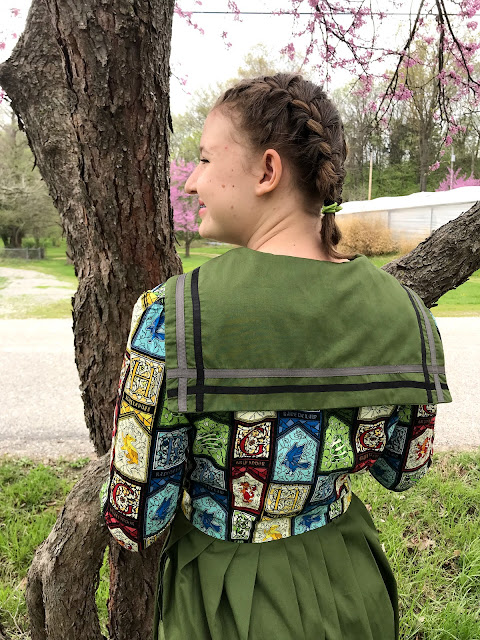 Slytherin House colors are green and silver, so, to really tie the Slytherin theme together, I trimmed the green skirt and collar with gray and black ribbon. 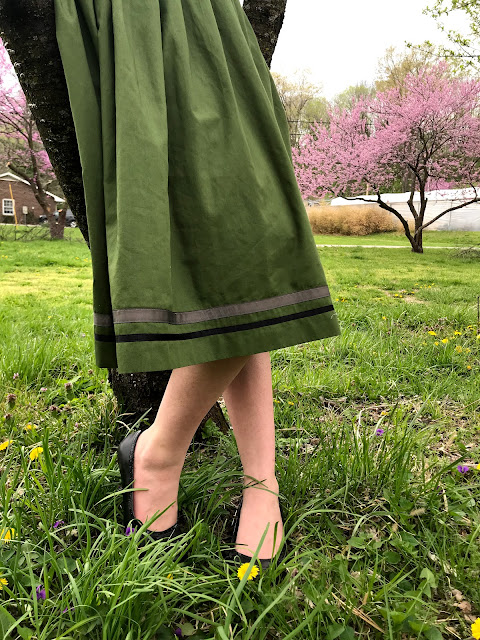 The bodice was finished off with three fancy black shank buttons, which I picked up on clearance somewhere at sometime or another. 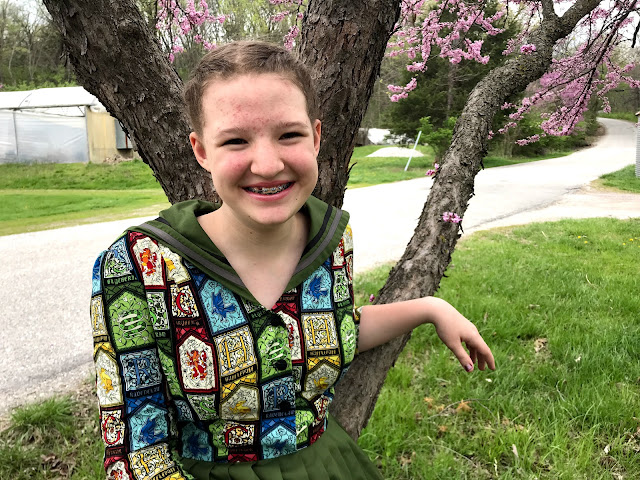 Speaking of the bodice, the dart placement on this pattern is a bit different than any of the other darted bodice patterns in my collection. It's fitted with two darts on either side, which is normal enough. However, rather than one dart coming out of the side seam and one coming up from the waist seam, as is standard, one comes up from the waist seam and the other comes down from the shoulder seam. With this arrangement, the darts almost form a princess seam. A little different, but the bodice fit is very nice so I wouldn't hesitate to use a pattern with this dart arrangement again. 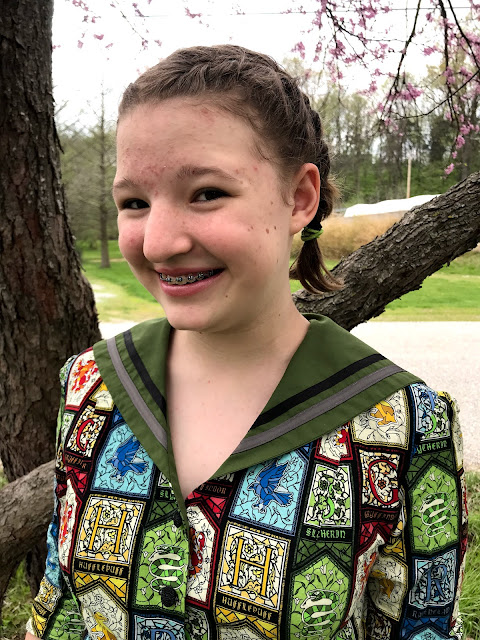 The dress fastens with a side seam zipper, and has wonderfully large pockets hidden in the skirt - the perfect place to stash a wand! (Wand pockets are very important in the Wizarding World) 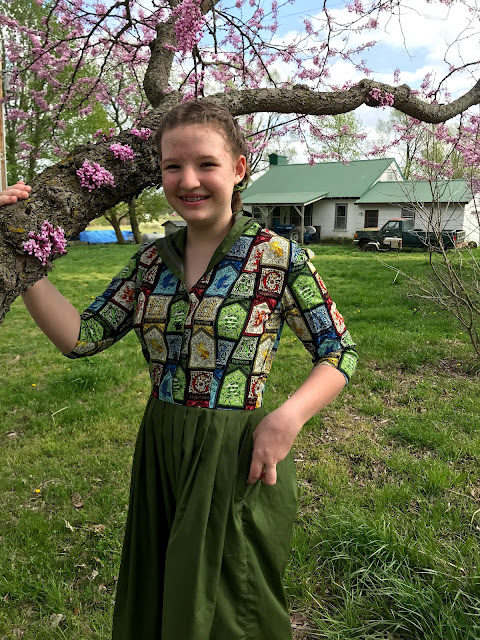 Once I finished making the dress, I called my sister to my sewing room to present it to her. 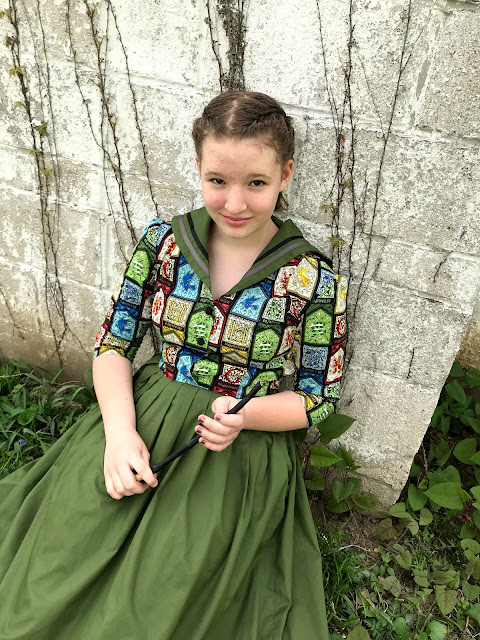 She was surprised and thrilled, immediately declaring she would wear it to her homeschool co-op meeting the following Monday - which she did. 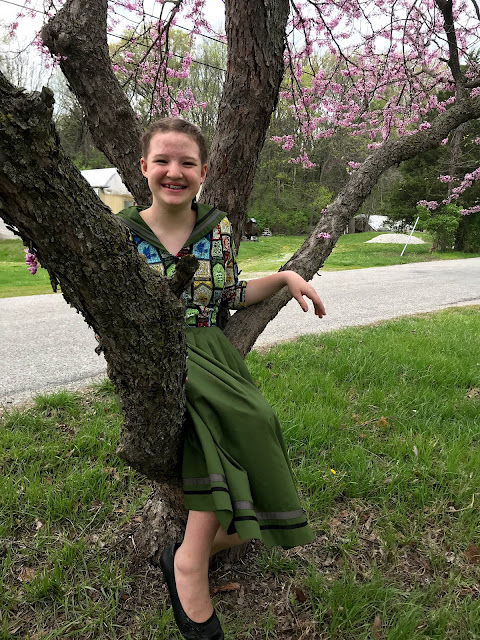 She has been wearing this dress regularly ever since - but it took a couple months for us to get around to photographing it. 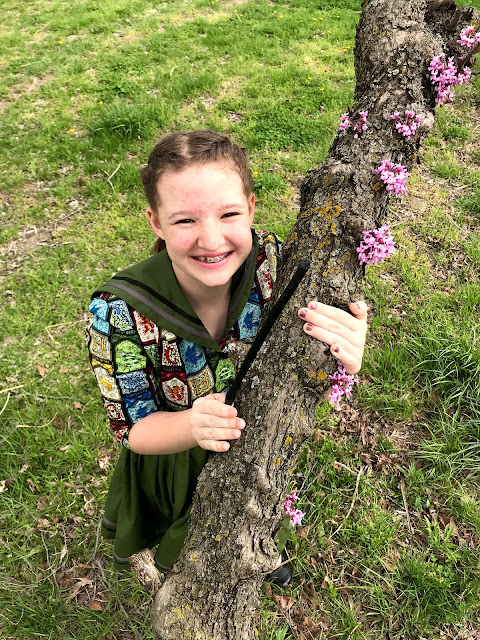 When I made the dress, winter still had its grip on the world, and snow was falling from the sky regularly. By the time we photographed it a few weeks ago, the world was alive with color and spring. No more bare, gray, trees and brown, dead, grass. The Redbud trees blossomed purple. The ground was littered with pretty little violets and dandelions were beginning to appear. The grass had turned green and little leaves were beginning to appear on the trees. 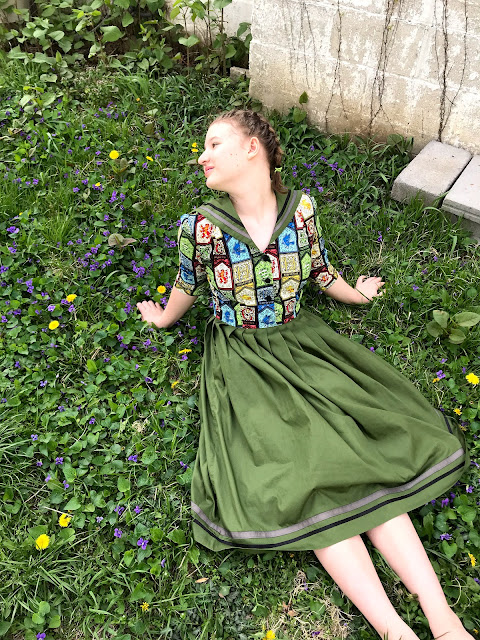 To really up the Wizarding World impression of the dress for the photo shoot, my sister pulled out the wand she carved herself, to go with her Beauxbatons' outfit. She had great fun with this prop. 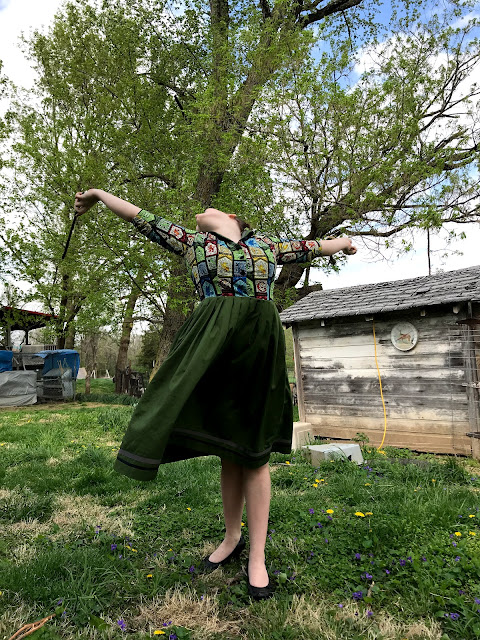 I'm not entirely sure if she was hexing me, or charming me, while I told her to hold still for pictures. 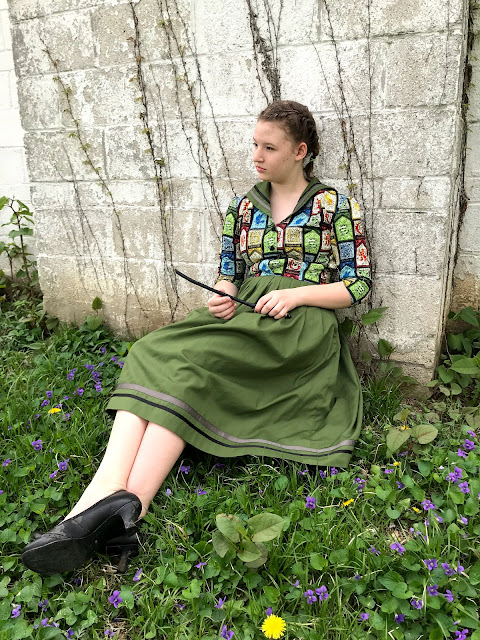 Either way, her spells have had no lasting damage, and, months after making it, I still really like how this dress turned out! 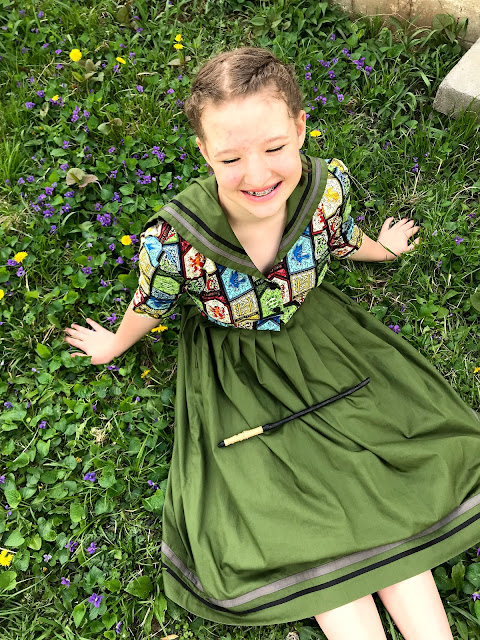 Sometimes it's entirely worth not returning your fabrics back to their rightful place right away - as you never know what magical combinations you may discover when fabrics are out and visible! 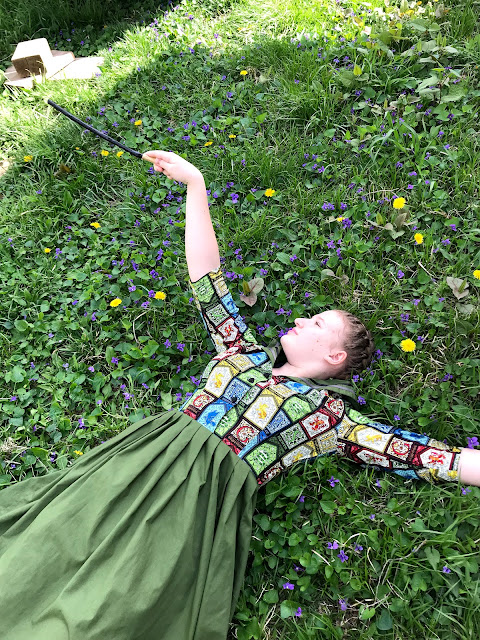 Posted by Alyssa at May 18, 2019
Email ThisBlogThis!Share to TwitterShare to FacebookShare to Pinterest
Labels: Little Sister, Sewing, Wizarding World