A Magenta Silk Turban Cap to Spice Up the Regency Dress

Next month my little sister is having a Pride and Prejudice themed birthday party. Thus, I need a regency outfit to wear. 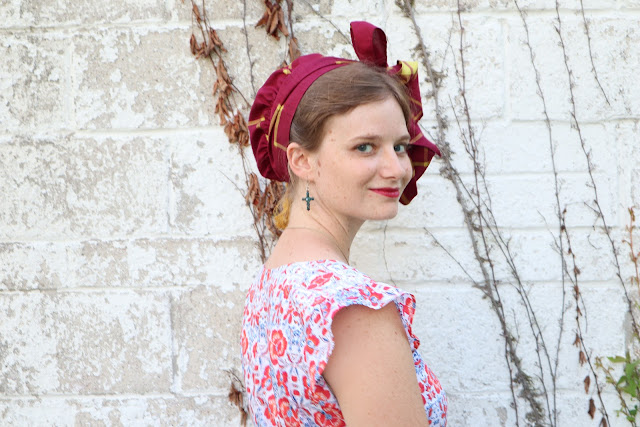 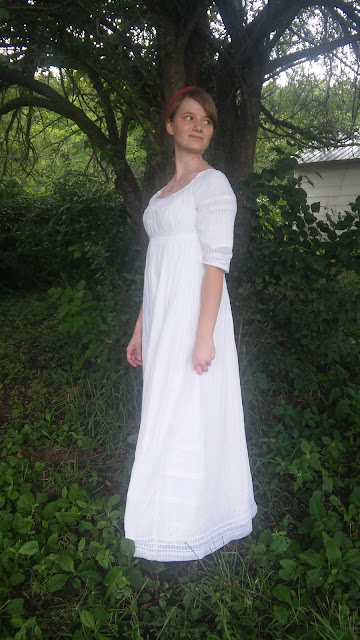 Of course, when I made the dress I had loads of ideas for accessories to make to go with the dress. Then I made none of them. Thus, my regency era wardrobe consists of a corset, a bodiced petticoat, a plain white dress, and a green velvet spencer jacket. No head wear. Nothing to fill in the the neckline of my garment. Only one outer garment, which is only comfortable to wear when it's cold out. Really no options for changing up the look of the dress. Especially not in the summer. That needs to change. Before my sister's birthday party. 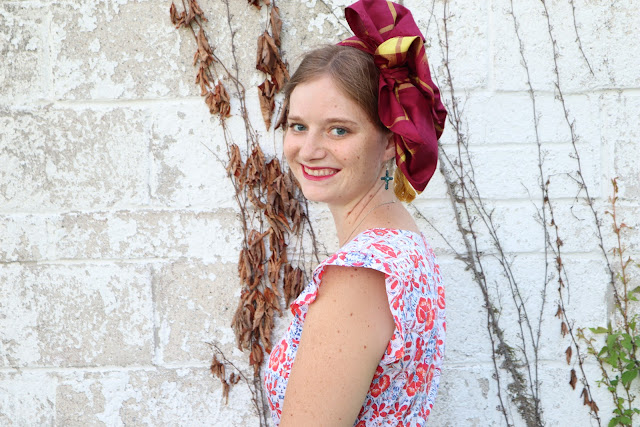 As the most glaring hole in my regency wardrobe is the lack of head wear, I decided to start there. While I was in Japan in June I picked up a length of magenta and gold silk at a recycle shop (the same shop where I found this box of sewing supplies.) When I decided I needed some new regency things, it was the first piece of fabric that sprung to mind. 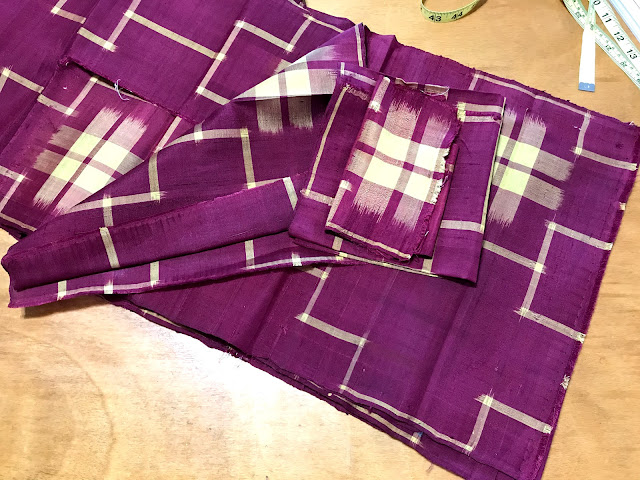 I can't say the golden yellow cross-hatch design woven into the magenta background is historically accurate. I've never seen anything patterned like it in pictures of extant regency garments, fashion plates, or portraits. Yet, for all that, the colors and design made me think of the regency era fascination with things oriental. Accessories from this material would definitely add a bit more interest to my white regency dress. With this in mind, I decided to begin my accessorizing with a turban head dress of some type. 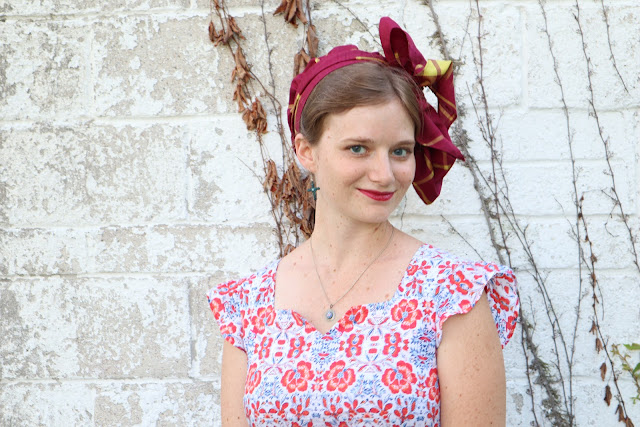 I quickly decided I didn't want my turban to just be a long length of silk I would have to fiddle with wrapping just right each time I wore it. Instead,I wanted something that would give the right look but hold it's shape better - a head dress which would look like a turban but be constructed like a cap. I looked at some regency era fashion plates (specifically those from between 1800 and 1806 as that's the approximate era of my white dress), and through my costuming books before deciding to make the "Vigee Le Brun" turban cap from The American Duchess Guide to 18th Century Dressmaking. This turban cap is meant to be based off those from the 1790's, but to me the shape really doesn't look any different from that of the turban caps from a decade later, so I decided this pattern would work quite well for my purposes. 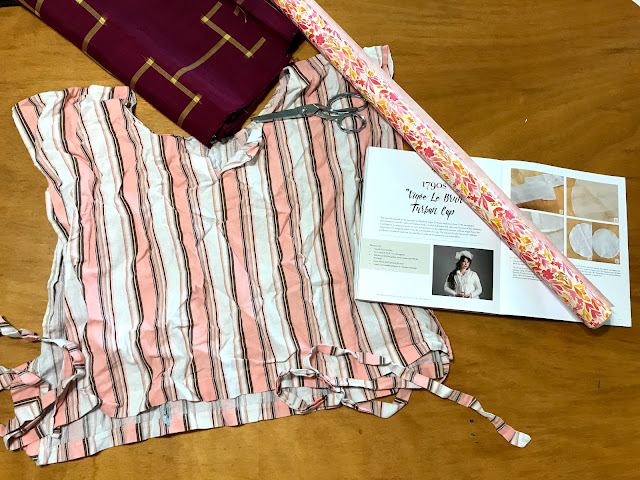 The turban cap in the book has a linen lining with the silk "turban" layer mounted to that. I went to my stash to find a scrap of linen for the lining and came up with this linen/cotton blend wrap top I made myself several years ago. (it's made out of the fabric left over from mom's regency dress) The top worked much better in theory than reality and only got worn once before going back into my fabric stash. As a turban cap doesn't require a whole lot of lining material, I decided it was finally time to cut this thing up. 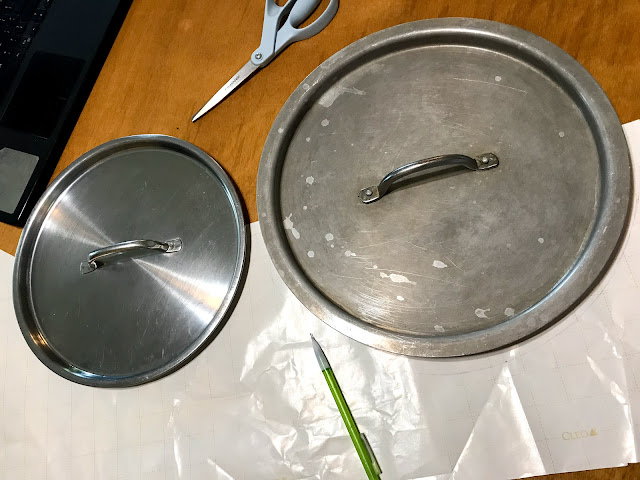 I "drafted" the pattern from the book onto some wrapping paper which had a 1" grid on the back of it - ideal for drafting patterns! The pattern consists of two circles and three rectangles so it was very easy to make. The rectangles could easily be drawn onto the grid. As for the circles, I found two metal lids of the correct diameter in the kitchen and just traced around those to get my circular pattern pieces. 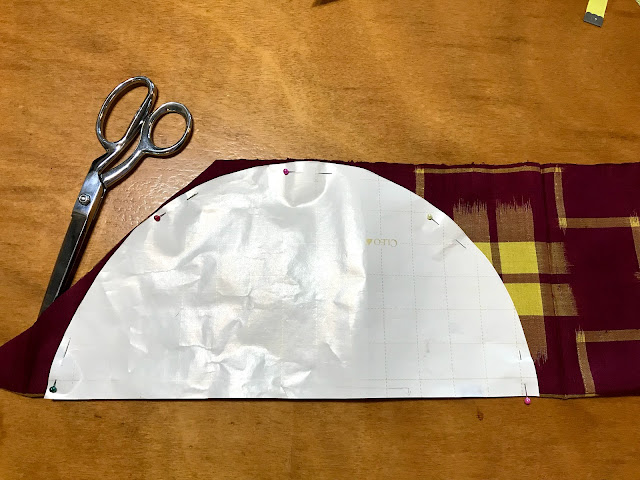 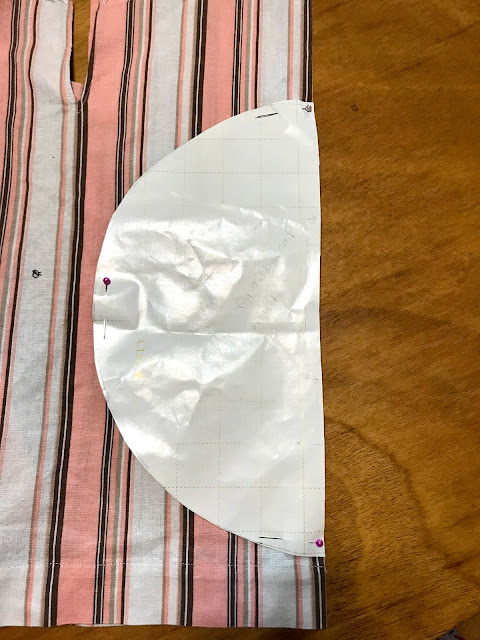 The band, which the circles would be mounted onto was cut out of both the linen and the silk. 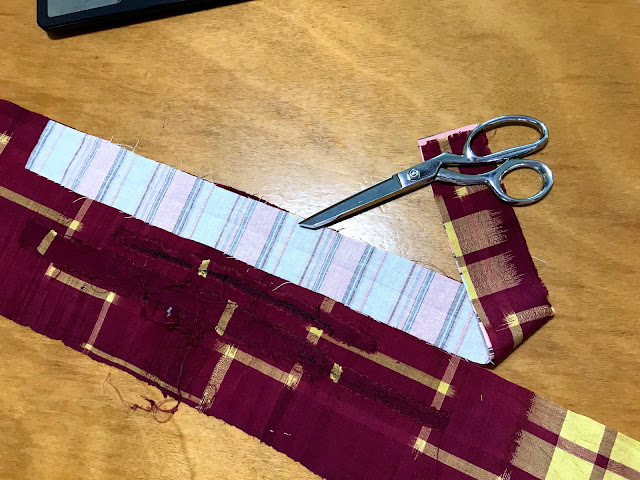 The pattern only called for the band to be cut from linen, as it should be covered by wide silk ties, which are attached at the back of the head dress and wrap around to tie at the front, when ever the turban cap is worn. I was worried the ties might slip and reveal the band occasionally during wearing, so I decided to cover the linen band with silk - and I'm glad I did! 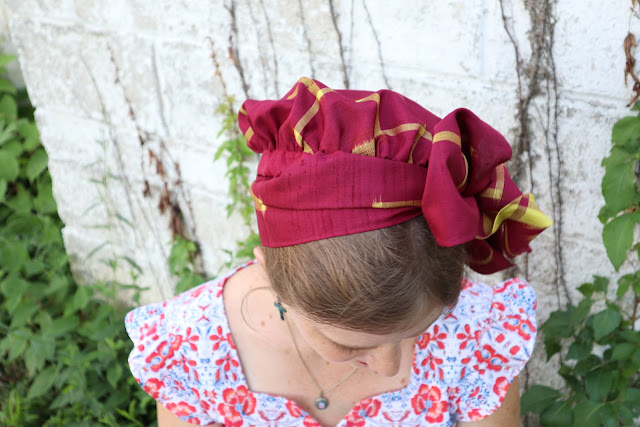 Finally, I cut two long rectangles of silk for the ties then I began assembling my turban cap. The American Duchess book give instructions for completely hand sewing the turban cap, but as I wanted to finish mine in a single afternoon, I opted to use my sewing machine for the bulk of the construction. 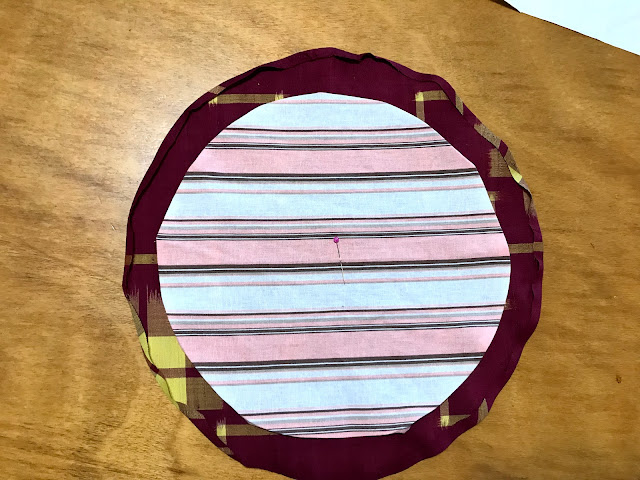 First I layered together the smaller linen circle and the larger silk circle, matching center points. Then I pleated the large circle to match the smaller circle. 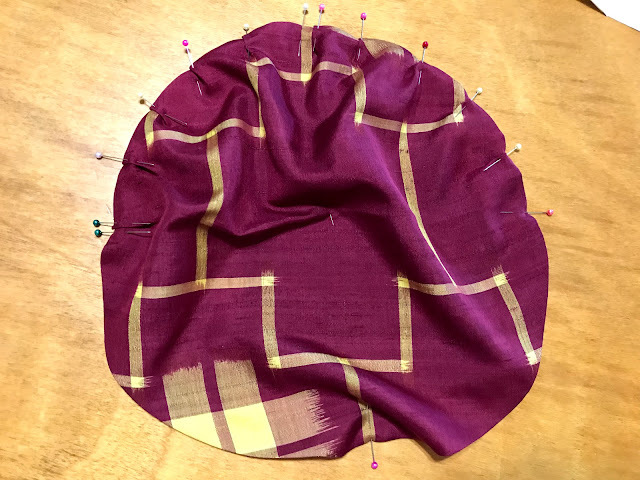 After the larger circle was pleated to the smaller circle, I gathered the edges of the two together to be attached to the band. I did the gathering on the sewing machine as per this corded gathering tutorial. 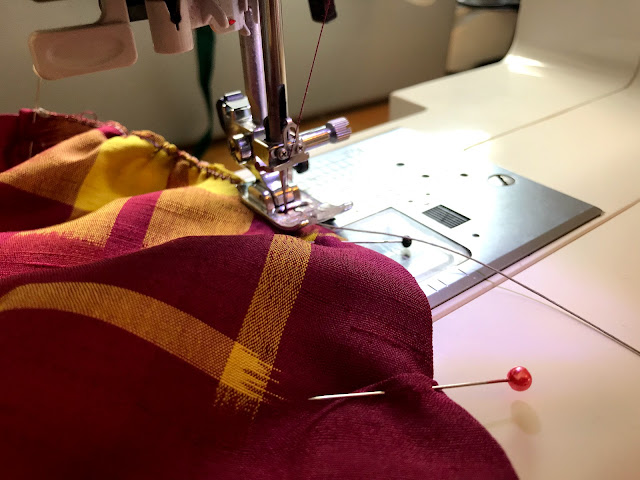 With the circles gathered and ready to go onto the band, I actually had to make the band. I sewed the linen and silk bands to each other, right sides together, along one long edge and both short ends. Then I turned the new double layer band right side out and proceeded to construct it as the American Duchess book recommended. 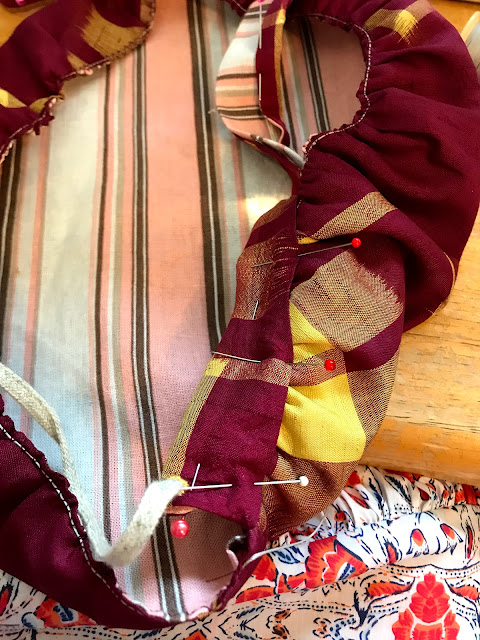 I hand sewed an eyelet at each end of the band using yellow silk thread, then made a drawstring casing by folding up the bottom edge of the band about 3/8". 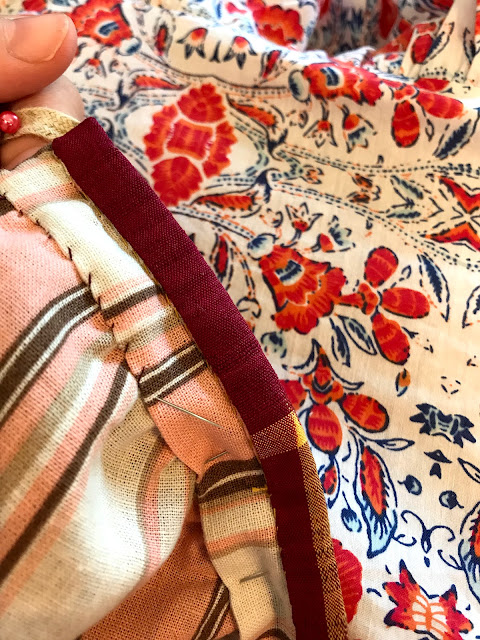 Once the drawstring casing was made, I sandwiched the gathered circle circle edge between the linen and silk layers of the band (along the long edge of the band I'd left unsewn), and hand sewed the circle to the band. 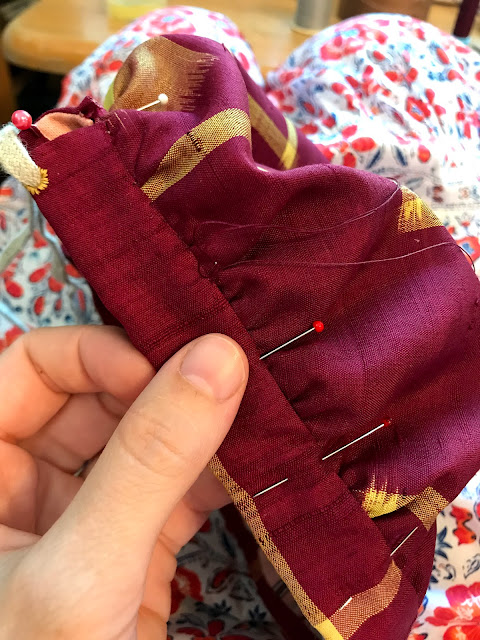 Finally, I was ready to add the long ties which would help this head dress resemble a wrapped turban when worn. I took my two long strips of fabric and narrowly hemmed the raw edges by machine. 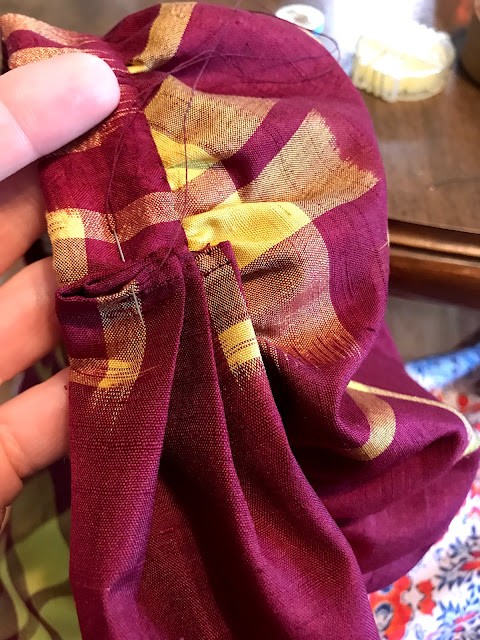 I pleated one end of each strip to be just a bit wider than the band, then hand sewed each pleated strip to the band at the back of the head dress. 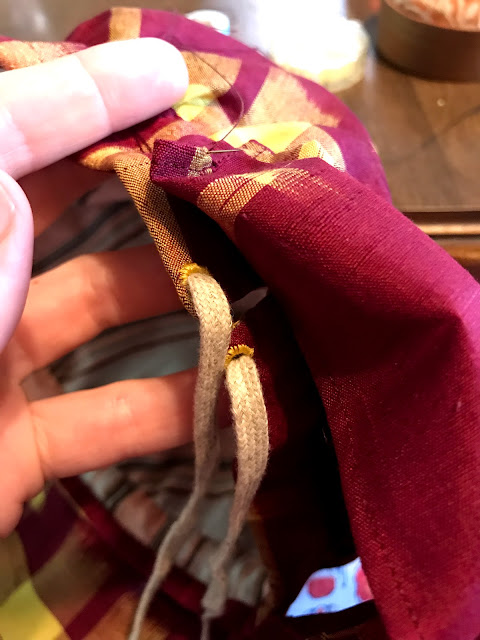 The strips are each sewn an inch or so from the center back of the band where the eyelets and drawstring are. When worn, these strips are crisscrossed across the back of the cap, hiding the drawstring, and wrapping around to be tied in a large bow in the front. 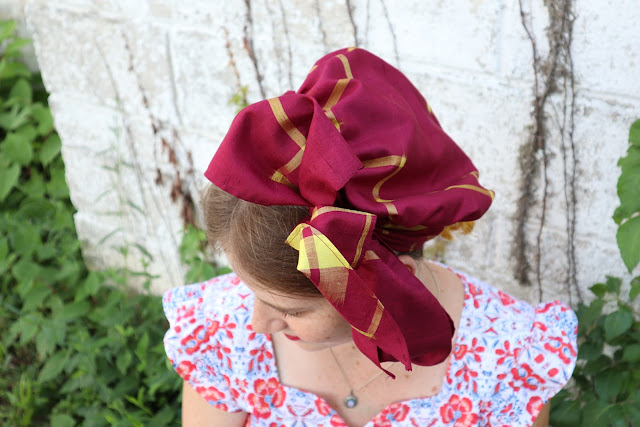 As a finishing touch, I made a yellow silk tassel and attached it to the center back of the turban cap. I saw a regency era turban cap with a tassel on it in the Kyoto Costume Institute Fashion book, and decided it would be a fun detail to add to my cap. 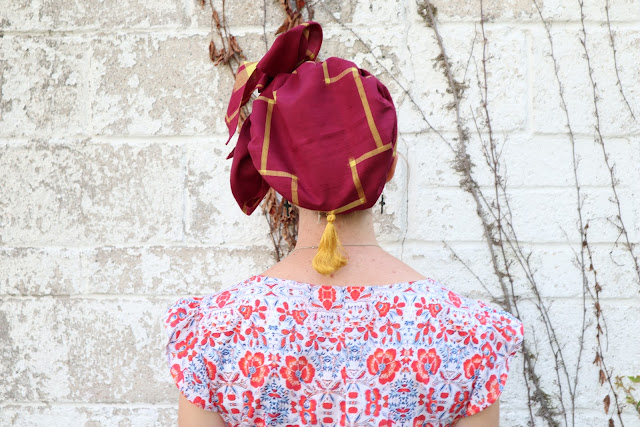 With the tassel securely stitched in place on the back, my turban cap was done - all ready to add some pizzazz to my white regency dress for the birthday party next month. 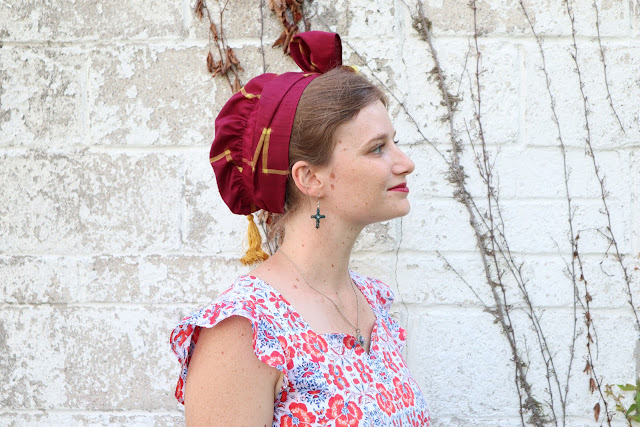 I actually like how it turned out better than I'd expected to. Until recently, I never really appreciated the regency turban. 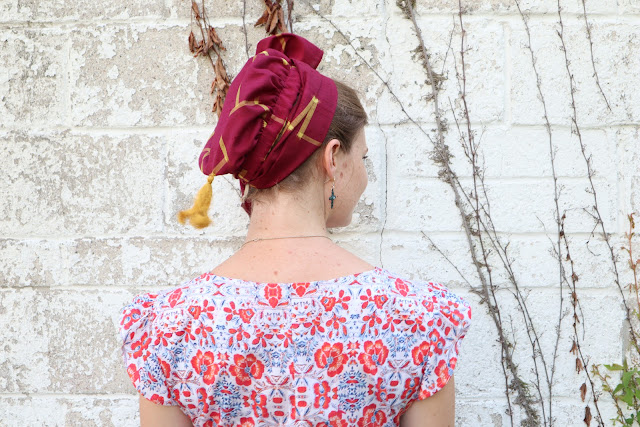 This accessory is remarkably easy to wear, and quite eye catching. 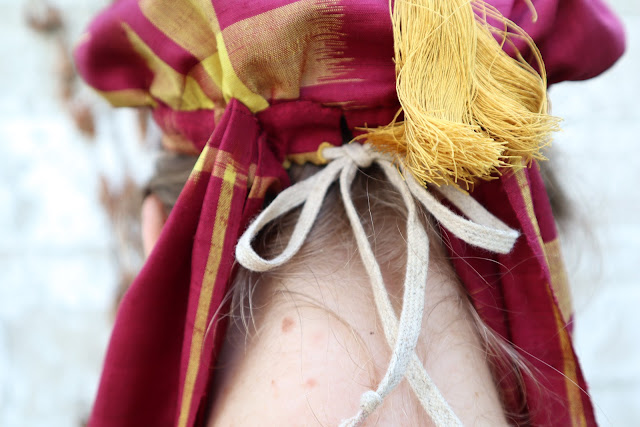 The drawstring in the band keeps it fitting tight. 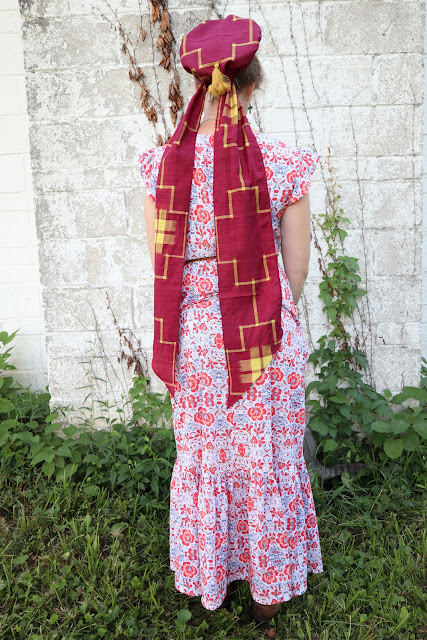 And the long ties and tassel add just the right amount of drama! 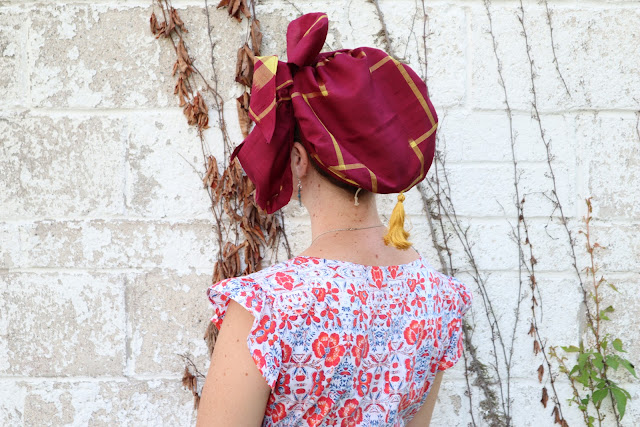 And, to top off my good feelings about this project - I managed to finish it before the end of July, so I actually had something qualifying for the Historical Sew Monthly July challenge "Unexpected Feature". (I didn't get anything finished for the June challenge, and was worried I'd miss July too!) 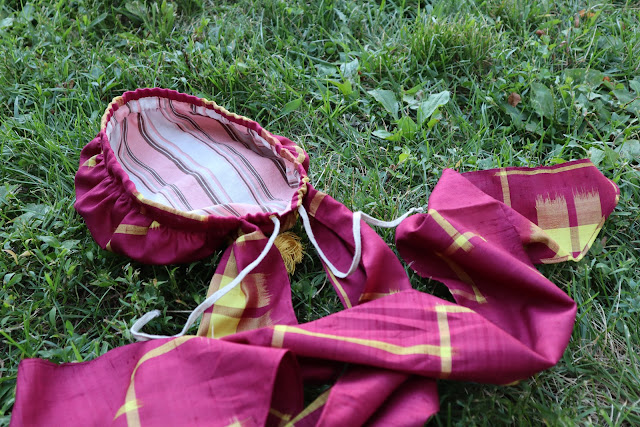 What the item is: A Regency turban-cap

Pattern: "Vigee Le Brun" turban cap from the American Duchess Guide to 18th Century Dressmaking
Year: The book labels this as a mid 1790's design, but I've seen similar head dresses in later Regency era fashion plates as well. So 1795 - 1815ish? I will be wearing it with my 1800 - 1805 gown.

How historically accurate is it? It's a mixture of hand and machine sewing. The pattern and construction method are guesses as to how this type of head dress might have been made, rather than an exact copy of something. The linen/cotton lining should be all linen, and the stripe pattern isn't accurate. This silk has an interesting pattern woven into it, which I don't believe would be accurate to the era, but the fiber content is good at least. So all together, I'd say around 50%

Hours to complete: 5 hours, including patterning.

First worn: 7/28/19 just to try on and take pictures. I'll wear it for "real", with the right dress, in September for my sister's Pride and Prejudice birthday party.

Total cost: I paid approximately $10 usd for the length of silk at a recycle shop in Japan, and I have lots left over, so probably $2 for the silk I did use. The spool of yellow silk thread cost $3 on sale, and I used about half of it to make the tassel and hand sew the eyelets. Add in the scrap of linen I used for lining, the linen cord I used for the drawstring, and the all-purpose thread I used for machine sewing, and this probably cost about $7 to make. 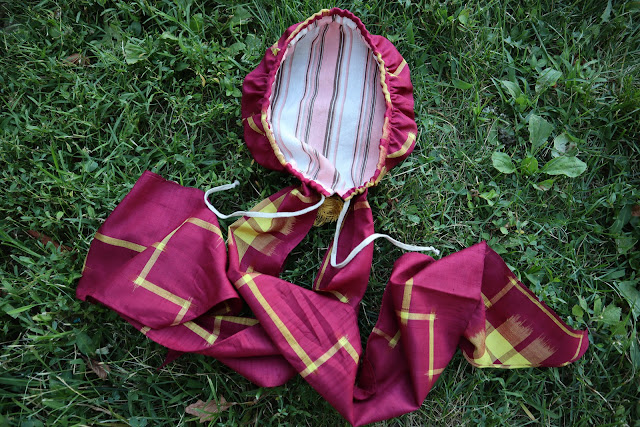