A Francaise Dinner with the Saint Louis Georgian Sewing Society. It sounded like great fun, and a fabulous excuse to dive deeper into 18th century costuming and make a new gown for myself. Well, it was fun (though I completely forgot to take pictures sadly!). There were over 20 of us dressed up in 18th century fashion from the 1740's through about 1800. We enjoyed dinner at a restaurant in a building which had been around since the colonial era. The food was good and the company was wonderful. 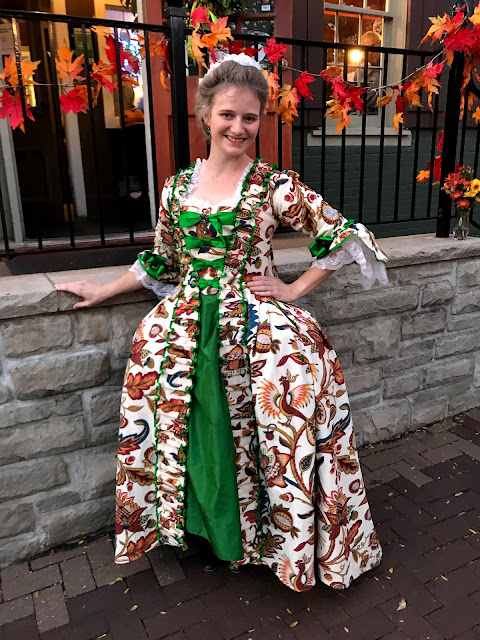 When I signed up for this dinner months ago, I thought for sure I'd have time to sew a new gown for the occasion. However, that was not the case, large family events come up in the ensuing months, and my sewing time was otherwise spoken for. Thus, my 1760's, sacque-back, bird gown was to be worn again! And really, I can't complain about re-wearing this dress. I love how it turned out, so the more I get to wear it, the better! 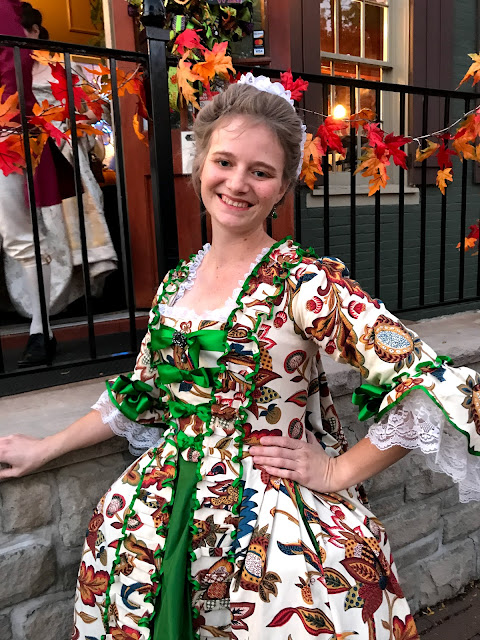 I dressed up my gown with a new green silk petticoat, some fresh white lace, and a bejeweled costume brooch. Then, to finish off the look I attempted to coerce my hair into a 1760's hair style and topped it off with a fluffy, lacy, triangular, white cap. 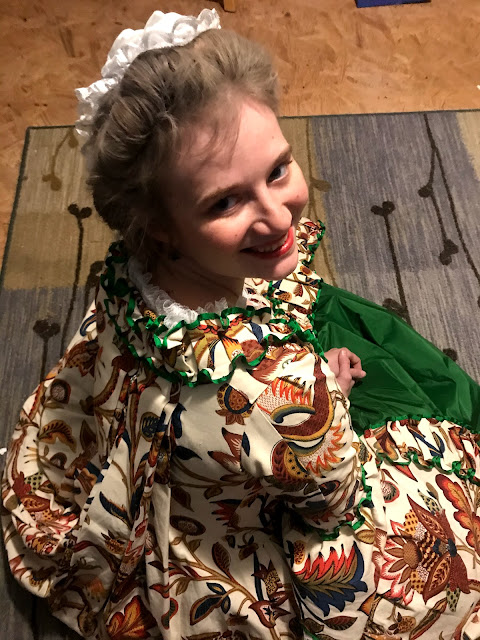 Actually doing my hair for this event was one of the most intimidating parts of historical costuming I've encountered thus far - either it was going to go ok, or it was going to go horribly. And I was fairly sure "horribly" was the more likely outcome. 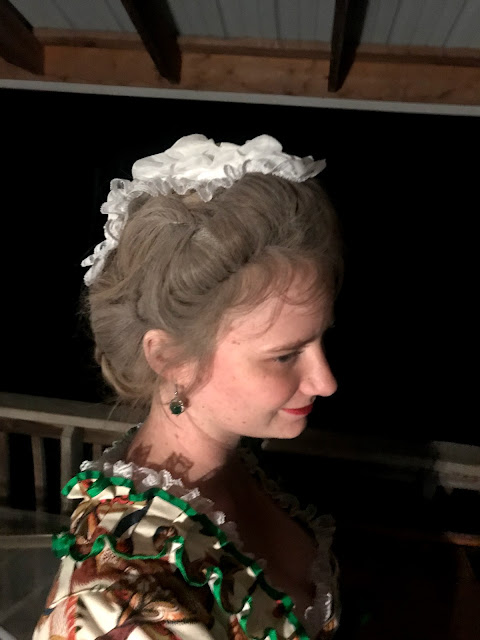 I began, weeks in advance, by pulling out my copy of The American Duchess Guide to 18th Century Beauty, which I received for my birthday this summer. I read up a bit on styling hair, looked at some 1760's portraits online, and decided I would attempt to do the 1765-1772 style in the book - the "Coiffure Banane", as it matched the time period of my dress. 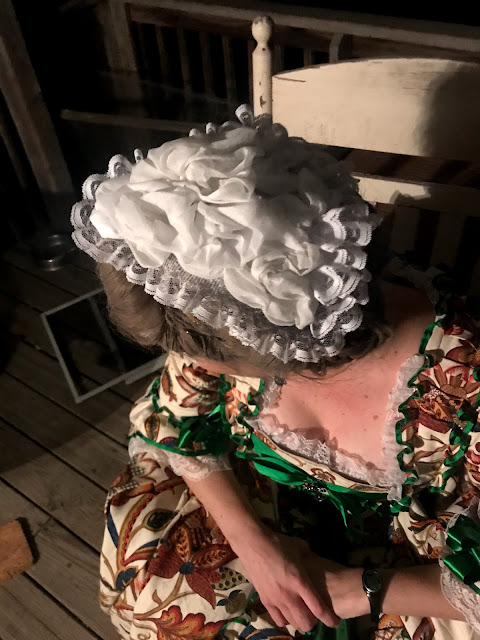 Along with the hairstyle, I also needed appropriate head wear for the occasion. So I picked the fluffy triangular cap, called the "Proto Pouf" in the American Duchess book, which went along with my proposed hairstyle. 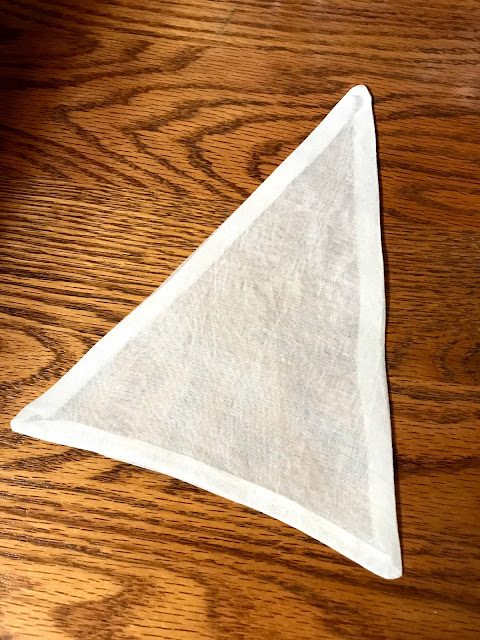 I started, two days before the dinner, by sewing the triangular base for the cap using the dimensions given in the book (page 82). I used a very stiff, slightly sheer, mystery fabric I found in a box of fabric someone gave me. It resembles silk organza (it's definitely not a synthetic, I could tell that from a burn test), but I'm not entirely sure that's what it is. I had about 1/2 a yard of the fabric, which was just the right amount for this project.

I sewed the base triangle by machine, two layers of fabric, sewed right sides together, then turned right side out and pressed. I skipped the wire around the edge, which was recommended in the book, and it turned out just fine. 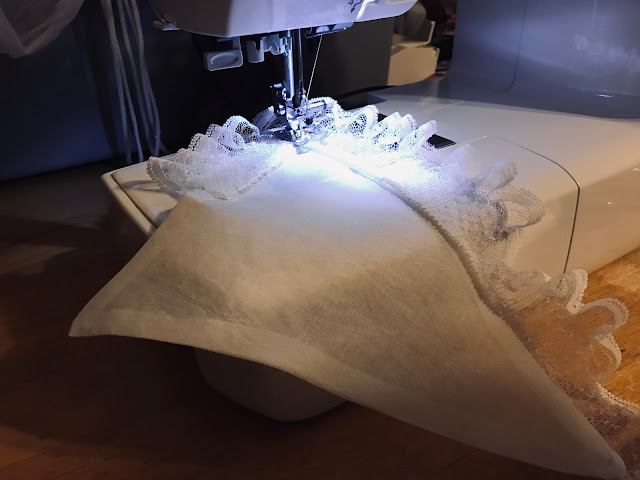 I then sewed some pre-gathered lace around the edges of the triangle, also by machine. 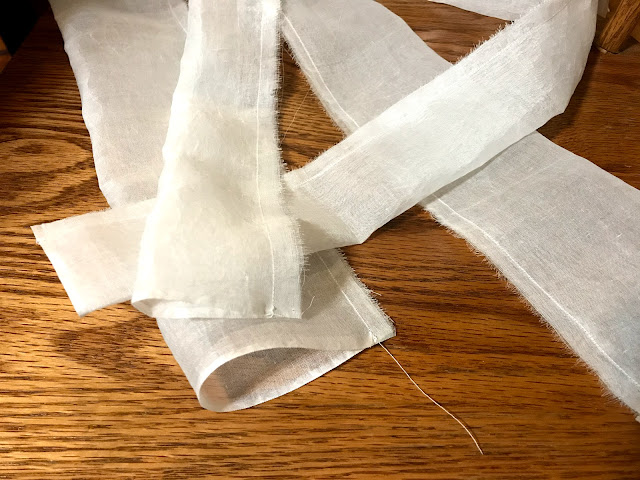 Finally, I cut the remaining mystery organza-ish fabric into strips, which I sewed into tubes to make puffed trim from. The tubes were turned right side out, and the following day, the day before the dinner, I proceeded to trim my little triangular cap. 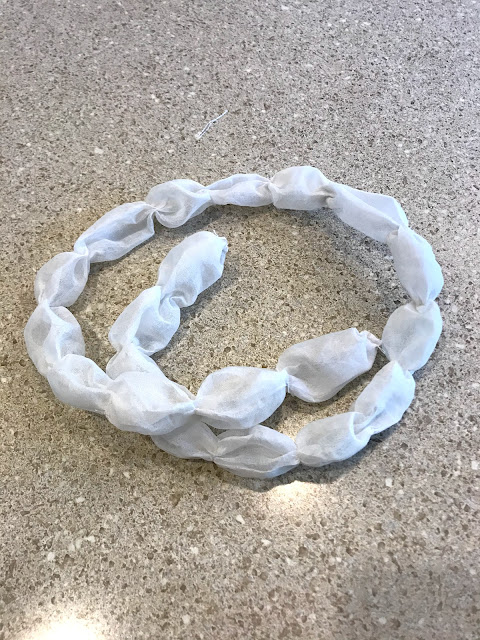 I gathered up the narrower strip of fabric into poofs about 1"-2" long. I then arranged this poofed trim around the edge of the triangle, covering up the line of machine stitching I used to attach the lace. 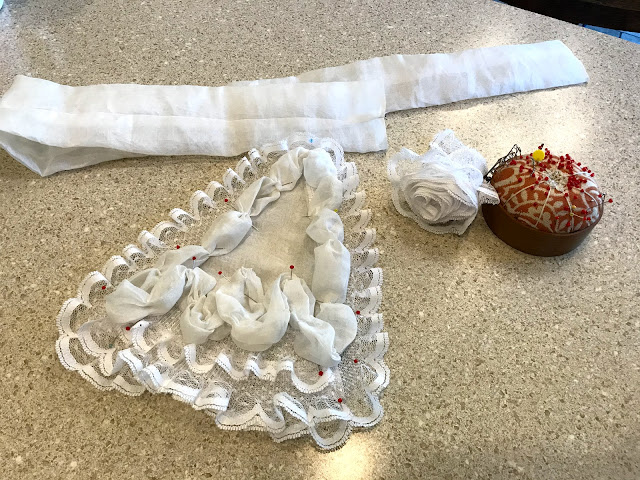 While I was at it I added a bit more lace to the back of the cap then tacked everything in place by hand. 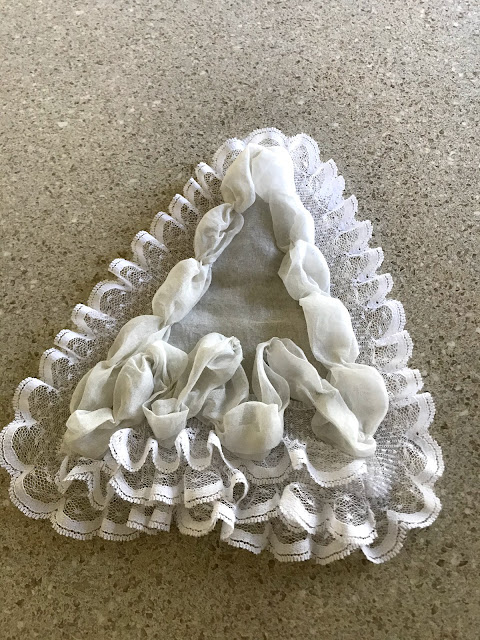 I considered calling the cap done like this, but then I decided it needed a pit more poof. So I took the second, thicker, tube of organza stuff, and gathered it up by sewing a long running stitch along the center seam, being careful to only sew through one layer of fabric so the tube was still a tube. 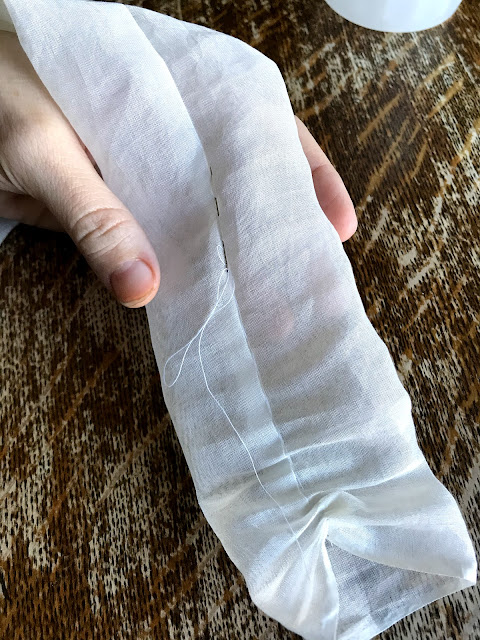 I gathered the tube up tightly until it looked like this: 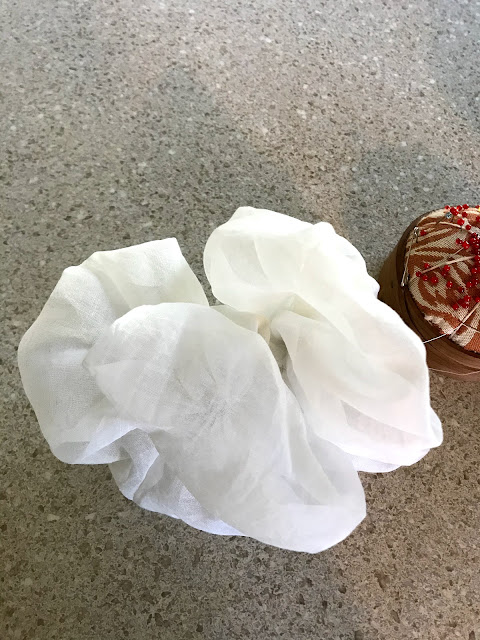 I stuck this poofiness in the empty space on the top of the cap, poking, and prodding, and squishing it until I was satisfied with the general random arrangement. 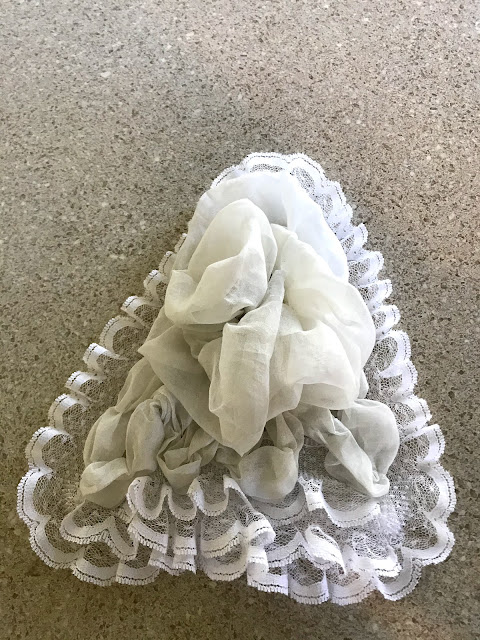 I tacked it in place with some large hand stitches and called it finished! My cap was ready to wear the following day! 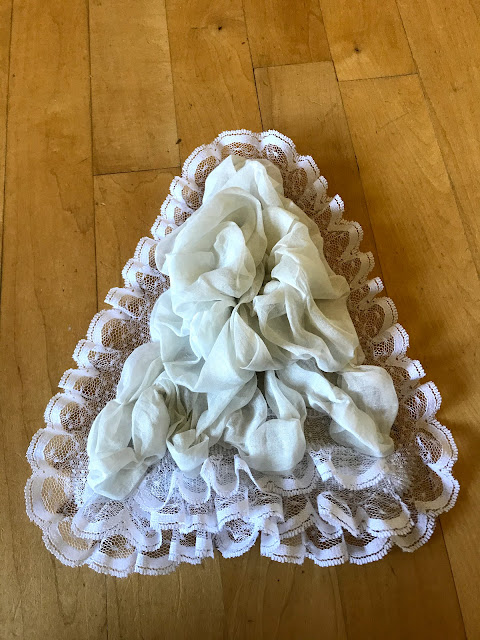 The morning of the dinner, I read through the hairstyle instructions in the American Duchess book, pulled out my hair styling tools, and got started. 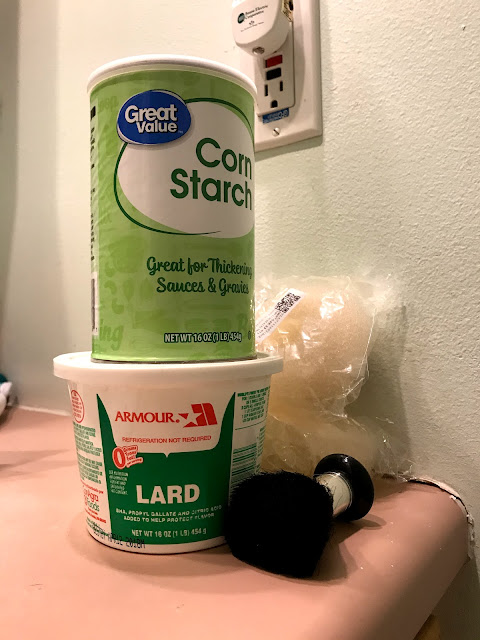 Lard, cornstarch, and hair donuts. That's how I was going to style my hair. The book heavily emphasizes the importance of pomade and hair powder in 18th century hair style, but I didn't have either of those things, or all the ingredients to make them. However, the pomade recipe in the book is primarily animal fat, and I did happen to have lard on hand, left over from making goat milk soap. So I decided lard was better than nothing and proceeded to grease up my hair with it. Once it was nice and greasy, I used a make-up brush to powder it with corn starch. (Yes, 18th century hair powder was primarily starch, so I used corn starch as that's what I had on hand.) It worked. 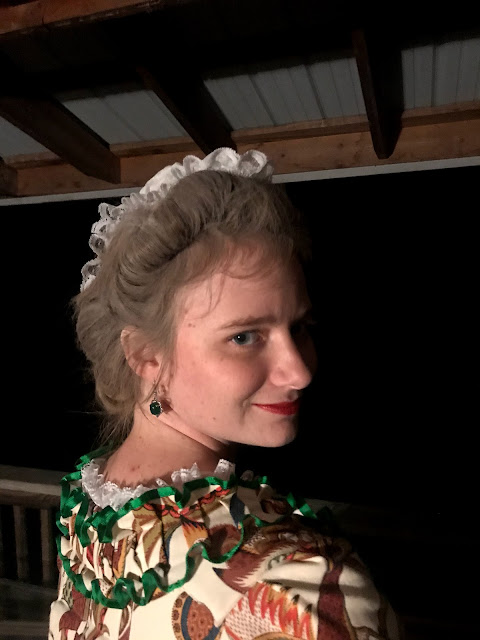 I cut up the hair donuts into sections, and rolled my hair up around the sections, approximately following the directions in the book. 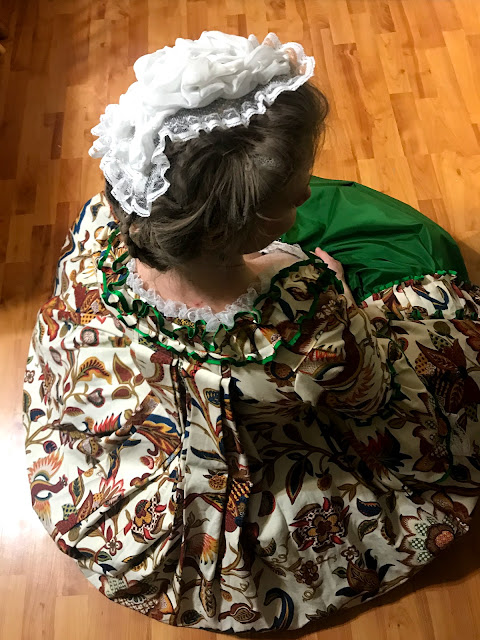 I pinned the rolls in place, then pinned more hair over top of them. I braided the back section of my hair and pinned the braids up as well. 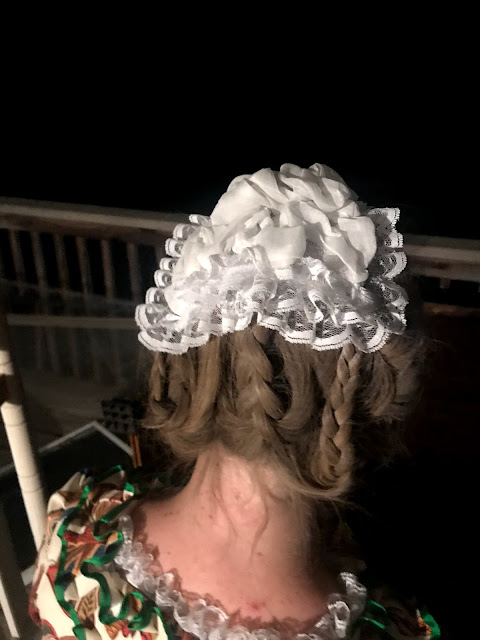 Then I pinned the triangular cap to the top of my head to hide the mess of pins, and my very first attempt at 18th century hair was done!

My hair was far from perfect, but it was done! And I'm pretty darned pleased with myself for actually attempting it. 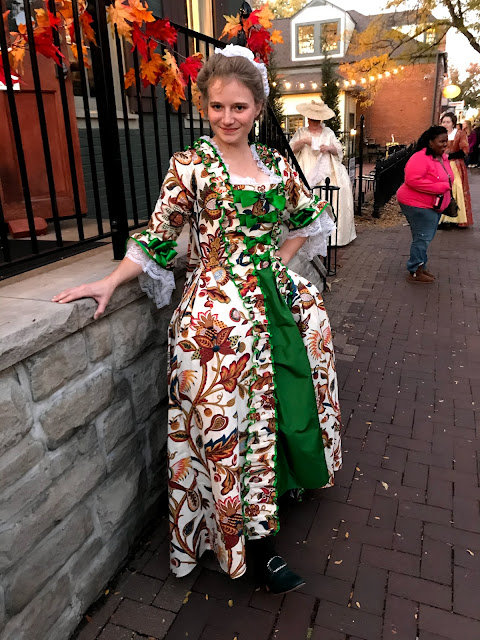 I had a lovely time at dinner, greatly enjoyed the company, and am eagerly looking forward to the events we will do together next year! And, now that I've done 18th century hair once, it's not quite so scary. 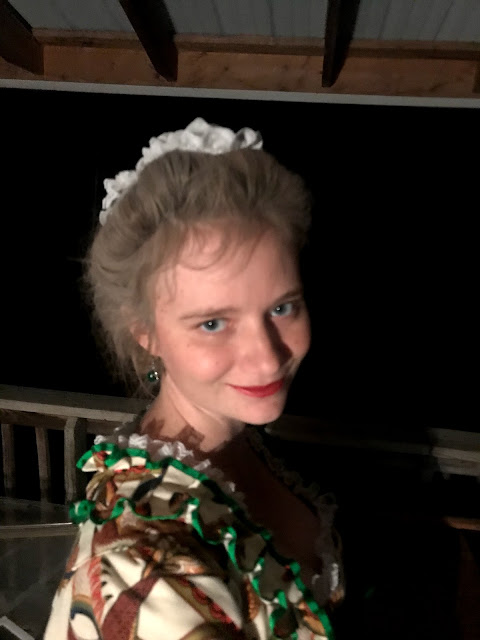 Oh, and just in case you were wondering, the lard and starch washed out of my hair just fine with my regular shampoo. Here I am the following morning, dressed and ready for church - no sign of lard left in my hair! 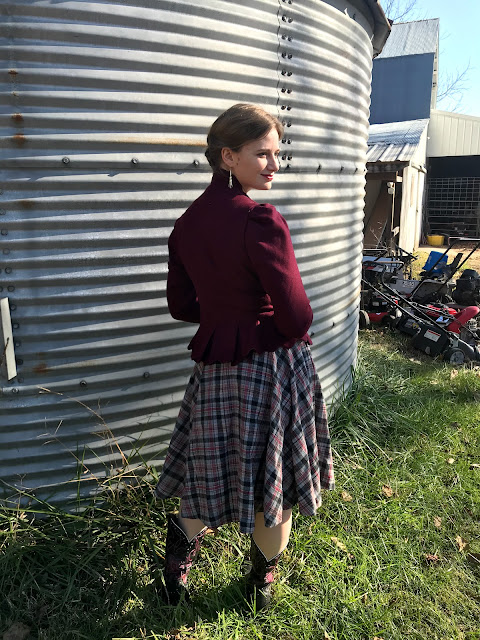