When the printed silk arrived in the mail last summer for my 1780's caraco, one of the first things I did was pull out all of my other silks and see if I had any sold colors which would pair nicely with it for a petticoat and trim. I was in luck! Earlier that spring, when Fabric Mart had all their silks on sale, I'd picked up 8 yards of sage green silk shantung for a very good price. This sage green shantung just happened to complement my floral printed silk perfectly! 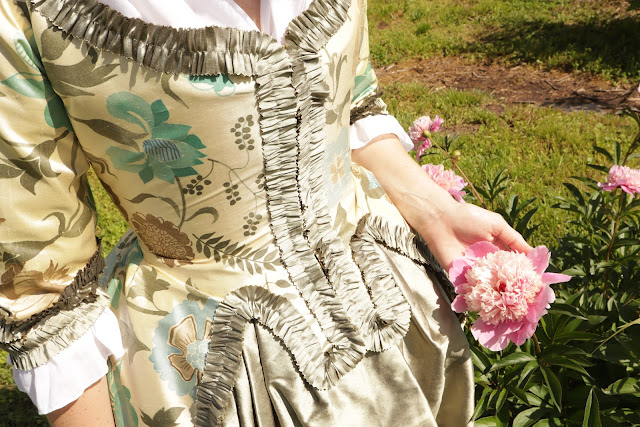 So, in March of this year, knowing I wanted to at some point get around to making the caraco, I started making a petticoat from this sage green silk. 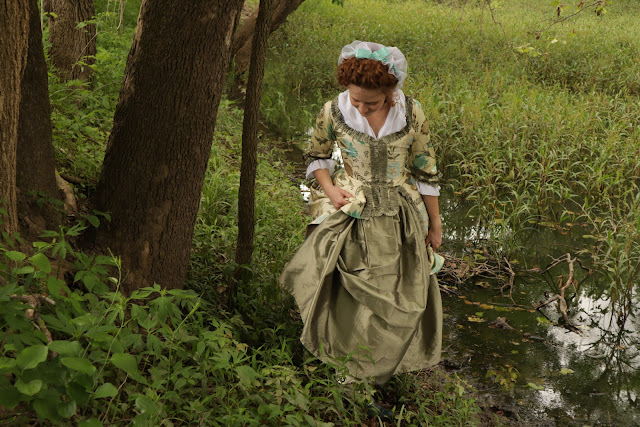 I find 18th century petticoats to be very comfortable relaxing things to sew. Nice hand sewing projects for when you want to hand sew *something*, but don't want to have to put a lot of thought into it. This is exactly the type of project I was wanting at some point in March, so out came the sage green silk. Two panels got cut, or rather, torn, from it, and I started hand sewing my petticoat. 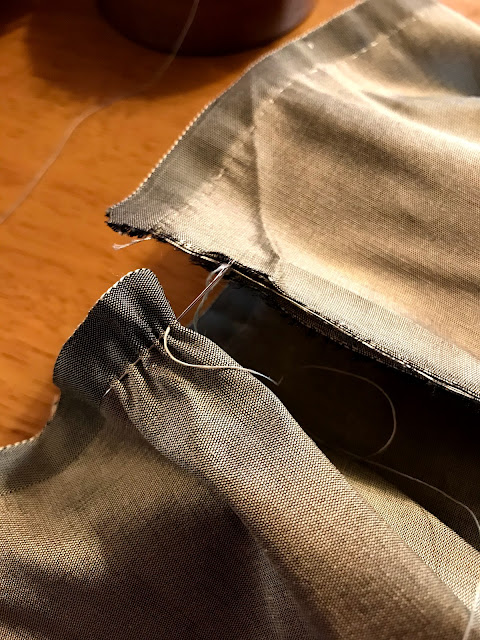 I was just going to use plain polyester thread to sew my petticoat, but when I tore my silk panels I wound up with some stray silk threads, shedded from along the tear. These green silk threads the fabric was woven from seemed quite sturdy and suitable for hand sewing. So I pulled a few more from along the torn edges, and proceeded to sew my petticoat with silk thread taken directly from my fabric. (The trim applied to my caraco later on was sewn with this harvested silk thread as well.) 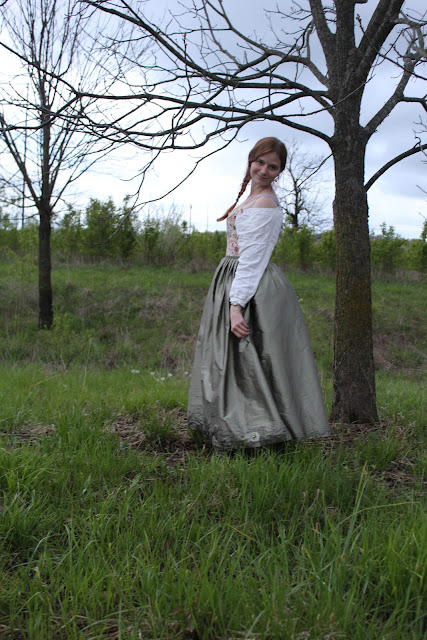 The side seams were sewn with a running back stitch. The pocket slits were hemmed. The bottom edge was hemmed. The upper edge was pleated to my waist measurement. And then construction came to a grinding halt. 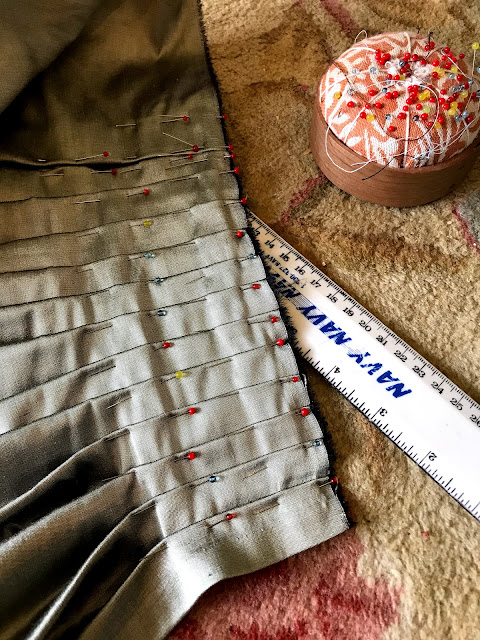 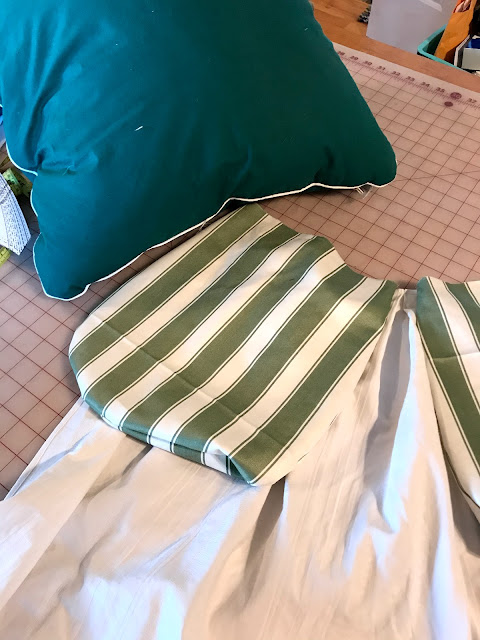 Thankfully, The American Duchess Guide to 18th Century Dressmaking includes instructions and a pattern for a 1780's split rump. So, one evening after work I pulled out the book, some heavy green and white striped polished cotton from my fabric stash, an old table cloth (also from my stash), and a feather pillow from a thrift store, and made myself a rump. 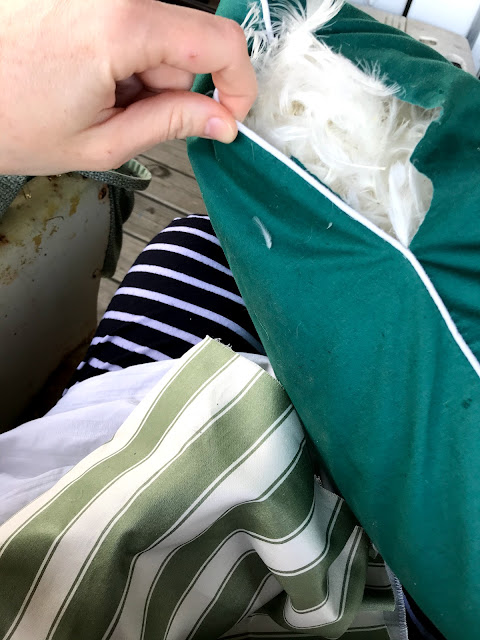 I made the pillow portions of my rump from the polished cotton and stuffed them with feathers from the pillow. 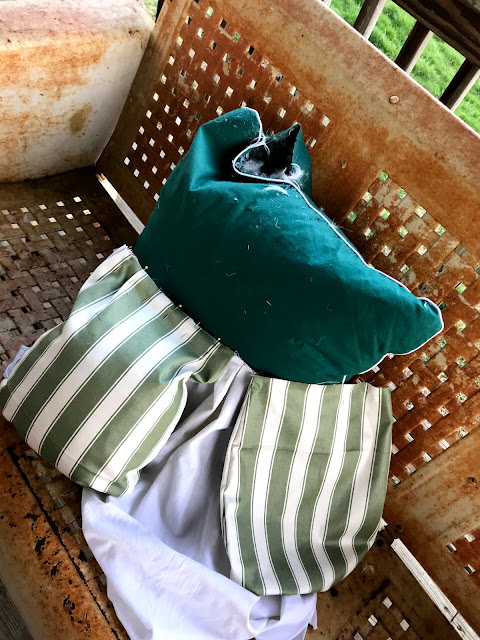 Stuffing things with feathers is messy! And trying to get both halves of the rump even was hard! Eventually, however, I was happy enough with it, and decided it was time to finish this thing off. 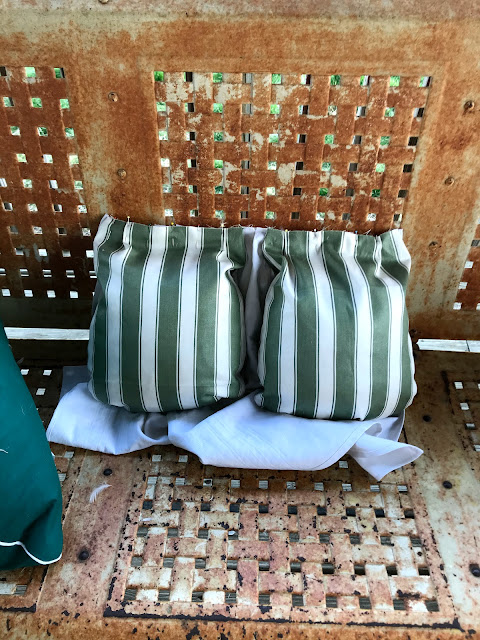 The half petticoat thing the two pillows of the rump are mounted to is made from a slightly bedraggled cotton table cloth, which used to be my grandma's. It was stained and had a couple of tears, but still a nice quality textile. I cut around the worst of the stains and still have fabric left over for a future project! 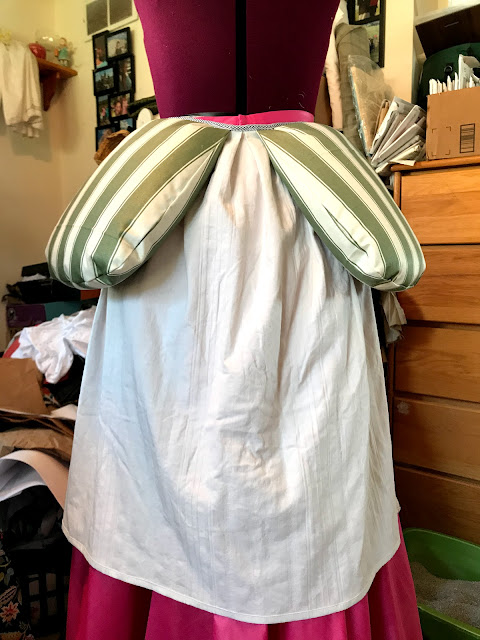 Once the pillows were stuffed, I bound the upper edge of this thing in cotton twill tape, used the same twill tape to make waist ties, and I had myself a split rump! 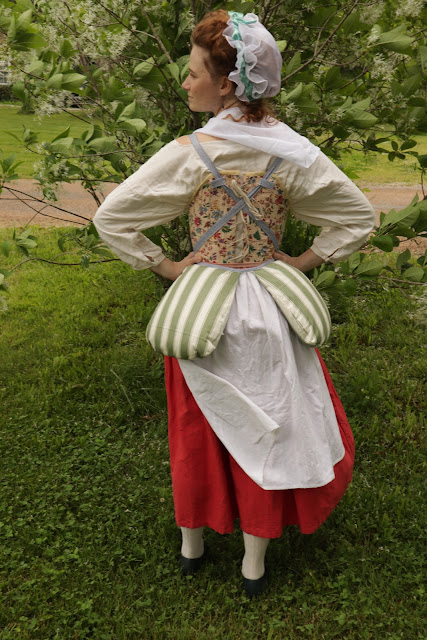 I completely machine sewed this thing, so it took less than two hours to make one evening! 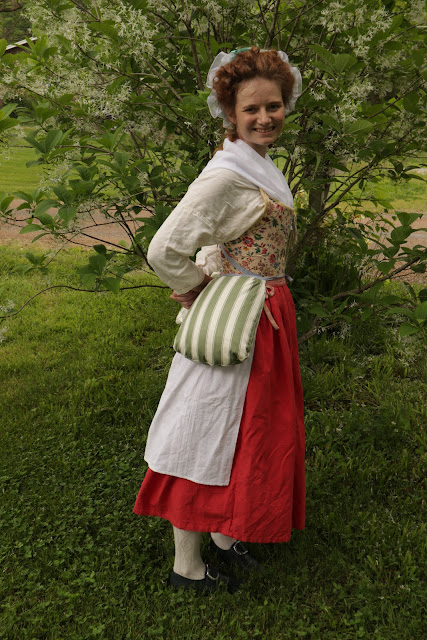 It's quite something to essentially have two pillows tied to my backside, but, with a petticoat over top, this split rump gives just the right shape for the 1780's! 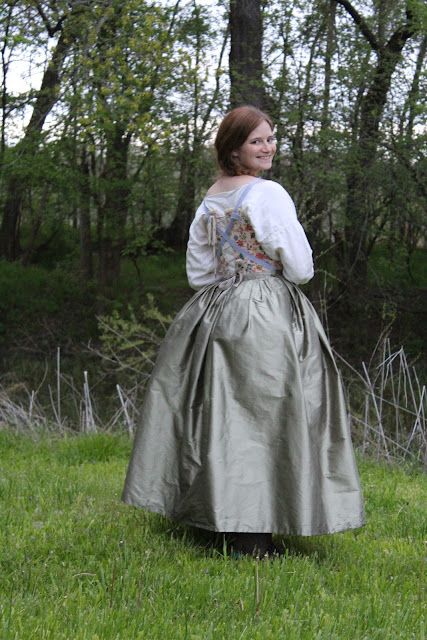 Once my split rump was done, it was back to hand sewing my green silk petticoat! Following the 1780's petticoat directions in the American Duchess book, my mom helped me level the petticoat hem one evening. 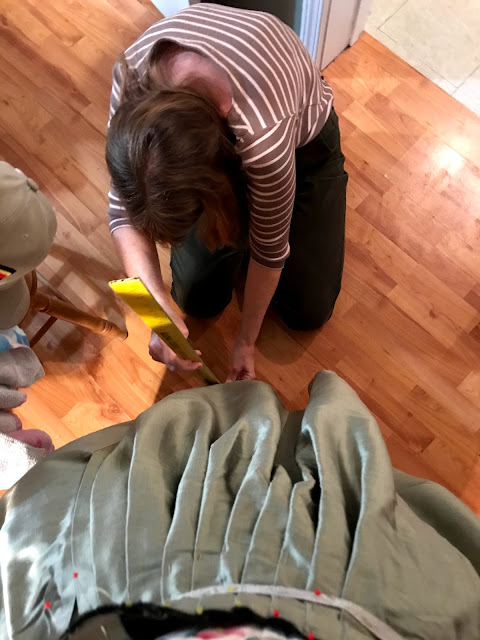 Once the hem was situated, I sewed on the linen waist tapes and my petticoat was done! 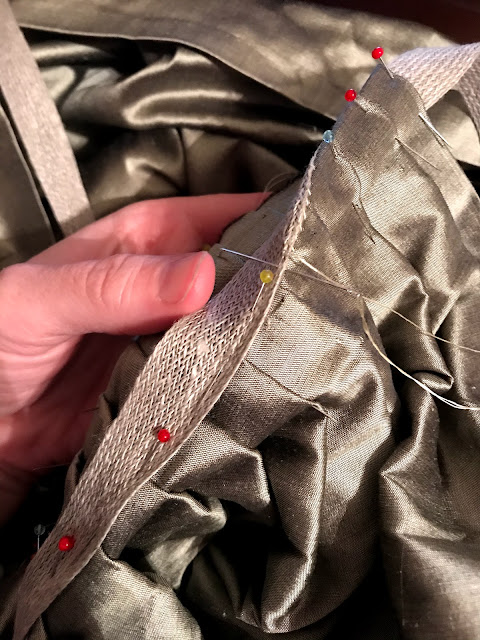 Once the petticoat was finished, I just couldn't wait to start the caraco! 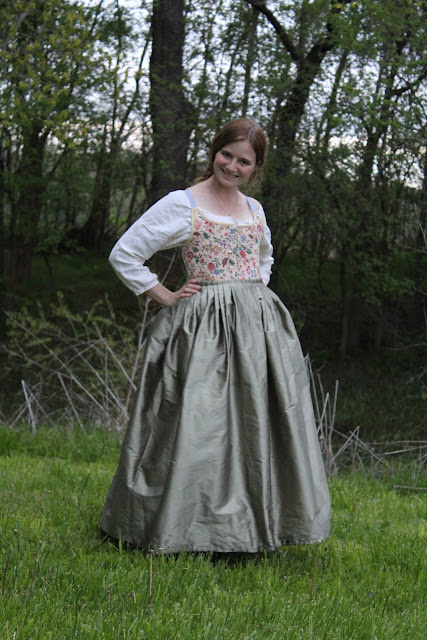 Petticoats are fun and all, but complete ensembles are better! 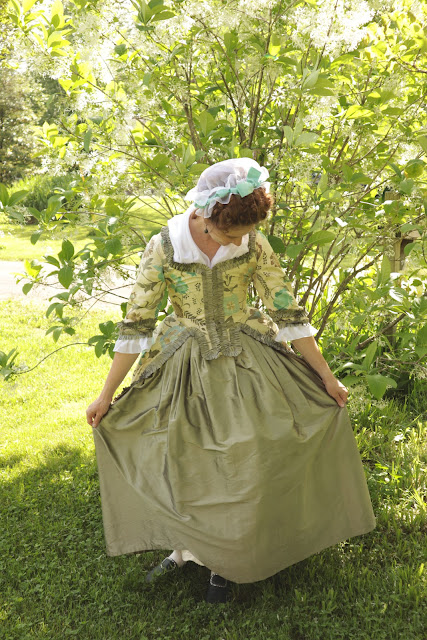 Being, well, green, this petticoat was my entry for the Historical Sew Monthly March challenge - Green!

What the item is: 1780's PetticoatHow it fits the challenge: It's green!Material: Silk ShantungPattern: None, just two rectangles sewn together. Hem leveled according to the instructions in the American Duchess book.Year: 1780's
Notions: Linen tape, silk thread.
How historically accurate is it? It's all hand sewn and the shape is right. The fiber content of the materials is correct. Shantung is a more modern type of silk, so that's not correct. However, it is a very smooth shantung, which could almost pass as a taffeta, so it's not too bad. The linen tape also does not have the correct weave for the era. So let's say about 85%.
Hours to complete: I don't know. Several hours, a little bit at a time between other projects. I didn't keep track at all.
First worn: Just for a walk with my family, 4/23/20
Total cost: The silk was on sale for $9.99 per yard, and I used just over 2 yards. The roll of linen tape was $2. The silk thread was just stray threads pulled from the silk when I tore it, so essentially free. In total, around $25. 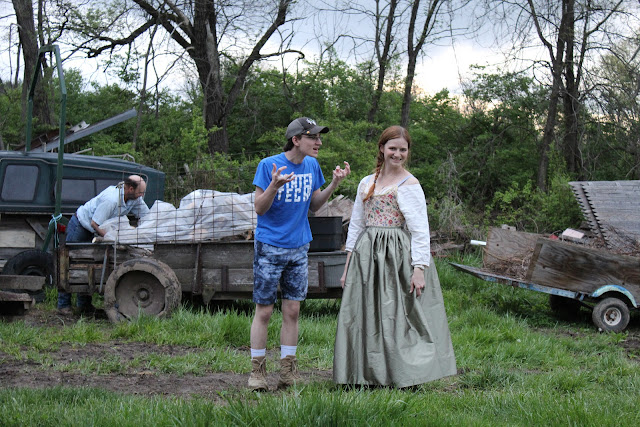