It actually snowed here on Monday, yet here I am, blogging about a summer dress. It's safe to say summer is well and truly over, but I like this dress too much to not get around to sharing it this year. And hey, if I throw on a jean jacket with this particular dress, it becomes rather fall appropriate. So perhaps I'm not too far out of season here? 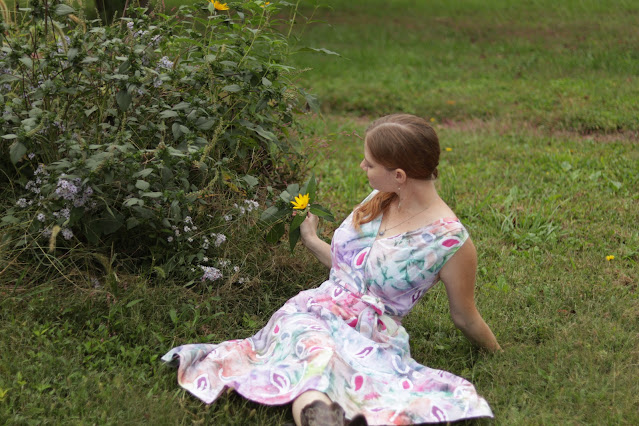 Anyway, it's no secret my very favorite sundress pattern is Simplicity 8085, a wrap dress which wraps across the back rather than the front. I fell in love with this design when I first made the pattern over 4 years ago, and since then I've kept my eyes open for other patterns which wrap across the back. 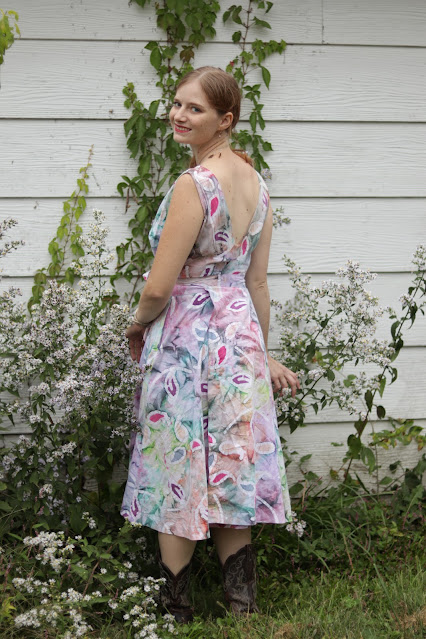 A couple years ago, Wearing History released just such a pattern - a 1939 sundress which wraps across the back to tie in the front, and has a fun cross-over front bodice as well! 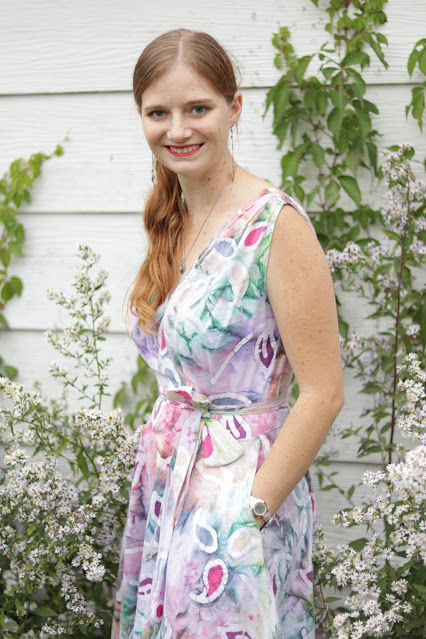 The pattern was first released about 2 years ago as a single size, 34" bust, digitized re-print of an original 1939 pattern. This bust measurement was a bit too small for me, but I loved the design, so I went ahead and bought the pattern anyway at some point in the next few months when Wearing History had a sale. 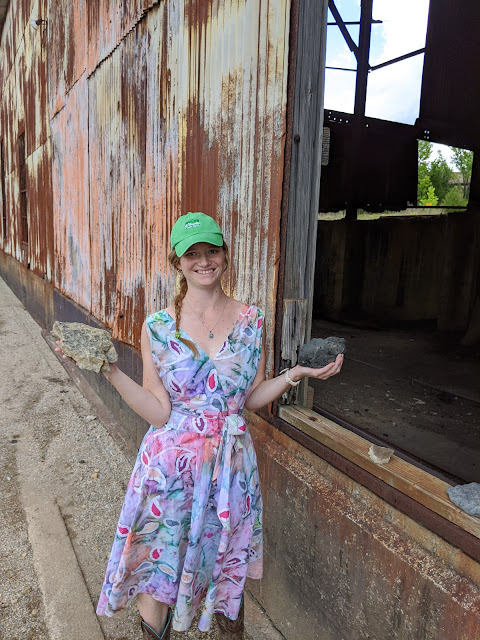 I printed out the pattern, meaning to make it right away, and that's as far as a got. For over a year, the pattern sat on my book shelf, printed out, ready to assemble and use 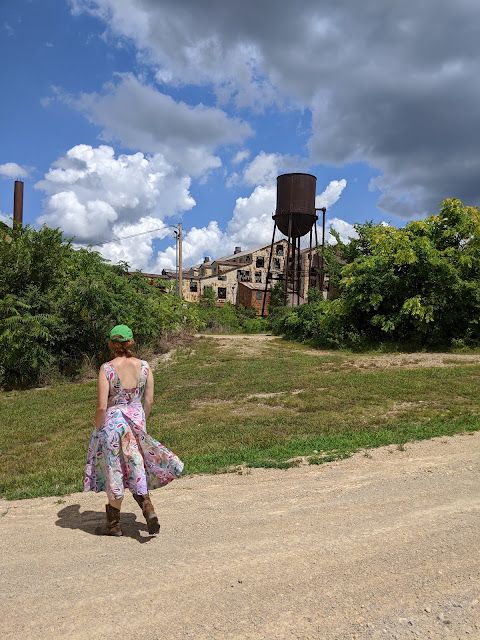 This summer, Wearing History re-released this fabulous sundress as a multi-sized, graded, pattern, making it a whole lot more user-friendly for the average sewist. Suddenly my Instagram feed was full of different versions of the dress as people excitedly tried out the new pattern. It was fun to see this pattern being made! That was just the kick I needed to pull out my already printed pattern and make this dress I'd been planning to make for over a year. 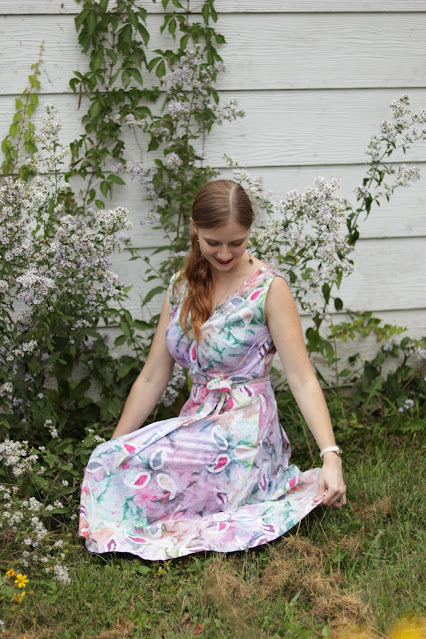 As I mentioned, I'd bought the single size, 34" bust version of this pattern when it first came out. According to the size chart, this pattern was the right size for me in the waist and hips, but a bit small in the bust. Since I already had this pattern printed out, I decided I would just alter this pattern to be the correct size by doing a full bust adjustment, rather than getting the new multi-sized pattern. 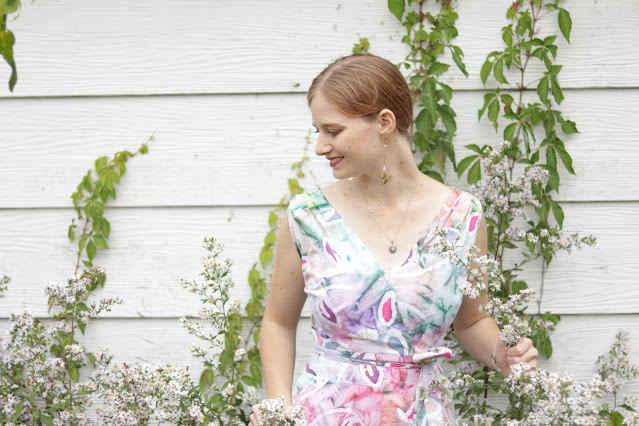 I picked out my fabric, a 3 yard cut of cotton batik, gifted to me by a friend of a friend who was de-stashing, and that is exactly what I did! 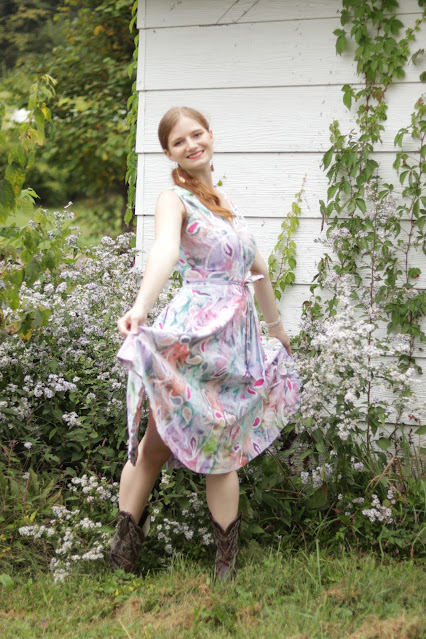 I adjusted the pattern, cut it out, and sewed it up. 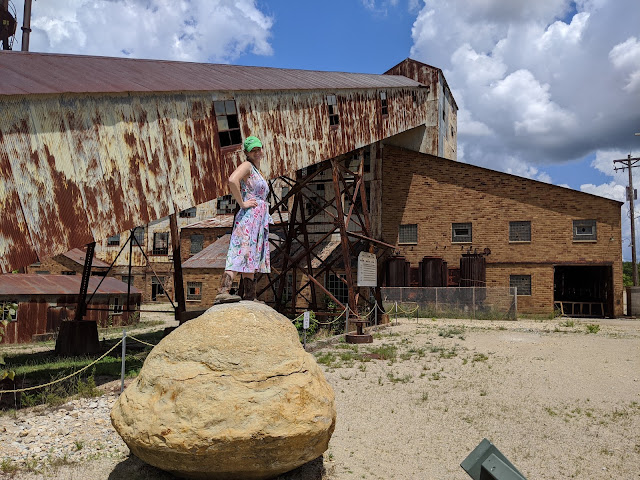 I wore it the weekend after I finished it to visit a historic mining site with my boyfriend. 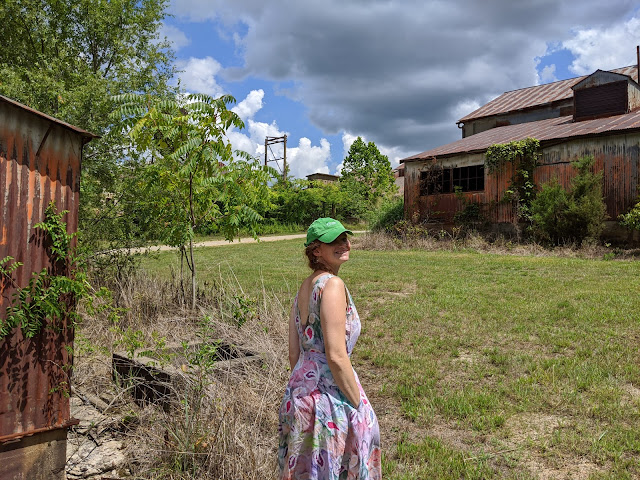 I was a little short on fabric, and didn't have enough to fully line the waist ties, oops. 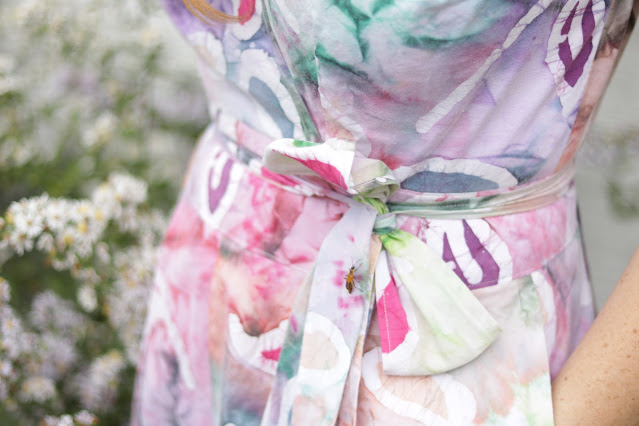 I figured out a way to still face the waistband on the inside of the dress, as I felt that was important to the structure of the garment, but the ties themselves just got a narrow hem along the edges. 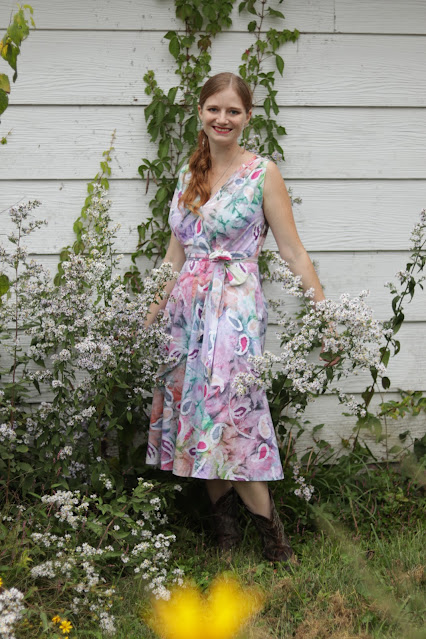 This worked, but it would be nice if the ties had a little bit more structure to them - so next time I made this dress hopefully I would have enough fabric to fully line the ties like I was supposed to do here. 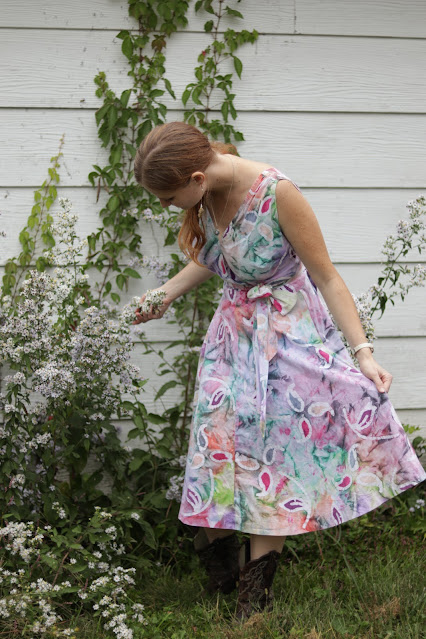 Speaking of next time. . . As I mentioned above, I did a full bust adjustment to account for the pattern supposedly being too small in the bust for me. The finished bodice is actually a little large on me, so next time I'm gonna un-do that full bust adjustment and just make this dress a straight size 34. It appears there's plenty of extra ease worked into this pattern so that should work out just fine. 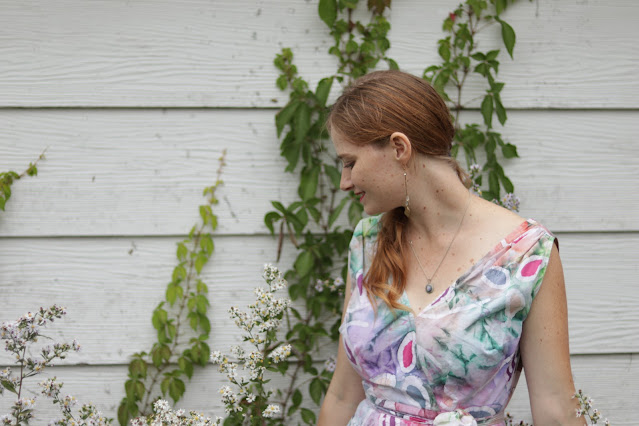 The cross-over bodice kept trying to fall open in the front. So on my first wearing of the dress, I added a quick tacking stitch to keep the two sides of the bodice properly overlapping in the front. 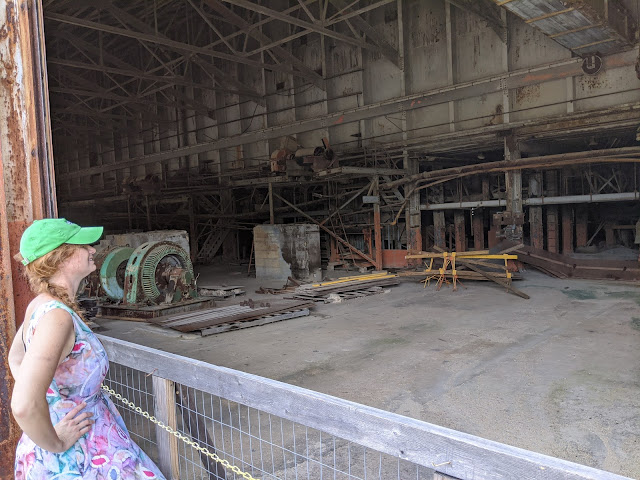 The bodice also felt a little too blousy at the sides. I fixed this sometime after the first wearing of the dress by removing the arm hole binding and doubling the depth of the side bust darts. 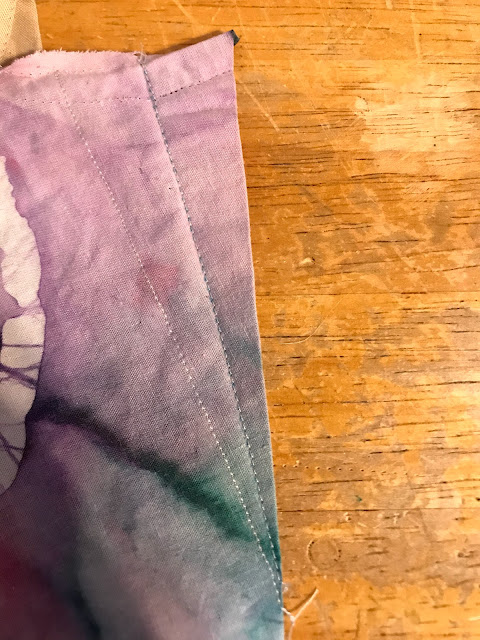 After sewing the binding back on and wearing the dress again, I was pleased to discover the fit had improved. 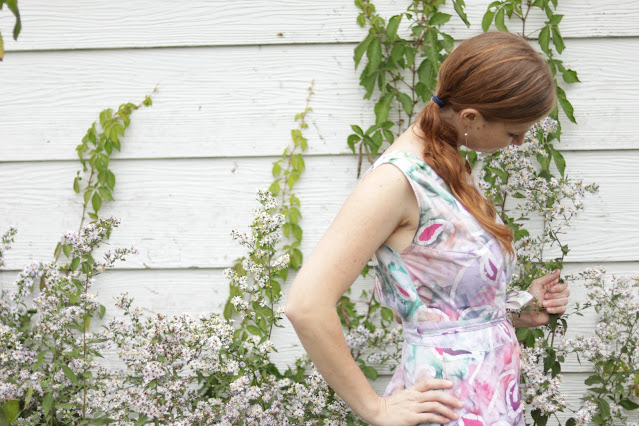 However, the bodice still just feels too big in the bust, so hopeful eliminating the FBA next time will fix the issue. 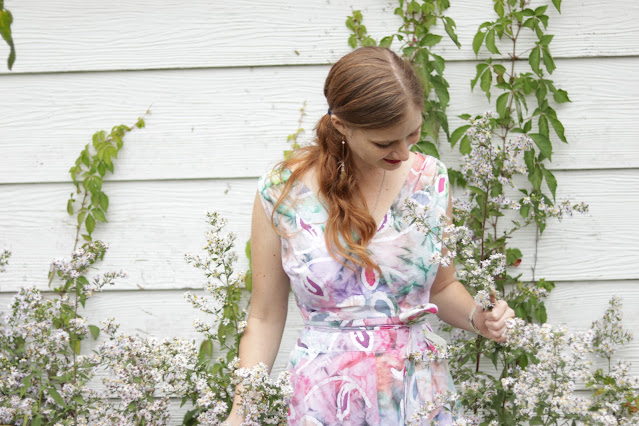 I know I could test out pattern adjust and double check fit by making a mock-up, but honestly? I just can't be bothered for an every day dress. 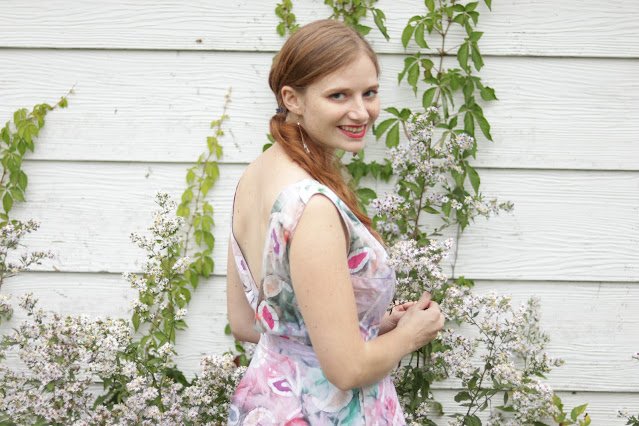 The other thing I'll be messing with next time I make this pattern is the back overlap. 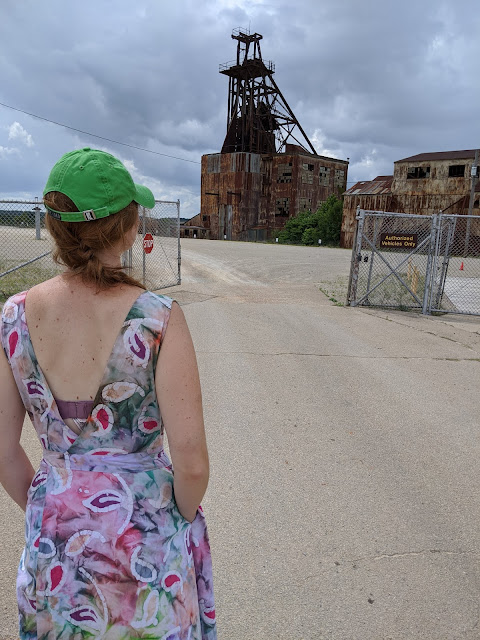 It's definitely on the low side, so I'll be figuring out how to raise that. 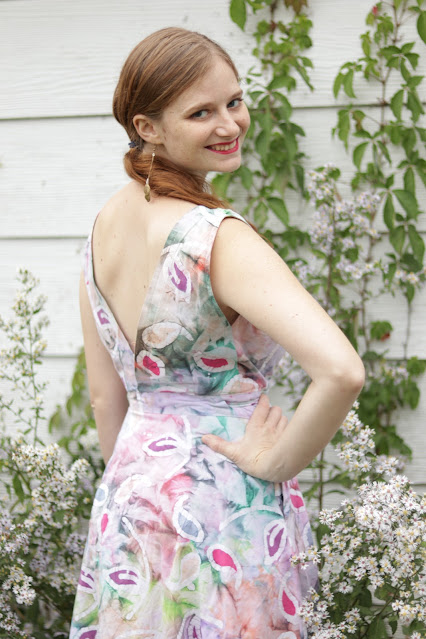 Hopefully my next version of this pattern happens a little quicker than this first version did! 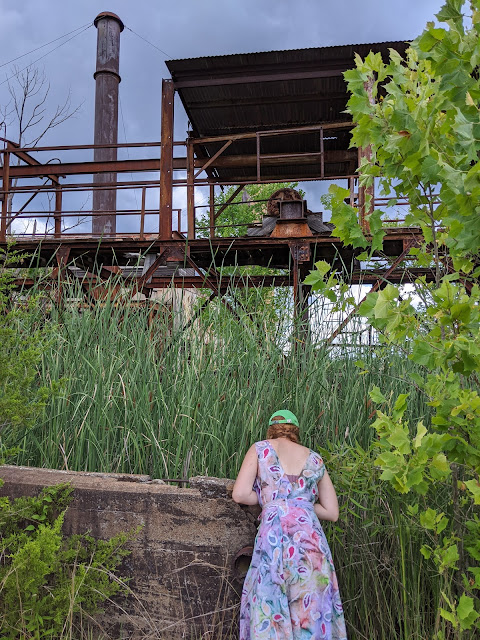 It's a pretty quick sew - there was no reason to put off making this dress for two years! 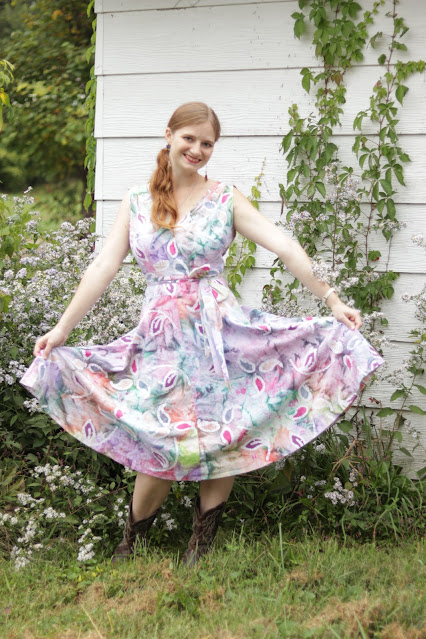 Despite the minor fit issues, I love this dress, and have worn it plenty since finishing it! 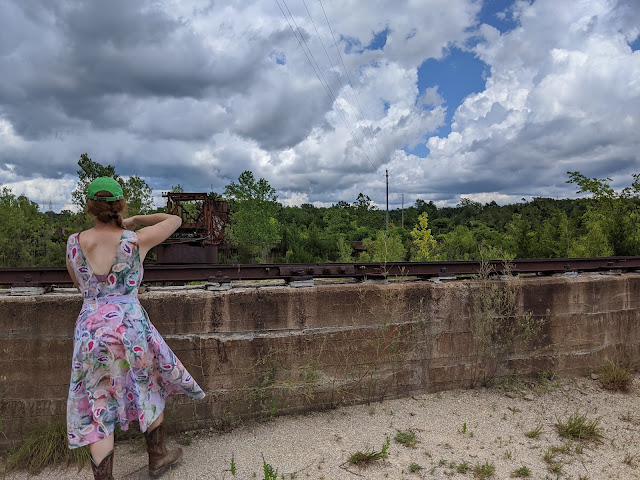 It's a fun, interesting, design, and easy to wear. 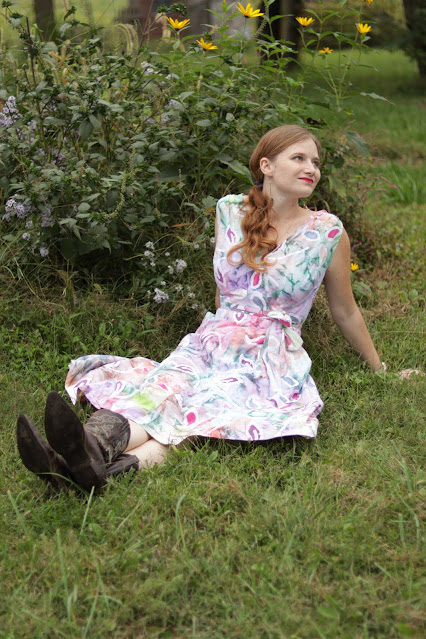 Just what a summer dress should be! 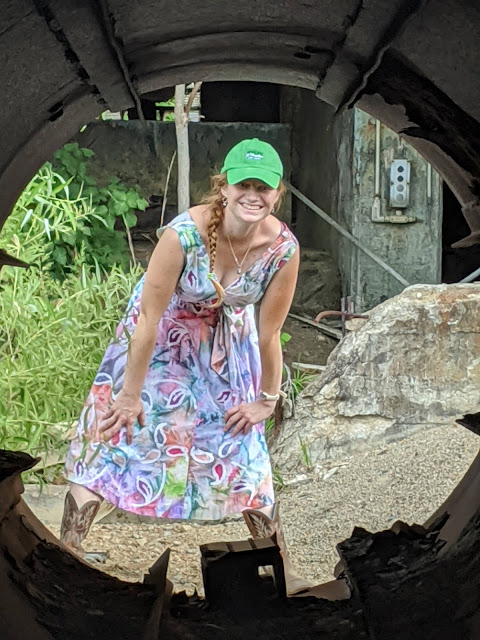 Posted by Alyssa at October 29, 2020
Email ThisBlogThis!Share to TwitterShare to FacebookShare to Pinterest
Labels: 1940's, 52 Week Challenge, Me, Sewing, Vintage