A Cwtch Cosy Hoodie with a Baby Goat Pocket 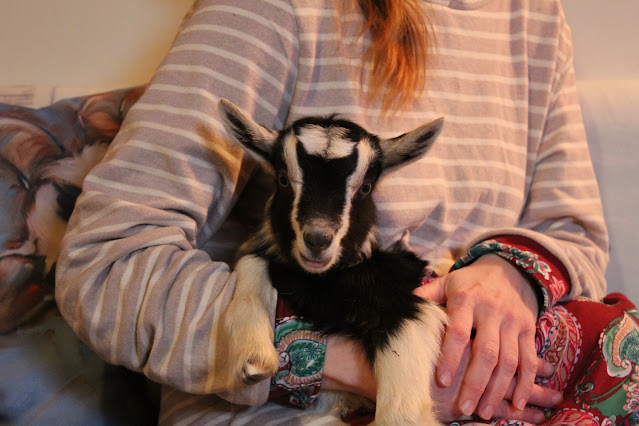 Goats being goats, my entire herd decided to kid in the past two weeks. Yes, the two coldest weeks of the year, with temps going down in the negatives and snow falling every other day. That was fun. . . 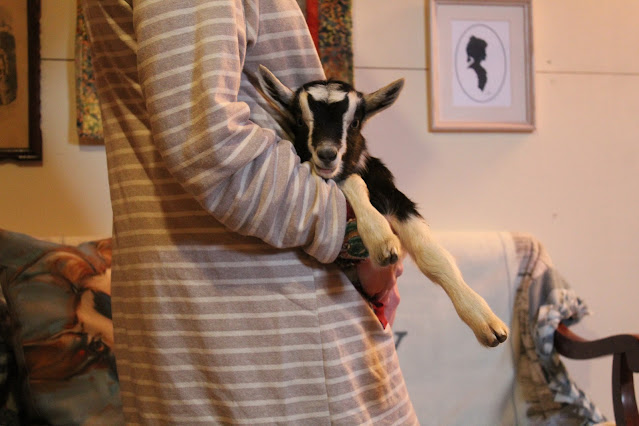 Every shed was full, and then more than full. Goats wound up in the garage. Babies came into the house. Heat lamps went up everywhere. Thank God we didn't loose power like Texas did, because even with heat lamps it was a struggle to keep the babies warm enough and there were a few sleepless nights. And, thank God for wood heat, so even if we had lost power the house would have still been warm enough for us people, and probably all the baby goats would have wound up in the house at one point or another. 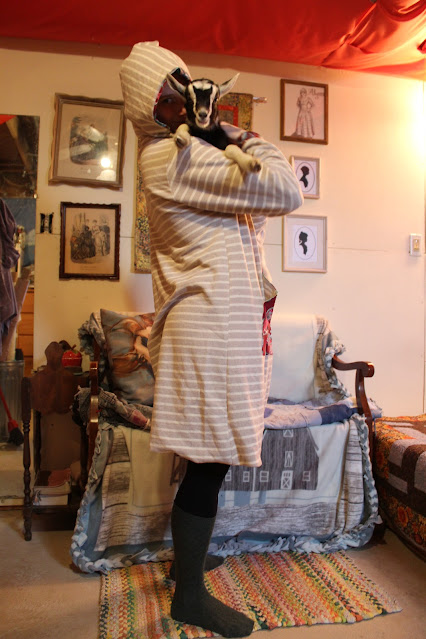 Speaking of cold. . . I may have been spoiled previously with my nice warm sewing room and bedroom on the main level of the house (fantastic wood heat, remember), but this summer, my sewing room and bedroom moved to the basement. The cooler temperatures of this level were fabulous and supremely comfortable all summer long. Then it got chilly. And my sewing room was a little less comfortable to spend all day in than it previously had been. The fleece pants that have been abandoned in my bottom dresser drawer since high school? Oh yeah, those started getting worn. All. The. Time. The fleece top my future mother-in-law gave me? Possibly my most used Christmas gift this year. Same goes for the fuzzy socks she gave me. 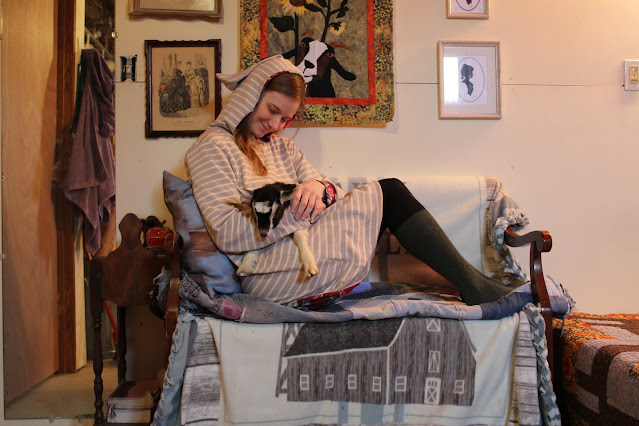 I used to never wear fleece - too warm and synthetic-y for me to be comfortable. This basement room changed that however. As the winter got colder, I decided I needed to make myself some warm loungewear to wear while sewing. The single pair of fleece pants and the fleece top did need to be washed once in a while at least. . .

Thus, when Mother Grimm asked for testers for a new lounge hoodie, I jumped on it! Cozy sewing clothes, here I came! 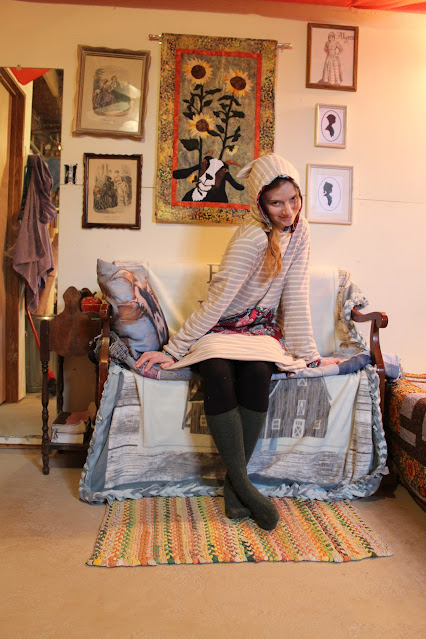 This is meant to be a over sized snuggly hoodie, which I made a little less over sized by sizing down when I found myself between sizes, rather than sizing up. It's still plenty loose and comfy, but fitted enough to be easy to work in. I find things that are too loose tend to get in my way while sewing. 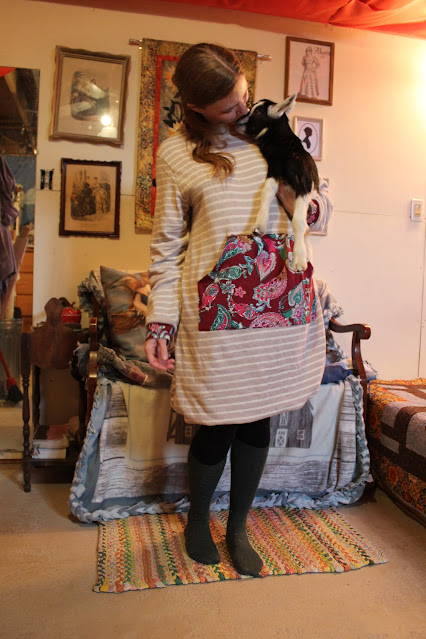 The hoodie is designed to be made from fleece or minky-type fabrics. As I mentioned earlier, fleece isn't a fabric I particularly enjoy wearing, so it's not a fabric I really have in my stash. Thus, my hoodie would be made from something other than fleece! 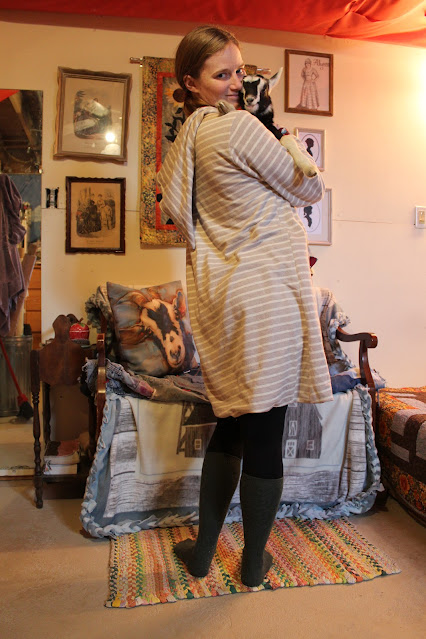 You know what fabric I do enjoy wearing? French terry. Of the cotton variety, preferably, not the synthetic. It's pretty soft and snuggly, and much less sweaty than synthetic stuff. As I appreciate this fabric, it's one I have collected whenever I've come across it at a decent price. For my hoodie, I decided to use an oatmeal and white striped French terry, acquired cheaply at Wal-Mart at some point in the past couple years. I didn't have quite as much fabric as I needed for this pattern, but with careful cutting and the addition of a center front seam on the hood, I made it work. 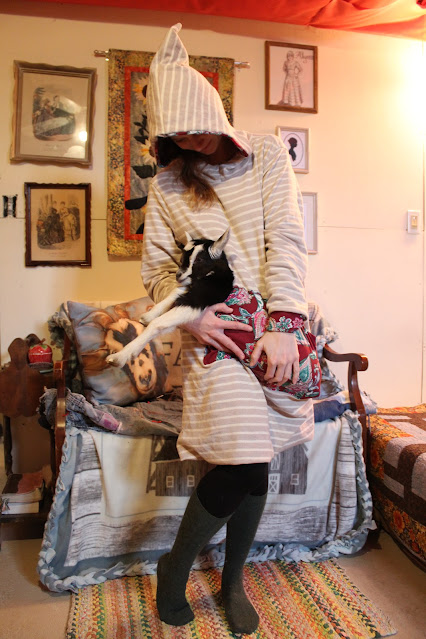 Now, as much as I like French terry, it's not quite as snuggly and insulating as the dreaded fleece I have recently become accustomed to. So, I decided to fully line my hoodie with some magnificent paisley double-brushed polyester, left over from this top I made a few months ago. I used the same material for the pocket and the sleeve cuffs. 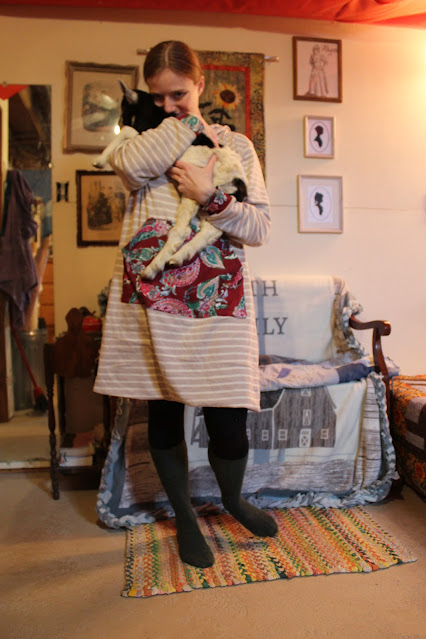 Double-brushed polyester jersey is pretty much "fleece light". Soft, very synthetic, and quite insulating. It's not quite as sweaty as fleece, as it is lighter weight, but it's a fabric I will only wear in the cold months. I don't hate it the way I hate fleece, but I don't love it either. That said, it is incredibly, amazingly, wonderfully, soft. Thus, I was lured into buying several pieces of it before I realized it's fleecy properties. So, not my favorite fabric, but it did work wonderfully to make my hoodie a little more insulating and snuggly - basement sewing room appropriate in other words.
The pattern gives instructions on how to fully line your hoodie if you would like to do so - very convenient. 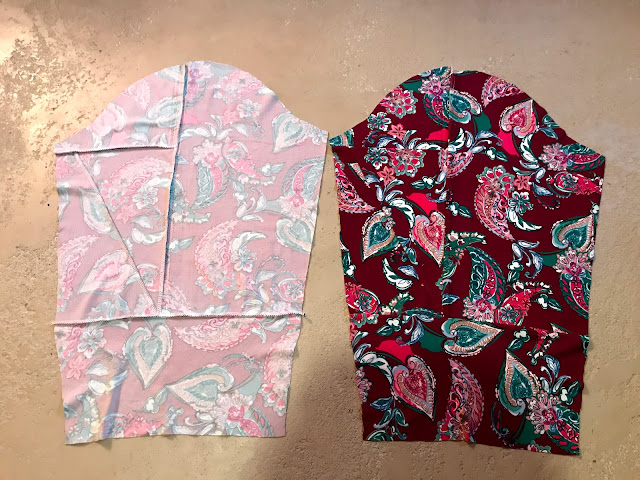 As with the outer French terry layer, I didn't have quite as much fabric as I should have for the lining. So, I pieces the sleeves together within an inch of their life. Not in the most orthodox sewing practice (In modern sewing at least. Piecing was more common historically.), but I like getting as much mileage as I possibly can from my fabric and I am very pleased than I managed to use up this piece completely and entirely! 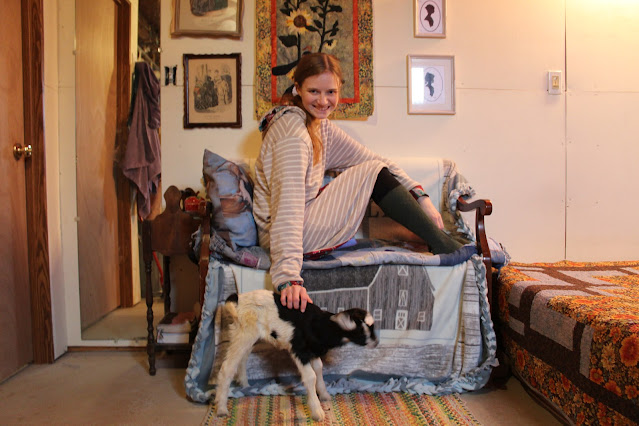 Once all the piecing was done, I sewed up the hoodie in one morning, tried it on, and was very pleased to find it just as snuggly as I'd hoped it would be! 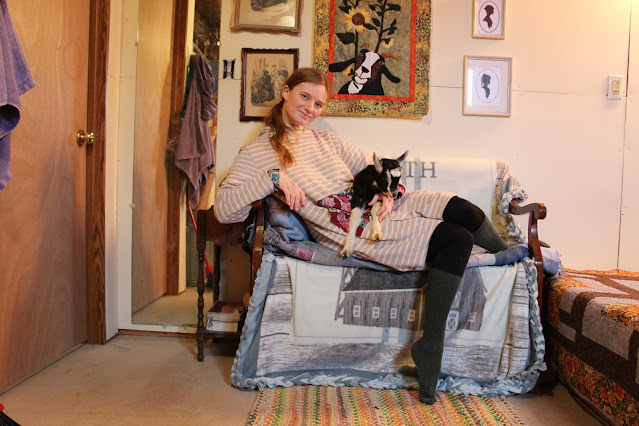 Perfect for staying cozy while sewing in the basement! 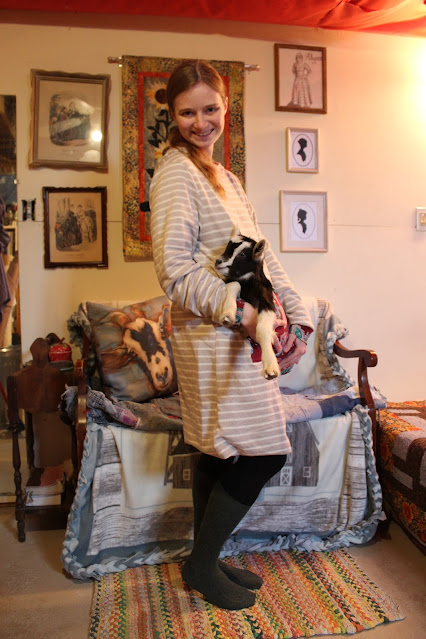 As an added bonus, when baby goats started arriving a few days later, I discovered the pocket was big enough to hold a new born baby goat! 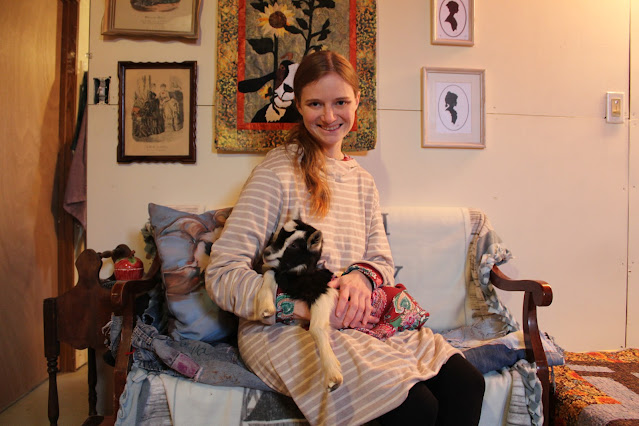 Who wouldn't want a hoodie with a goat pocket?!?!? 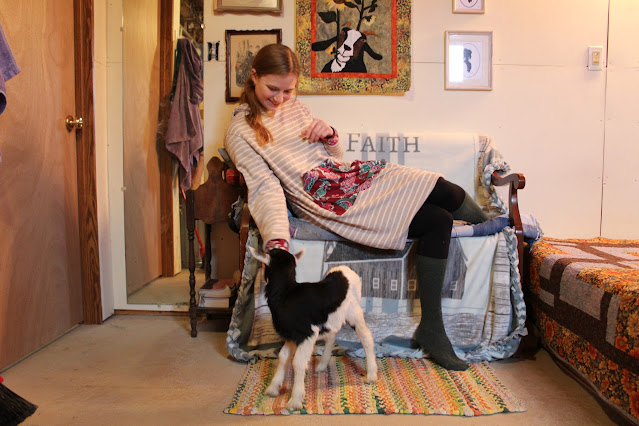 This little lady is Odette, one of Giselle's triplets. She mostly stays with her mama and siblings, just comes inside to be snuggled every now and then. 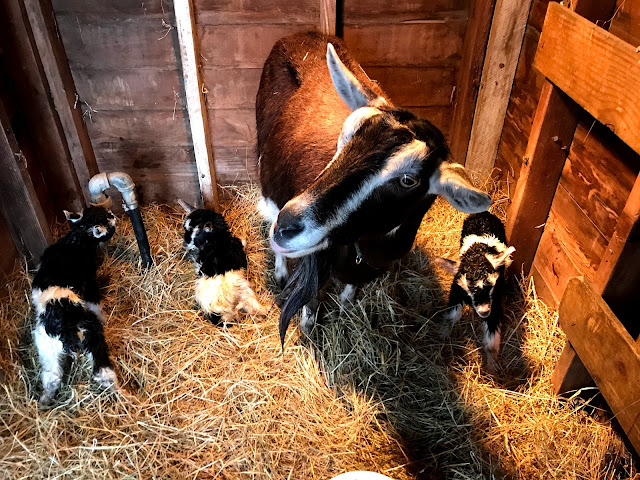 I'm happy to report that after a couple cold and worrisome weeks, it has warmed up, the sun is out, and Odette along with her siblings and all the other babies are now doing very well and enjoying playing and exploring outside! 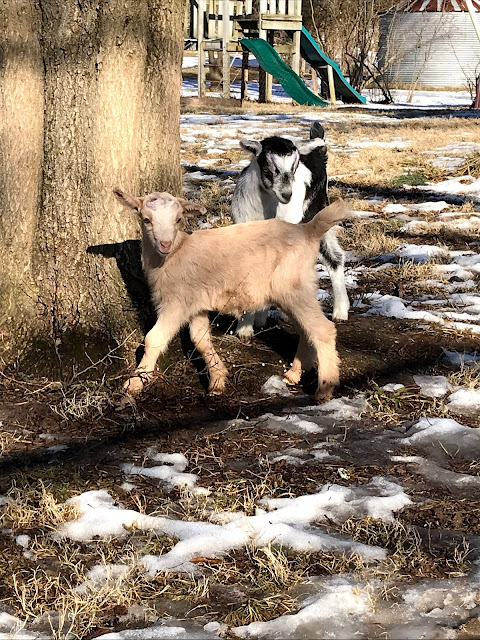 The basement however, is still a little chillier than I would prefer sometimes, so my new hoodie is seeing lots of wear! 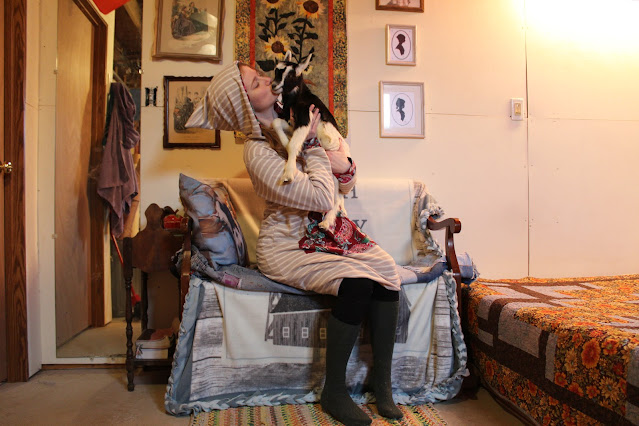 If you're interested in making cozy lounge hoodie for yourself, the pattern is available in both children's and adult sizes on the Mother Grimm website. Use the code Cwtch50 to get the pattern 50% off!
Posted by Alyssa at February 22, 2021
Email ThisBlogThis!Share to TwitterShare to FacebookShare to Pinterest
Labels: Goats, Kidding 2021, Me, Pattern Testing, Sewing