A Rag Doll and Matching Dresses

A few months before my niece's first birthday I decided I was going to make her a rag doll. She loved stuffed her animals so I figured a rag doll would be perfect! Fun and cuddly, a bit different than anything she already had - and something I could make! 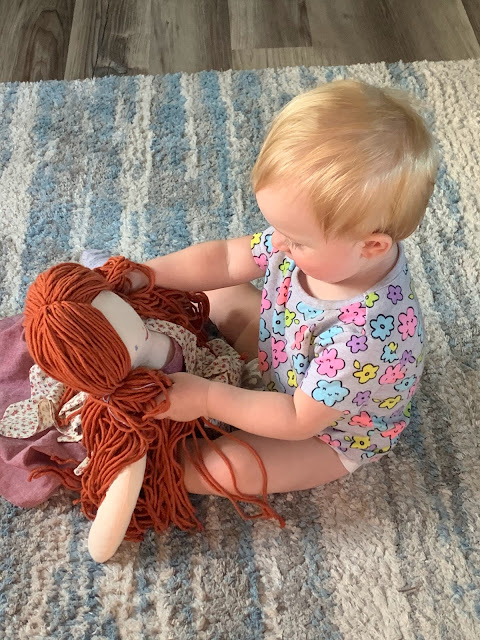 I had a specific idea in mind. I wanted the doll to be fairly large - about the size of an American Girl doll and I wanted it to have long yarn hair that could be played with but wouldn't be easily messed up. I really didn't want felt hair or some other sort of permanently styled hair. I wanted this doll to be something my niece would find cuddly and fun at age 1, but not outgrow in a hurry. A doll she might still enjoy at age 5 or 6. 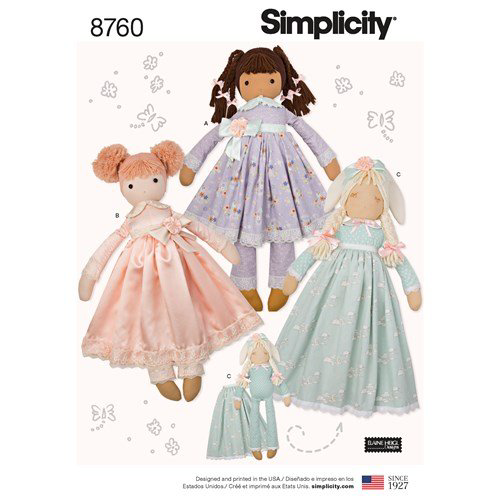 After considering multiple different patterns I picked Simplicity 8760 for the task. The doll had the general size and shape I was going for, but I would certainly be making a few changes. Clearly I would be doing the hair differently. I also planned to add a smile, because who wants a doll without a mouth? And I would not be permanently attaching the clothes to the doll - what fun is that?? The doll's entire body would be made from peach colored cotton and her clothes would be made separately. 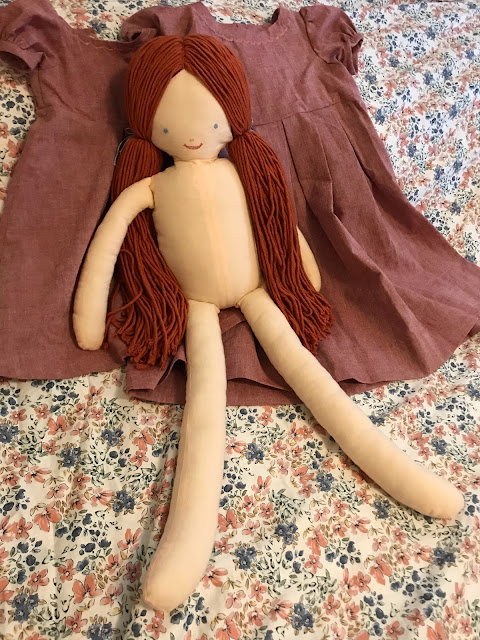 A pale peach cotton for the body of the doll was surprisingly hard to find. Joann's and Walmart had nothing, nothing, even close to the right color to match my niece's skin tone. When I had just about given up, and was considering attempting dye white fabric, I was relieved to discover Hobby Lobby had just the right color.  I quickly bought the 1/2 yard I needed and began the doll. 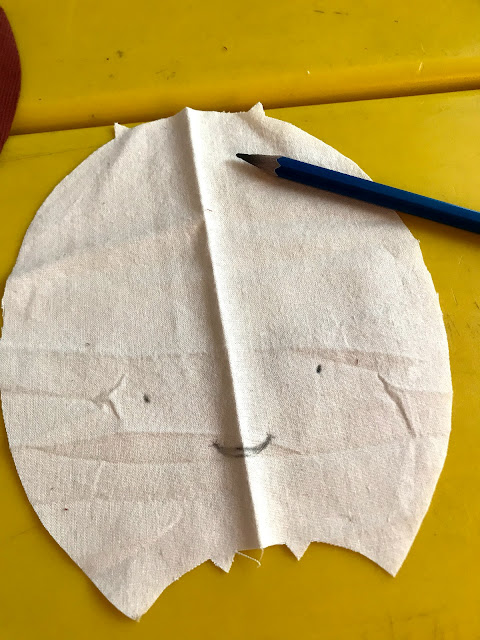 I used the template included with the pattern to mark the placement of the eyes, then freehand drew on a mouth as well. While embroidering the eyes and mouth I also decided to add a nose. 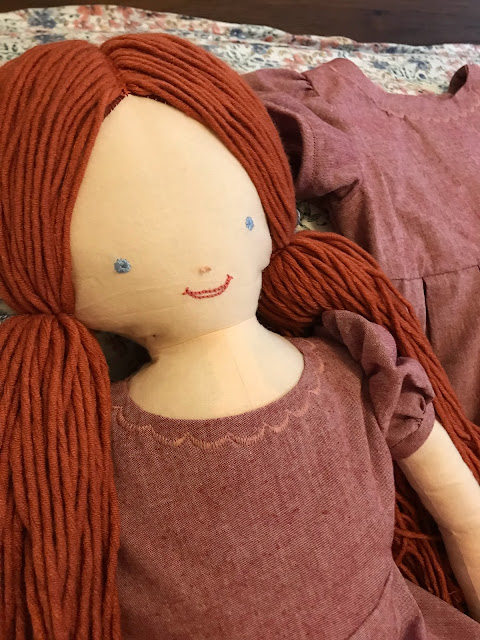 After looking at and feeling all the yarn at Joann's and Hobby Lobby I picked out this "clay" colored "comfy classic" yarn for the hair. It had a different texture than most yarn and I thought it would lend itself well to the cause of ragdoll hair. 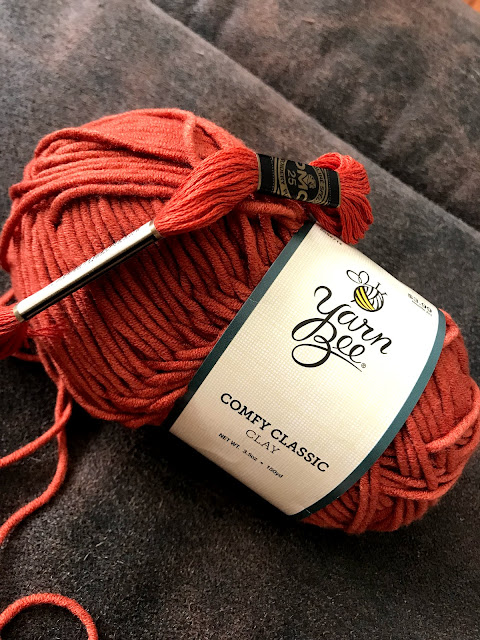 I used the felt "hair" pattern pieces from the pattern and cut them out of a soft corduroy that matched the color of the hair yarn. 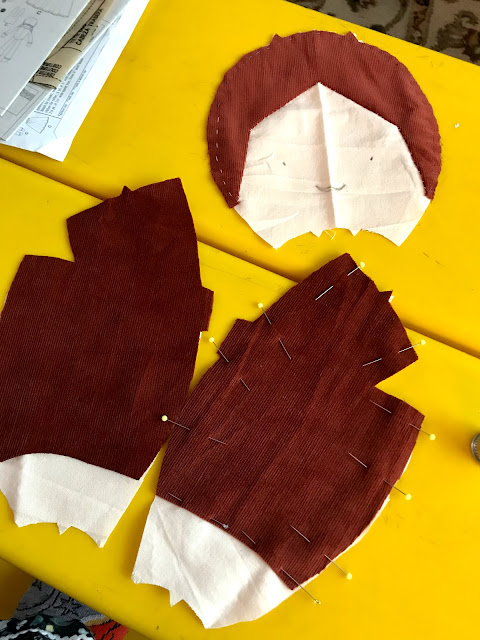 The corduroy was stitched onto all the head pieces prior to the assembly of the doll to form a base for the hair. 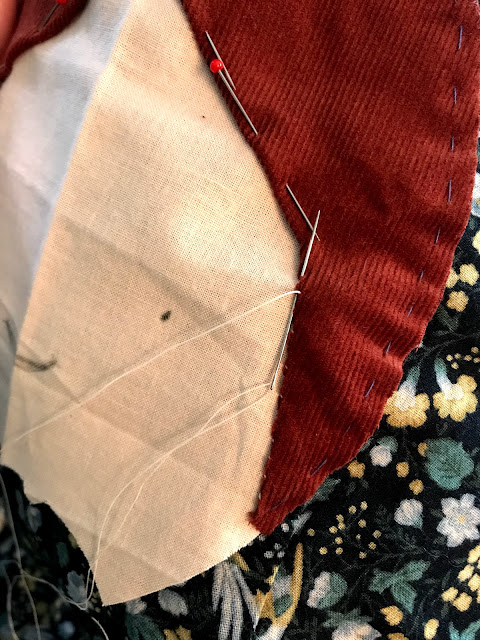 The doll was then sewn up, stuffed, and prepared for hair. 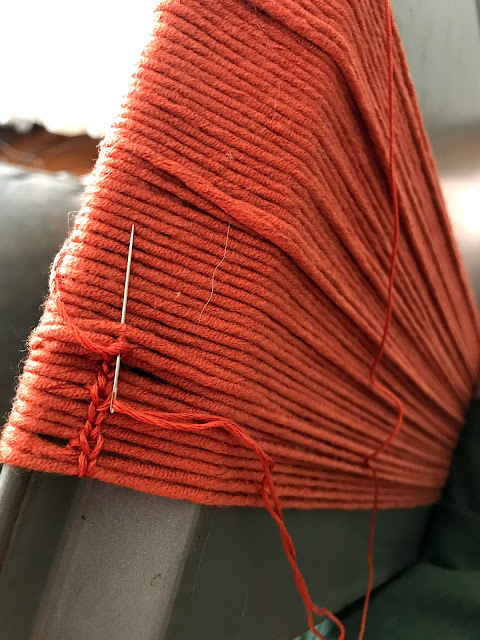 I used this tutorial to make and attach the doll hair. 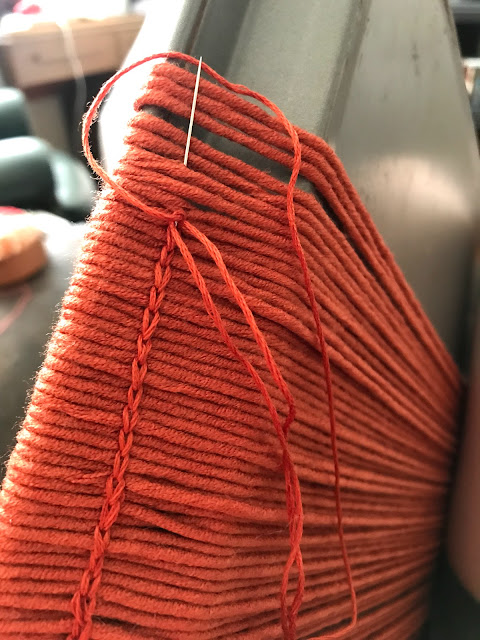 The only change I made was to sub a chain stitch, done by hand, for the center "part", rather than the machine done zig-zag stitch the tutorial recommended. I just thought it would look nicer. 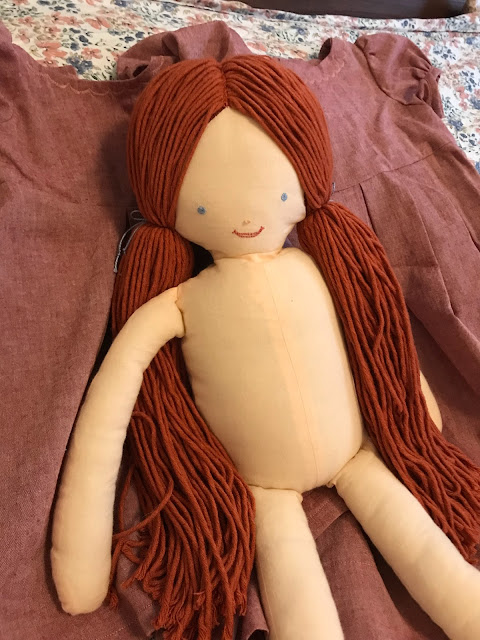 Hair made and attached, I styled it into pigtails, and this doll was ready for clothes! 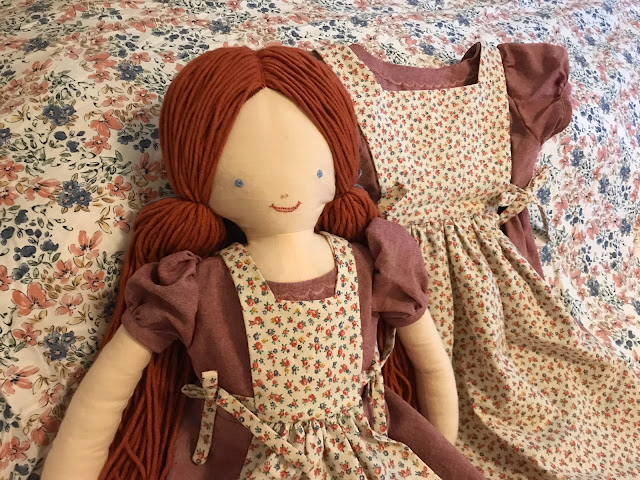 Along with the doll, I was also giving my niece the board book Goodnight Mr. Darcy, (Let's get her started on Jane Austen young!) so I decided a Regency-esque dress was an order. And clearly my niece would need a dress to match her doll. 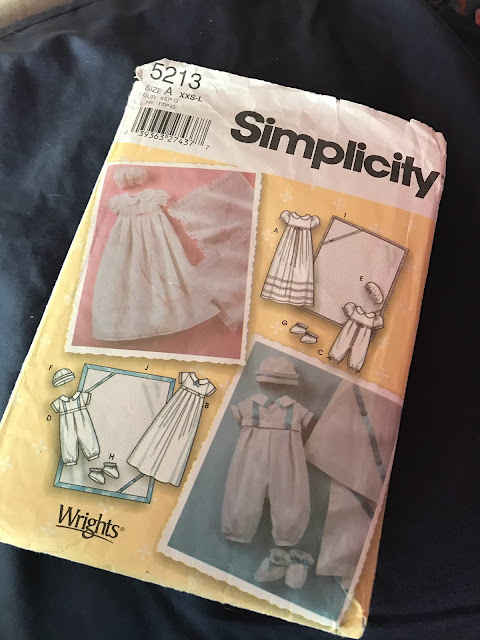 After going through my pattern stash, looking at the options I had in my niece's size, I decided Simplicity 5213, with it's empire waist, long pleated skirt, and short puffed sleeves, would fit the bill well enough. I could easily alter (and slightly enlarge) one of my 18" doll dress patterns to make the rag doll's dress. 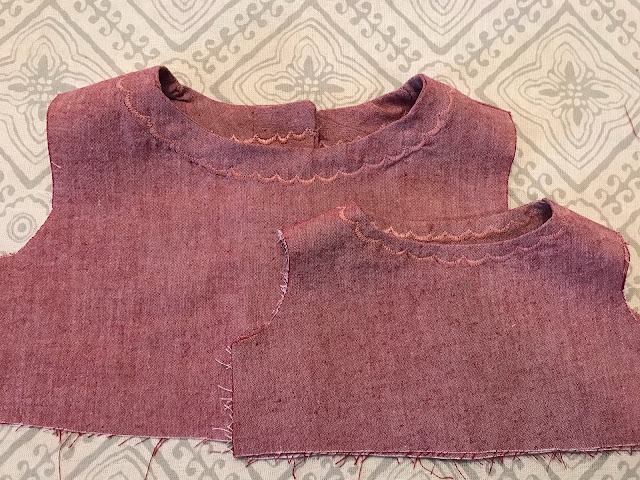 I cut the dresses out of the red cambric sheet, left over from this dress. Just for fun, I decided to use one of the fancy, little used, stitches on my sewing machine to "trim" around the neckline. 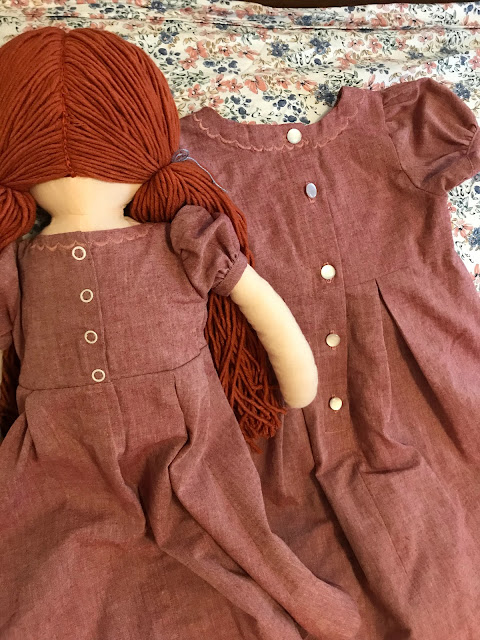 I chose to have my niece's dress close with plastic pearl buttons down the back. For the doll's dress I used white snaps. 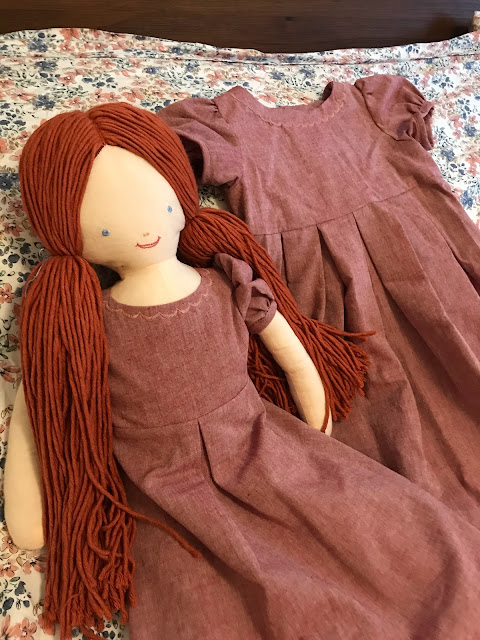 The fronts of the the dresses are rather plain, except for the neckline trim and the skirt pleats, because. . . 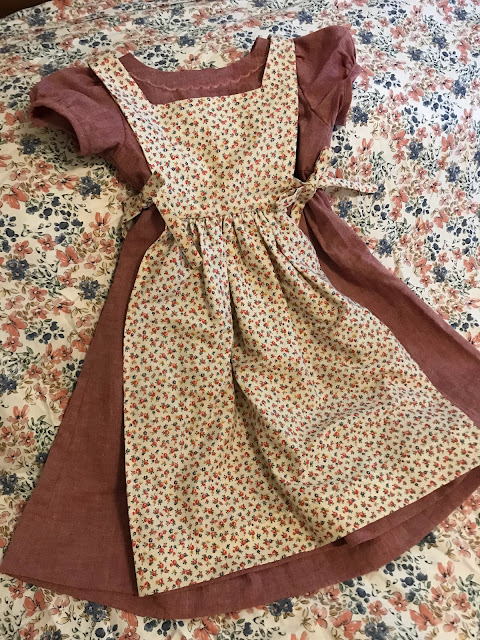 I made pinafores to go over the dresses! 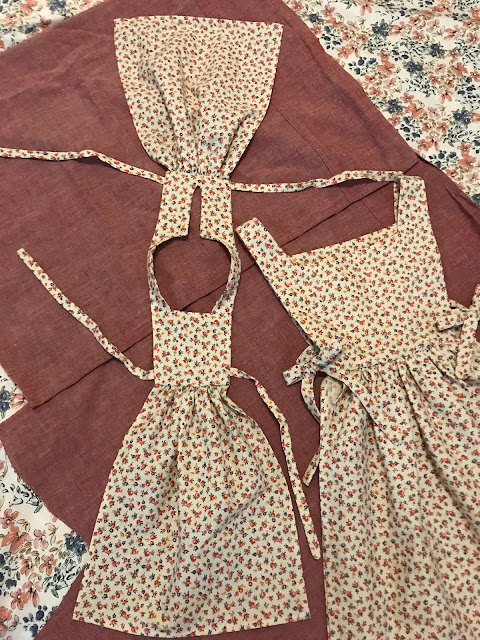 The pinafores are made without a pattern, from a scrap of floral cotton out of my stash. 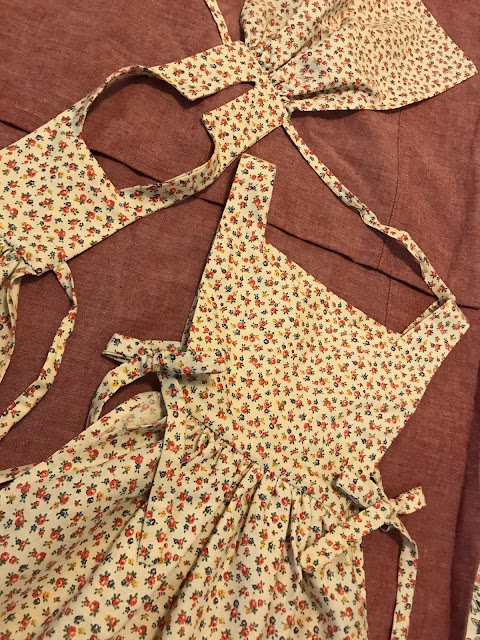 I used the dress bodice pattern pieces as a template to figure out the size of the pinafore bodices. The skirts are just rectangles, cut to be a bit shorter than the dress skirts. The fronts and backs of the pinafores are made exactly the same (other than the slit down the back of the doll's bodice to allow the pinafore to slip over her head), and they tie together at the sides. I decided this was the safest style of pinafore for an active toddler, since there were no long strings that could get wrapped around the neck during play. 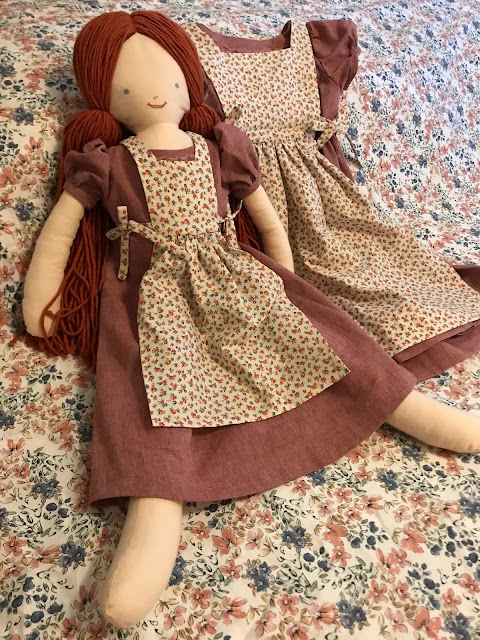 Fully clothed, the rag doll was all wrapped up for my niece's birthday party. 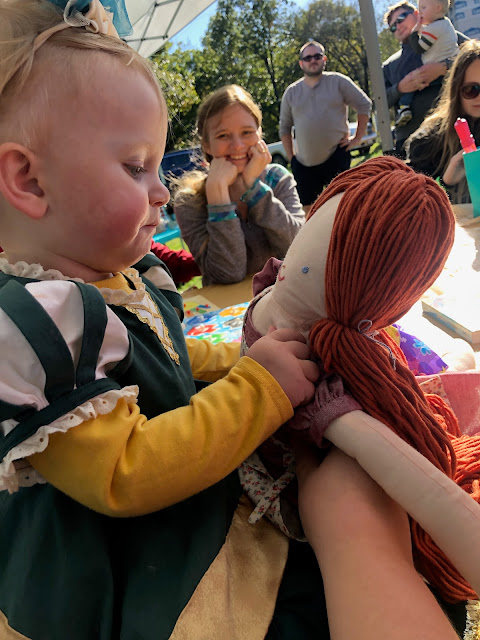 Upon unwrapping, my niece immediately kissed her new doll. 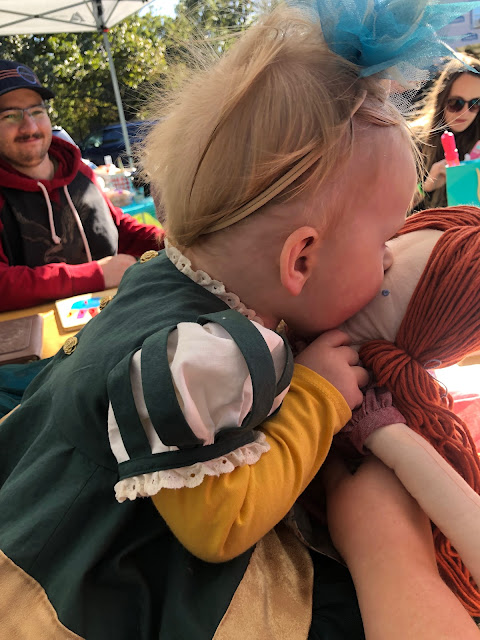 So I'd say the gift was a success! As for the matching dress. . . 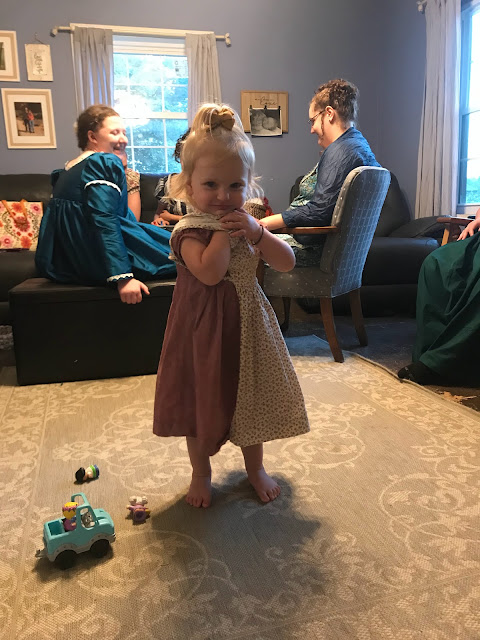 I hear tell she wore it for Thanksgiving, and Easter, and a few times in-between. 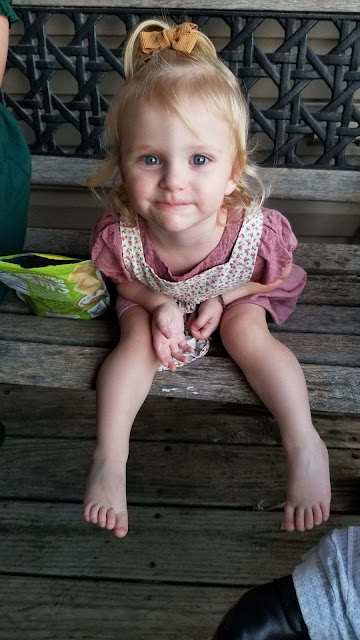 Most recently she wore it for my sister's Regency birthday party. 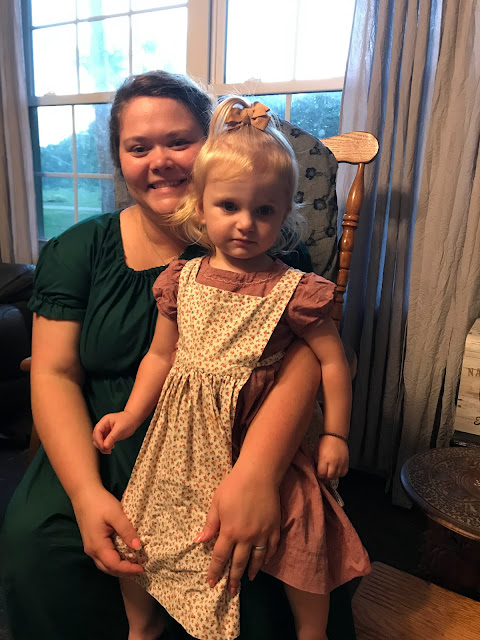 Where she looked absolutely adorable! 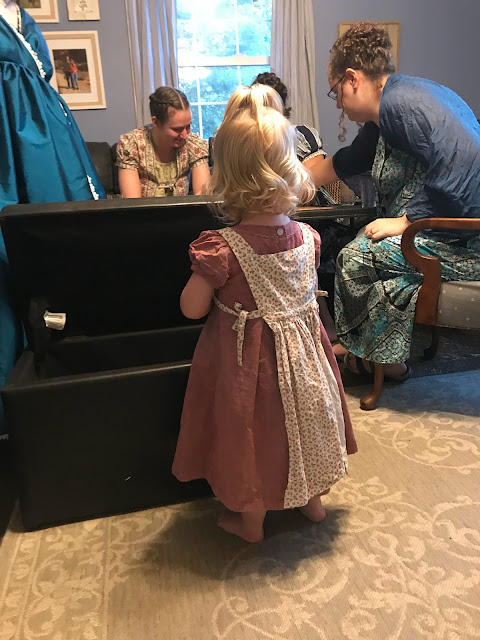 So I'd say that half of the gift has gone over quite well too! 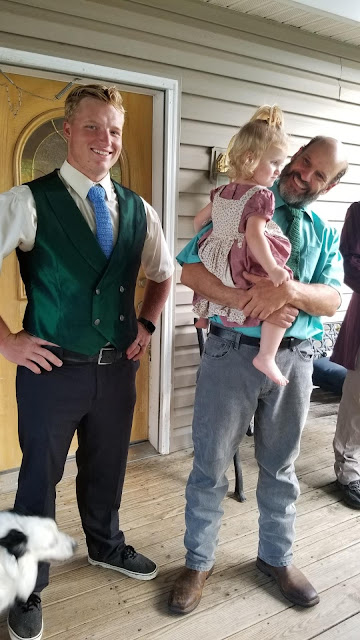