As many dresses as I've made for my sister, I hadn't ever made her a dress from the same era as my purple plaid wool dress. So, she informed me she wanted one. Well, of course, I said I'd make her one. First though, I had to figure out a pattern. She's at that stage where she's too small yet for adult patterns to fit her, so that ruled out just changing up the pattern I used for my purple plaid wool, and most children's patterns are too small for her now (why oh why do most only go up to a size 8?!?!?). Also, she's growing really fast right now so I wanted a dress that could be adjusted as she grew. The last historical dress I made her only lasted about 3 months before she outgrew it! Thus, I was limited to about 3 patterns, and none were quite right for an 1837-1842 dress. So I started looking through pictures of girls' dresses from that era, while keeping in mind my pattern options.
My sister really liked the sleeves on this one from the MET Museum, and I liked the bodice. I finally decided with a bit of finagling, the addition of a waistband, the loss of the drawstrings, and some lengthening of the sleeves, this pattern might just work. 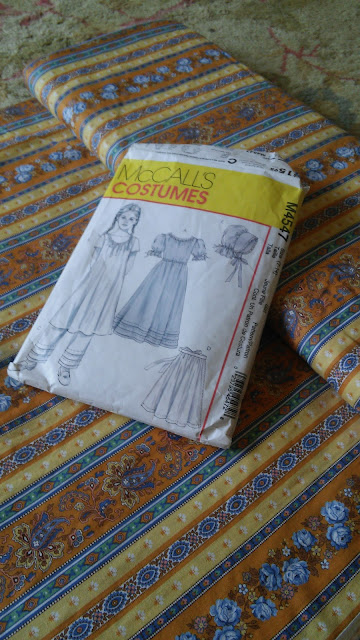 My sister picked out the yellow floral striped calico from my stash. There was about 5 yards of it, so it was plenty for the dress.
Once the pattern and fabric were picked out, it was time to start manipulating them into an adjustable 1837 dress. 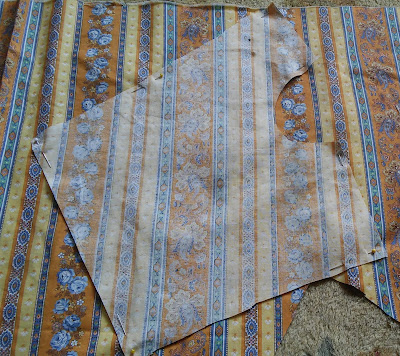 The bodice front I cut (almost) on the bias in 2 pieces. Once the center front seam was sewn, the stripes would make a "v", just like the bodice on this dress. The sleeves I cut long, then pleated into the armscye (which was piped to match the era). 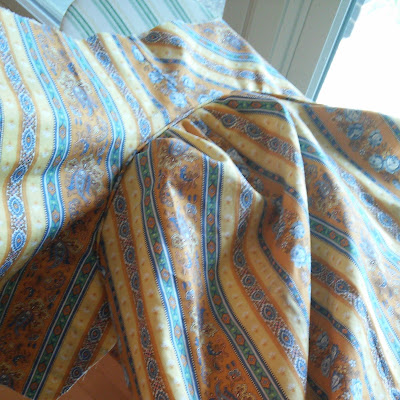 I then pressed the pleats so that they extended down the sleeve a little ways. 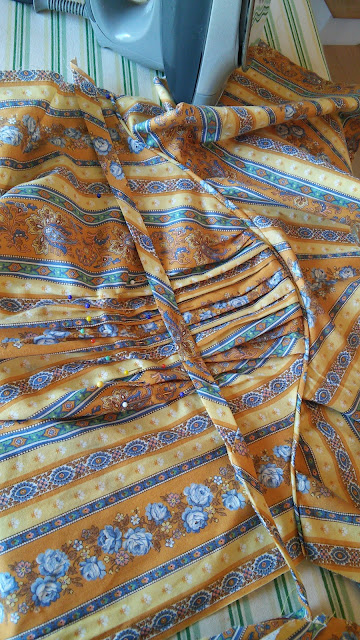 I sewed two bias-cut bands over the pleats to hold them in place. The bottom of the sleeve was then gathered into the cuff, leaving the middle nicely puffed. 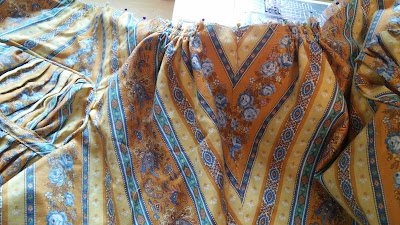 The top edge of the bodice was gathered, then sewn on to a wide bias strip. 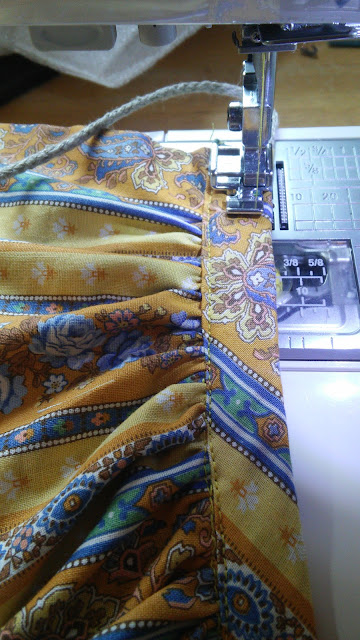 Once the bodice was done I pleated both it and the skirt into the waistband, sewed everything together, and voila! A dress. A very long dress that majorly needed to be shortened, but that had been my plan all along. I love the look of grow tucks, and they are very much historically accurate for the time. So, I made three 1 inch wide tucks in the bottom half of the skirt. 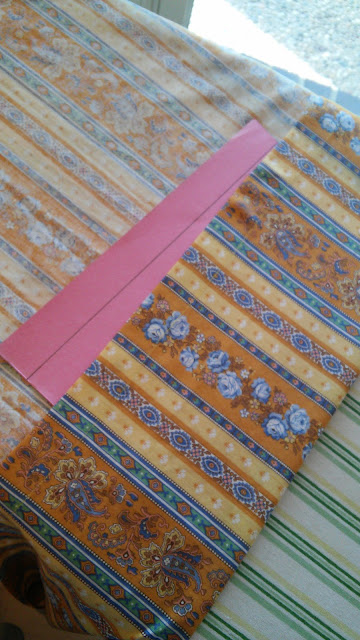 Now as much as I love the look of grow tucks, I hate making them, I can never get my tucks to run perfectly parallel to the skirt hem. They almost always come out slightly wavy and uneven, despite measuring and occasionally remeasuring. So this time I tried something new. I took a piece of paper and marked where, in relation to the hem, I wanted the tucks. Then I folded up the skirt, over the paper, lining up the hem with my mark. Then I ironed the tuck in place before I removed the paper, this way I could make sure nothing shifted. Finally I pulled the paper out and pinned. It worked! In the end there were 3 lovely, parallel, evenly spaced, growth tucks! 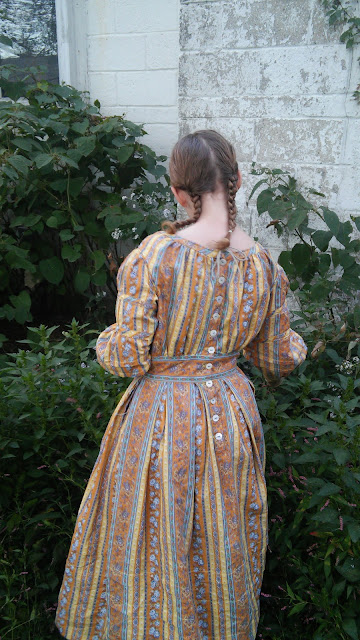 Finally I sewed some buttons down the back, and my little sister had just what she wanted, a dress from the same era as mine! 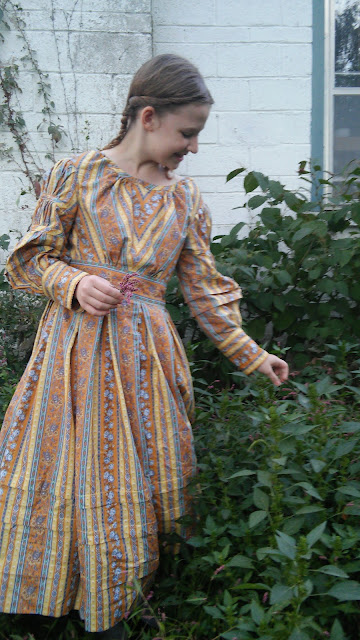 A dress with fancy sleeves and room to grow! 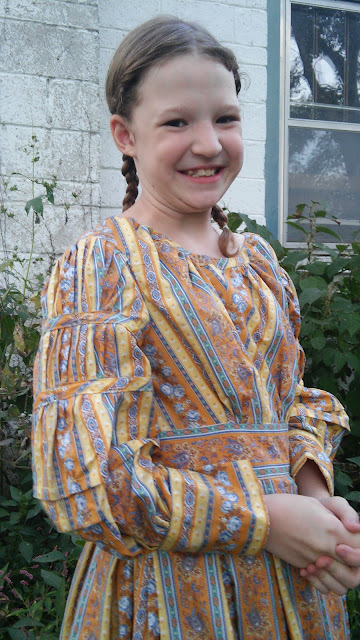 She and I wore our dresses to Walk Back in time, where her bonnet really stole the show! 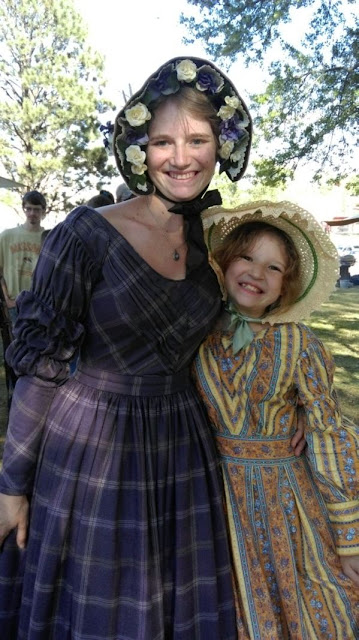 Oh yes, her bonnet. That was a fun project the two of us did together. 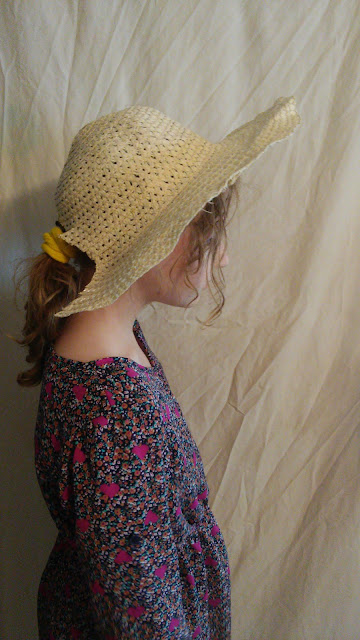 We started off with a flat "straw" hat, which we cut part of the back off of. 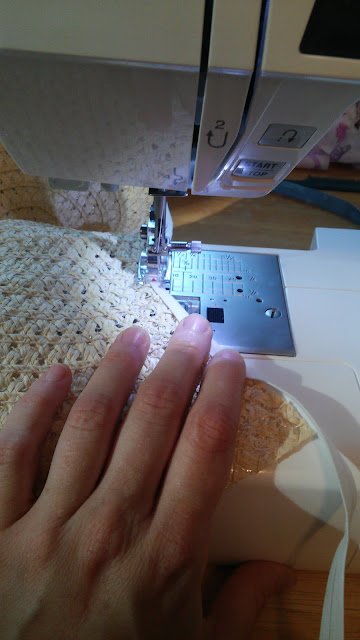 I sewed bias tape along the edge we had cut, to make sure the hat didn't come unbraided. 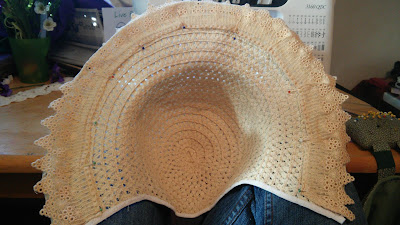 Then came the fun part, we started playing with lace, ribbon, and silk flowers to trim this straw hat turned bonnet. 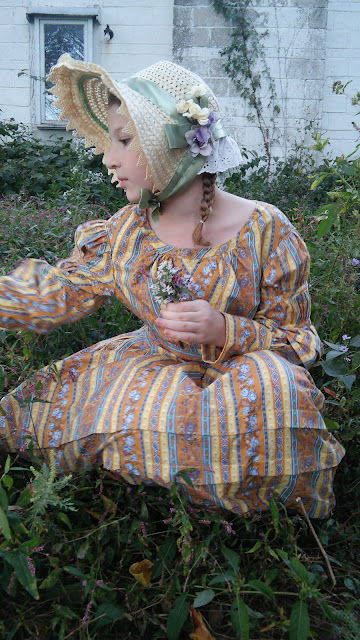 Playing with all the flowers and trims was lots of fun, and the end result lived up to our expectations! 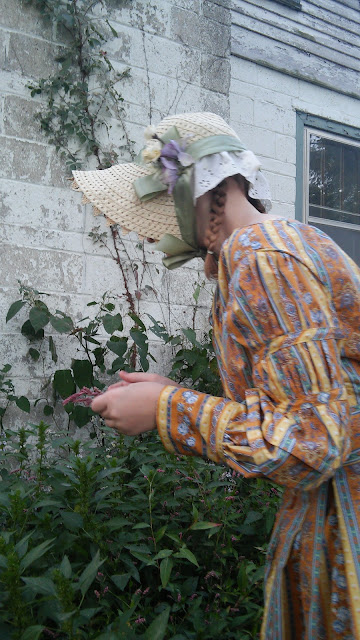 Once her bonnet was done, my sister had a lovely 1837-40 ensemble ready to be shown off! 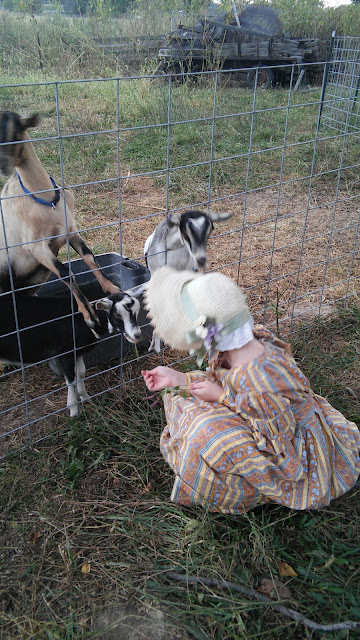 (to both goats and people) 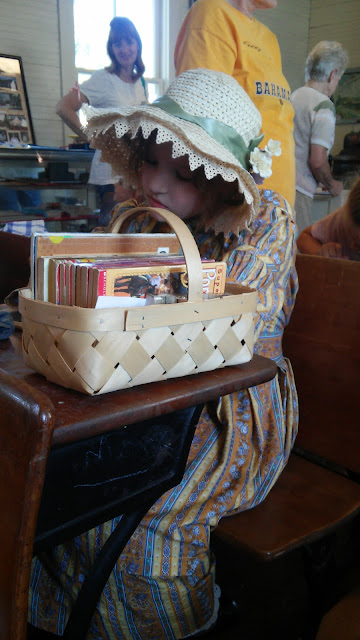 She looked right at home in the schoolhouse at Walk Back in Time. 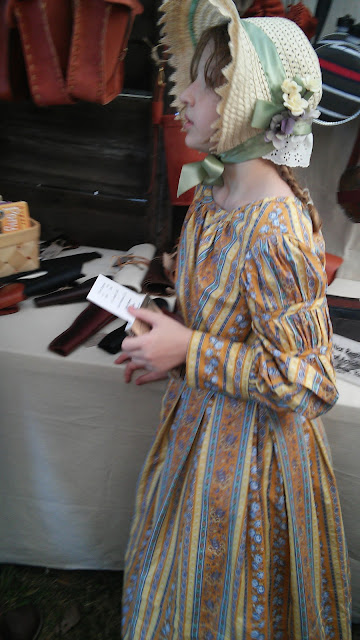 She fit in pretty well at the general store too.

The only downside to her dress? The fabric is rather old, and weak in some places. After one wear, the bodice wound up with a couple holes. Nooooooooooo! 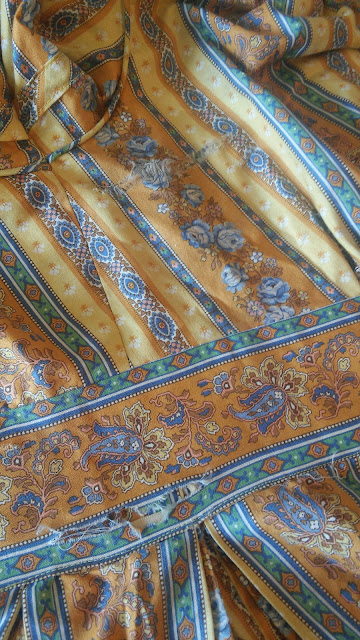 Well we had spent the time designing and figuring out a pattern for this dress. Then I sewed it, and spent plenty of time figuring out those sleeves. Plus, this was a dress with room for her to grow. It was not going to be retired after only one wear! So I patched it. 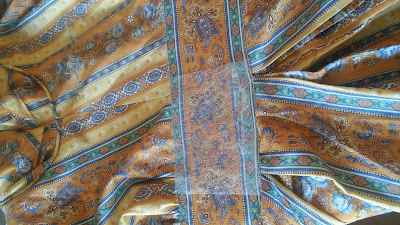 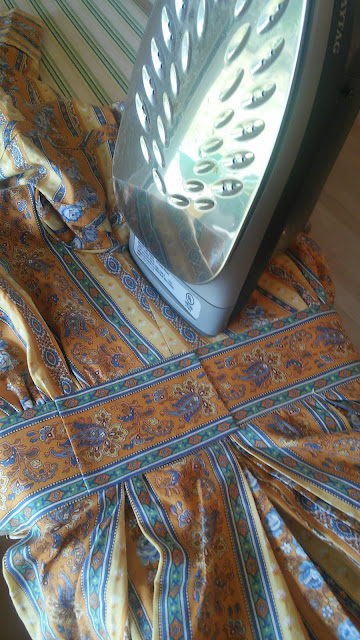 Then I cut a patch from the leftover fabric, did my best to match the print, and ironed the patch in place, fusing it to the original fabric. Finally I stitched down the patch around the edges. Now her dress is (almost) as good as new, and ready to wear again! 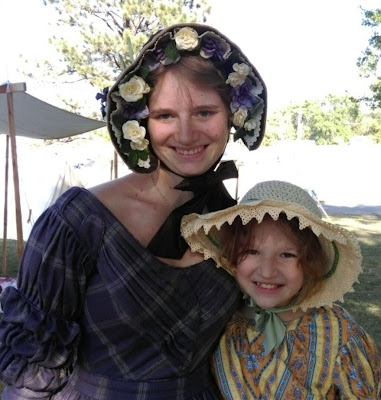 We already have plans to wear our dresses to another Heritage Festival next weekend. I love having my sister dressed from the same era as me. I'm already researching girl's dresses for the next era I have a dress planned for. Hopefully we pick a stronger fabric for the next one!