This Jacket Suits Me! #therefashioners2017

It's no secret that I've missed my sewing machine this year. Like really missed it. Never more so than at the end of July however. As July neared it's end I was mindful of the fact that The Refashioners 2017 would be beginning soon, and that I might have a hard time participating this year - you know, moving countries every month and my lack of a sewing machine really gets in the way of refashioning. 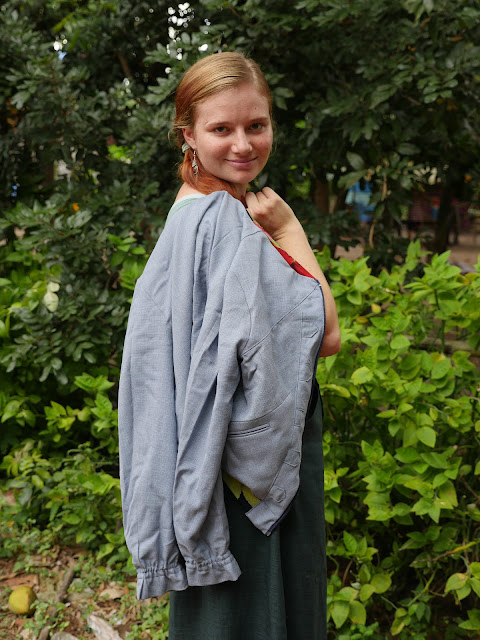 Then The Refashioners was actually announced. My days of trying to guess the theme and wondering if there was any way I would be able to participate were over. I had my questions answered! Well, one of them any way. 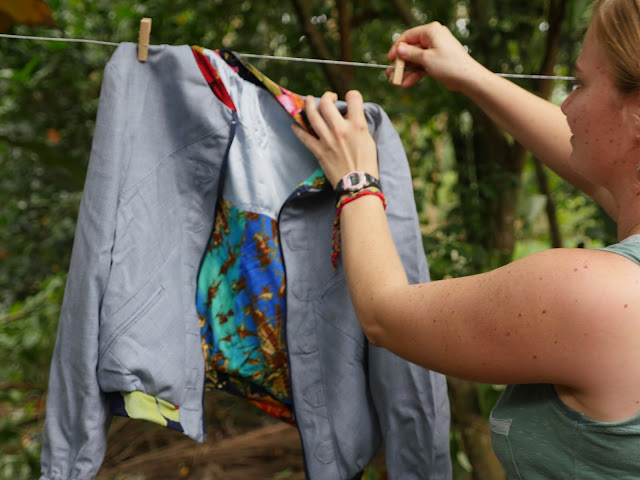 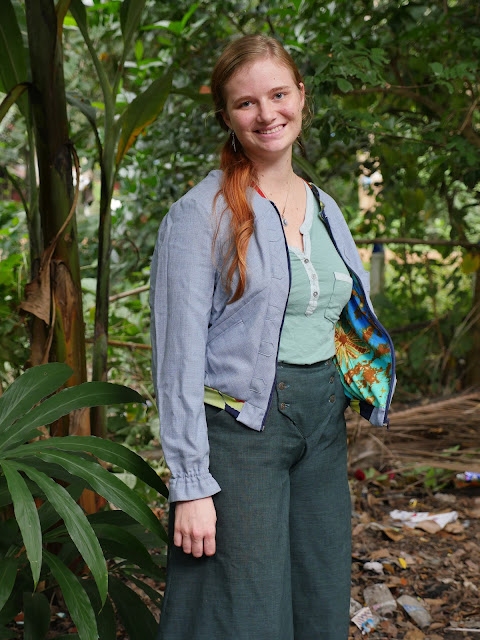 Following the theme announcement, there was another announcement over at Makery, the hosting blog of the challenge: rather than running from August 1 to September 30, like past years, this year the challenge would run from September 1 through October 31. This meant if I started my project at the beginning of August I would have an entire 3 months to complete it! Considering at this point I thought I would have to completely hand sew my entry, this was perfect! My decision was made. I would be participating in The Refashioners 2017.

That decided, my first step was to actually find a suit to refashion. Easier said than done when you're in a foreign country where you don't know the language, don't know where to find a thrift store, have no car, and are on a very limited budget. 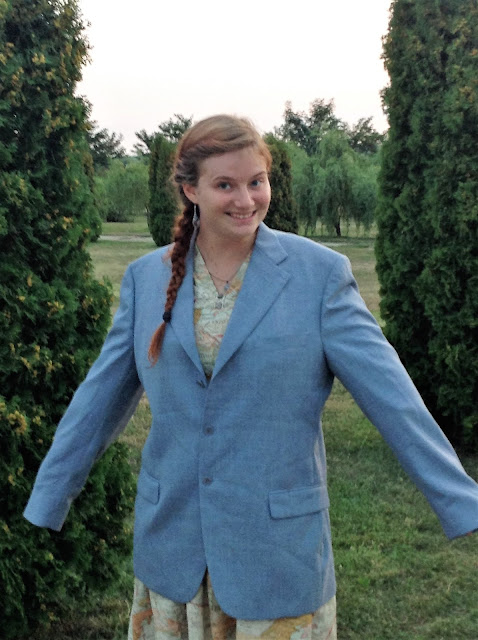 Well, I completely lucked out one day when I was exploring the city of Oradea, Romania, with my teammates. As we were walking down the street I caught sight of a thrift store, so I checked it out. Inside, I found no 2 piece suits - but I did find this pretty blue wool/rayon blend suit jacket! And it was only 20 lui ($5 USD)! I snatched it up, took it back to my home for the month, and began dismantling it - while video chatting with my little sister one night. 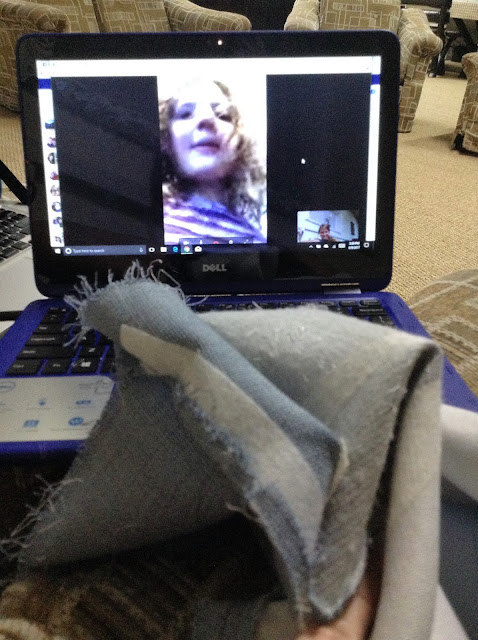 Now as soon as the Refashioners was announced I knew exactly what I wanted to make out of a suit coat - a bomber style jacket. Something like this:

And front detailing similar to this suit jacket I saw at the Oradea mall: 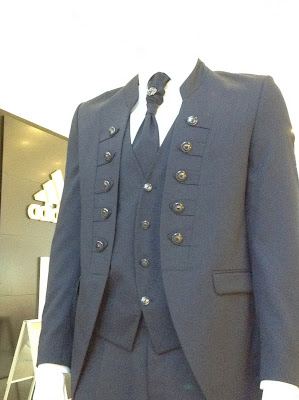 So once my suit coat was dismantled I started draping my bomber jacket right onto myself. 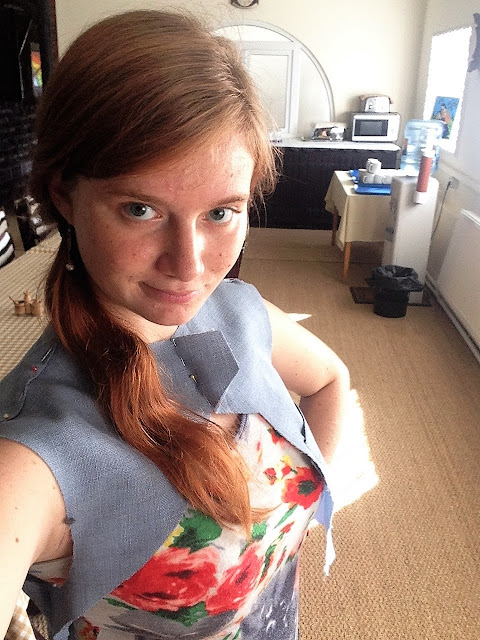 As I draped I pinned all my seams together so that I could sit down and hand sew them - but then I received a fantastic blessing! 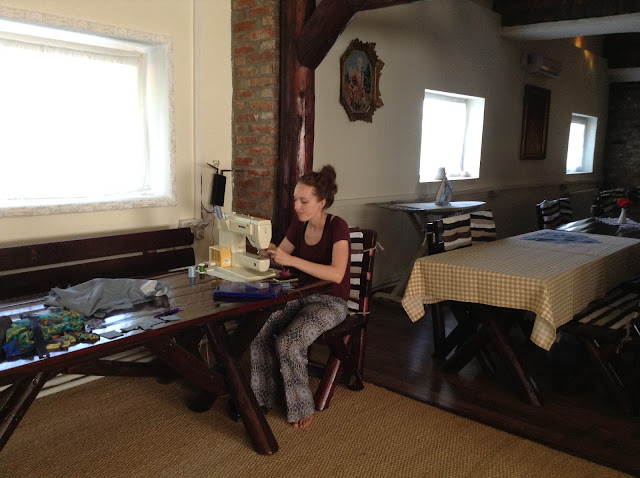 The sewing room I got to work with in Romania? They loaned me a sewing machine over a 4 day weekend!!!! I borrowed an iron and ironing board from the hotel laundry and I was set! One end of the hotel dinning room became my sewing room and the jacket refashioning began in earnest. 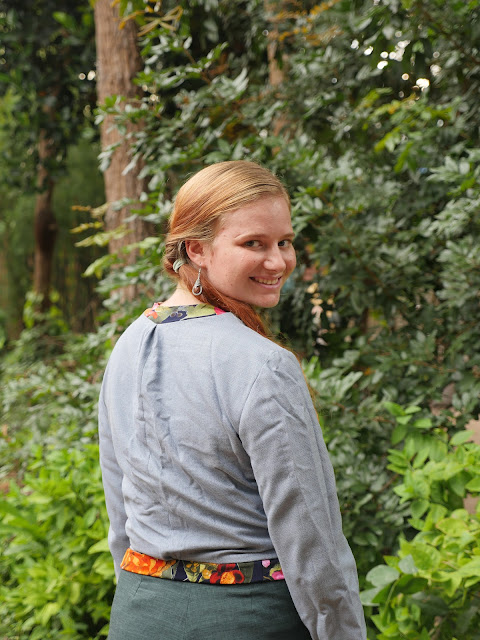 The back of the suit coat became the back of my jacket. 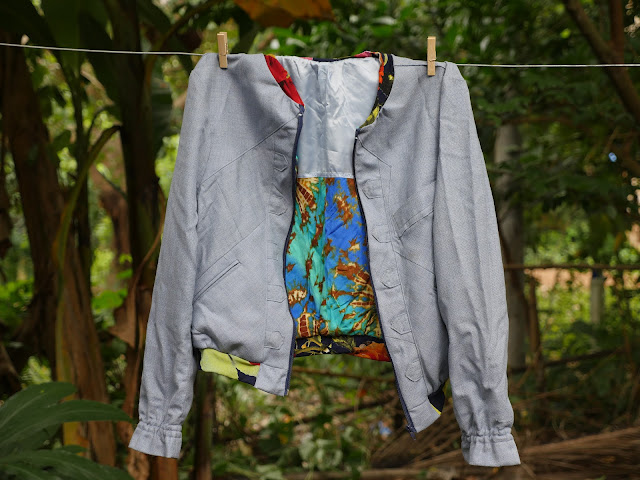 The front of the suit coat was completely cut up and sewed back together in a way that made use of all the pockets and added fun details. 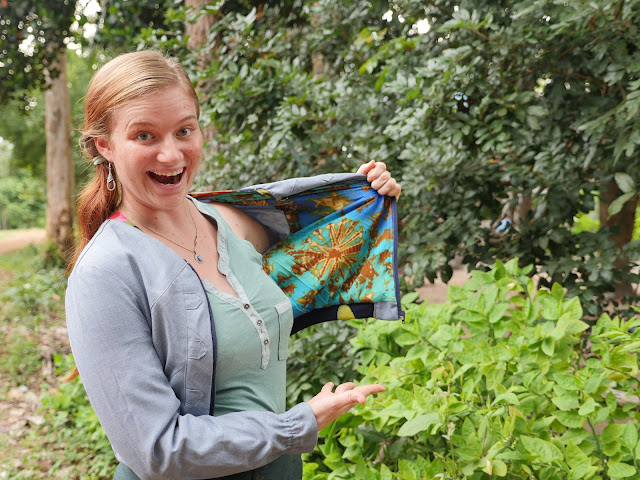 I used as much of the original lining as possible to line my new jacket, but the suit coat wasn't fully lined so I had to add some "new" lining as well; rayon left over from a dress I refashioned into a shirt. 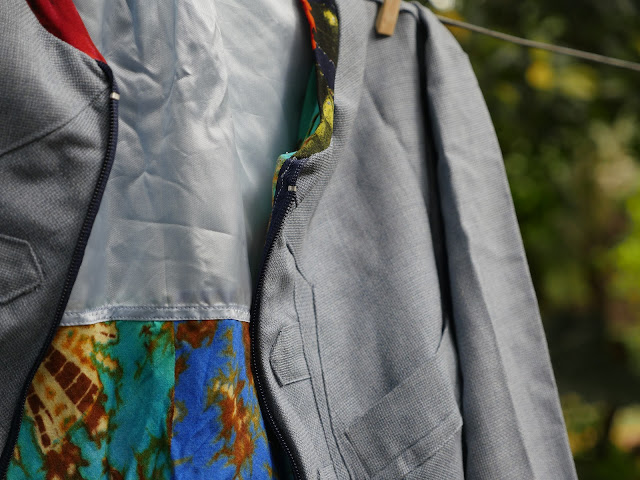 The original sleeves became my new sleeves. I just shortened them from the top, took them in a bit, and added elastic cuffs using some elastic left over from an African mu-mu I refashioned into a shirt for a friend. 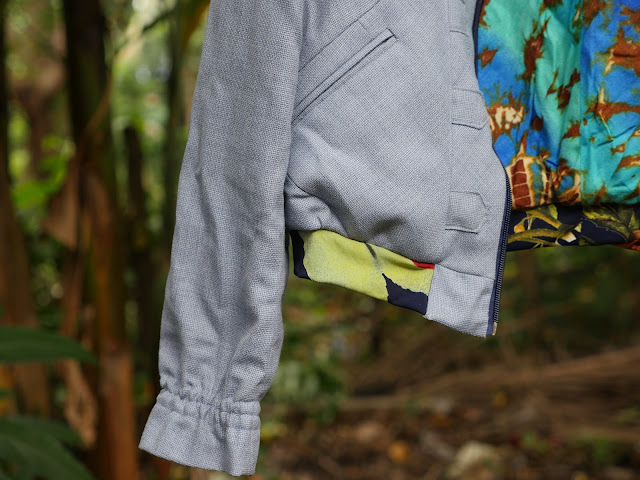 I made the hem band and neck band out of a scrap of polyester knit left over from refashioning a jumpsuit into a dress for another friend. (Dang, I've done more refashioning this year than I realized!) 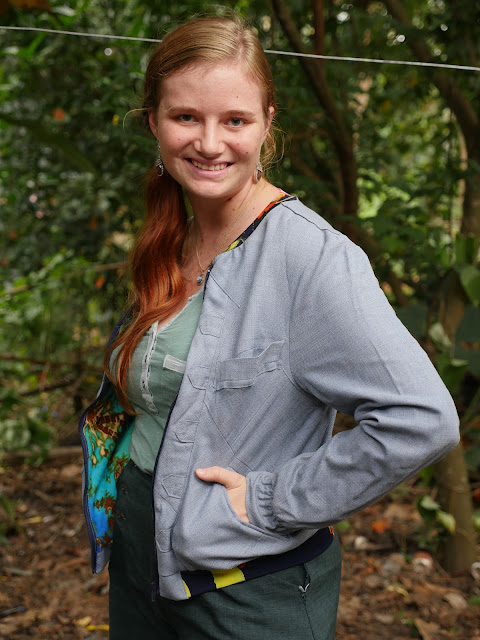 The zipper? I picked that up for 50 cents at a discount store in Montenegro! 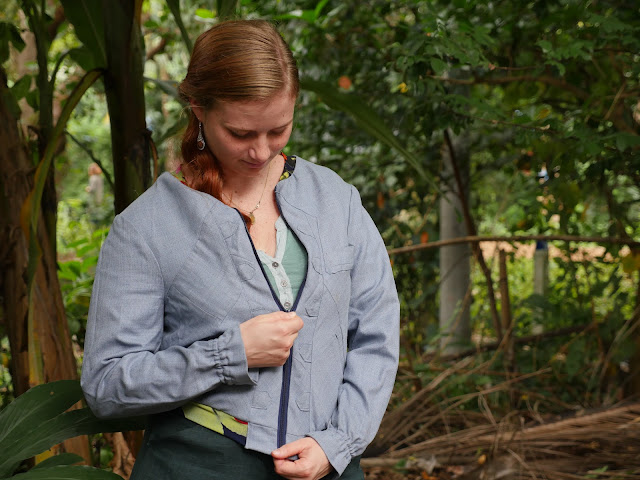 Once I brought that sewing machine 'home' it took me less than 2 days to sew all the pieces together and have a brand new jacket!

One that I'm absolutely in love with! 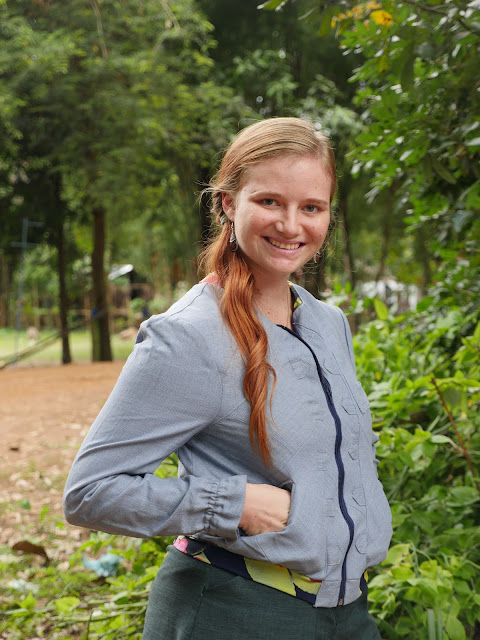 I am beyond thrilled that I was actually able to get this jacket made on the race! 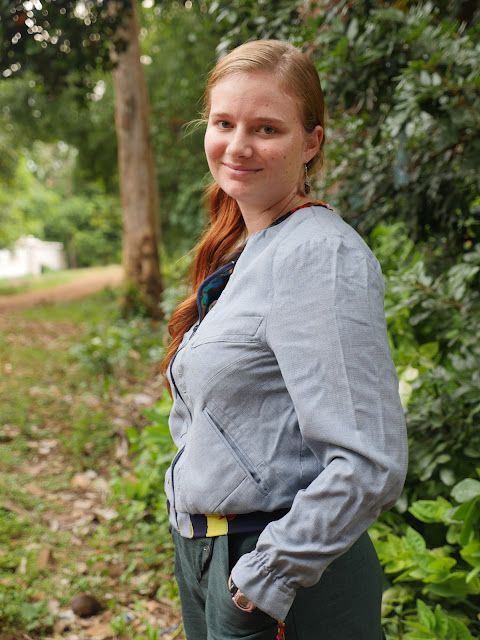 And I am equally thrilled with these pictures my teammate, Kelsay Singleton, took of the completed jacket! Aren't they amazing? 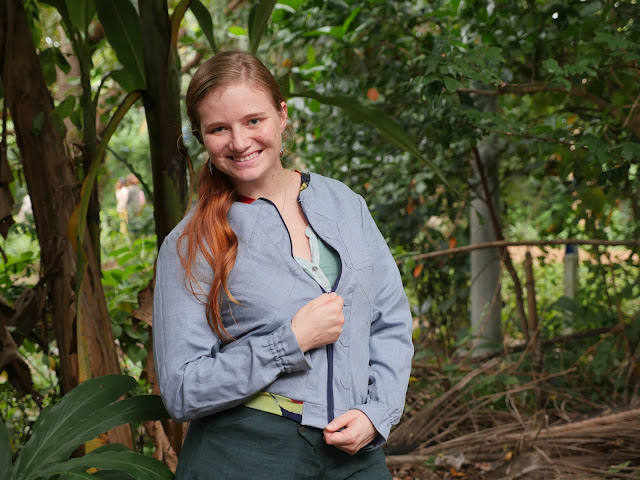 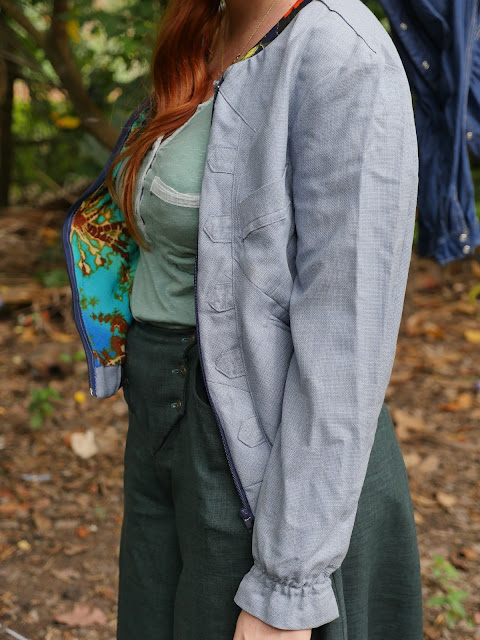 And if you wanna take part in The Refashioners 2017 - do it! Head over to Makery to read all the details! I highly recommend participating! It's a ton of fun!