"Wouldn't it be fun to make my little brother a shirt to match our Christmas dresses?" 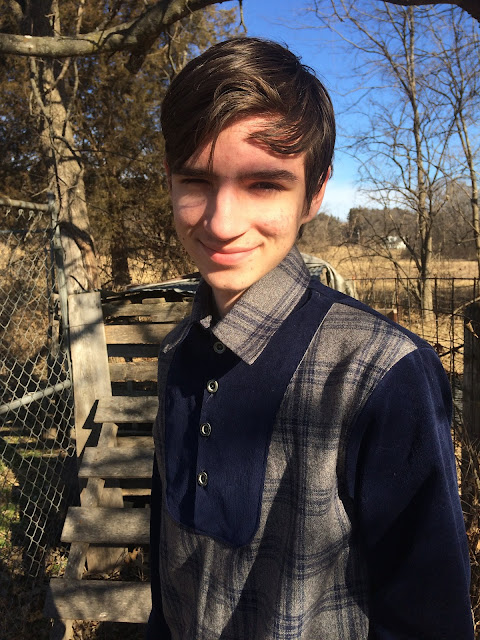 That was my thought when I saw Burda 7525 in the pattern catalogue during a pattern sale back in December. "Wouldn't this shirt look nice made up in our gray and navy plaid flannel with some navy accents?" 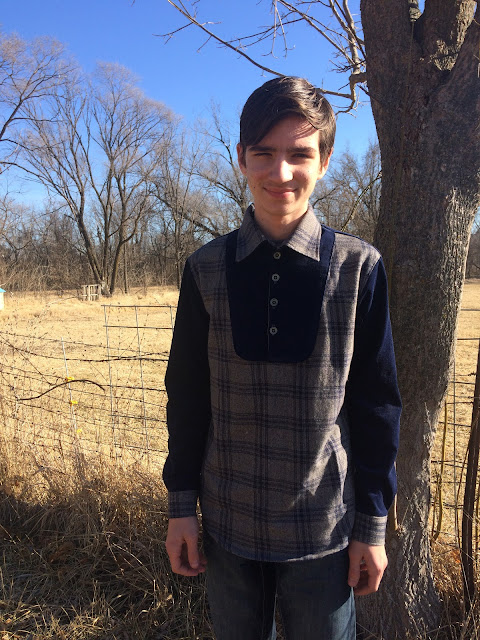 Since I had these thoughts running through my mind, the pattern came home with me. A Christmas shirt for my little brother was going to happen! Only, it didn't. I ran out of time. And fabric. And motivation. 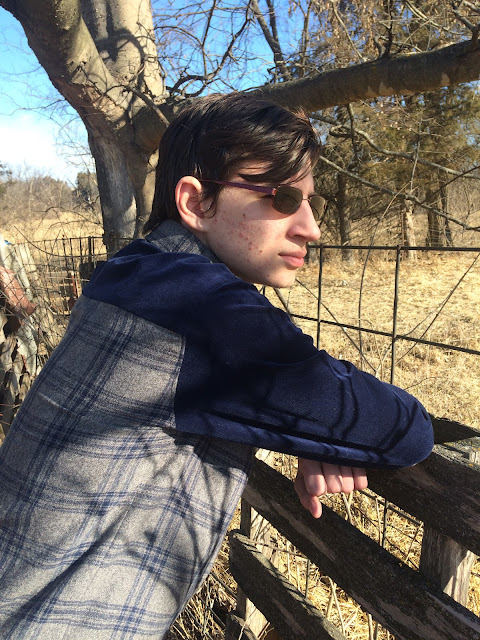 Once all three Christmas dresses were done I had no time to complete another project by Christmas Eve, and I had less than one yard of flannel left. Not enough to make a shirt. I checked 3 different Joann's stores in the area to see if I could get more of the same fabric. Nope, none of them had any left in stock. It appeared that this Christmas shirt was just not gonna happen. 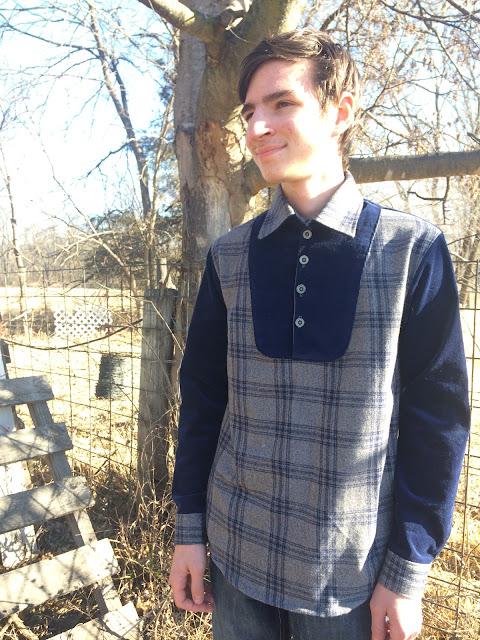 Then inspiration struck when I found this navy needle corduroy on sale for 60% off. Wouldn't it look handsome paired with the flannel? I bought a yard of it, brought it home, and the Christmas shirt plan was back on! Other than the fact that I still didn't actually have time to make such a shirt. 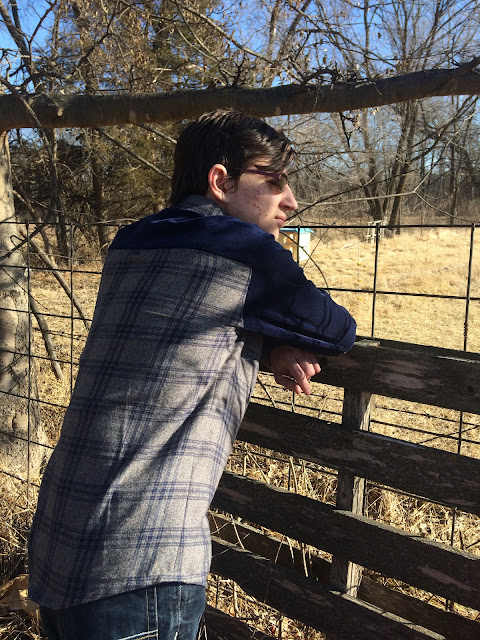 Christmas came and went and the fabrics and pattern sat in my sewing room, waiting to be made into a shirt. I just had no motivation to make the shirt now that Christmas was past. Until last week.

At the beginning of this year I joined a "52 Week Sewing Challenge" group on Facebook. My hope is that by participating in this group I'll manage to complete most of the planned sewing projects I never seem to get around to. Every week a challenge theme is given, and the goal is to complete something that week which fits into the theme. Well, I have a lot of planned projects that I already have the supplies for, so it is no problem for me to find a project in my stash that fits the theme every week!

Well, last week was week 4, and the theme was "Sew something for a boy." This was just the motivation I needed to make my brother's shirt! The fabrics and pattern came out and shirt construction began! 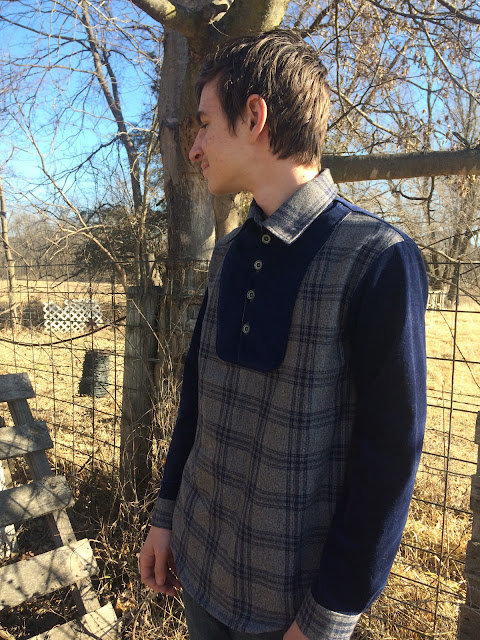 As I've never actually made a guy's shirt before, I did something incredibly unusual for me and actually read the pattern instructions and followed them to the letter - mostly. I did make a change or two to the design of the shirt and the construction order, but how could I not? (And these changes were actually made due to fabric shortage, not 'just because'.) 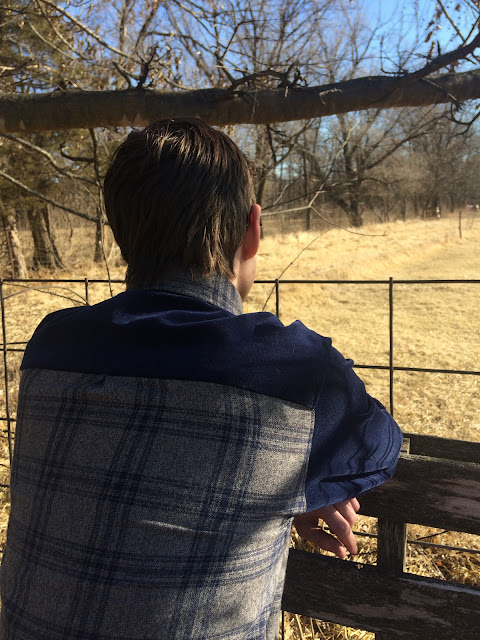 The biggest change I made to the shirt was this - I added a back yoke. No, I didn't do this just as a cool design feature (though I love how it turned out!). I cut out the shirt with a back yoke because I didn't have enough flannel to cut out the back of the shirt all in one piece the way the pattern was written. So, I improvised, and it turned out pretty darned well! 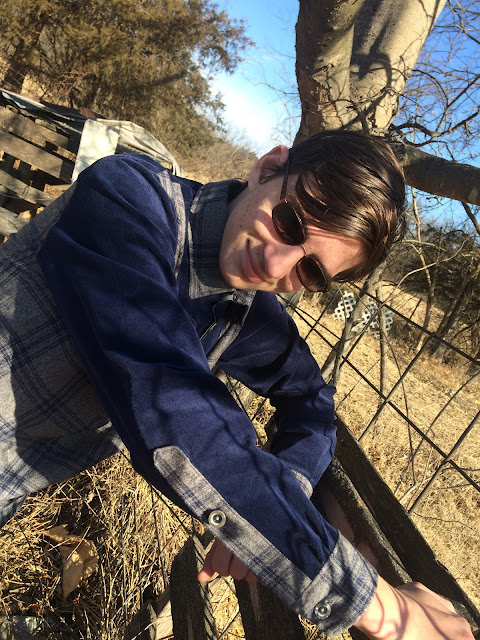 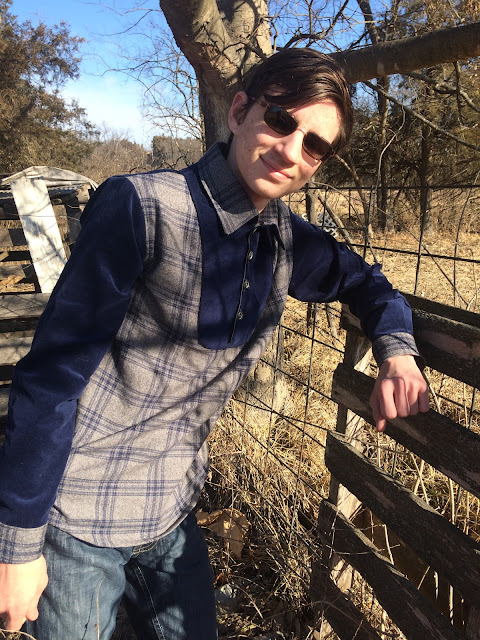 Flannel, corduroy, and fun details - a month after Christmas and my little brother finally got his Christmas shirt! I'd say it looks quite handsome on him, but I might be a little biased :)

Posted by Alyssa at January 31, 2018
Email ThisBlogThis!Share to TwitterShare to FacebookShare to Pinterest
Labels: 52 Week Challenge, Sewing, Sewing for Boys