Overalls. Are they not adorable? When I saw Simplicity 8447, a reprint of a 1940's overall and blouse pattern, I immediately knew I wanted to make the overalls for my sister. 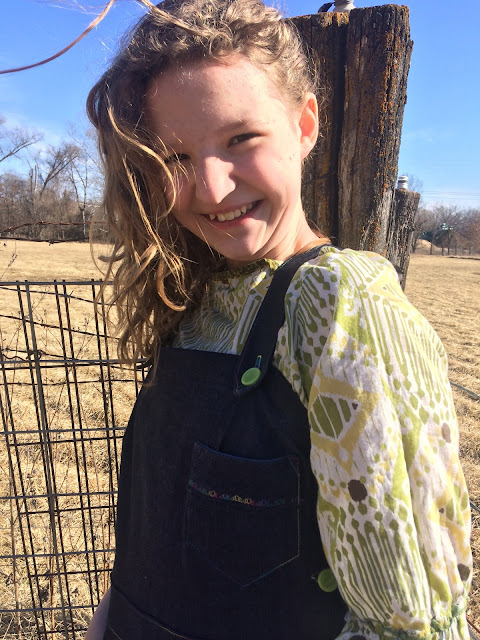 This sister of mine, however, is 13 and has her own style and opinion on what she wants to wear, as she should. So, when I showed her the overall pattern and mentioned I'd like to make a pair for her, she kind of wrinkled her nose and shook her head. Apparently she was less enamored by the idea of a pair of 40's overalls than I was. Well, then. I supposed the overalls would just not be happening. 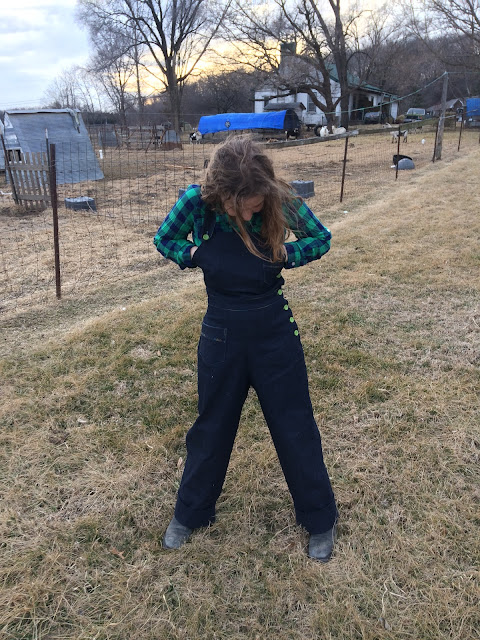 Thankfully, after a few days of me casually mentioning the overalls, my sister changed her mind. She decided that they just might be cute, and gave me permission to make her a pair. Woo-hoo! The pattern was purchased and project overalls could commence! Once fabric was acquired. 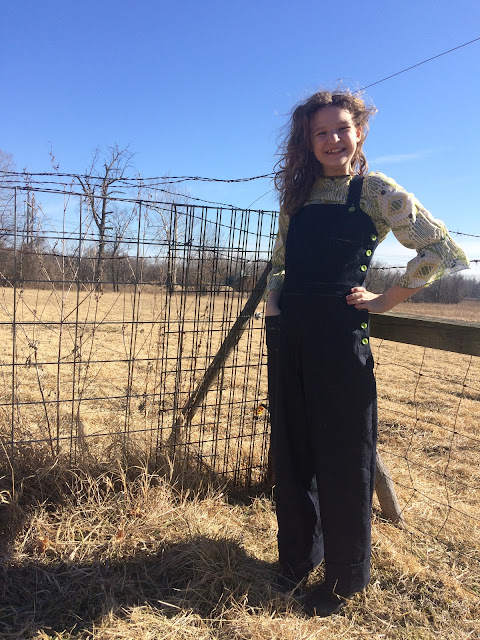 The right fabric came along about a week later. My mom, sister, and I went to an Amish community near us, and in one quilt shop I found a small stash of clearance fabrics for 50 cents a yard. I snatched up about 2 yards of each fabric from the pile that appealed to me. One of those fabrics was this dark wash stretch denim. Once I got home with that fabric, I knew it was just the thing to make these overalls out of. 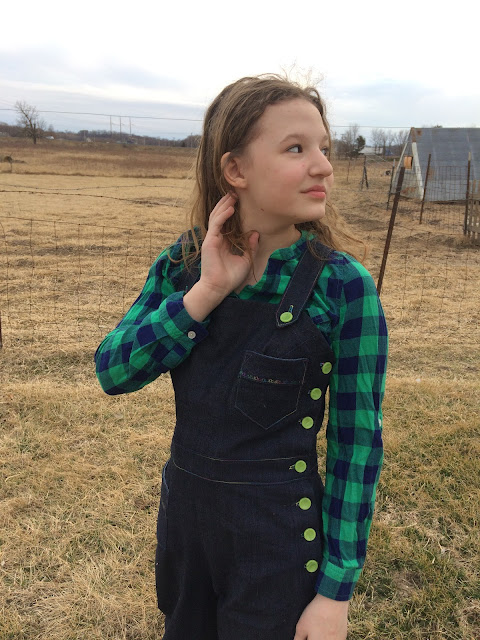 Finally, I was ready to sew the overalls! I asked my sister if she wanted rainbow or denim/gold top stitching on her new overalls, and she picked rainbow. Next, I sent her to my button stash with instructions to pick out a set of 9 large buttons for side button closure. She returned with these lime green flat buttons. There were exactly 9. Perfect! 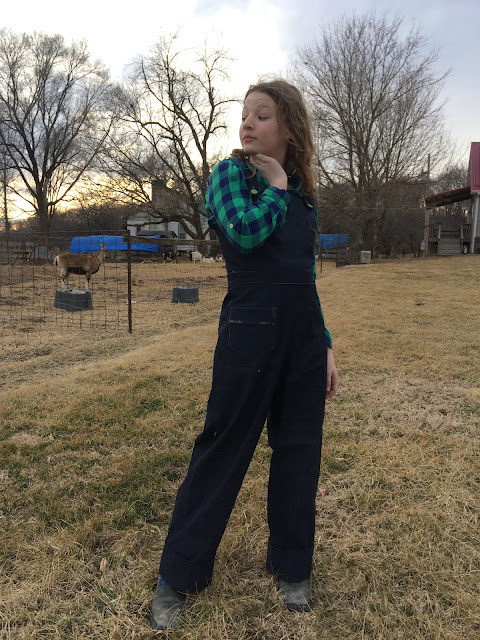 The overalls proved to be much easier to assemble than they first appeared! I was amazed by how quickly and easily they came together! I sewed up the pattern exactly how it was written, except for a few small changes. Originally, the straps were supposed to button in the back, not the front. Well, that seemed unnecessarily annoying to me, so sewed the straps onto the back of the overalls, and made them button onto the front. 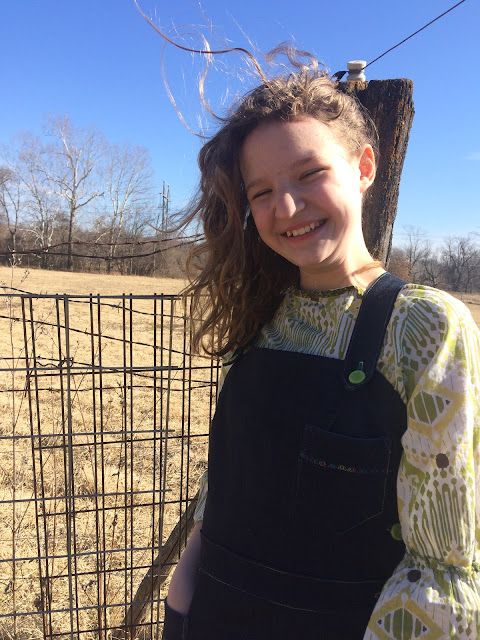 I'm a fan of how both the front and the back look with this alteration. 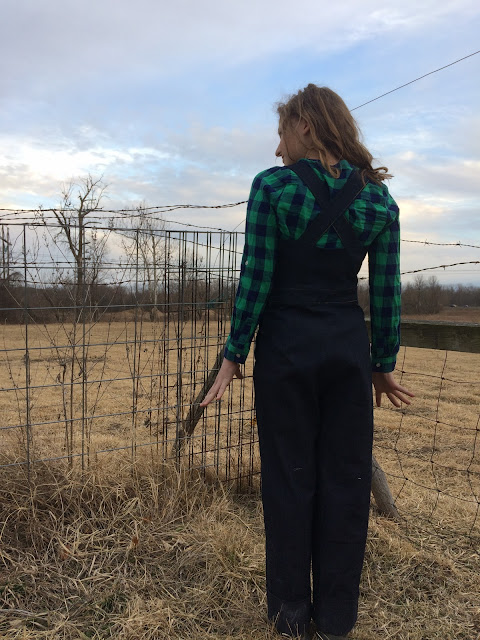 Second, I kind of messed up when cutting out the overalls and completely forgot to cut out the back facing piece. Well, I didn't discover this until I was ready to attach that facing, and I did not feel like digging the facing pattern piece out of the envelope and tracking down my fabric scraps to cut one out. So, I pulled out some bias tape instead and used that for the back facing. It worked splendidly! Now, you will also notice that the ends of the straps stick out below the bias tape facing. What's up with that? The inside of the overalls would certainly look neater if I'd trimmed the excess length off and hidden the ends of the straps under the facing. Well, yes. But these overalls are for a young lady who just keeps growing at an astonishing rate! So, I left the extra length so the straps can be lengthened in the future if need be. 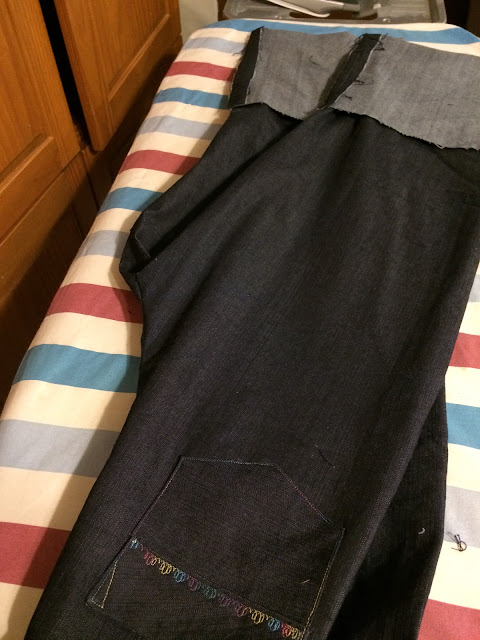 Speaking of length - this pattern must be drafted for extraordinarily tall people as the legs required an 8 inch hem in order to fit my 5 foot, 3 inch tall sister. So, to use up that extra length, I made deep cuffs, which turned out adorable. 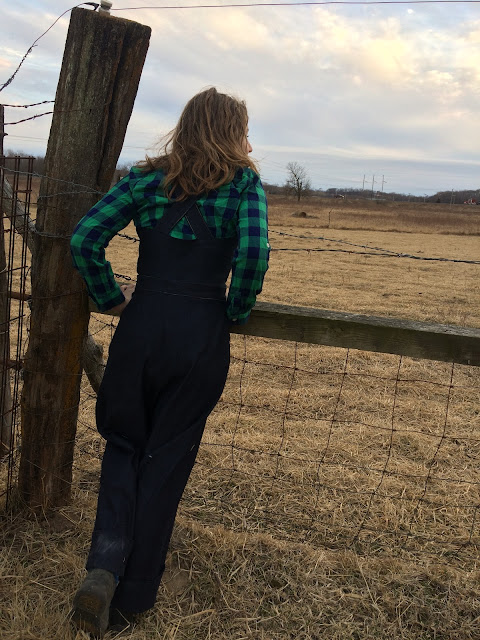 My sister was quite happy with the overalls when I finished them! However, she did request one slight addition to them. 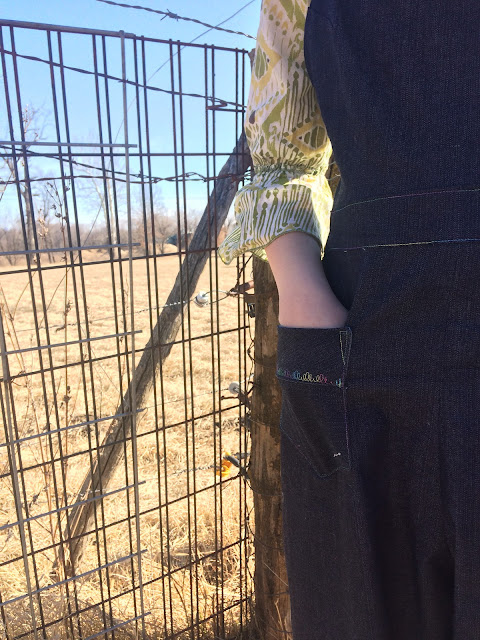 I made the overalls according to the pattern with two pockets. One on the pants and one on the bib. Well, according to my sister, that's just not enough pockets. So, she's requested another. 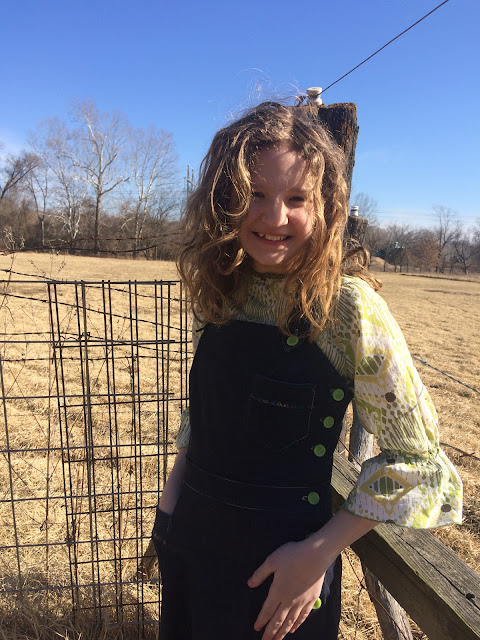 Thus, once they come back through the laundry, these overalls will gain a third pocket. And then, I hope they will get an excess amount of wear! 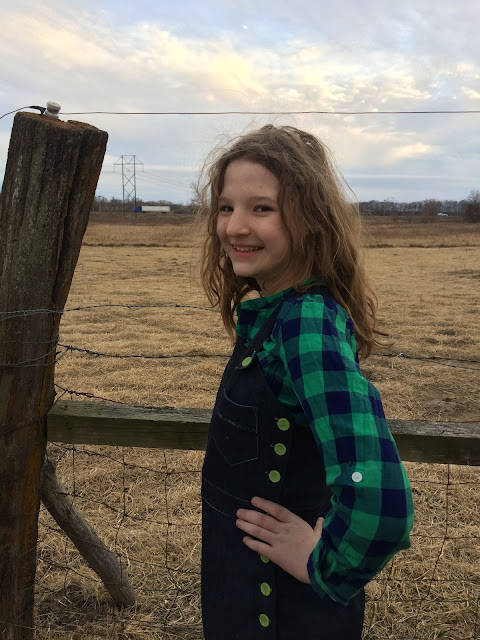