Back at the beginning of the year I decided I was going to make more clothes for my brother. I made him a camo jacket, and he loved it. Then I made him a flannel and corduroy shirt, and he was less enthused. So, at that point I set out to find something I could make him that he would actually like and wear regularly. Something that wasn't a jacket. Something he could wear year round. I decided to make him T-shirts. 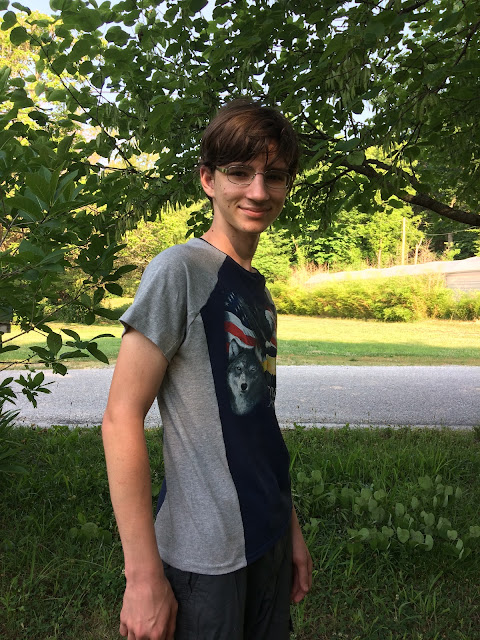 Yep, it sounds a bit boring, but really, T-shirts don't have to be boring, not if you have the right pattern at least. I needed a T-shirt pattern basic enough my brother would be comfortable wearing it everyday, yet interesting enough I would enjoy sewing it. This perfect pattern turned out to be McCall's 7486, a paneled raglan tee that just begged to be colorblocked. 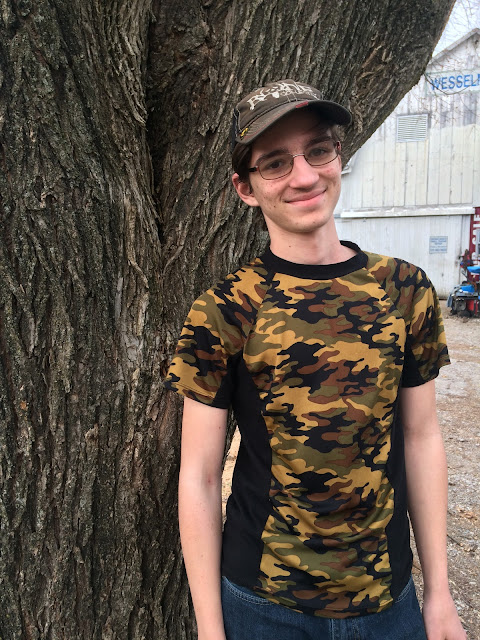 I bought the pattern on sale, then used it to whip up a black and camo shirt for my brother - and he loved it! So, the following week, I made him a few more in some other colors. Those too, he liked and wore! Success! I'd found the ideal garment to make my brother. My mind was  full of all the possible color combos I could make. Soon my brother's closet would be full of shirts made by me! Unless I got distracted with more pressing sewing projects. Yep, that's exactly what happened. After that initial run of shirts, I didn't get around to making anymore for my brother - Until I found a pressing reason to do so. I signed up for a blog tour to motivate me to sew more shirts for my brother.
So welcome to my stop on the Guys and Patriotic Vibes blog tour, hosted by Made for Little Gents! 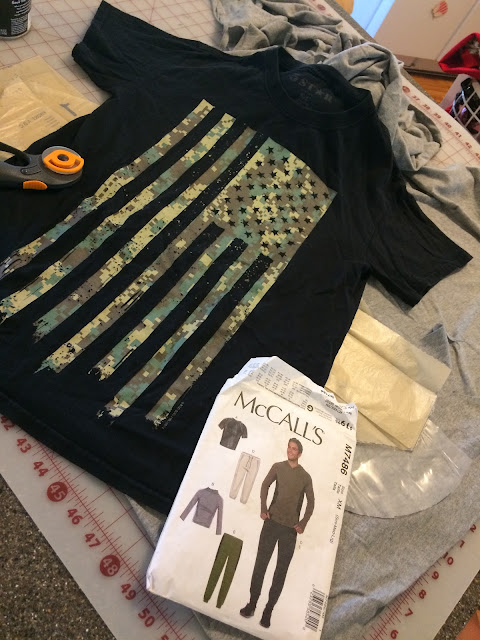 My brother had a couple of patriotic T-shirts he loved, and outgrew. As he talked of replacing his very favorite camo American flag tee an idea hit me - I could make him something out of his outgrown shirt. I could turn it into a shirt that would still fit him! I explained my idea to to the little brother and he agreed, presenting me with two of his favorite outgrown shirts, ready to be re-fashioned! 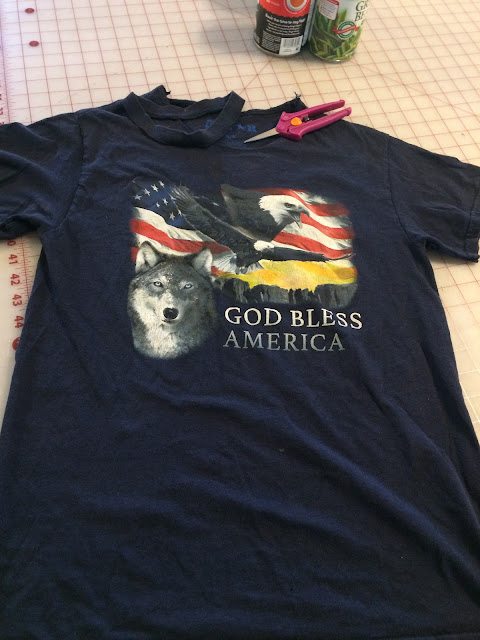 First I very carefully trimmed the neckbands off both shirts - I would re-use those on the new shirts.

Then, I cut apart both T-shirts at the side seams. This allowed me to lay both the front and back out flat and fold them in half lengthwise for cutting. I carefully centered the pattern piece over the front design and cut the front panel of McCalls 7486 from the front of the original shirts. Once that was done, I cut the center back panels from the back of the shirts. 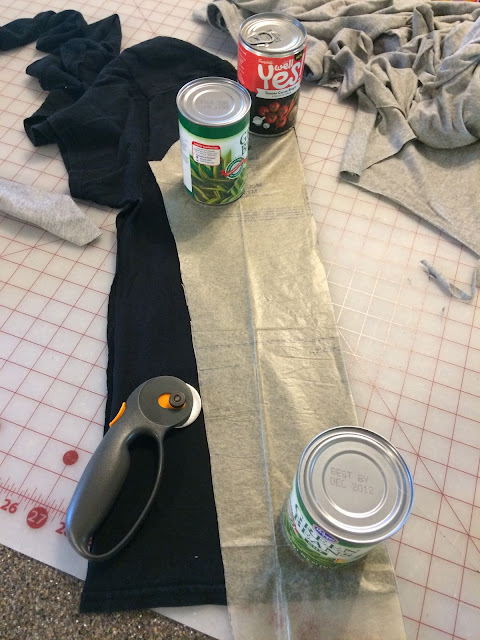 Finally, the sleeves and side panels were cut from light gray cotton jersey knit flat sheet, and I got the shirts sewn up one evening after work. 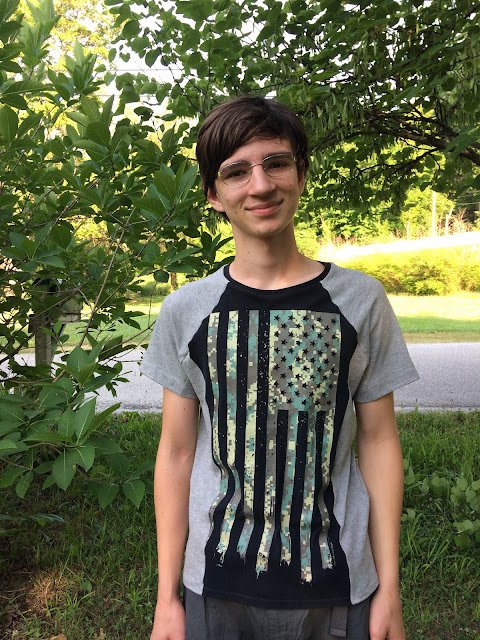 When the shirts were done, I practically danced up to my brother's room to present them to him. I was thrilled with how the shirt refashion had turned out! 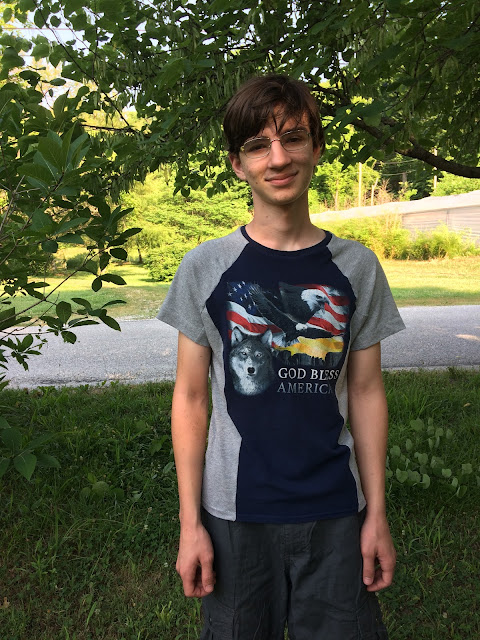 And, upon inspecting the finished product, my brother seemed pretty pleased as well. Now I fully anticipate seeing him continue to wear his favorite patriotic shirts for another couple of years at least. 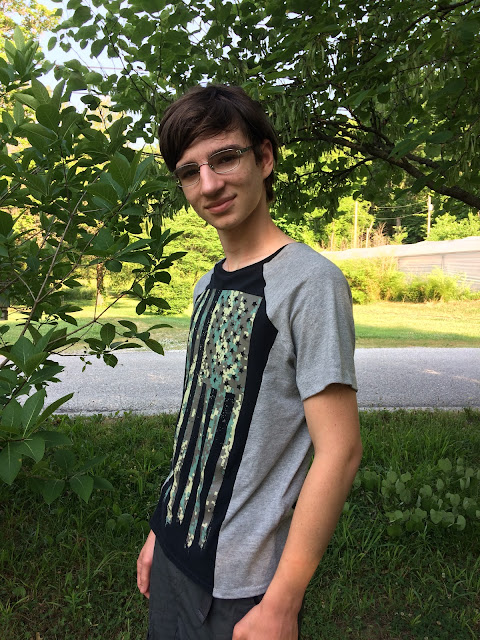 That is, unless he hits another growth spurt soon, as teenage boys are apt to do. Well, even if/when that happens, I can still rest easy knowing I extended the life of his favorite shirts a little bit. 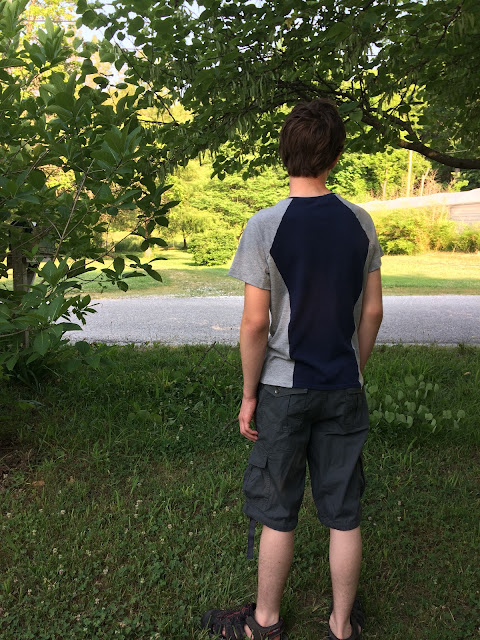 And a little bit is better than none at all! 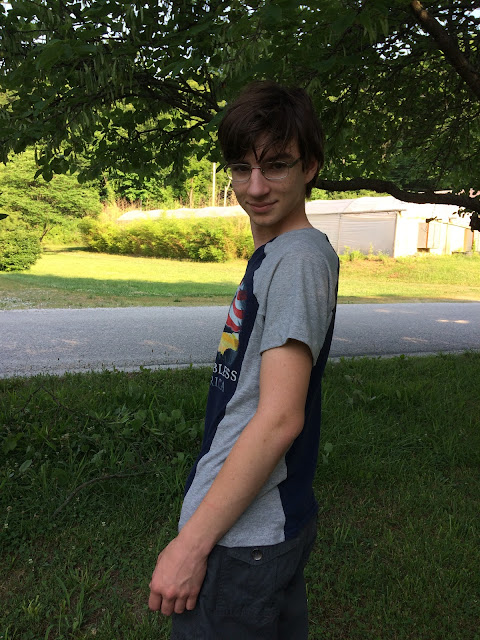