The past two weeks have been insane. Costuming a children's play, while working full time, and also testing 3 different patterns at the same time is insane. Oh, and my last two goats decided to kid as well. I think I lost my mind - but hey, my sister got a rabbit costume out of the deal! (And I got 2 new baby goats, 3 new shirts, a new skirt, a new dress, and almost no sleep, but that's another story.) 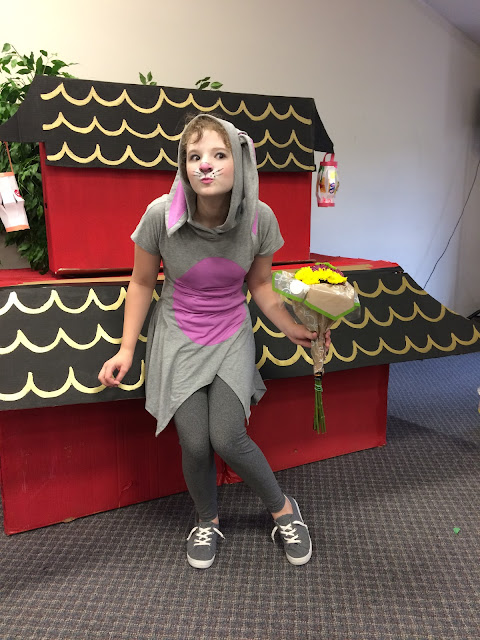 Anyway, on to the costumes! The wonderful woman who has been directing the homeschool group plays for the past 10 years decided to do a children's theater camp this summer! For two weeks 25 kids would come to an all-day camp where they would play games, make crafts, have fun, and produce a play. This all culminated on Saturday when the kids preformed "The Legend of Mulan" for an audience. 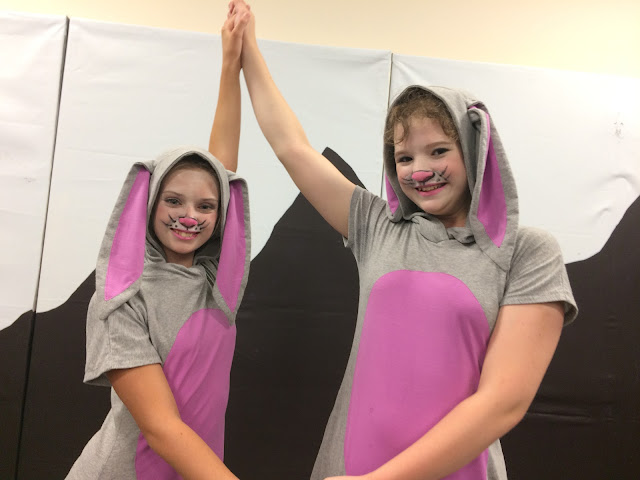 Soon after deciding to do this children's play, the director approached me about costuming it, and I eagerly agreed! (Forgetting at the time that I would be working full time when summer rolled around.) So, at the end of May, auditions took place and the play was cast. The following week I began sewing costumes and theater camp commenced. In two weeks I would costume the 25 kids in an assortment of kimonos, tunics, and animal costumes. The animal costumes were by far my favorites as with those I could let my imagination run wild! 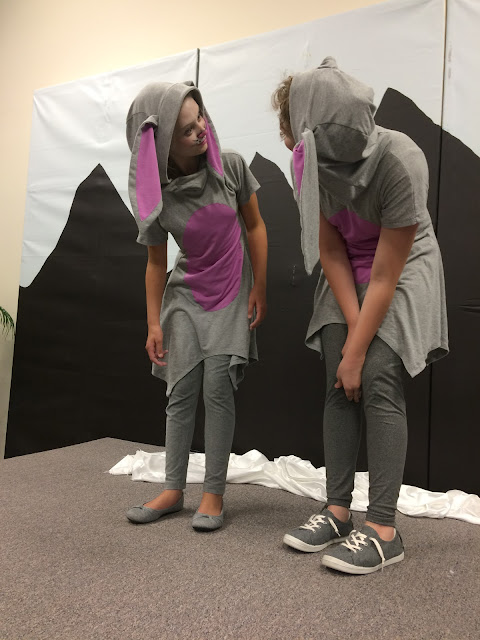 My sister and her friend were cast as rabbits in the play, and their costumes were surprisingly easy to make! (Which is good because I had less than one night to sew them!) 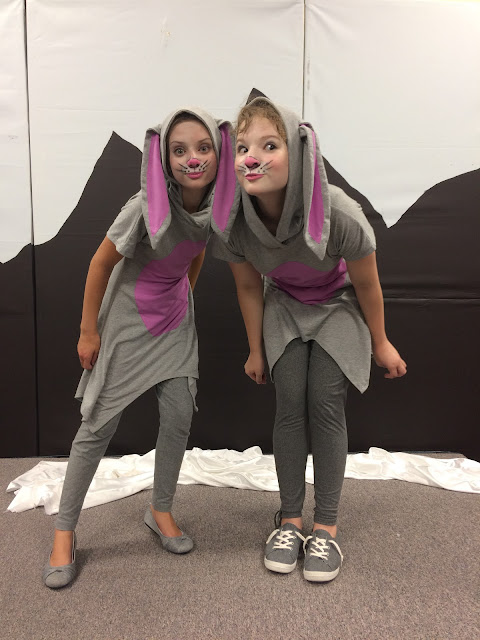 I decided to use the Beltaine Fires Tunic pattern as my base and add a belly, hood, and ears to make it look rabbit-y. As I just tested this pattern a month ago, and made several tunics from it, I knew the pattern would be a quick sew - even with the fun costume additions! 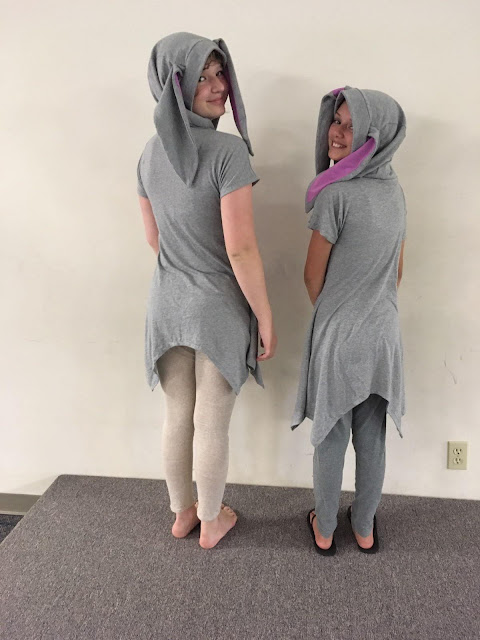 I used a gray cotton jersey knit sheet as the main fabric for the costume base. The tunic front and back were each cut as one solid piece with a hanky hem and no waistband, color blocking, or pockets. The front neckline was cut extra high, almost as high as the back neckline, to accommodate a hood. 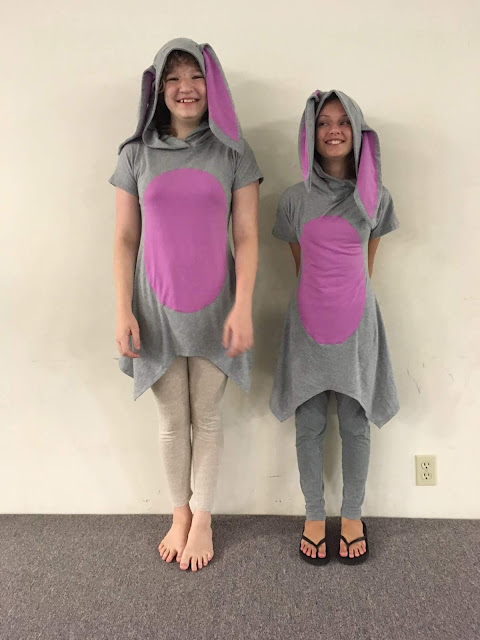 The hood was made using Burda 6406. I added a front band to the otherwise basic 3 piece hood pattern so it would accomodate rabbit ears. 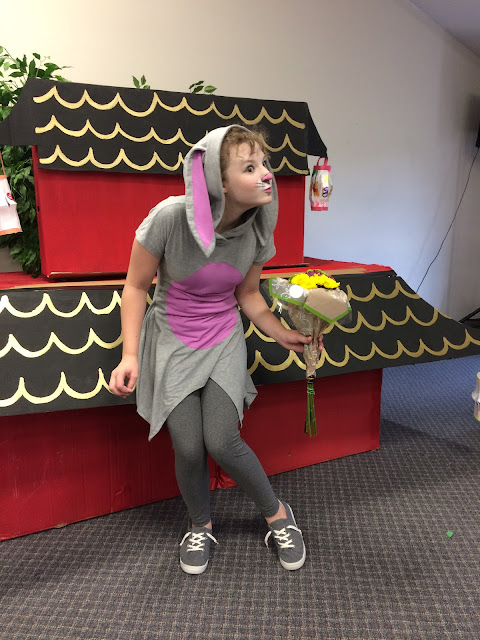 I self-drafted the ear and belly pieces and made those from a pink lycra-type fabric I found at Goodwill. 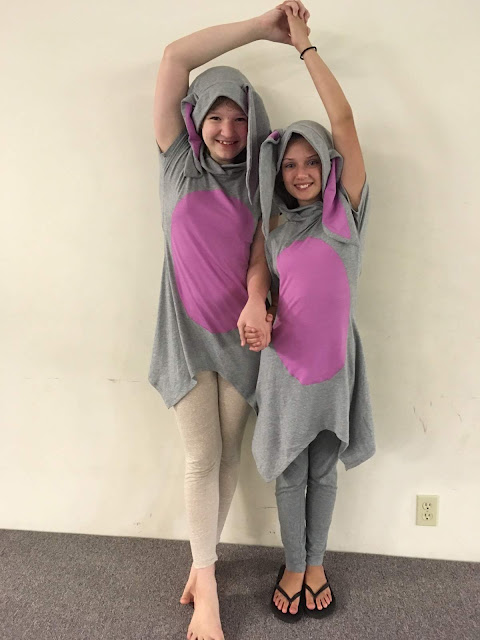 The rabbit costumes were surprising quick to make and looked absolutely fabulous on stage Saturday afternoon. Both girls hoppity-hopped across the stage and delivered their lines perfectly! 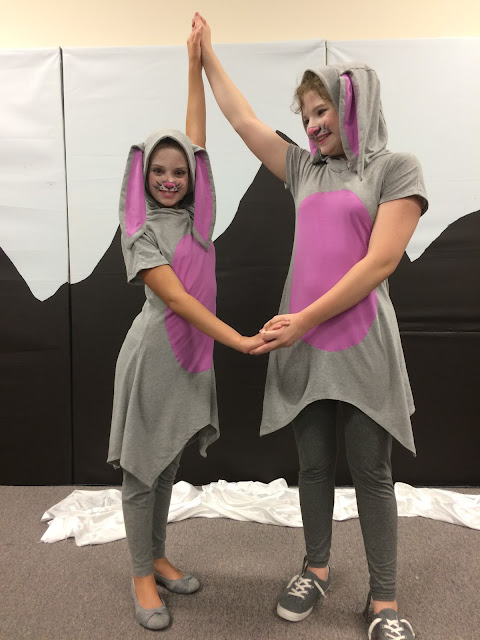 What good bunny rabbits these girls made! And designing their costumes was a ton of fun - even with a limited time frame!