Kittens and the Phoebe Pinny

The best garments have pockets large enough to carry kittens in. 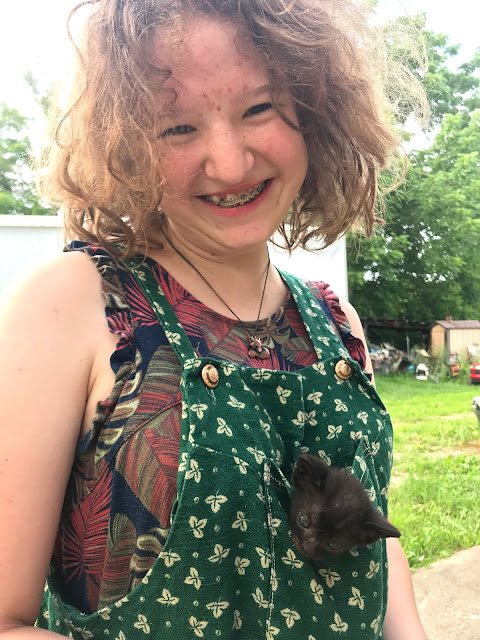 With the birth of  a litter of kittens in our hay loft several weeks ago, and the subsequent loving on kittens which was required once the kittens were older and ready to play, my sister discovered she had just such a garment in her closet. 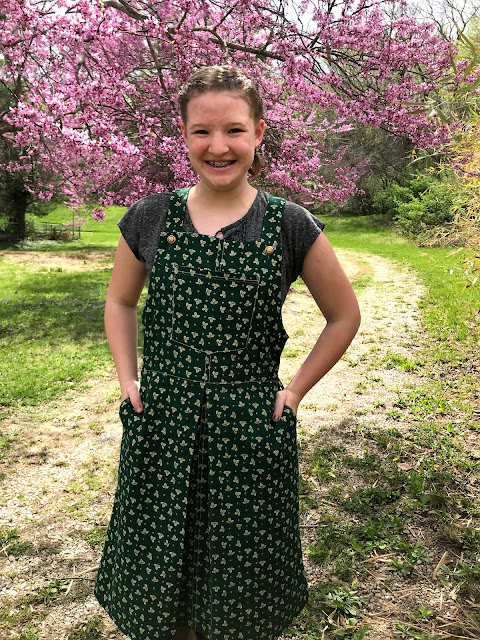 The overall dress I made my sister this spring, features the most wonderfully large front bib pocket. The perfect place to carry a kitten as one goes about her daily chores! 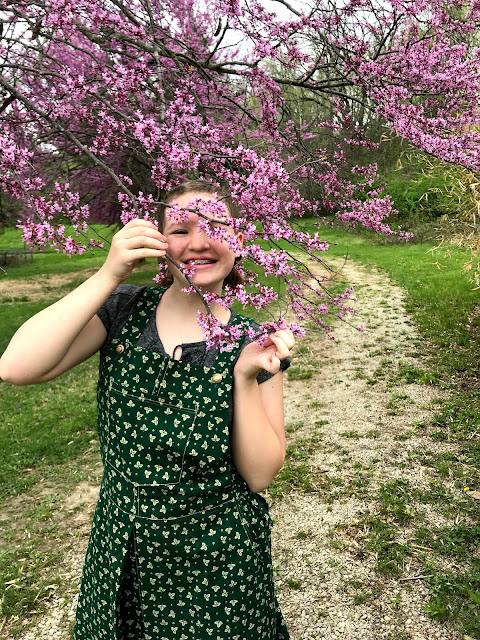 The pattern I used for this lovely kitten-carting garment is the Phoebe Pinny, by Pattern Union. This is the dress version of the Phoebe Bib&Tucker pattern, which I tested back in March. 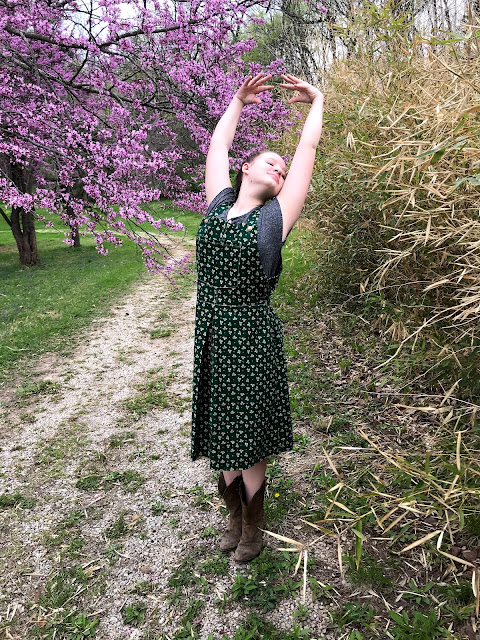 A week or two after the overall pattern testing wrapped up, the pattern designer emailed me to see if I'd like to test the dress version of the design as well. My sister seemed willing to have a dress version of the pattern made for her, so I quickly agreed. As my sister had already requested her next pair of overalls be green, I applied that request to this dress, and picked out a green heavy cotton, with a gold leaf print, from my stash. 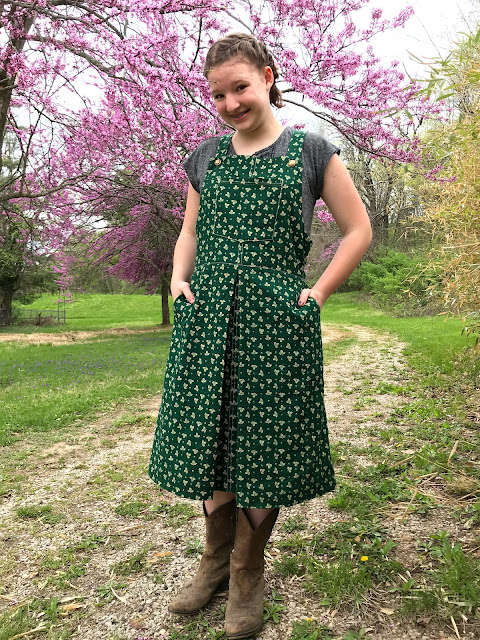 When it came time to make the dress, there was only one slight stylistic issue - the skirt portion of the pattern was relatively straight, and my sister and I tend to avoid straight-ish skirts. You just can't move in them the way you can move in full skirts. When we wear skirts, we like to be able to be just as active as we are in pants - so full (ish) skirts all the way!! 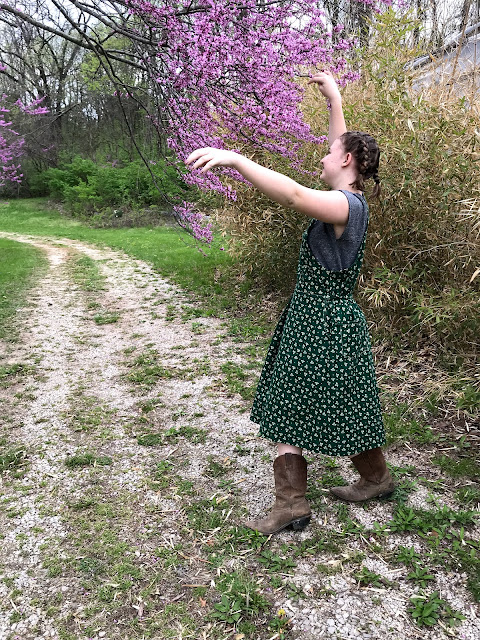 With this in mind, I asked the designer if I could hack the skirt portion of the pattern to be a little fuller, featuring center front and back box pleats. She loved the idea, as she likes for her patterns to be "hack friendly" and that is reflective in her testing process. The more you can hack a pattern, the more it will be used! Thus, along with making the skirt a little extra full, I also cut the length half way in between the two skirt lengths included in the patter - above knee, and midi length. My sister's dress is just below knee length. 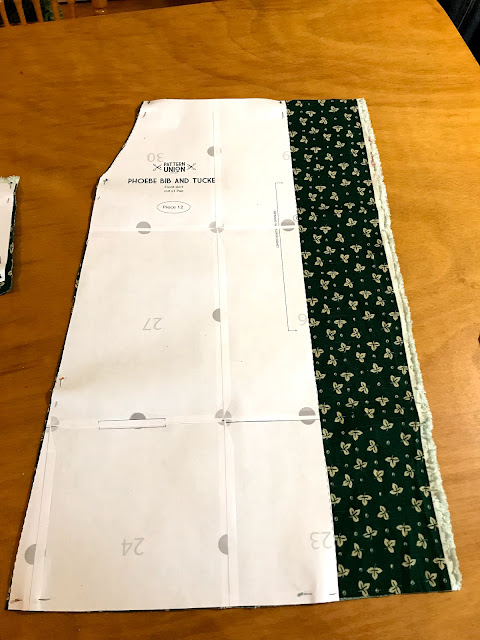 To accommodate the box pleat idea, I added an extra 5" (or so) to the center edge of both the front and back skirt pieces. 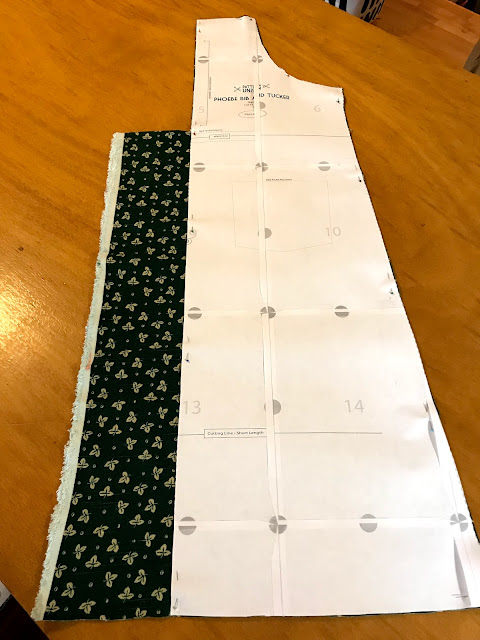 The center seams were then sewn up like normal, and the excess fabric was pleated at the waist before the skirt was sewn to the bodice. 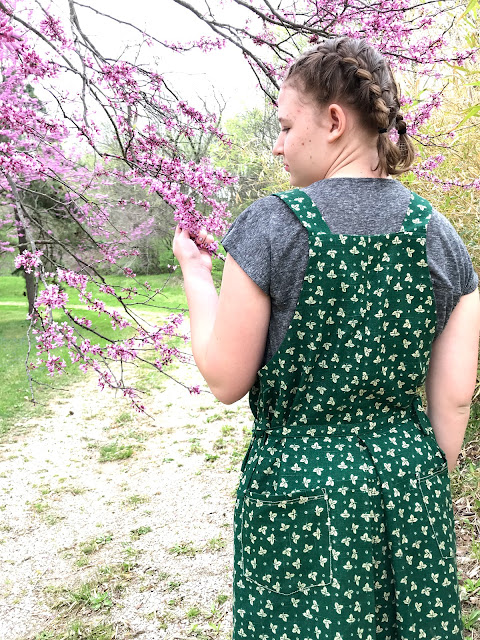 This worked like a dream, and the pleats turned out exactly as I'd envisioned! I think the box pleats suit the overall-style dress very well. 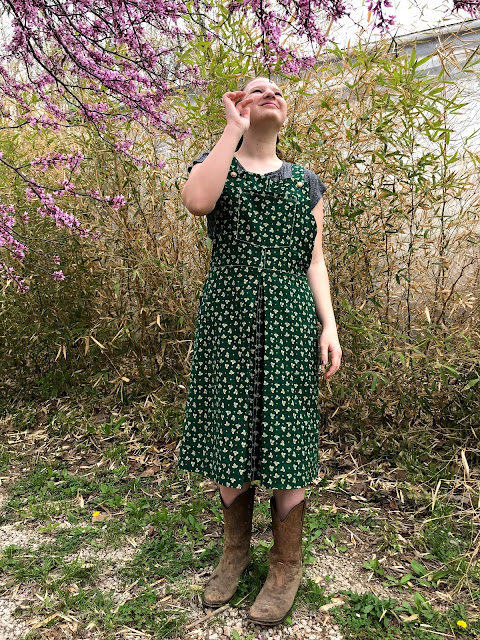 For a little extra shaping, this pattern has side ties to cinch the dress in a bit at the waist. This detail was thought up by one of the Phoebe Bib&Tucker testers, and I love the way the designer applied it to the dress! 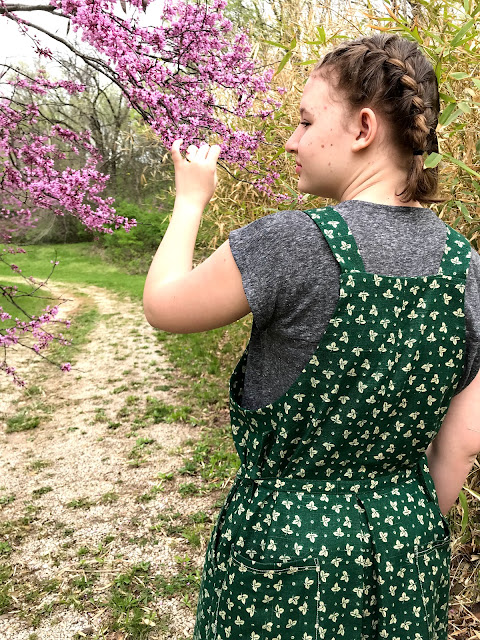 Not only do these ties add nice shaping, they also make the fit very adjustable - always a good thing. 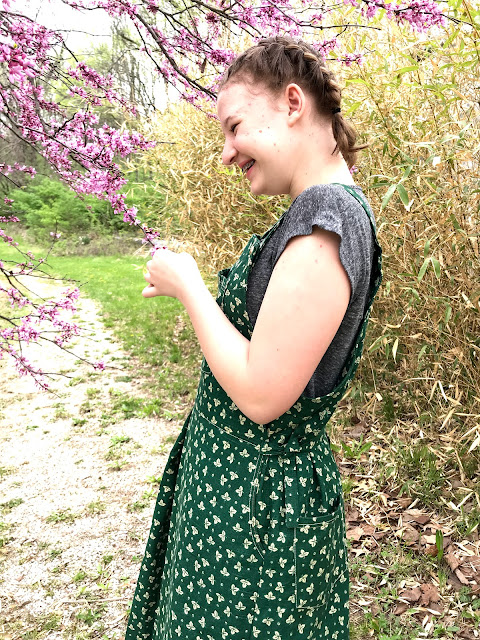 The shoulder straps fasten with gold buttons on the front bib - my sister's choice, which I think matches the goldish-tan leaves and top stitching on this dress beautifully. 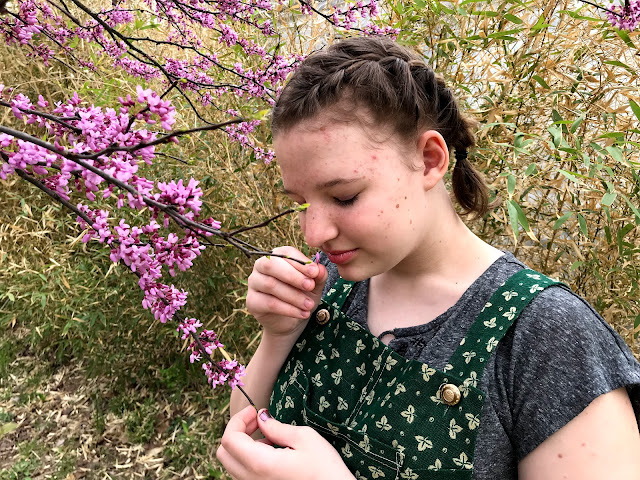 Just like with the Phoebe Bib&Tucker, the bust darts on the bib give a beautiful fit to this dress - and the pattern includes different front bib pattern pieces for different cup sizes! Patterns that include cup options are my favorite! 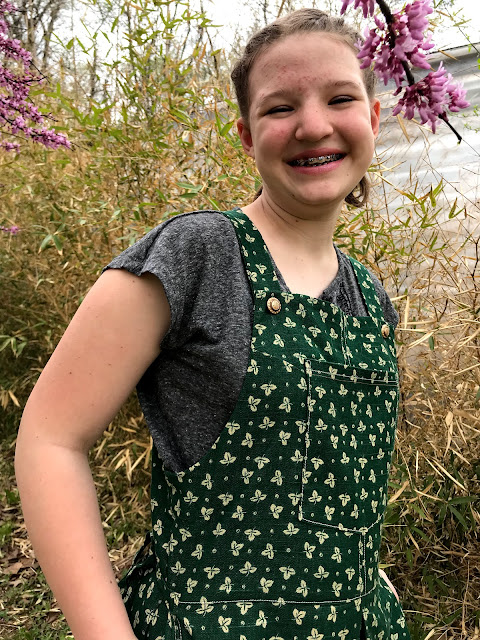 Testing this pattern was enjoyable, and seeing my sister wear the dress regularly in the months since completion has been even better! 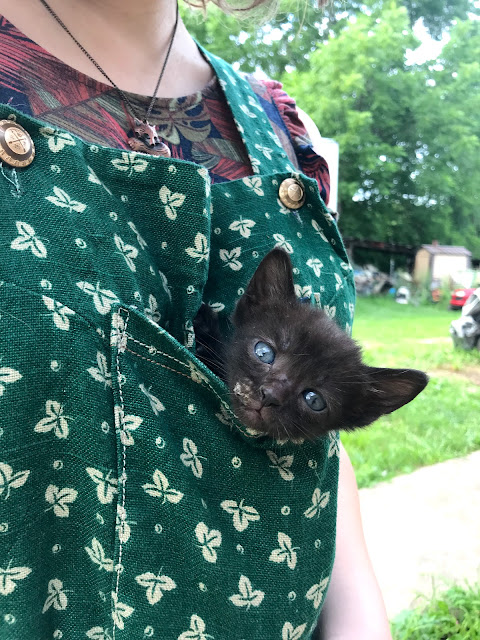 I had no idea I was making a kitten-carrying dress when I made it, but the front bib pocket is perfect for that purpose! My sister just can't carry more than one kitten in her pocket at a time, otherwise the mama cat gets a little nervous. 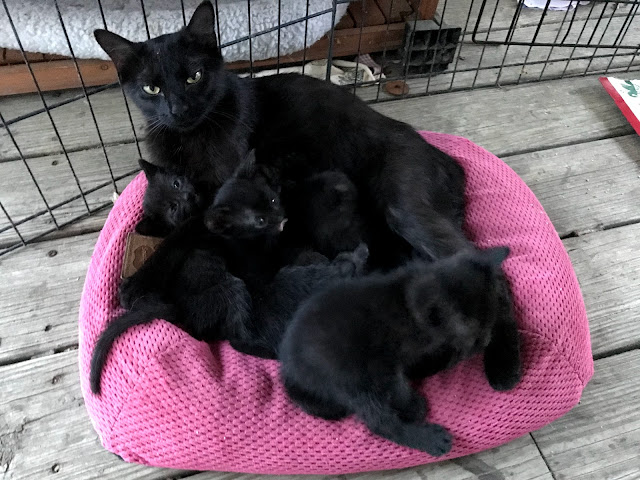 Our little Licorice is proving to be a wonderful, attentive, mama. Willing to share her babies with us as long as we don't borrow too many at one time! 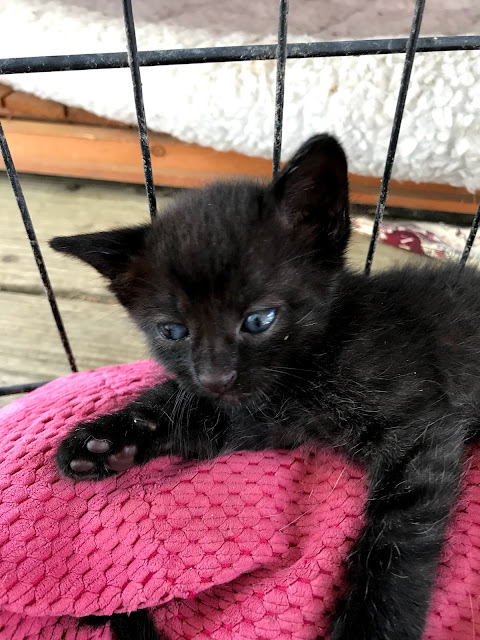 Aren't these babies the cutest things?!?! 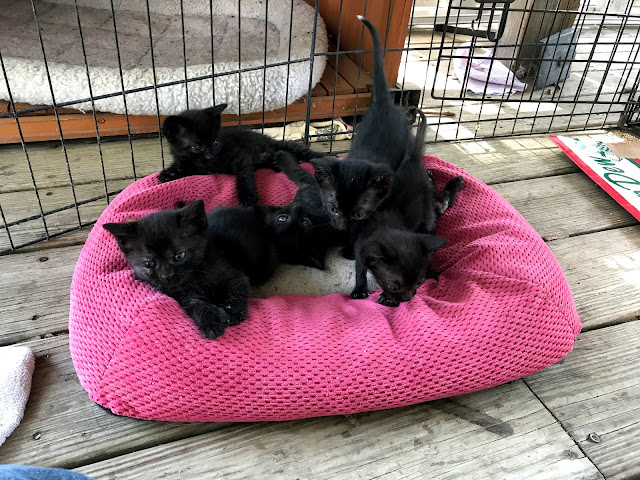