Mary Queen of Smocks (How I Began My 16th Century Ensemble)

For my Renaissance Festival outfit this year I had grand plans of just picking a costume pattern I liked and making myself a pretty vaguely historical-ish dress, mixed with a dash of fantasy-ish, and princess-yness. Historical Accuracy and the Renaissance Festival honestly don't even know each other. The Ren Fest is a fantasy-ish type of event, mixed with a dash of vaguely historical-ishness. There would be no need for me to fall into the pit of somewhat obsessively researching the clothing of the era before sewing a single seam for my costume for this event. No need at all. 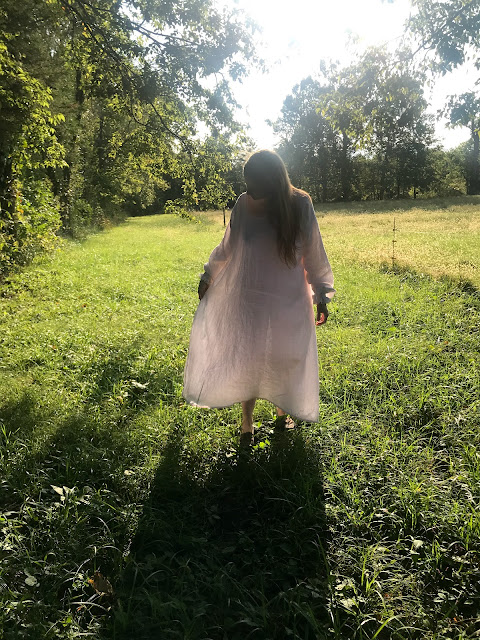 And yet. . . even with this decision made before I began anything. . . once Erentry and I started talking about what we would actually wear to the Ren Fest, the historical costumer in me took over. All intentions of "quick, easy, fun, fantasy-ish, not historically accurate at all" flew out the window. I pulled out books. I started googling. I ordered more books. I ordered 6 yards of linen. I looking at paintings from the 16th century online. I read 16th century re-enactors blogs. I starting reading my new books as soon as they arrived in the mail. I made lists of all the different elements my costume needed. And I had to talk myself out of hand sewing everything. 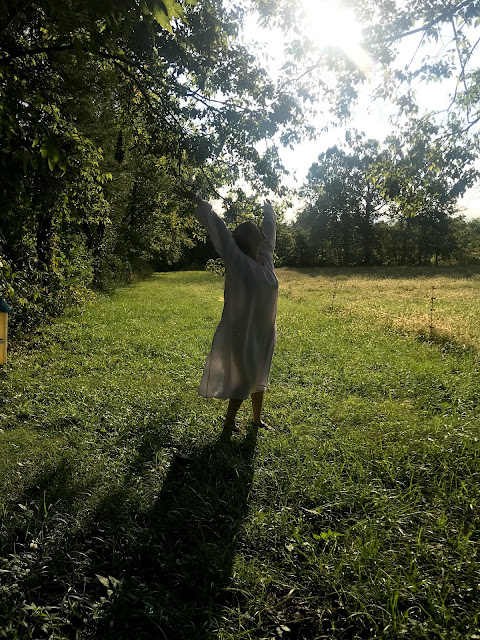 Now the Renaissance era is a good 300 years earlier than my standard costuming era (Victorian), and 200 years earlier than the earliest I'd gone with my historical costuming thus far (Georgian). Thus, this was new, uncharted territory for me, and my costuming library, which I've been building up over the last few years, was sadly lacking in books to help me on my way. I owned one book featuring clothing from earlier than 1600 - Patterns of Fashion 4, by Janet Arnold. So, as mentioned above, I ordered a couple more books, then dove into the pages of Patterns of Fashion 4 (PoF4, from here on out) while waiting for the rest of the books to arrive in the mail. 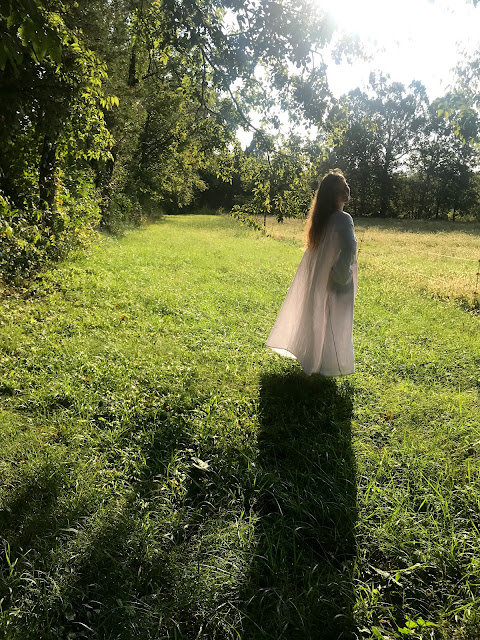 Now PoF4 is all about the linen clothing items of 1540 through 1660 - shirts and smocks (The under garments, worn beneath all other clothing) and ruffs, and coifs, with a few other accessories thrown in. I began reading it July and learned a whole lot about linen garments and their construction in the second half of the 16th century. Soon I knew the first thing I needed to make for my Renaissance ensemble was a linen smock (what is known as a shift or chemise in later eras) to wear underneath everything else. 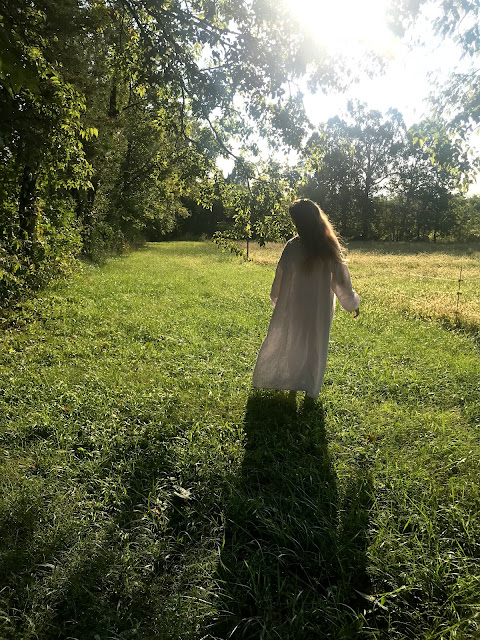 Looking through PoF4, I fell completely in love with the "Mary Queen of Scots" smock (Photographs found on page 57, pattern found on page 115). With cutwork lace and very full sleeves, this smock was definitely more high-class than what I intended my other garments for this ensemble to be, but it made me happy. As mentioned earlier, historical accuracy is not a top priority for the Ren Fest (so wearing a fancy late 16th century smock with a basic wool gown from the early 16th century would be permissible in this instance). Thus, the "Mary Queen of Scots" smock I would make! Those incredibly full sleeves were too delightful to resist. 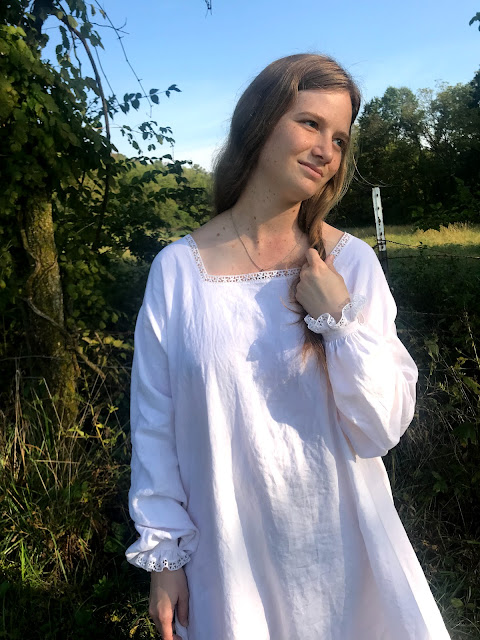 I cut my linen (pale pink due to a laundry incident) into squares, rectangles, and triangles according to the pattern diagram in the book. I cut out the neckline with my rotary cutter, which proved to be a mistake, as I accidentally cut a bit too far on one side while cutting the back neckline. So, I had to patch that before I could even begin constructing the smock in earnest. At least it was the back neckline, not the front neckline. 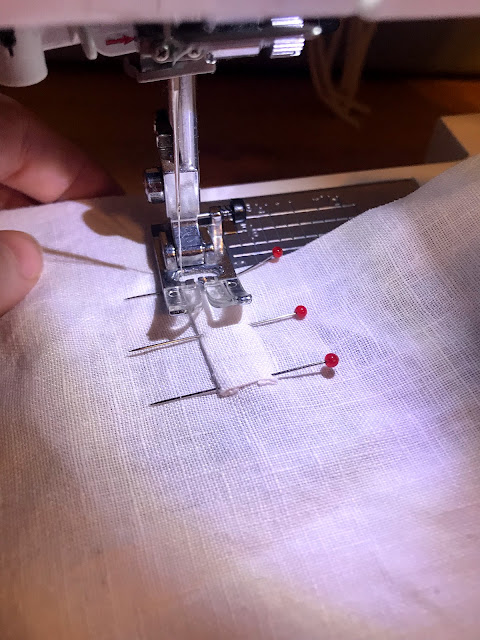 Crisis solved, next I picked out what lace I would apply to my smock. Lace which would be historically accurate to this era does not exist anymore (unless you make it yourself I suppose, but that is not in my realm of expertise). Honestly, the most historically accurate option probably would have been to skip the lace entirely, but the lace trimmed neckline and sleeve ruffles were one of the things I loved about the original smock, so my smock would have lace. I went through my lace stash and picked a daisy lace to use. 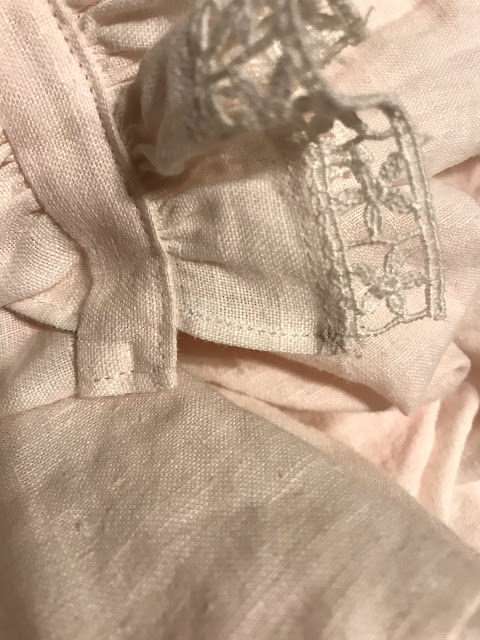 The square shape of the motifs reminded me of the lace on the original, so I decided it would evoke the right feel, even though it wasn't historically accurate. 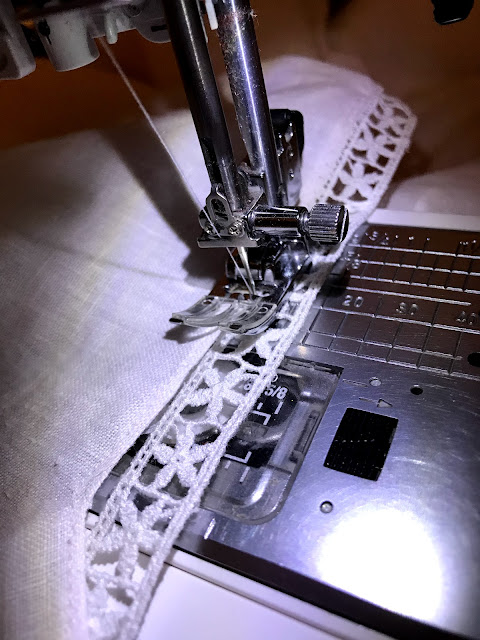 I narrowly hemmed the edges I wanted to attach the lace to, then sewed the lace on with a zig-zag stitch. 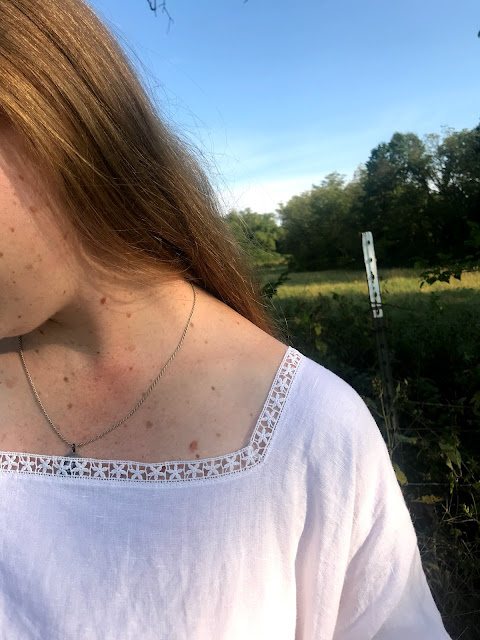 Around the neckline and onto the sleeve ruffles the lace went! 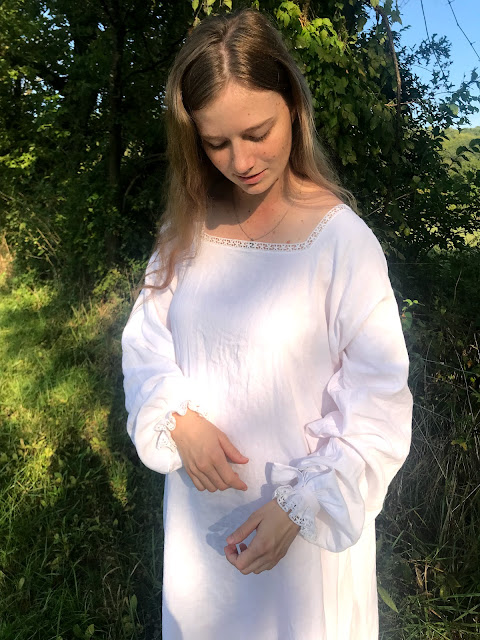 The remainder of the smock was constructed with flat-felled seams - all on the sewing machine. 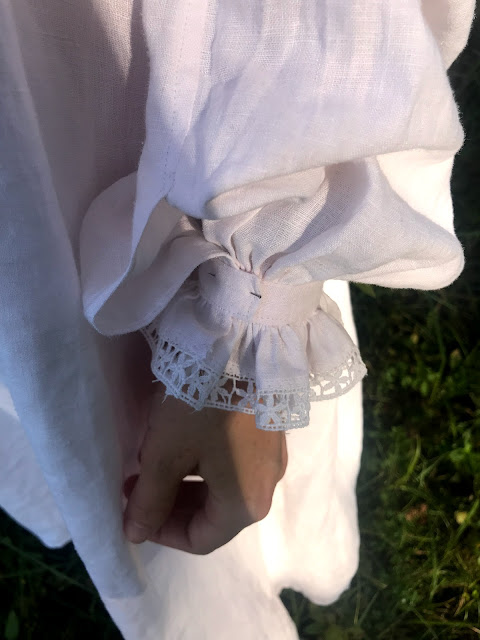 The sleeves and sleeve ruffles were tightly gathered into a narrow band at the wrist. This band pins closed, which would be this historically accurate fastening choice. 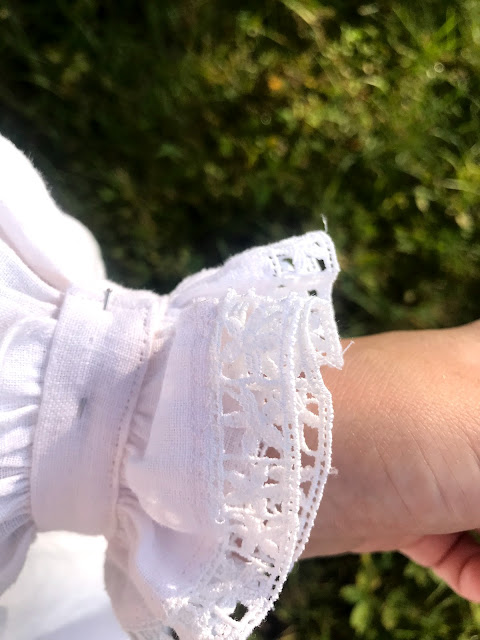 The finished smock feels quite luxurious to wear! Almost queenly, one might say. 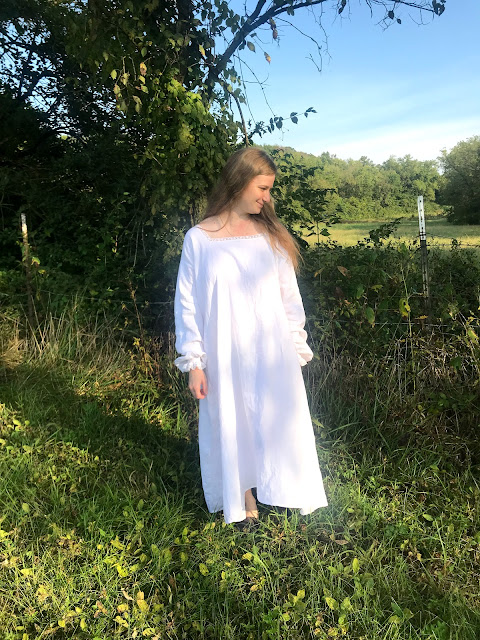 Full and flow-y with puffy sleeves! 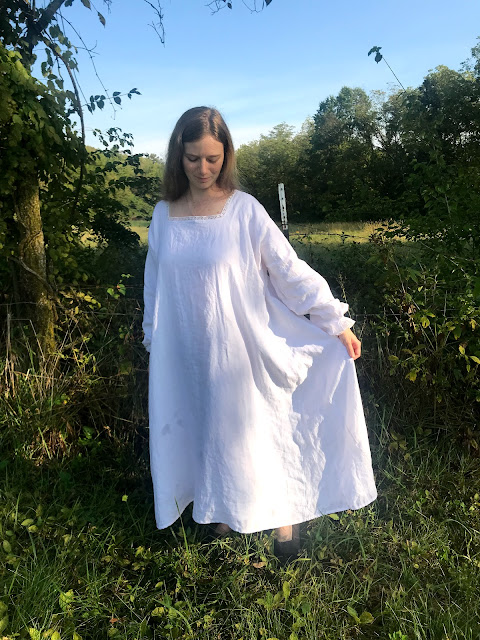 When my sister saw me wearing it she said it reminded her of a ghost. 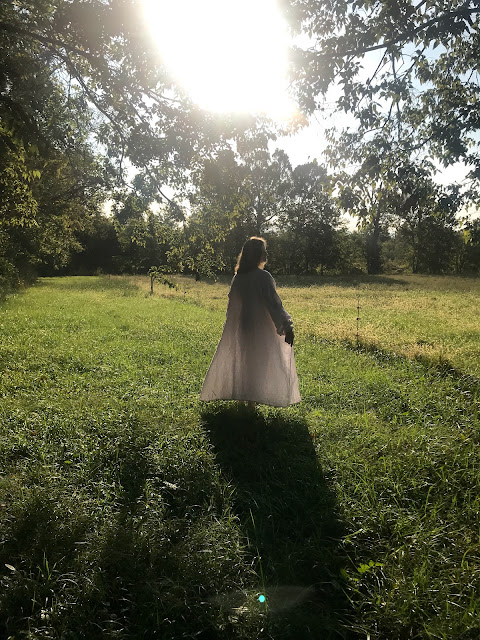 Thus, when we went out to take pictures one morning last week we had to play with the light for a more ghost-ish effect! 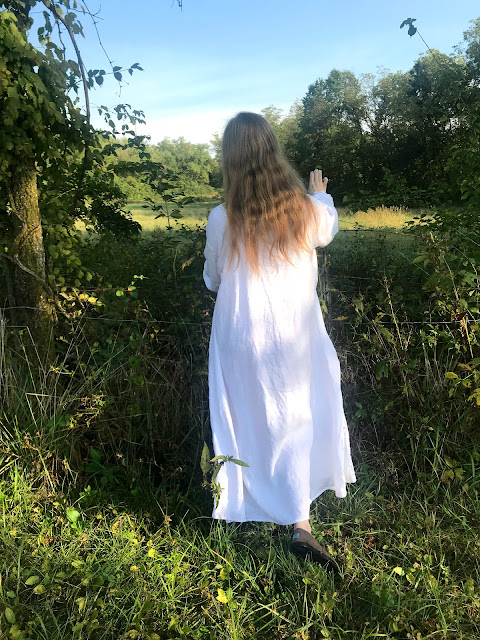 Ghost-ish or not, I'm very pleased I fell down the historical costuming rabbit hole for my Ren Fest outfit and made this smock! 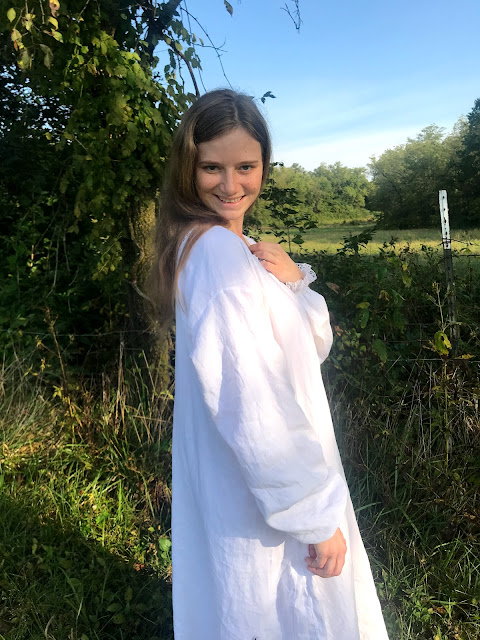 The puffy sleeves and lace make it a fabulously splendid garment to own, and I plan on using it in daily life as a nightgown, as it's too fantastic not to wear regularly! 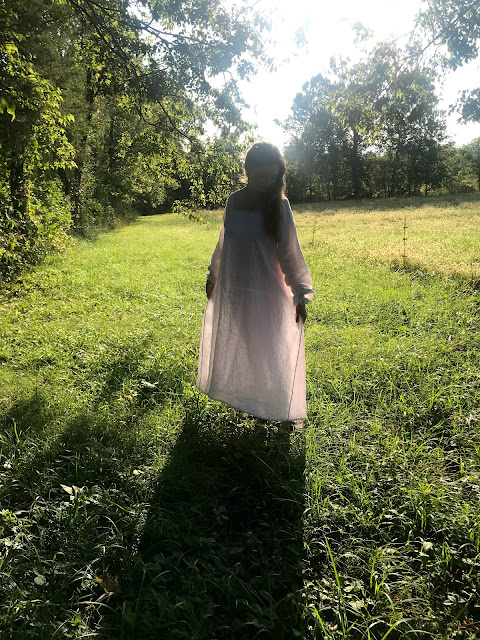 What the item is: Renaissance Smock
How it fits the challenge: Smocks were the base layer which got worn every day underneath all the other garments.
Material: Linen
Pattern: The "Mary Queen of Scots" smock from Patterns of Fashion 4, by Janet Arnold.
Year: 1560's - 1580's

How historically accurate is it? The pattern is accurate, as is the fiber content of the material. It's all machine sewn however, so that's not accurate. Also the lace around the neckline and cuffs is modern, nothing like the cut work lace on the original. So, all in all, maybe 6/10

Hours to complete: 5 or 6 I think, gathering the sleeves into cuffs and attaching the lace took a while.

First worn: 9/29/19 for the Renaissance Festival

Total cost: The linen was $8 a yard and this took 3 yards. I got the lace for free. Add a dollar for the thread used for a total of $25