It has been 4 years since I last attended the Renaissance Festival. And that is a shame as this annual event is a fabulous, awesomely fun, excuse to dress up.  Over the summer, Erentry and I decided we would absolutely be attending the Ren Fest this year - and we were going to make ourselves some fantastic new renaissance clothing for the occasion. Our outfits last time turned out fine for something we threw together last minute, but this year we were going in prepared, so we would do even better! 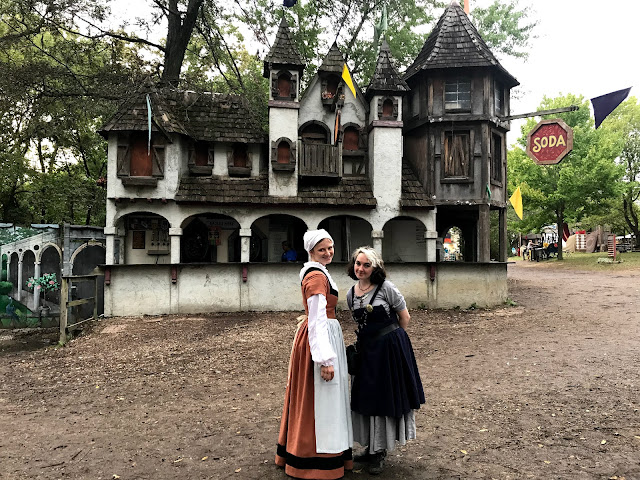 That said, even with planning everything months beforehand, we still each finished our outfits the night before we planned to go to the festival. We might be chronic procrastinators. . . 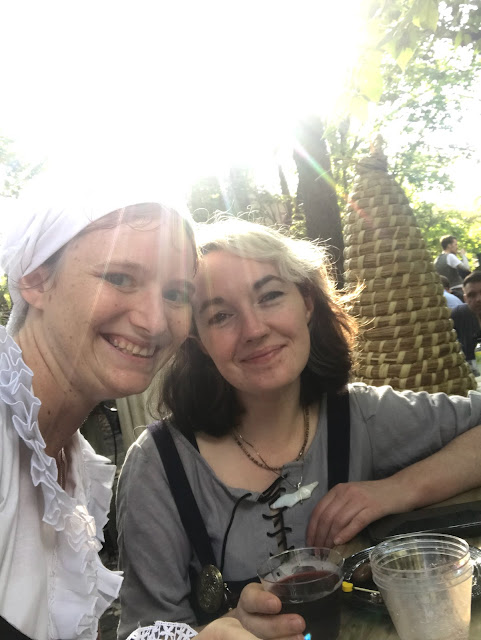 We did get our outfits done however, and that was the main thing! Erentry choose to go as a Viking. She drafted the side lacing apron pattern herself and I draped the pattern for the linen kirtle directly on her. 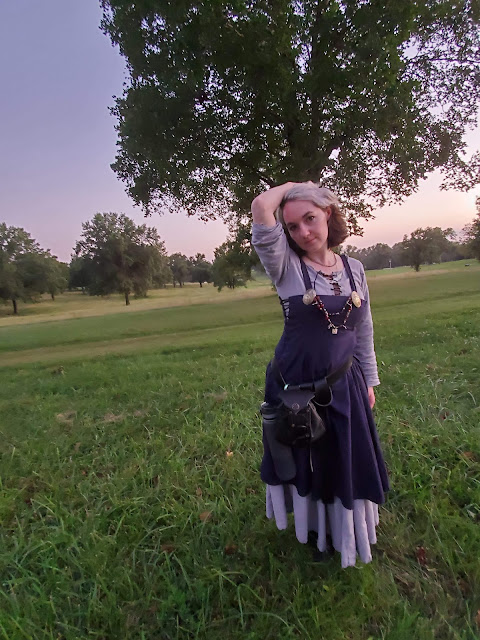 I attempted 16th century German for myself in an orange wool gown (made from an altered McCall's pattern, I'll blog it in more detail later), with accessories and undergarments made based on patterns in books. (Yes, I am wearing my Regency chemisette with this gown!) 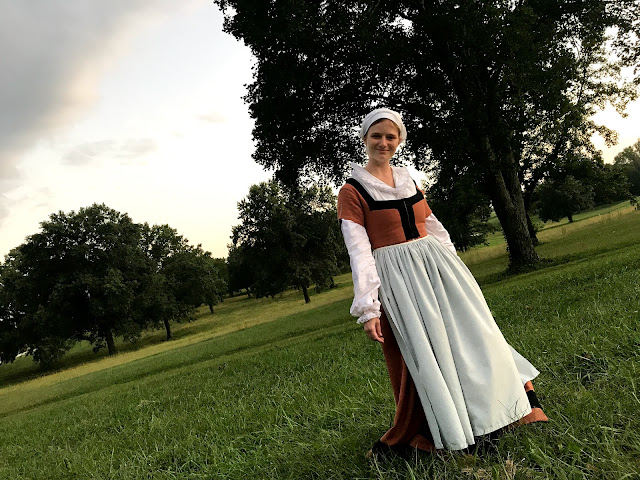 Possibly due to the fact we were tired from sewing late the night before, we got a later start than we intended to Sunday morning, but after filling up with gas, we were off! 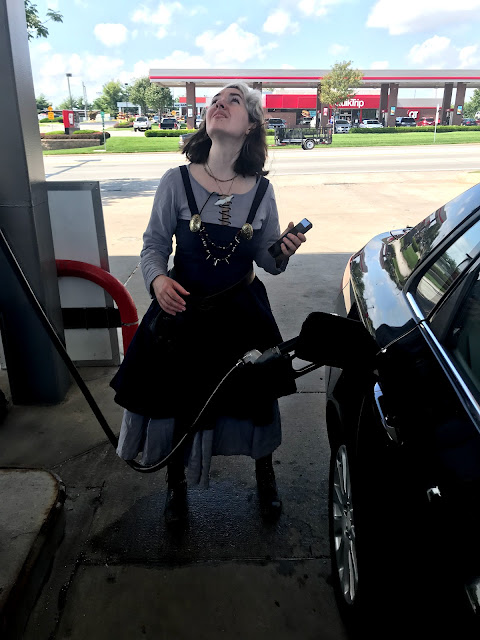 And before too long we had arrived! 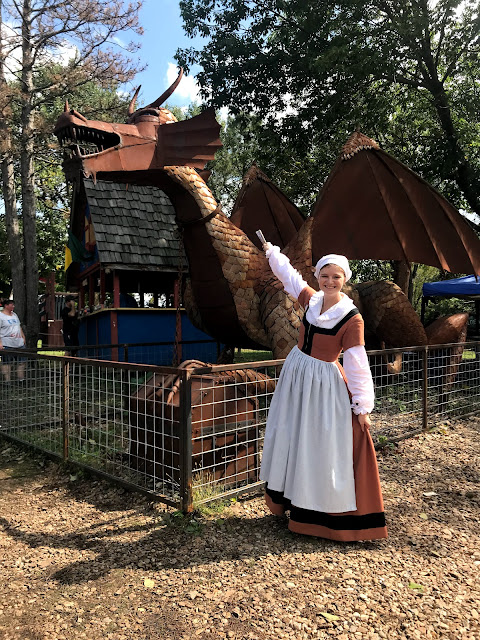 A large metal dragon greeted us at the entrance, so a quick picture with it seemed a fitting way to start the day. 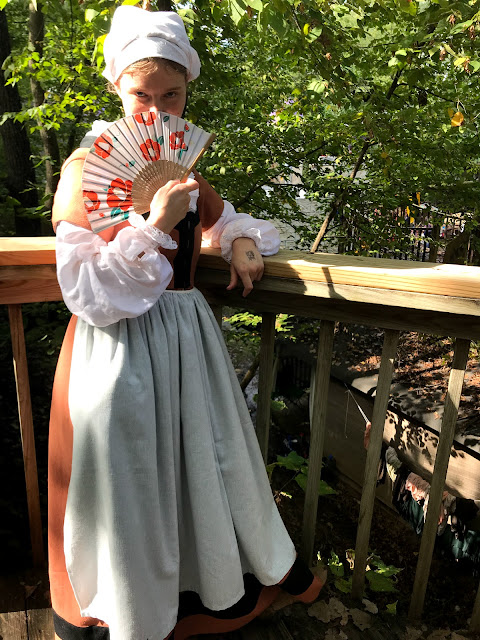 We were hopeful the weather would be reasonably cool as it was the very end of September, and supposedly fall is supposed to arrive around then. Fall did not arrive in time. It was hot! Thankfully, I had two fans, which I picked up on my trip to Japan back in June, buried deep in my purse. We carried those fans with us all day, and greatly appreciated their existence! 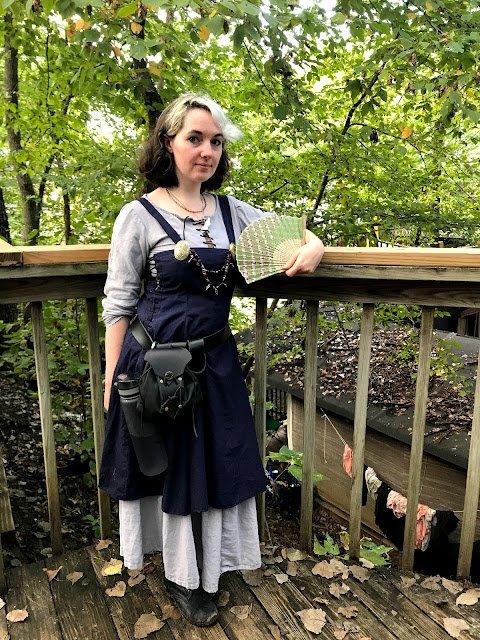 Thus, equipped with our personal cooling devices, we set forth to enjoy the fair! We wandered through vendor shops, admired the wares, and picked out a few items to take home. We found the historic craft demonstration and chatted with the ladies there about weaving and lucet cord making for over an hour. We left the weavers with a lucet cord fork apiece and a strong desire to take a weaving class together sometime.

I would say talking with the weavers was my favorite part of the day, but honestly, I enjoyed the entire day immensely and don't believe I can pick a favorite activity! Upon leaving the weavers, we stopped at the blacksmiths' shop, watched a blacksmith work and got a bit of a lesson on blacksmithing as a trade throughout history. This was followed by a bit more wandering around before we found ourselves at the mead tasting event. 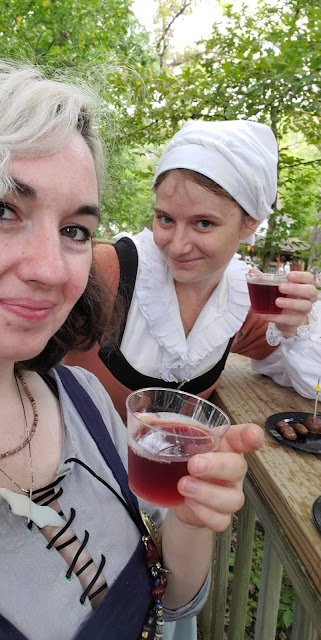 I'd never had mead before, but all 4 varieties we got to sample were very good! 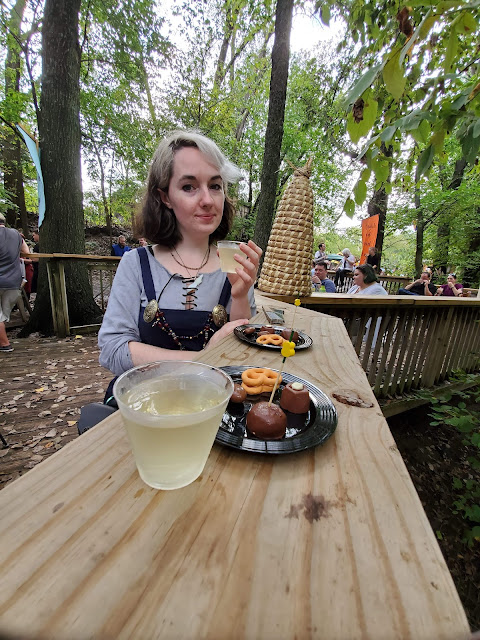 We were given chocolate to go with our mead, something we absolutely did not complain about! 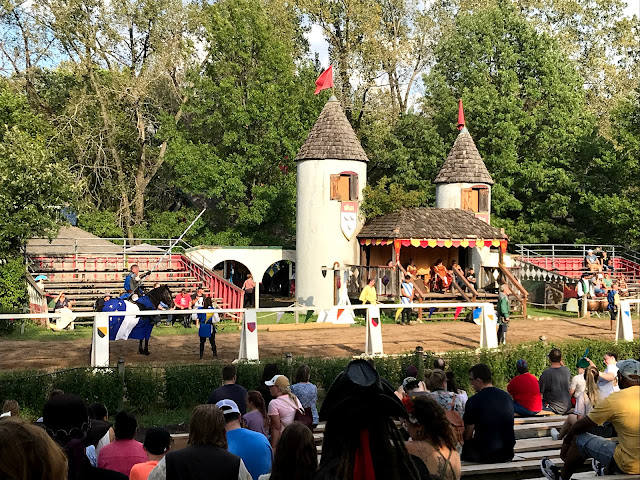 After finishing our mead and chocolate, we sat down to watch a jousting match. The guy falling off his horse was very clearly staged, but can you actually say you've been to the Ren Fest if you didn't see any jousting? 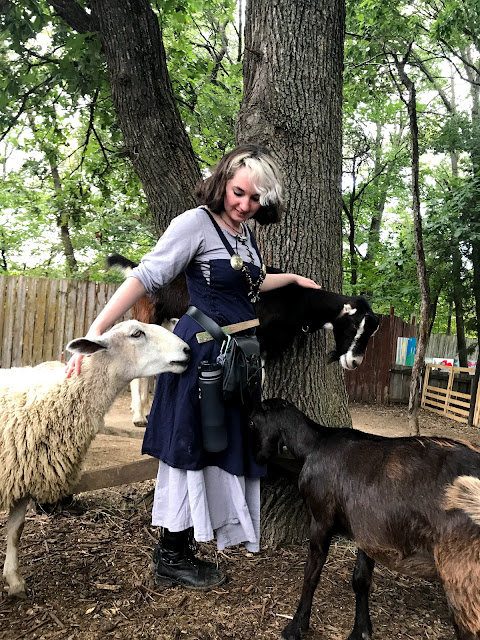 We wrapped up our day with a visit to the petting zoo - because, if there are goats, I must see them! Thankfully, Erentry was of the same opinion. 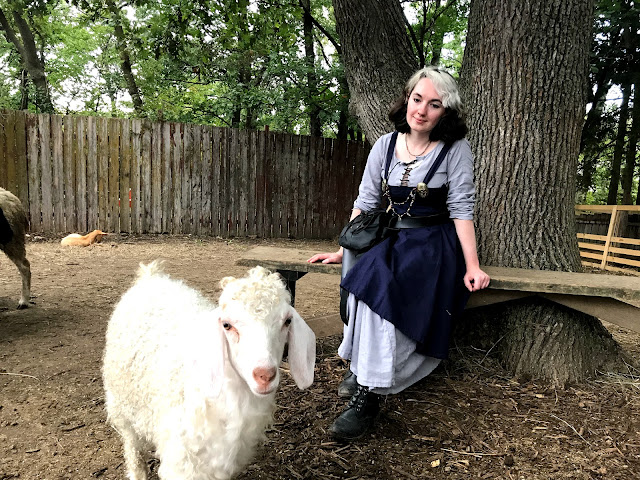 I found this little Angora goat to be the prettiest thing! Maybe I should add a fiber goat to my herd. . . 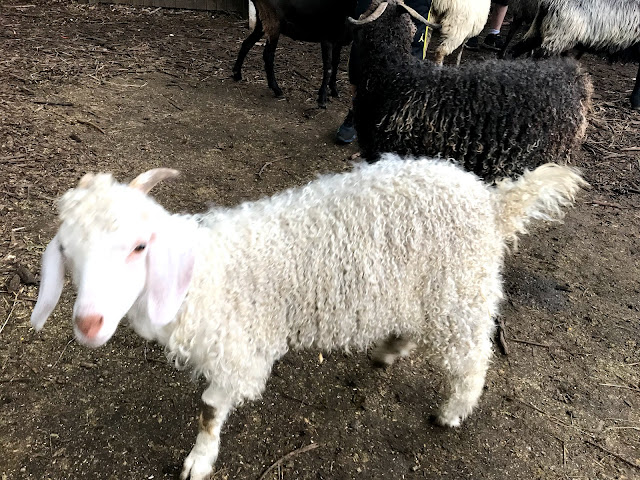 Look at those ringlets of mohair! 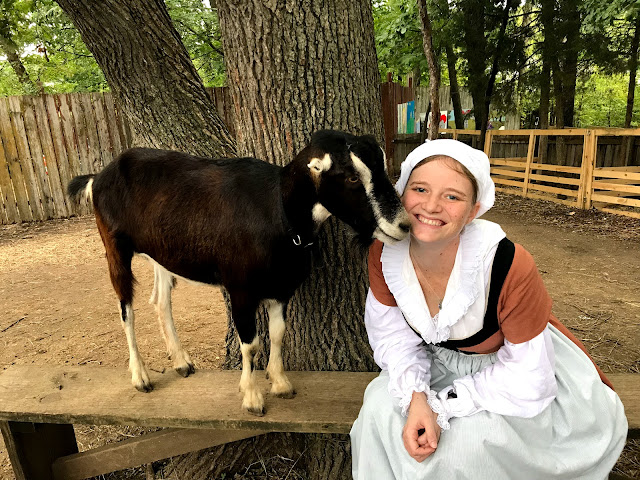 There was something delightful about hanging out in a goat pen in historical clothing! 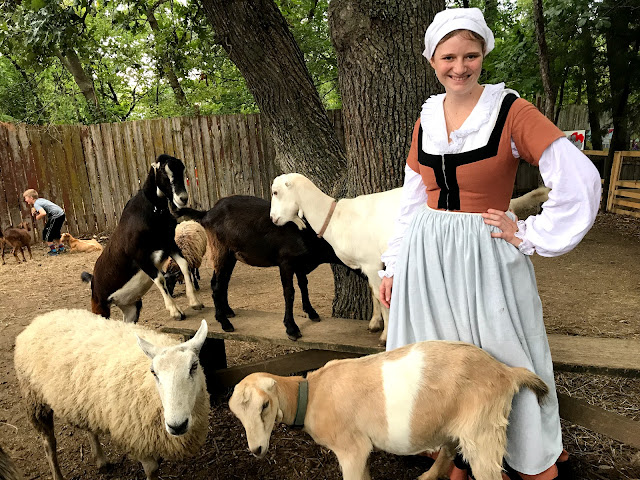 We lavished attention on the goats and sheep until leaving to finish up the shopping we'd put off until the very end and stopping to talk with the weavers just a little bit more before heading out. 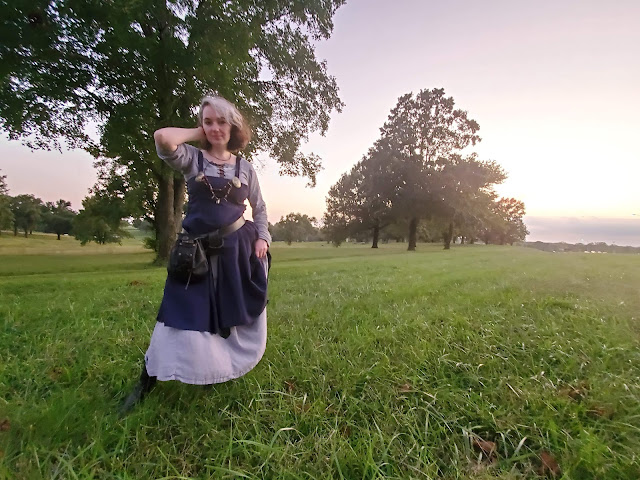 We stopped at a nearby park to get pictures of each other in the sunset, then it was on the road for home. 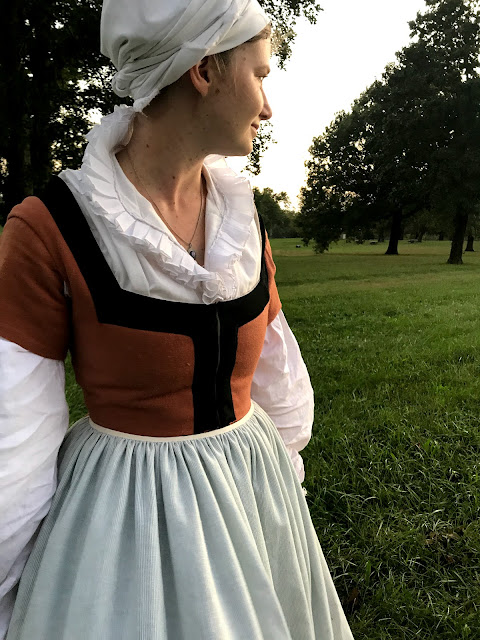 We left very pleased with the day as a whole, and more than a little pleased with ourselves for how well this year's outfits had turned out! 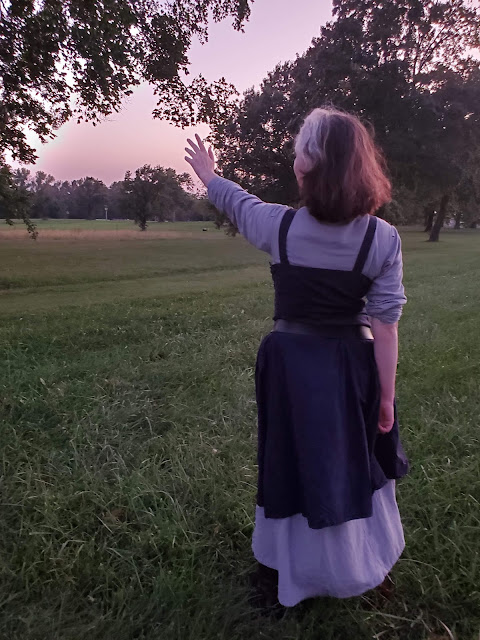