The Chemisette With A Box-Pleated Ruffle

As I was making all the regency dress accessories I could manage for my sister's birthday party, I decided to make a chemisette to fill in the neckline of my gown. 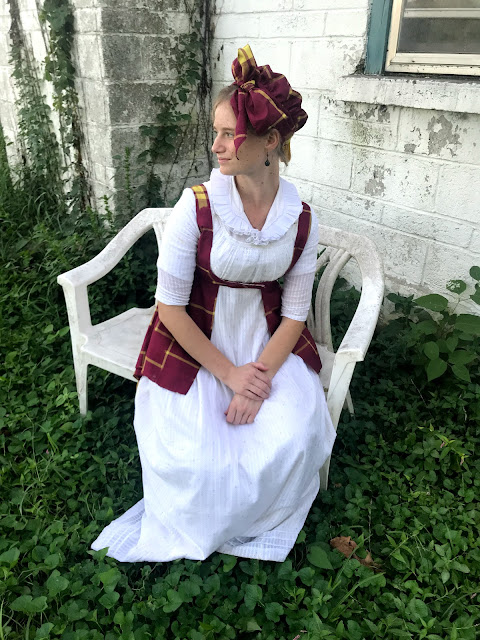 What is a chemisette? It's more or less a faux shirt worn underneath gowns and jackets from the 1790's through the Victorian era to fill in low necklines, or just give the illusion of a shirt worn under a high necked jacket. Basically what was known as a "dickie" in the 20th century. 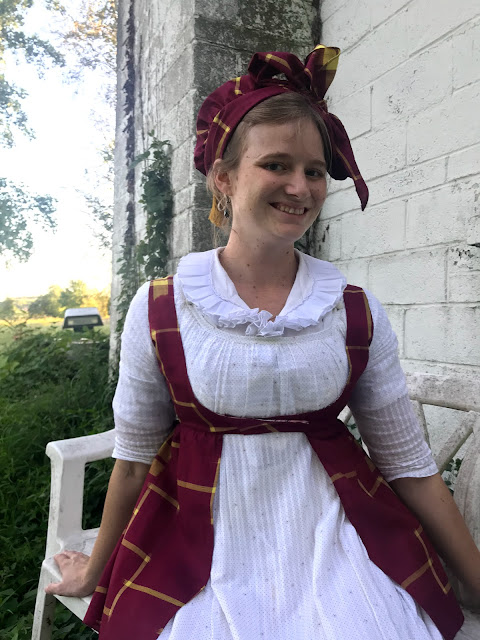 Anyway, I decided it would improve my regency appearance if I had a chemisette to wear with my gown. Thus, I began by scaling up an 1800-1825 chemisette pattern from Janet Arnold's Patterns of Fashion I. Chemisettes are patterned very simply so that took almost no time at all. 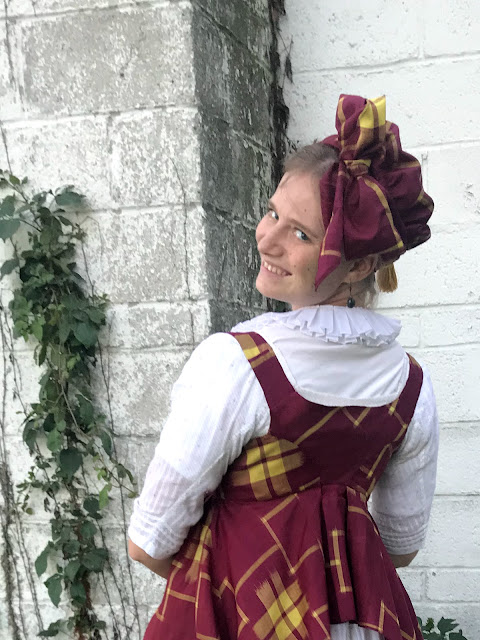 I cut the body of the chemisette out of white cotton muslin and the ruffles out of cotton organdy. I decided to have 3 ruffles around the neckline based on the pattern I was using and regency era portraits I'd been looking at online. 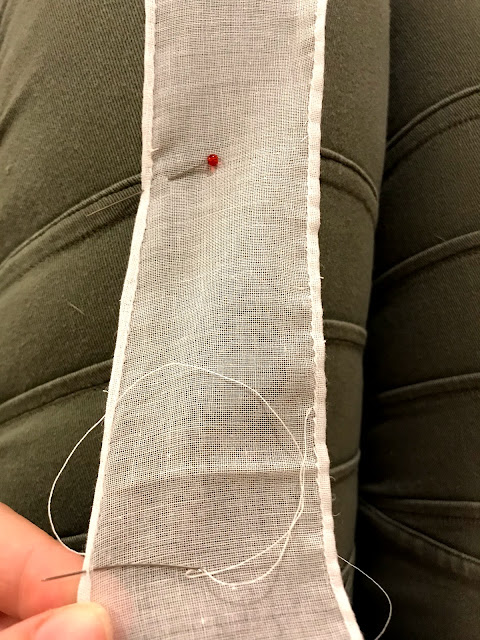 After everything was cut out, I began hemming the ruffles by hand. I hemmed, and hemmed, and hemmed some more. Each ruffle was 90" long and had to be hemmed on both sides. I hemmed ruffles for 2 weeks! Finally, after I'd hemmed 2 ruffles I decided I was done. I just couldn't face hemming another long strips of organdy. So, I went back to Pinterest and began looking for early 19th century portraits with examples of chemisettes with only 2 neck ruffles. I knew such chemisettes definitely existed, I just wanted a reference point - and what I found was even better than I'd hoped!

I discovered this 1823 portrait of a woman by painter Joseph Oleszkiewicz. Not only does the chemisette this woman is wearing only have 2 ruffles, those ruffles are box pleated!! As soon as I saw this portrait, I knew I was copying that chemisette!

Now, to give some reference about why I was so darned excited to see the box pleated ruffle in the painting: In Patterns of Fashion I, on most extant chemisettes from this era I could find online, and in most painting I could find online, chemisette neck ruffles are mushroom pleated. Mushroom pleats require specialized equipment I don't have. The entire time I was hemming ruffles I was brainstorming how in the world I would be able to simulate the look of mushroom pleats with my ruffles, and I wasn't thrilled with any of the ideas I'd come up with. Thus, when I found the portrait with the box pleated chemisette, I was ecstatic! Box pleats I could do, no problem! 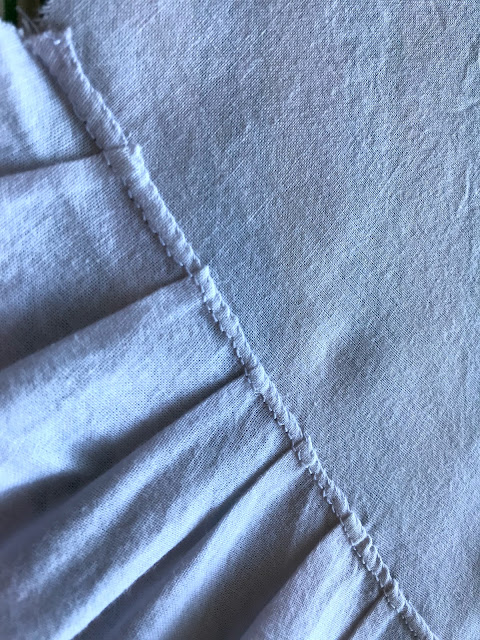 I sewed up the body of the chemisette by hand with the tiniest flat felled seams I've ever managed to do, then tried it on. 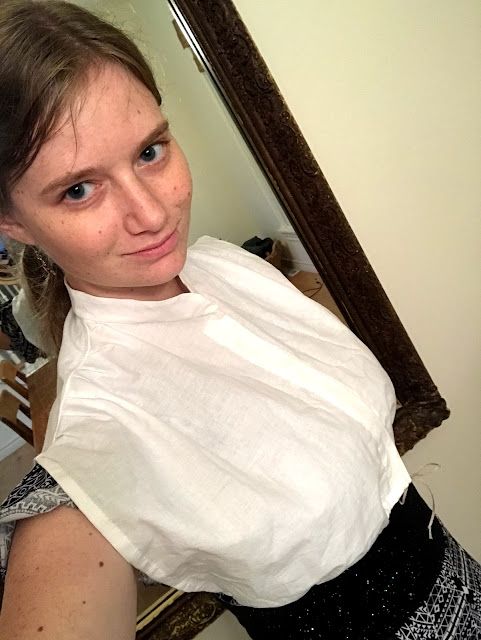 Even though I hadn't done any mock-up of any sort, it fit fine. There's not a lot of ways you can screw up the fit of a chemisette. With the body done in a fraction of the time hemming two ruffles had taken, I began my box pleating. 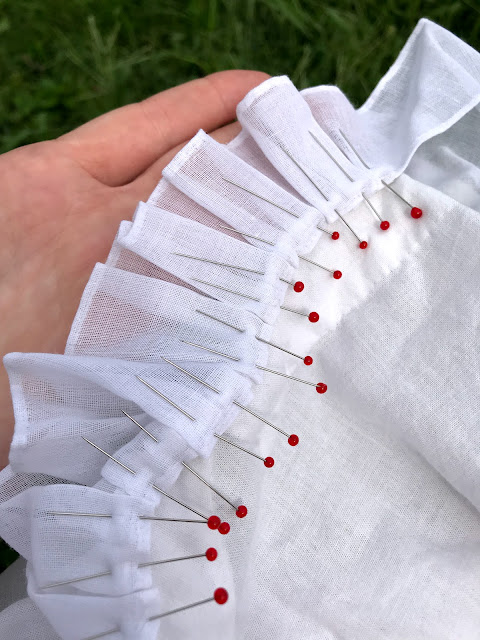 All around the neckband, and part of the way down the front opening, the hemmed strips of organdy were pleated. Once again, this took a fraction of the time hemming the darned strips had taken, so before I knew it, I was sewing the ruffles in place. 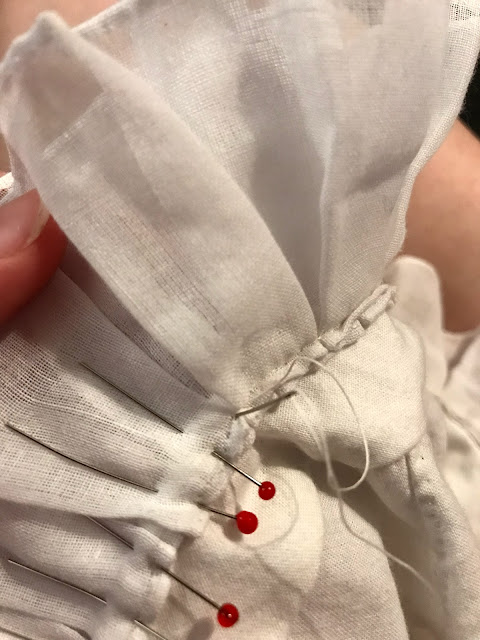 Ruffles sewn to the body, the box pleats were pressed for extra crispness, and my chemisette was done!! 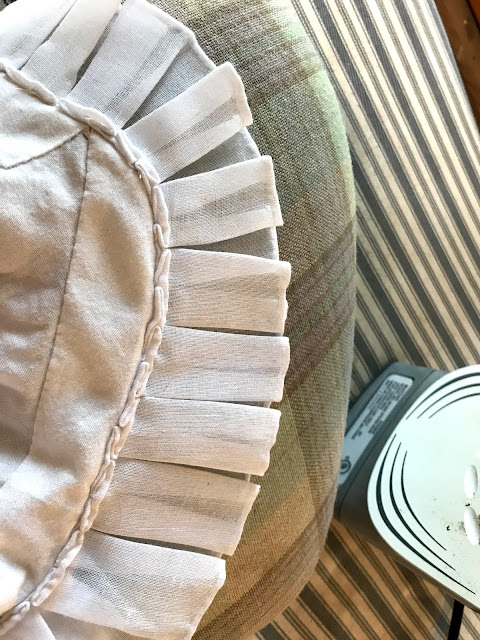 All ready for wear with my regency dress! (And another costume, which I'm actually wearing today and hope share with you this week!) 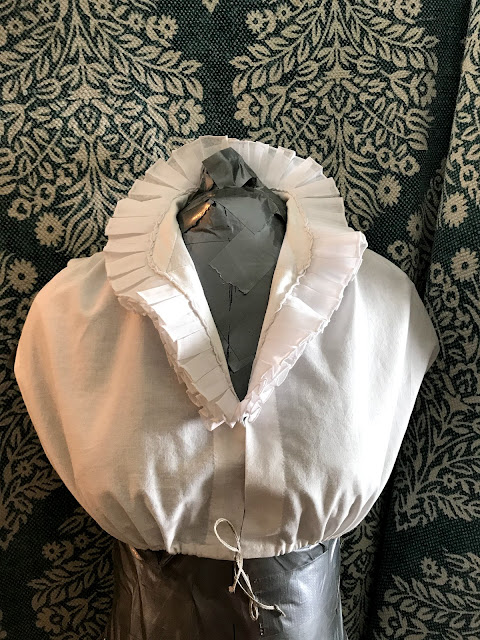 I'm very pleased with how similar my chemisette is to that in my inspiration painting! August's Historical Sew Monthly theme was "Out of a Portrait", and this chemisette was the perfect project for that theme! 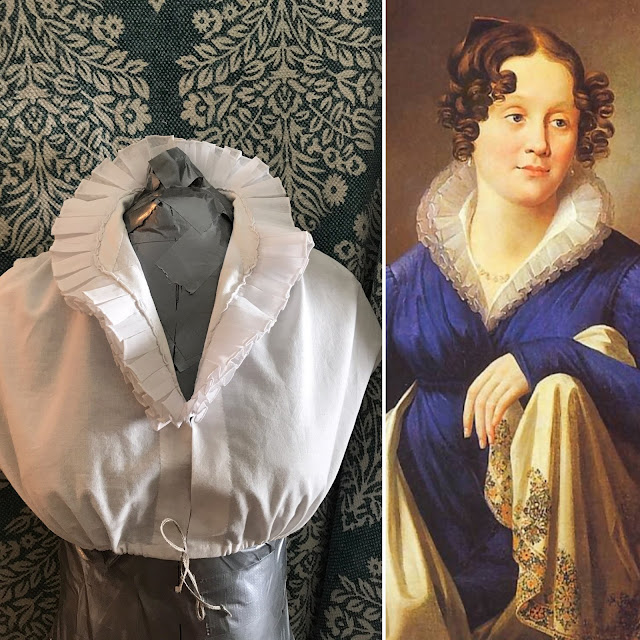 The Challenge: Out of a PortraitItem: ChemisetteWhat Portrait is it Based On? I do not know if it has a name, but it’s a portrait of a women painted by Józef Oleszkiewicz around 1823Material: Cotton Muslin for the body, Cotton Organdy for the ruffles
Pattern: a 1800 - 1825 chemisette in Patterns of Fashion 1, by Janet Arnold.
Year: The portrait is dated 1823, but I’ll be wearing this with a dress from a bit earlier.
Notions: Cotton thread and linen tape.
How historically accurate is it? The basic pattern shapes are accurate, it’s all hand sewn, and the materials are plausible. The construction method and order was all guess work on my part so I’m not sure I got it quite right. Probably about 7/10
Hours to complete: I don’t know, hemming those organdy ruffles took forever!!
First worn: Mid-September for my sister's Pride and Prejudice Birthday Party.
Total cost: The organdy was a $2 find at a thrift store, the muslin was $2 a yard, and I used about a yard, add a couple dollars for thread and linen tape for a total of $6 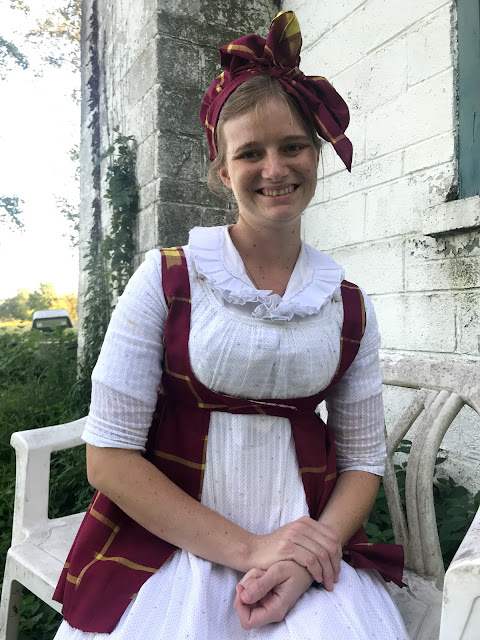 A chemisette may have not been the most exciting thing to sew, but I'm very glad I took the time to make it. It's just the finishing touch my regency look needed. And, I'll be able to wear it with a verity of future eary 1800's dresses I have planned. Such a very, very, useful piece this will be in my historical wardrobe!

Posted by Alyssa at September 29, 2019
Email ThisBlogThis!Share to TwitterShare to FacebookShare to Pinterest
Labels: Costume, Handsewn., Historical, HSM, Me, Regency