Back in November I decided I was going to make myself 3 new corsets before the end of the year, and I was 2/3rds successful. I wanted to make a 1910's corset, and I got as far as cutting out that pattern, but nothing else. Next, I needed to make an Edwardian corset to go with the 1901 pink and fur gown, and I actually got that one done. Finally, I needed a new Victorian corset to replace my burgundy one. I altered my burgundy corset to fit better after I gained weight on the World Race. Then, once I lost the extra weight, the corset was no longer comfortable, thus it was time for a new one! 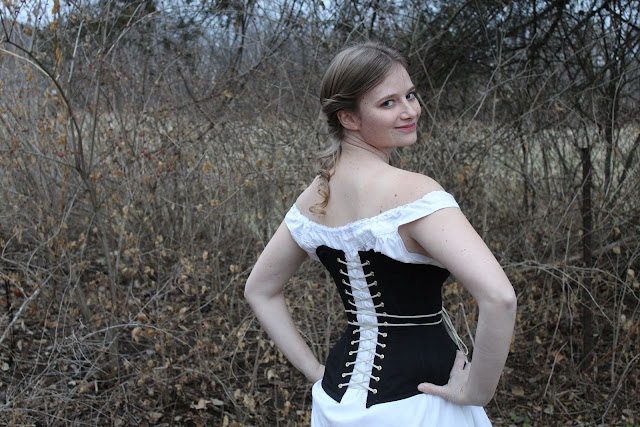 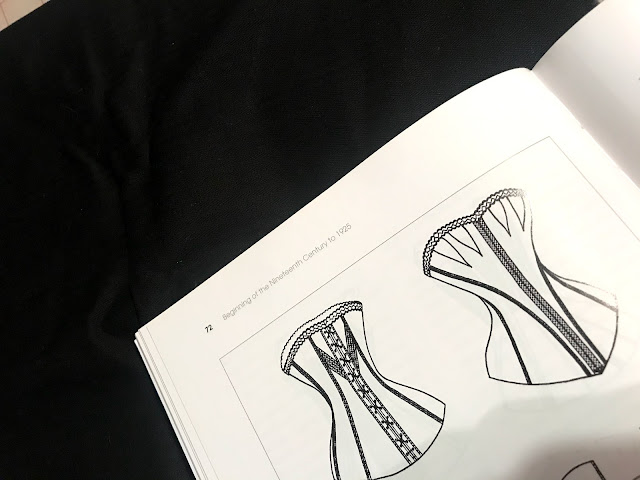 I decided to make the 1840's corset from Corsets and Crinolines by Norah Waugh. I've got a few 1840's dresses in my closet, so I decided a corset specific to this decade would be a good addition to my collection. However, as I don't feel like making a corset specific to every decade I costume, this will get worn with more than just my 1840's dresses. The shape is general hour-glass Victorian enough to pass for several different decades. 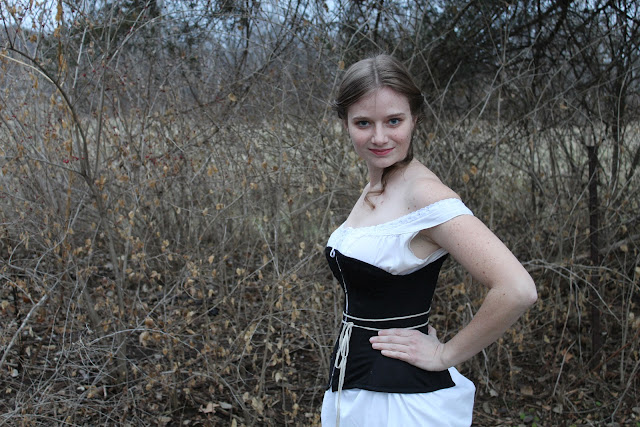 I started by copying the pattern out of the book, then using the scale at the bottom of the page as a guide for drawing a grid over the copied pattern. 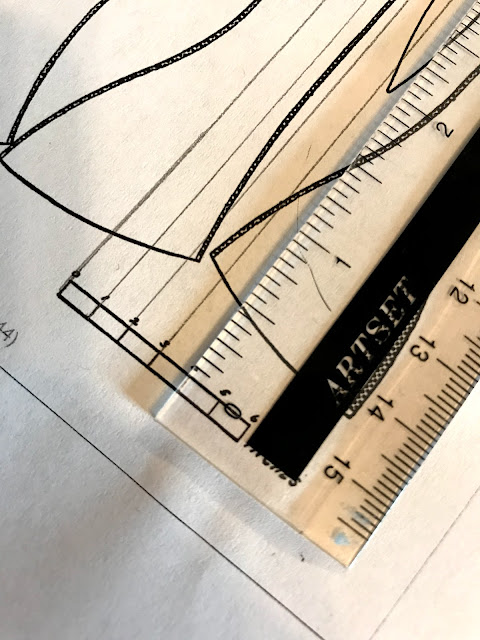 I think hand-drawing a grid over the whole pattern is one of the more fiddly ways to begin scaling up a book pattern, but I'm pretty confident working with gridded patterns, so that's what I did. 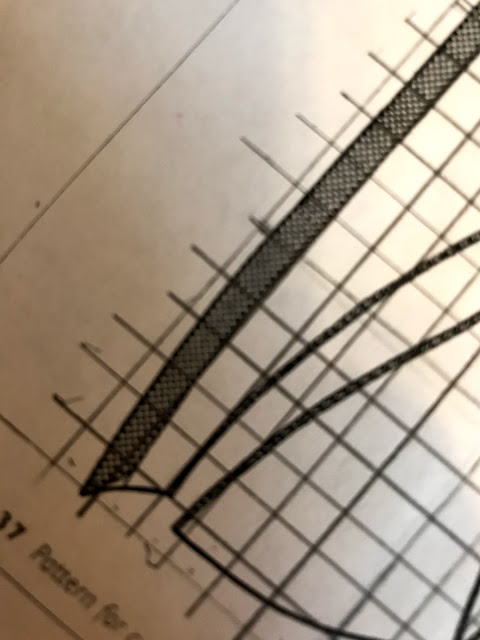 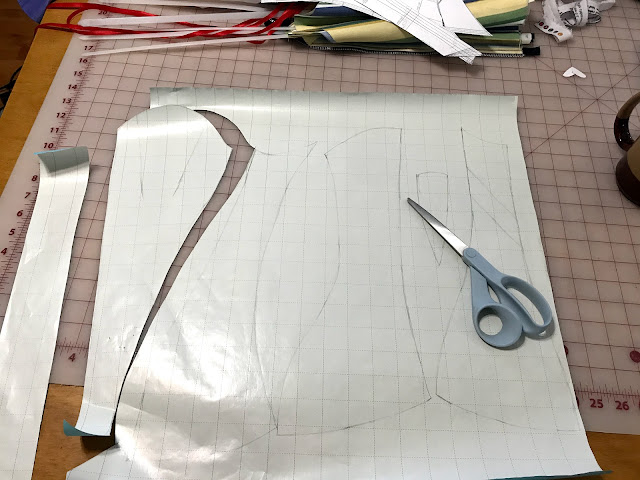 Once scaled up, I was pleased to discover the pattern appeared to be approximately my size (I have a 37" bust, 28" waist, and 38" hips, for reference.), so I went ahead and made a mock-up from some heavy cotton in my stash before making any alterations to the pattern. 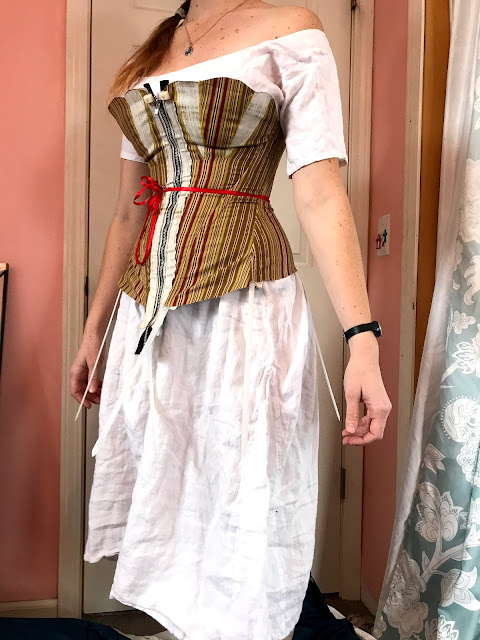 The mock-up was boned with heavy-duty zip ties, had a separating zipper in the front so it would come on and off easily, and had a pair of lacing strips (which I specifically made for corset mock-ups) basted into the back. 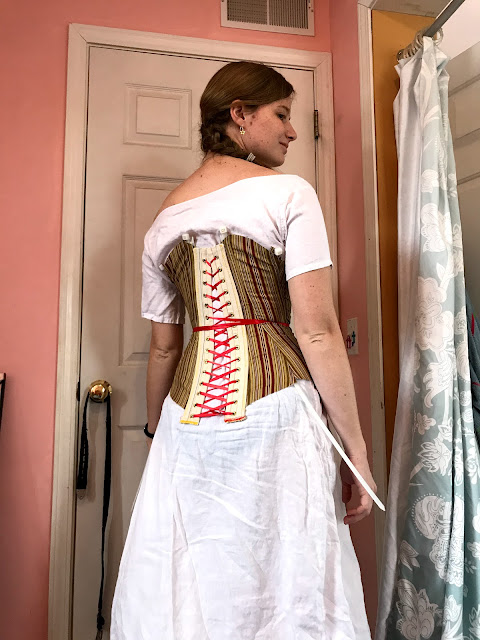 The mock-up fit better than I expected! There were just a few minor adjustments to make. Some length needed to be trimmed off the bottom, the lacing gap needed to be a bit wider, and I needed a bit more room in the hips. 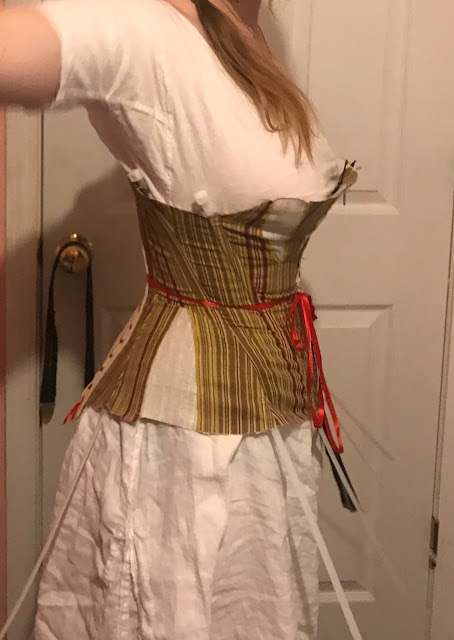 I trimmed off the extra length, added a hip gusset, figured out how much I needed to take in from each seam to get a 2" gap in the back, I decided I was ready to make my corset. 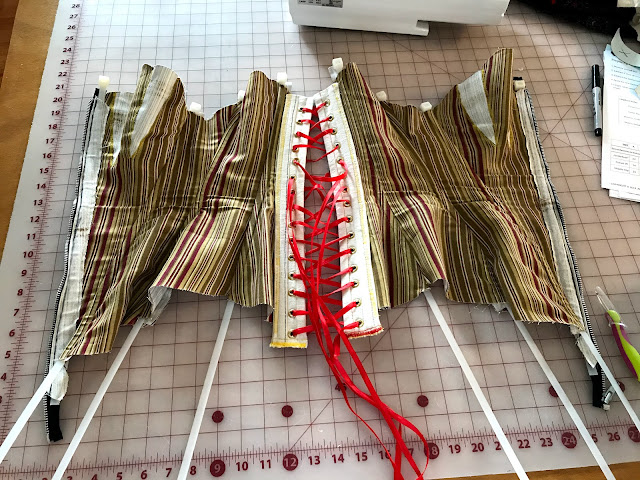 I disassembled my corset mock-up and transferred the alterations to my paper pattern. 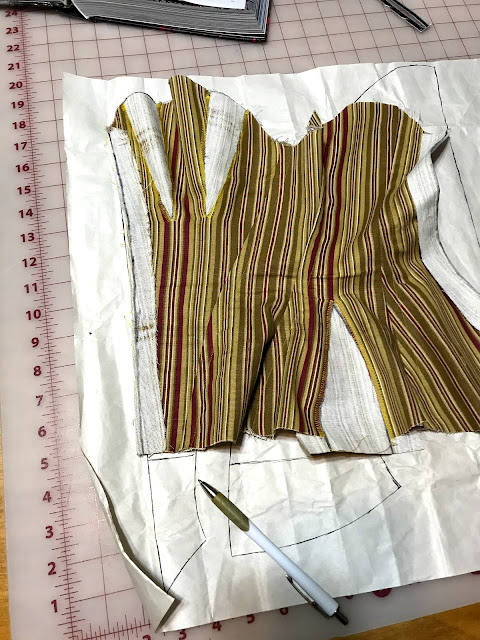 Pattern ready, out came my fabric! 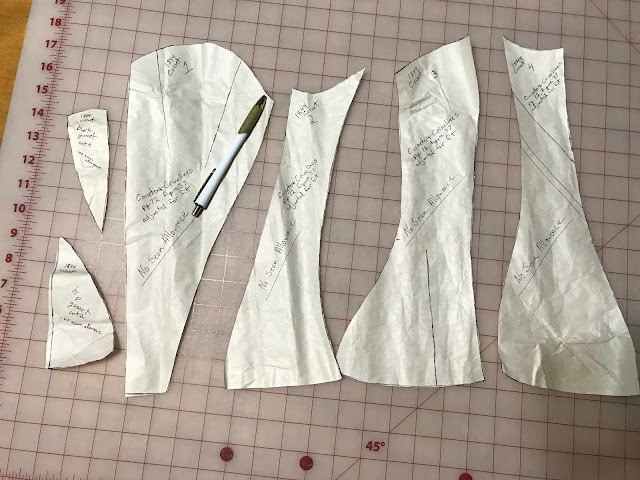 A while back, Joann's had cotton coutil, a fabric specifically designed for making corsets, in their cosplay fabrics line. It only came in one color, black, but still. It was coutil! When this fabric went on clearance for a reasonable price, I snagged some. 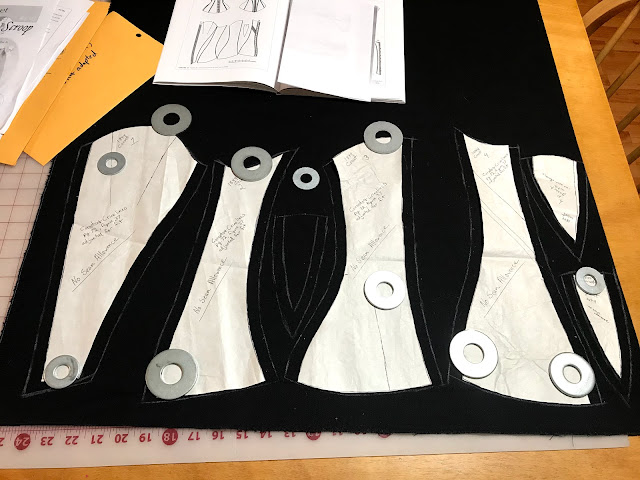 Thus, my new corset was made from a layer of black coutil, and lined with light weight cotton ticking from my stash. 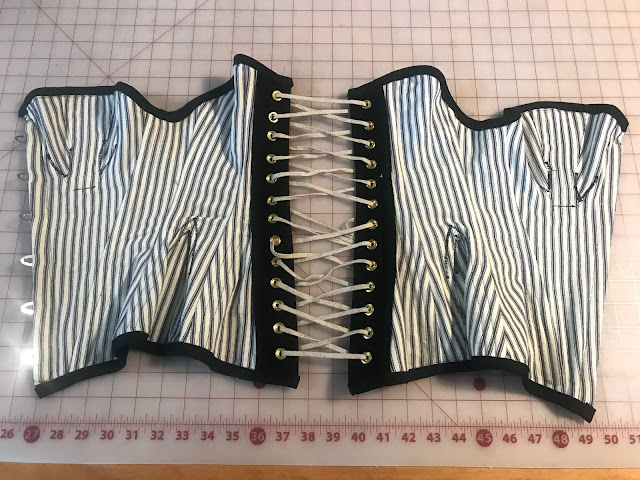 The corset is boned primarily in spiral steel boning, with spring steel along either side of the grommets in the back. The boning is sandwiched between the two layers of the corset. 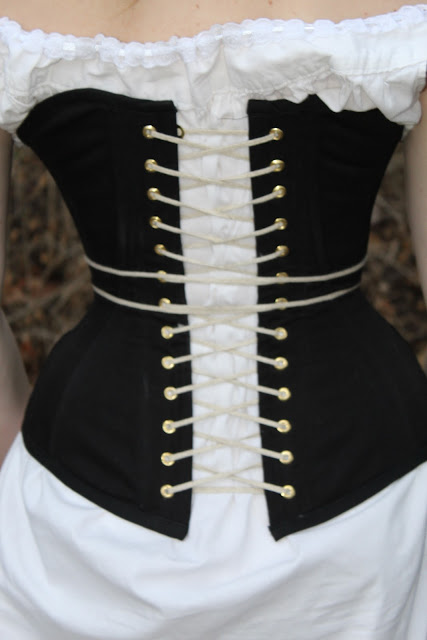 I finished the corset with hardware from my stash, so the busk and grommets are different colors. Gold grommets, and a silver busk. 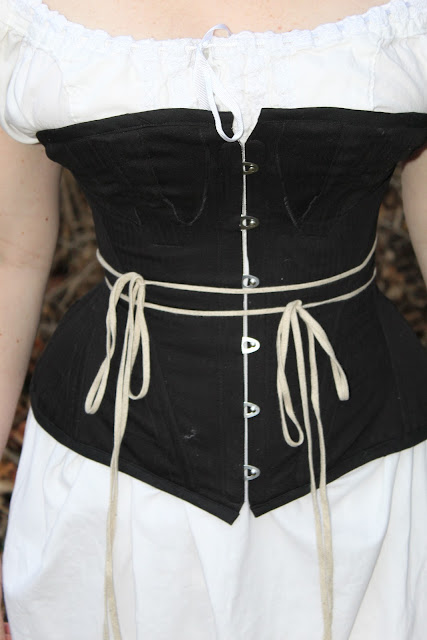 I was on a deadline to finish this corset before the Christmas Ball, so it's entirely machine sewn, including the gussets and binding. 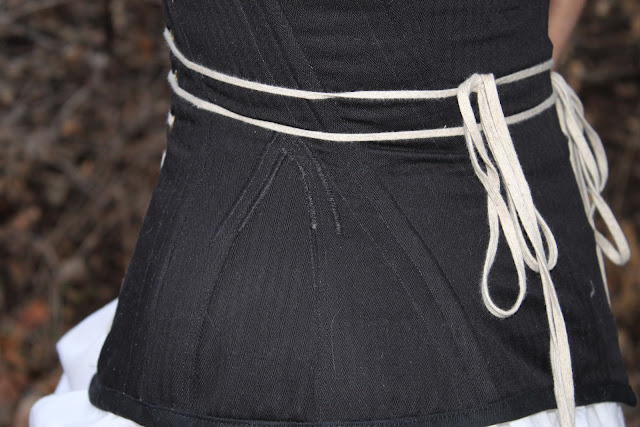 After patterning and mocking-up, this corset went together very quickly. Looking at the close-up pictures I can easily see it's not perfect, but - it's comfortable and does its job, so I'm happy with it! 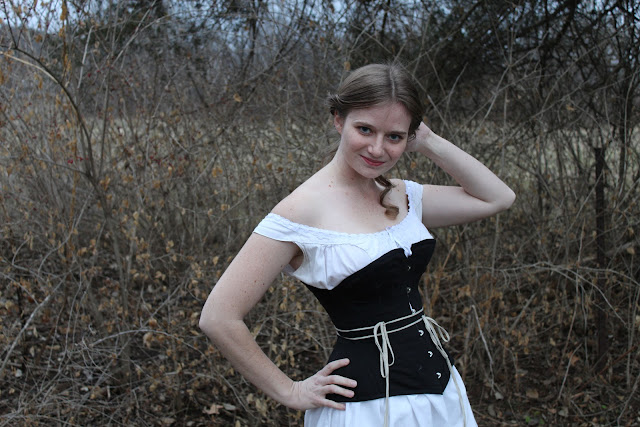 As I'd hoped, the shape is generic enough to work for pretty much the entire Victorian era, if you're not too picky. 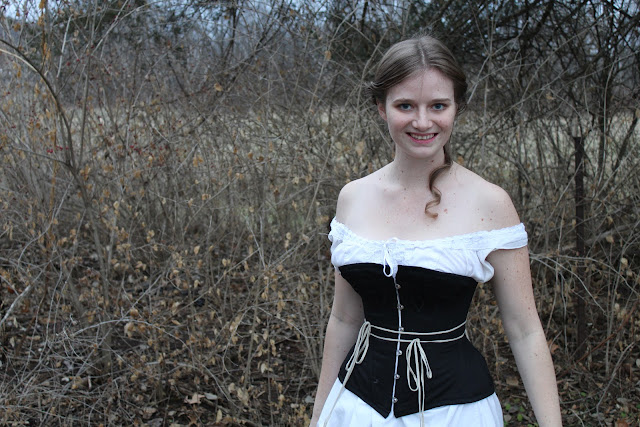 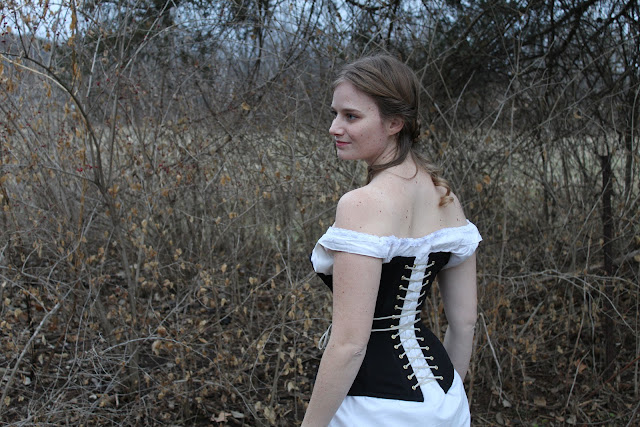 I shouldn't need to make myself a new Victorian corset for a couple of years! 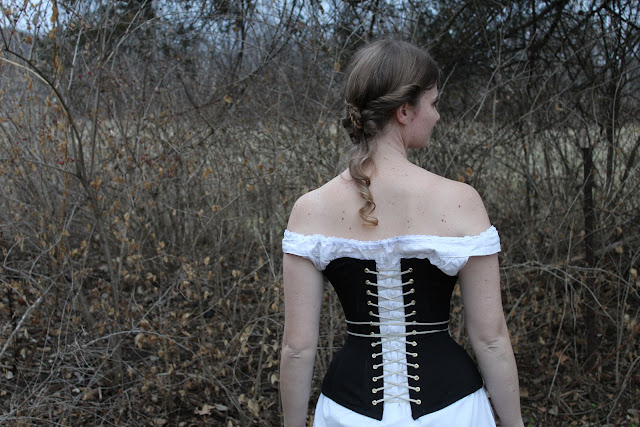 I'd say this first attempt at making a corset without a commercial pattern was a success! 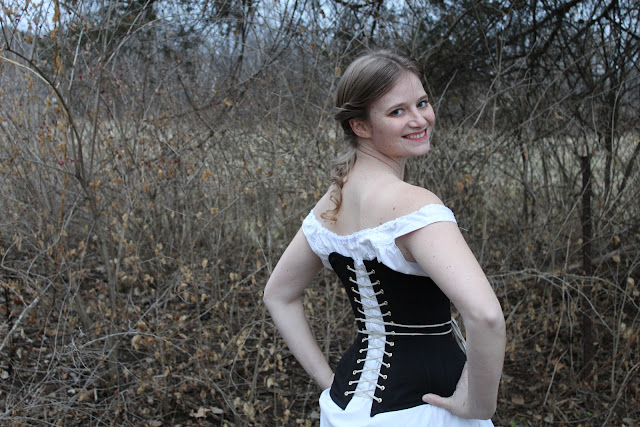