In the past couple years wide legged and straight legged pants have been making more and more of an appearance in the sewing world (and, to an extent, the world at large as well). The more I've seen of them, the more the style has appealed to me, and I've been tempted to buy more than one PDF pattern for these pants. However, something's held me back. As much as I've admired these wide, straight-legged pants on Instagram, I wasn't sure if I'd actually like them on me. Spending $15 and a whole lot of time taping together for one of the trendy PDF patterns seemed like a lot for just testing out a style, which I might not even like. 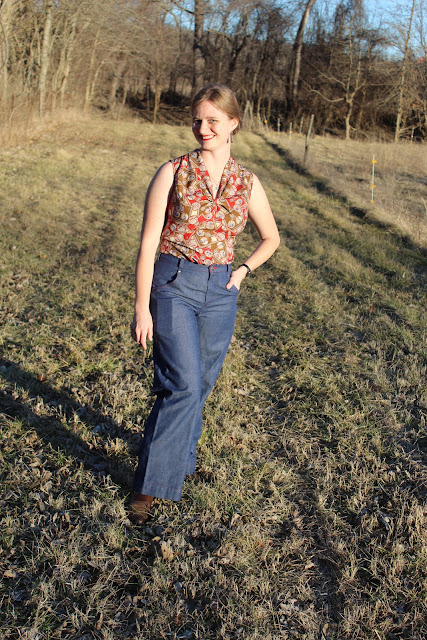 Then I saw Simplicity 8701 during a pattern sale, and picked it up just as fast as I could. it appeared to be the solution to my dilemma. $2 rather than $15. Tissue paper I could just cut my size out of real quick rather than a ton of printer paper to tape together. And, a pattern company I'm very familiar with and already know the fit of, rather than one I've never used before. Now, I'm still interested in picking up a couple of those PDF patterns I've been admiring, but the Simplicity pattern seemed to be a pretty good, low investment, way to try out the style. 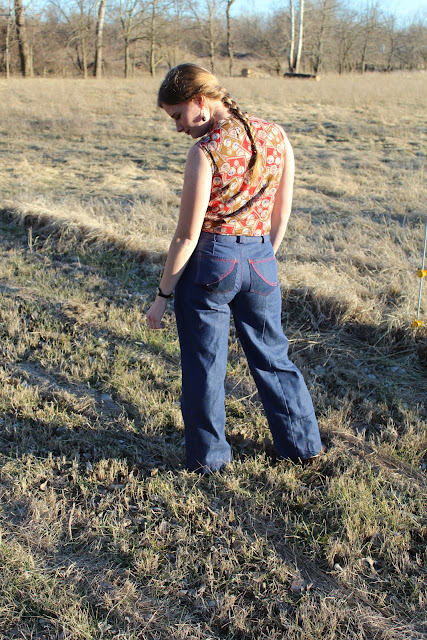 Of course, actually getting around to making these pants took way longer than expected. I finally cut them out in January, well over a year after I bought the pattern. 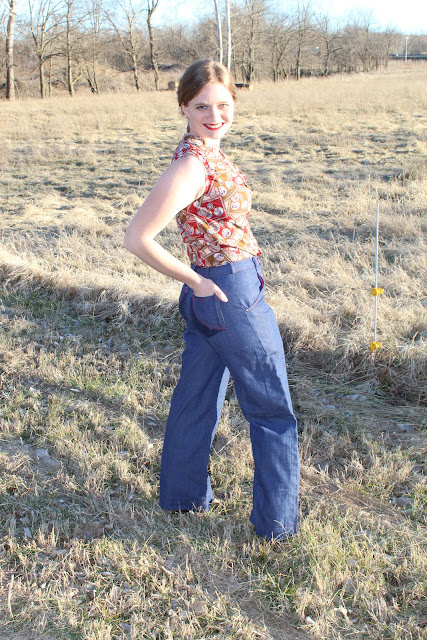 I decided to make them out of a piece of heavy, medium blue, denim I found in my stash. I think my grandma gave it to me, but I couldn't actually say for sure. I have an awful lot of fabric. And I lose track of where I acquire it. 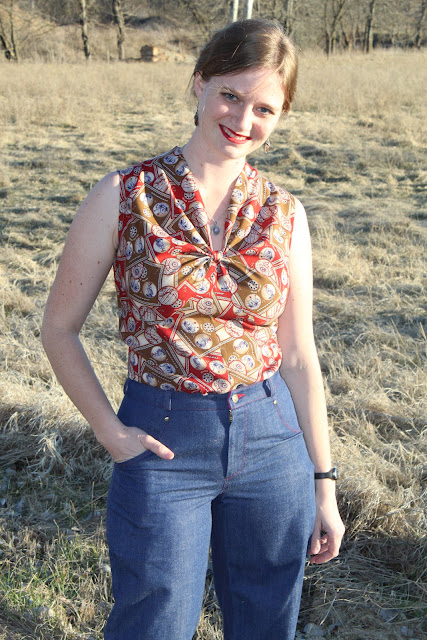 Since I was using denim, I decided to make my pants as jeans-like as possible. Thus, I adapted the front of the pattern to have scoop pockets, like blue jeans, rather than the patch pockets the pattern featured. Of course, I made these pockets extra deep, because the bigger the pockets the better! 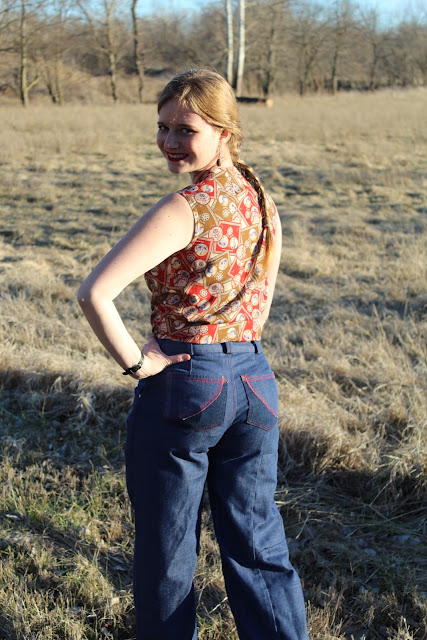 In keeping with the jeans-theme, I also added back patch-pockets. Designing and decorating back pockets is probably my favorite part of jeans making. 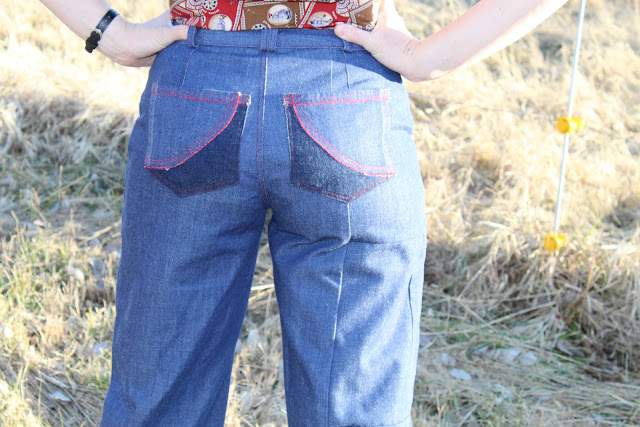 The back of the patterns is fitted with darts, rather than a yoke, the way jeans are, and I left it that way. The only alteration I made to the back pattern pieces was to raise the back rise an inch or so. I have yet to meet a pants pattern I haven't needed to add height to the back rise of. Darned butt. 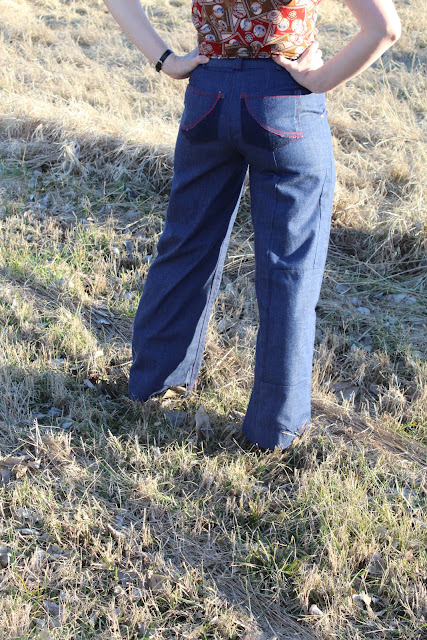 I had just shy of 2 yards of this denim, which I figured would be plenty for a pair of pants. Not quite. The fabric was narrower than I expected, so I had to get a little creative. One of the back legs is majorly pieced together, as is the waistband. The back pockets are made from the scraps of denim I cut out of the front of the jeans, to make the scoop pockets, appliqued onto some darker denim scraps from my stash. 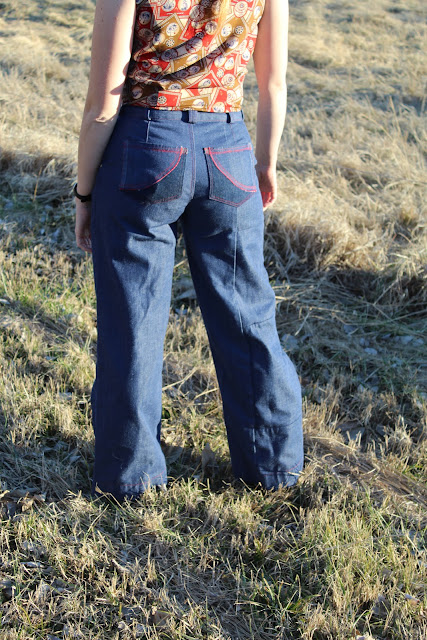 The denim featured red thread running through the selvage, which I made sure to keep visible on the back pocket. 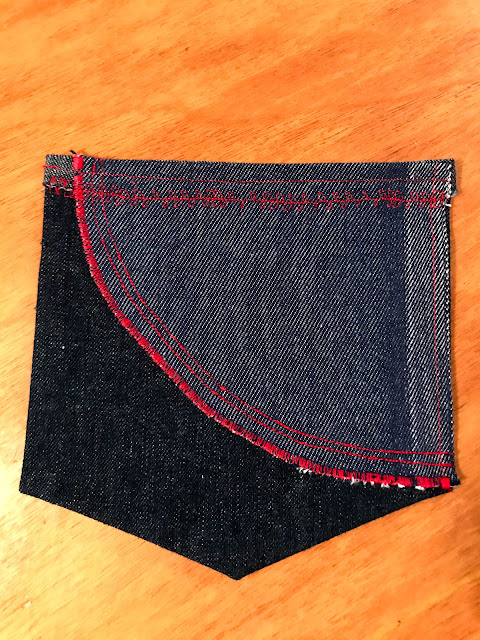 And since there was already a little bit of red, I decided to add more. Thus, all the top stitching is done in red. 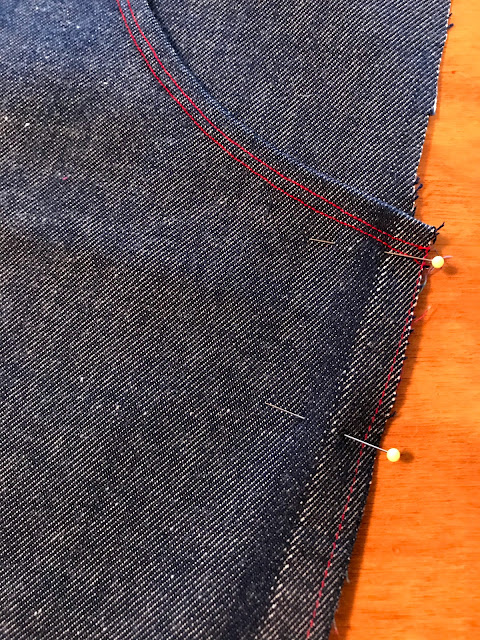 I didn't have any red top stitching thread on hand, so I just used plain All-Purpose thread, which worked out better than I expected. I was afraid the thinner thread would disappear into the denim, but the red is a distinctive enough color that the top stitching is nicely visible, though less than overwhelming. 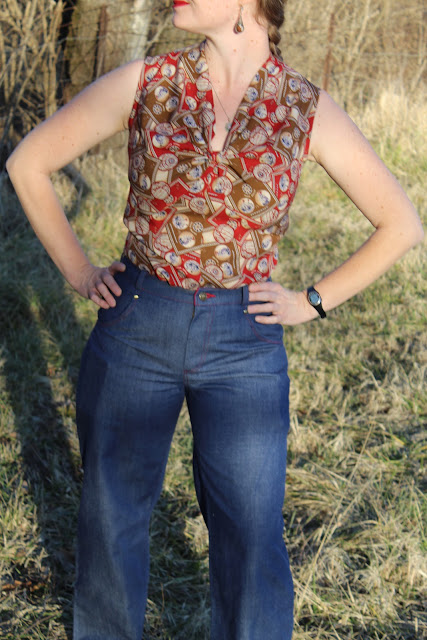 To finish off the pants and make them as jeans-like as possible, I added some rivets to the front pockets and a jeans button to the waistband. 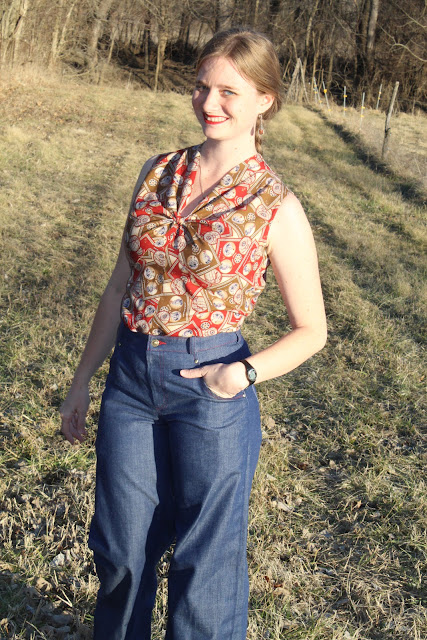 On first attempt, I managed to make my button hole too small. So, I cut it slightly larger, then just zig-zag stitched around the edges. Not the prettiest button hole I've ever made, but it does it's job. 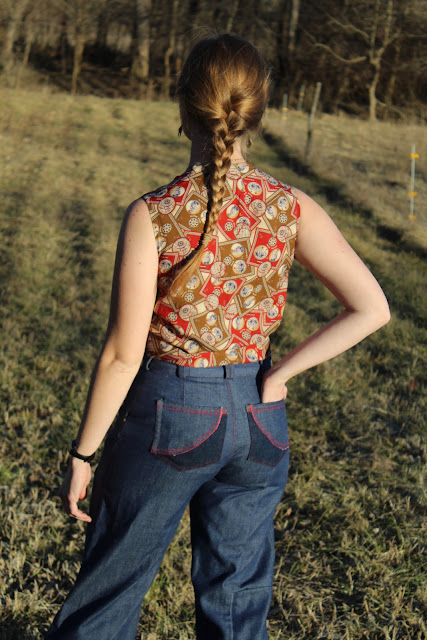 So, now that I've made them and have been wearing them regularly for a couple months, what do I think of these wide-legged, straight-legged pants? 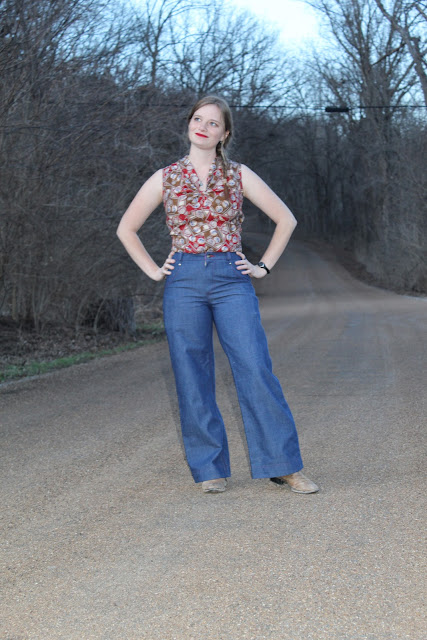 Generally speaking, I like them. I wear them about once a week. This style most likely won't be replacing my boot-cut jeans for everyday wear, but I'll probably make a couple more pairs, and try out different patterns, in the future. 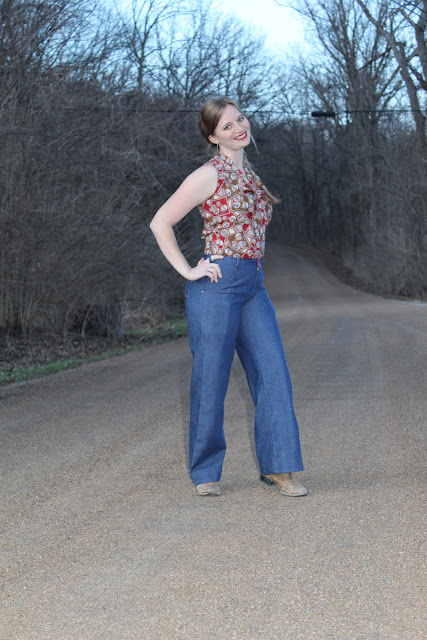 I have plenty of non-stretch, heavy, bottom-weight fabric in my stash, and this style is perfect for that! 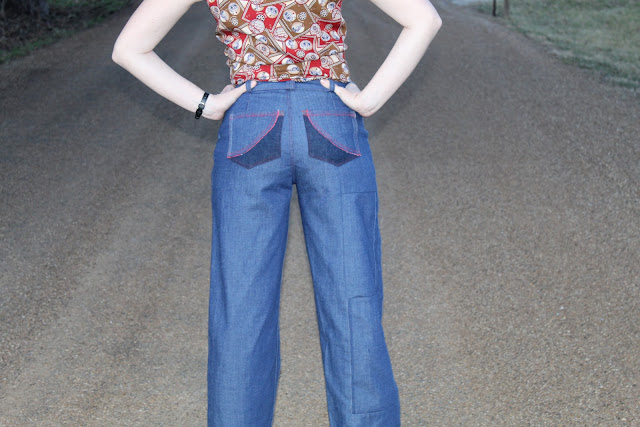 So stash-busting and wide-legged pants, here I come!

Posted by Alyssa at March 28, 2020
Email ThisBlogThis!Share to TwitterShare to FacebookShare to Pinterest
Labels: Sewing