A Mooi Sundress with Criss-Crossed Straps 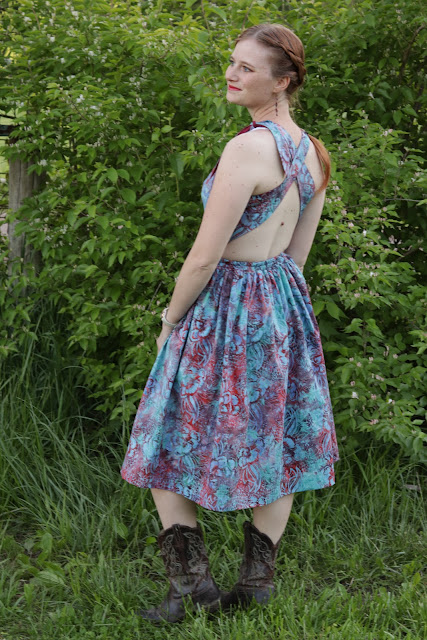 I certainly have a weakness for dress designs from The Eli Monster. Her dress designs are fun and whimsical, with a touch of vintage-inspired thrown in. When my sister was still in children's sizes, I was always eager to test The Eli Monster's girls' dress patterns. Now that my sister has grown up, I'm excited that The Eli Monster has started coming out with a handful of women's dress patterns so I can still make these fun designs, despite my lack of a child to sew for. It's fun to make these dresses for myself! 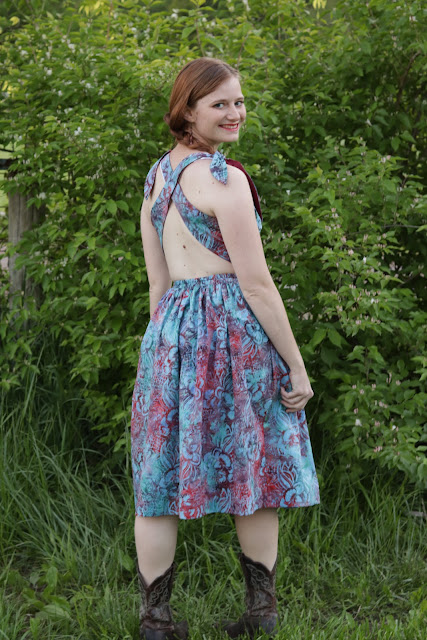 Thus, it should be no surprise that when, a few weeks ago, The Eli Monster put out a tester call for an adult sundress pattern, matching one of their recent children's sundress patterns, I quickly volunteered. 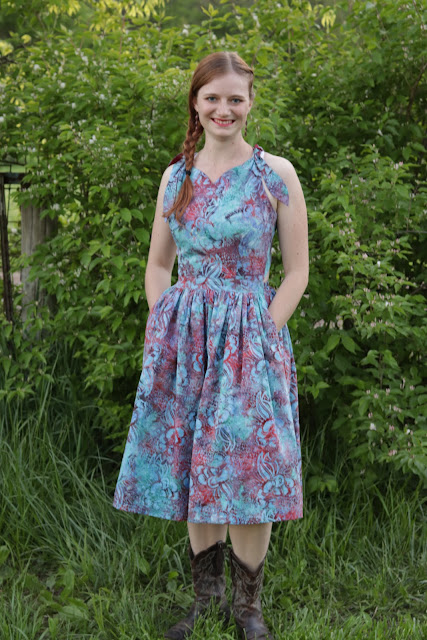 The new sundress pattern featured a full skirt with pockets - two things I consider mandatory for just about every sundress I ever make. Along with these oh-so-important features, the pattern also boasted an open back with criss-crossed straps that tied at the shoulders. I had no idea how one was to wear a bra with such a design, but I decided I'd cross that bridge when I came to it, and set to picking out my fabric. 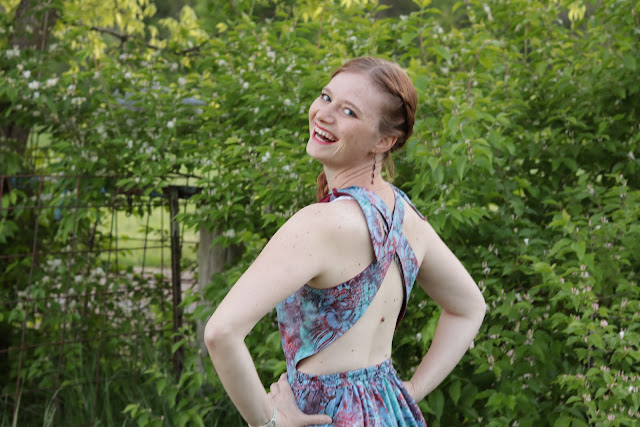 I chose a red and blue and teal cotton batik out of my aunt's friend's mother's fabric stash, which I was gifted last year. I didn't have a ton of this fabric, and it came to me in several oddly shaped pieces, but I figured I could just eek this backless sundress out of the yardage I had. 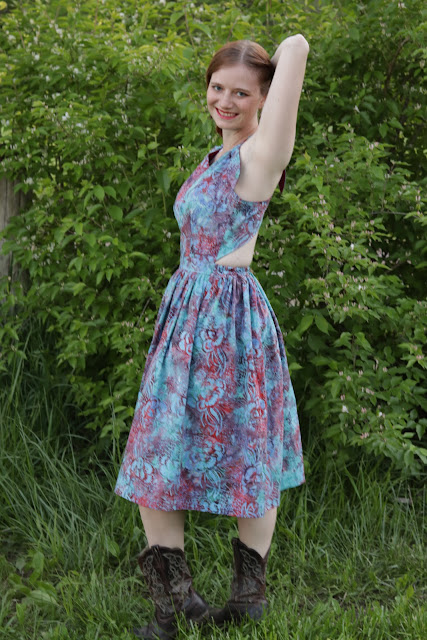 To conserve my main fabric, I decided to line the bodice in a solid dark red cotton. This fabric shows at the shoulders where the straps are tied, but I think it matches one of the colors in the batik print well enough to look good. 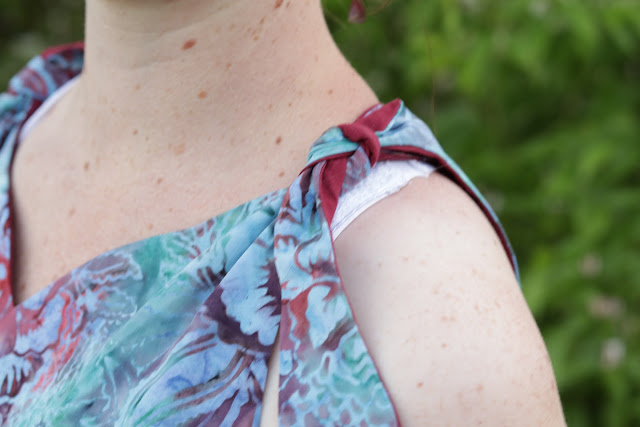 With the contrast bodice lining, I did indeed have enough of the batik to make the dress! I cut it out and sewed it up with no issues. 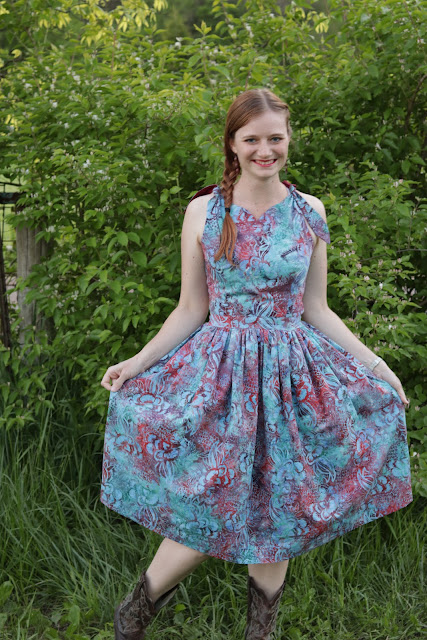 The back waistband of this dress is fitted with elastic and there are no buttons, or zippers, or other closures beyond the shoulder ties. This made it a pretty quick sew - which was good because the time I saved not sewing zippers or buttons was used instead to figure out the bra issue. 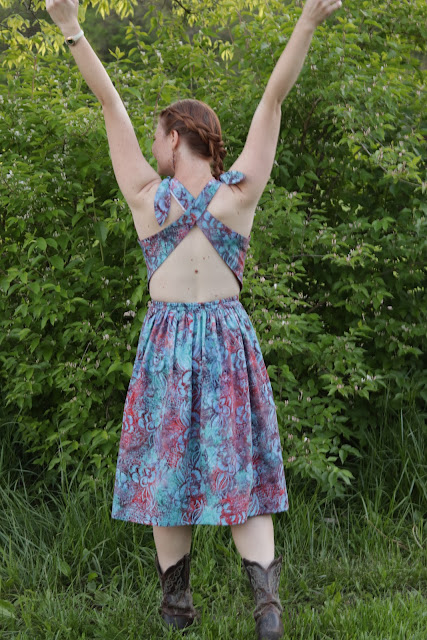 As you can see, with the open back there was no way to wear a normal bra with this dress. the band would show. 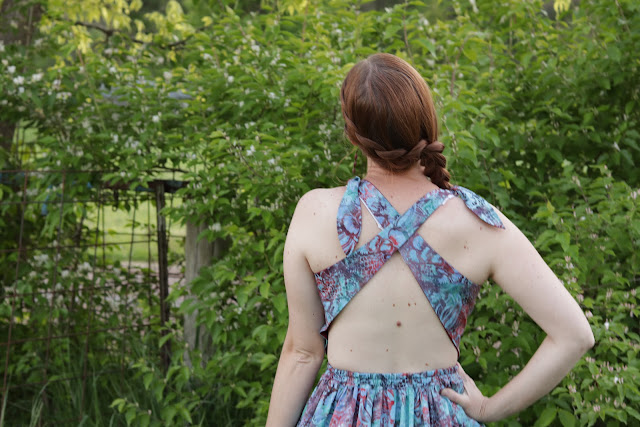 As I wasn't a fan of the bra-less option I needed to figure out a way to remove the band from a bra and still have it be supportive. After a bit of brain storming, I came up with an idea. I didn't remove the band, I removed the straps. 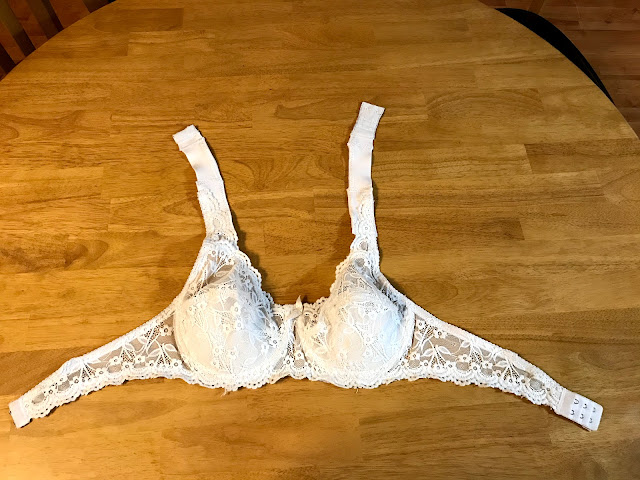 I started with a cheap bra I picked up in Europe while I was on the World Race. (Once I got to Europe, all the bras I'd brought with me were plain wore out. So I picked up a handful of these cheap lace bras just to get me through until I returned home 5 months later. I may have picked up too many of these bras, as I still have several in decent shape left. Thus, this bra was a very good candidate for re-fashioning!) The straps on this bra just hooked in place, rather than being sewn on, so those were easy to get rid of. Once the straps were out of the way, I found a second old bra. This second bra donated the hook-and-eye part of its band to the cause. 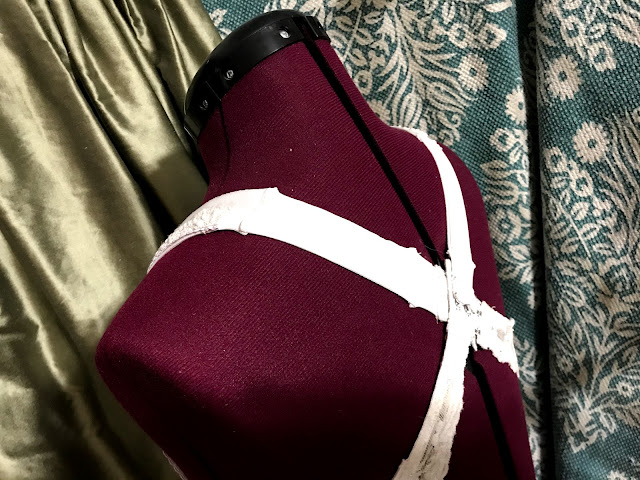 The band portions which had been cut off the second bra, were then sewn onto to the top of the cups of the first bra, forming new straps. 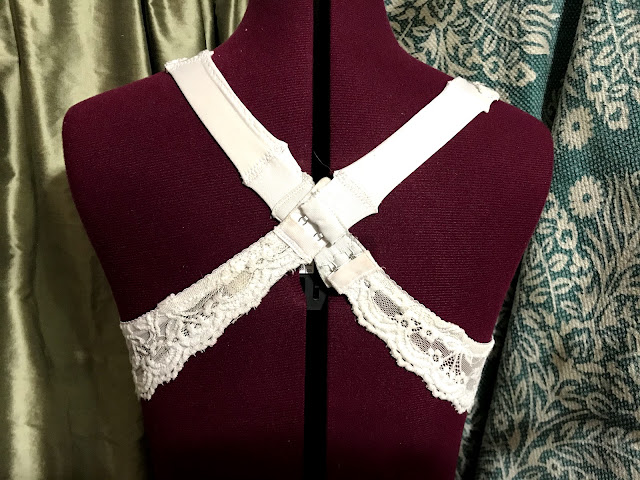 These new straps could then be hooked diagonally across the back to the original bra band. The left strap hooked to the end of the right band and vice-versa. 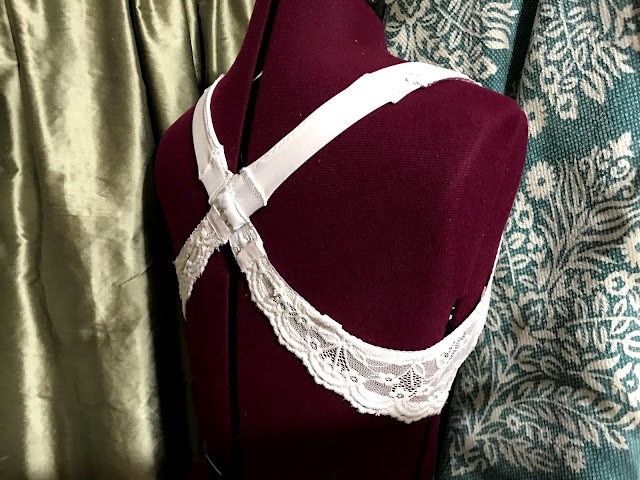 This eliminated the bra band straight across the middle of the back, while still providing the support the bra was designed for. The newly rigged up strap/band combination can now be completely covered by the fun criss-crossed shoulder straps of this sundress! 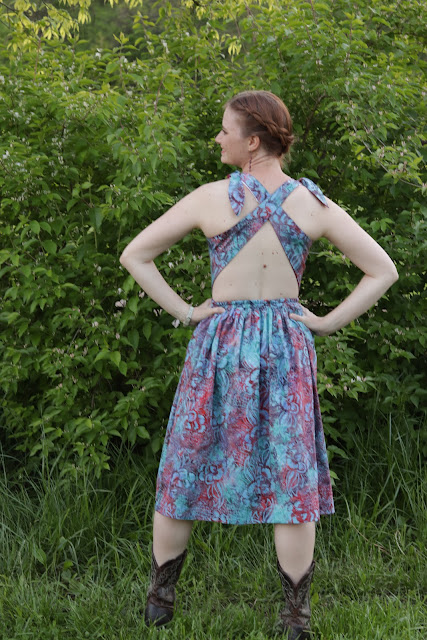 And so that is the story of the newest sundress in my closet. A pattern test and a bra re-fashion. The resulting dress is just too much fun not to be worn all summer long! 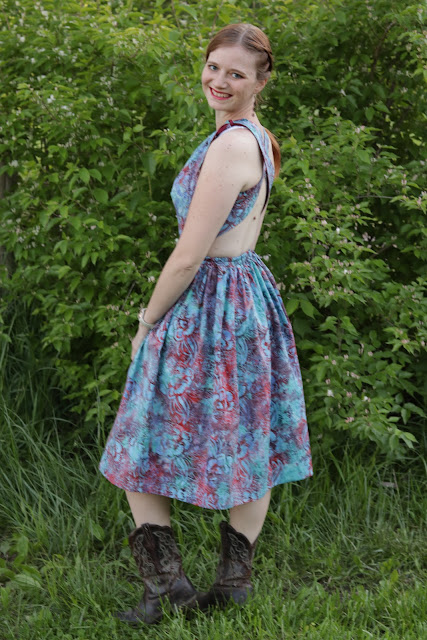 If you're interested, this pattern, the Mooi Dress, is on sale for the next week over the The Eli Monster website! It's only $7 right now!

I was given this pattern for free in exchange for testing it and giving my feedback. All thoughts and opinions given here are my own. I was not required to write this blog post or otherwise share about this pattern.

Posted by Alyssa at May 29, 2020
Email ThisBlogThis!Share to TwitterShare to FacebookShare to Pinterest
Labels: 52 Week Challenge, Pattern Testing, Refashioning, Sewing