For my Edwardian evening gown, I decided to start with the skirt. I've learned the hard way, more than once, that historical ensembles generally turn out better if you make the skirt first. This way, you can make sure the bodice is the correct length, lays smoothly over the waist band of the skirt, and has the correct shaping at the hips. Make the bodice before the skirt and it's likely too end up a bit too long, or a bit too short, and either be too loose or too tight through the waist and hips. Like I said, I've learned this the hard way. More than once. 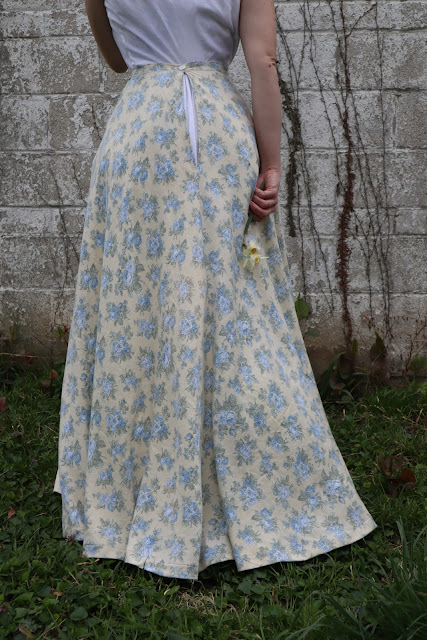 Of course, in order to make the skirt for my evening gown, I had to figure out a pattern for the skirt. With my S-bend corset and hip padding on, the difference between my waist and hip measurement is around 16". Most commercial patterns are drafted for a difference of 10". After my attempt at wearing my 1906 Princess Skirt with my Edwardian undergarments, I decided I would probably need to draft the skirt pattern myself in order to get the correct waist to hip ratio. 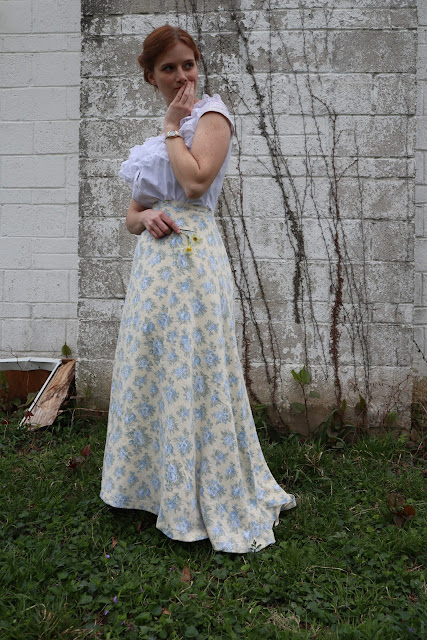 I stared at the one picture I had of the dress I was replicating for a very long time, trying to figure out how that skirt might be patterned and where the seam lines were before I began drafting my skirt pattern. 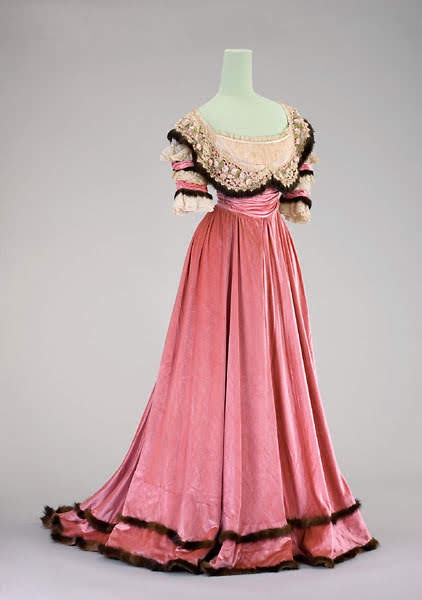 I could not see any seam lines on the inspiration dress skirt, so I decided the skirt was probably not gored, but rather drafted as a circle skirt (After making the actual skirt for my gown a few weeks later, I'm no longer convinced of this, but I was at the time, so a circle skirt is what I made. More info will be in a future blog post.) 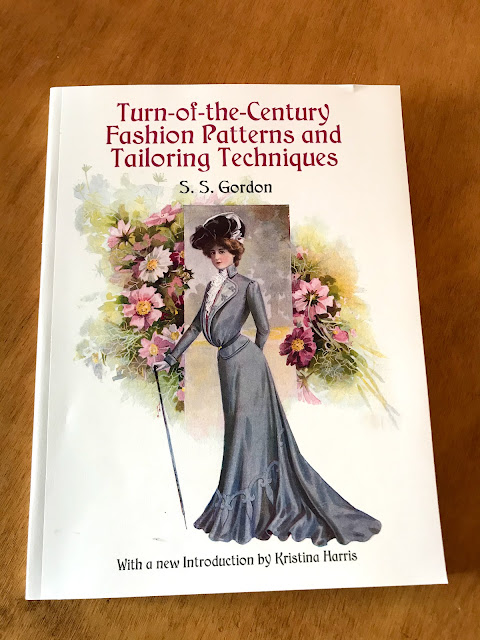 For Christmas one of my family members gave me this book, Turn of the Century Fashion Patterns and Tailoring Techniques, a Dover publishing re-print of a 1901 dressmaking and tailoring book. Along with other things, it includes instructions on how to draft multiple different late Victorian and early Edwardian skirts - such as the circle skirt. Exactly what I needed! 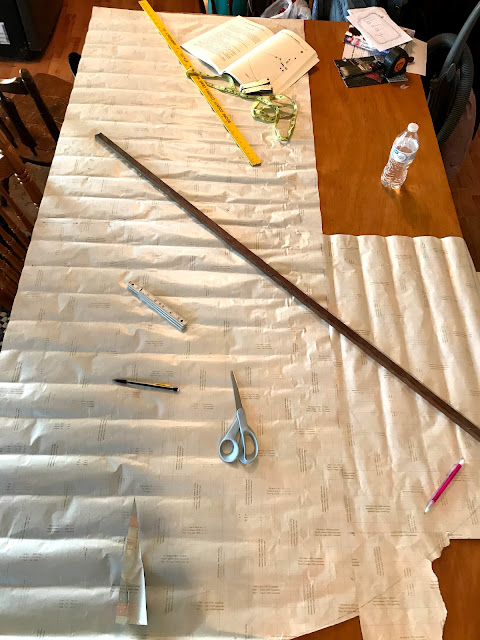 I put on my corset and hip padding, took my measurements, then followed the directions in the book to use said measurements and draft the circle skirt. 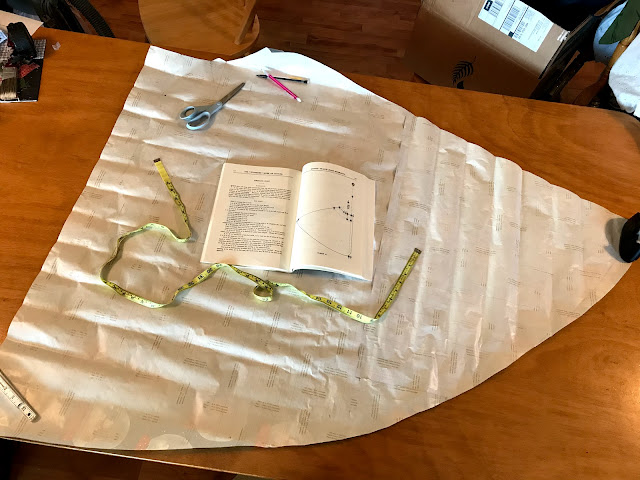 Now when we hear "circle skirt" we generally think of a 1950's circle skirt, which is actually a full circle with a hole in the middle for your waist. I've made myself a few skirts like that. Edwardian circle skirts, however, are a little different. They're actually closer to what we would call a half circle skirt now a days. In early 1900's fashion a "circle skirt" is a skirt patterned as one large flared piece instead of multiple smaller gores. This large flared panel is a portion of a circle, thus the name. 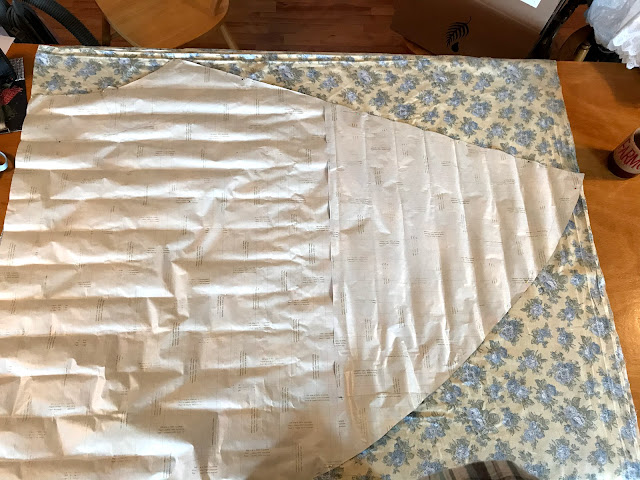 My finished circle skirt pattern was HUGE - much wider than most fabrics are. Clearly, fabric would have to be pieced together to make this skirt. Piecing together widths of fabric to make very full skirts is historically accurate, however, so no problem! For my mock-up though, just to test if my skirt pattern actually fit and looked the way it was supposed to, I didn't feel like piecing together fabric. Thus, I cut my mock-up out of a thrifted king size sheet. The sheet was just barely wide enough for my full pattern piece to fit. 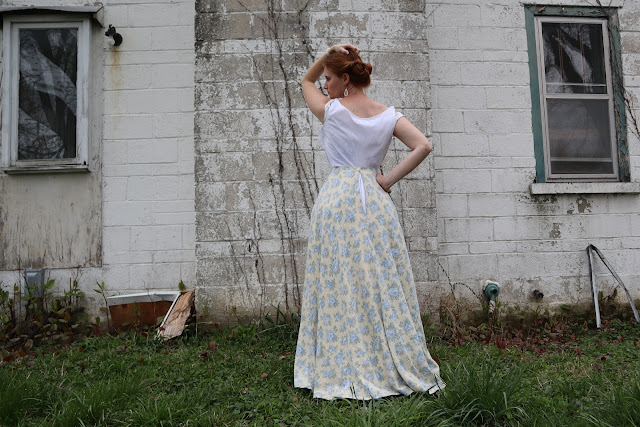 Once I squeezed my pattern piece out of the sheet, I sewed up the center back seam - the only seam this skirt has. A quick waistband was added, then the mock-up was tried on over the corset and hip padding. 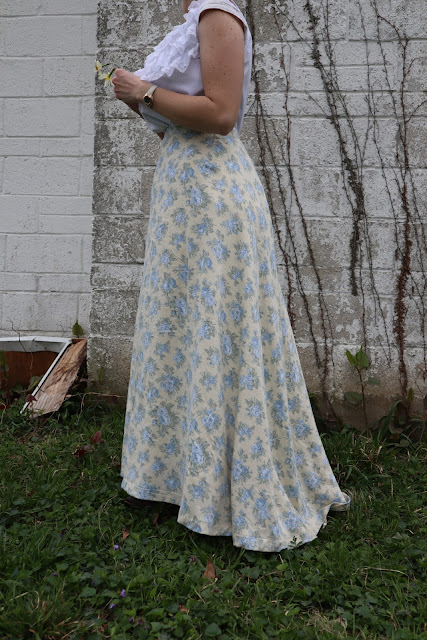 It fit!! It fit in both the waist and the hips and had an absolutely beautiful early Edwardian shape. Just what I needed! 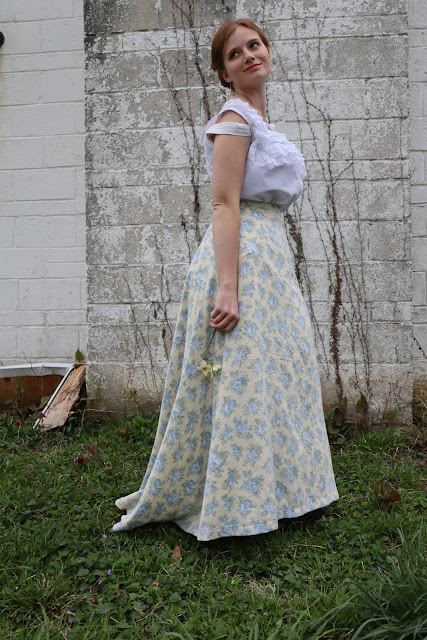 I decided this mock-up was good enough to be used as a petticoat, so I finished it off with a hem and a button on the waistband. 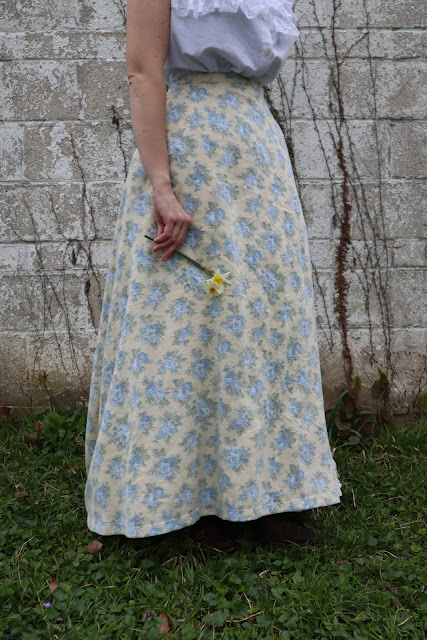 And with that, skirt pattern in hand, petticoat ready to go, it was time to get started on the actual skirt for my 1901 pink silk and fur evening gown. 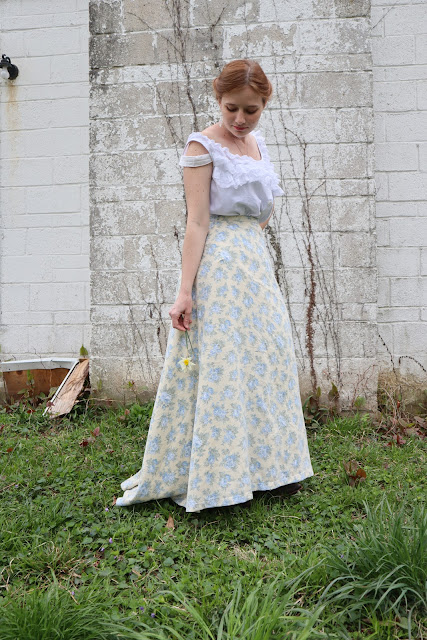