So many of my projects start with me finding a fabric I just can't leave behind, then designing a garment to turn the fabric into, in order to justify the fabric I just bought. This shirt was no exception. 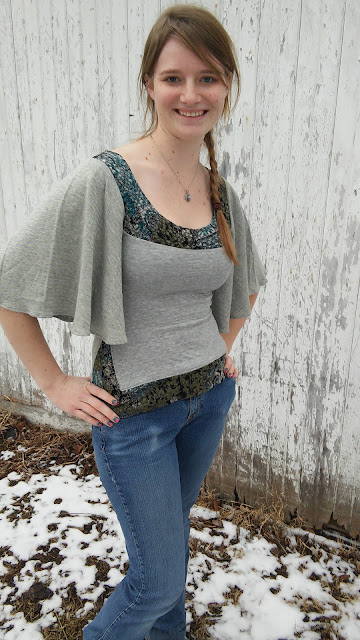 The fabric I had been admiring for a while, then during one trip to Joann's I saw that it had been clearanced. So I immediately got what was left on the bolt, about two yards. 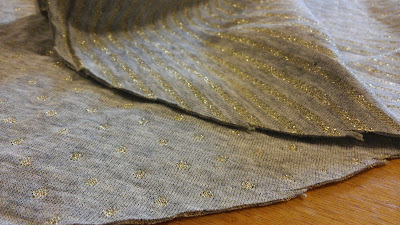 A soft grey knit with metallic gold stripes on one side and gold dots on the other. I really wanted to showcase both sides of the fabric in what ever I made and I thought a circle shirt, like this, would be a great way to do that. I decided some gold lace would be just perfect to set off the stripes and dots. Not wanting to spend too much more money on the supplies for this project, I stopped by a thrift store on my way home from Joann's that day to see if there was a garment with gold lace I could use. Well, there wasn't one. 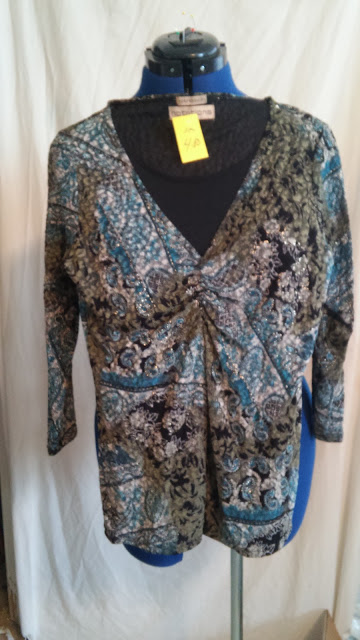 There was, however, this shirt. While not something I would typically wear, the paisley pattern of blue, green, grey, and metallic gold intrigued me. I could find a way to combine this shirt with my new fabric in place of lace!

This all took place several weeks ago. The shirt and fabric got stuck in my re-fashion bin and there they stayed. Finally, I had a few spare hours this past weekend, while waiting for my very pregnant goats to kid. Out my fabric came! 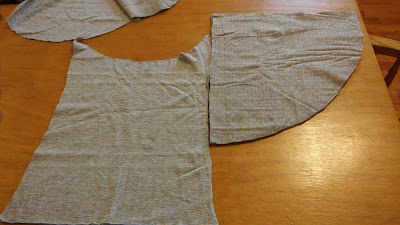 I used one of my favorite tank tops as the pattern for the body of the shirt. I cut two large half-circles for sleeves. Then, I chopped up the thrifted shirt. 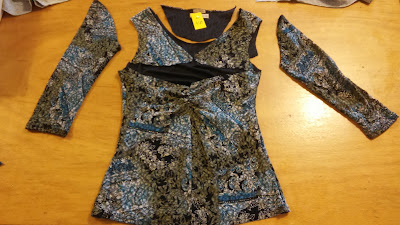 Well, it was supposed to be a circle shirt at least. I sewed the top of the thrifted shirt onto the body of my new shirt. Then I planned to sew the half-circles to the sides of the shirt body to make a large circle/oval shape, but halfway into sewing the half circles on I decided to go a slightly different direction. 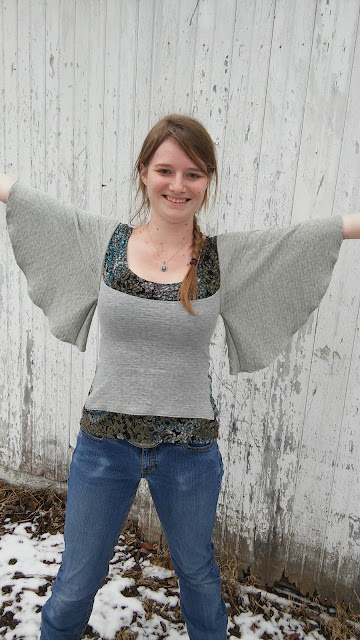 I sewed the half-circles around what would be the arm hole, then, rather that sewing the rest of the sleeves into the side seams, as I'd planned to do, I decided to sew up the side seams and the under arm seams separately, giving this shirt very distinct sleeves, rather than a poncho look.

Once I had the sleeves figured out, my shirt was about done, only two little issues that needed to be solved, first, it was a little tight and short through the torso. 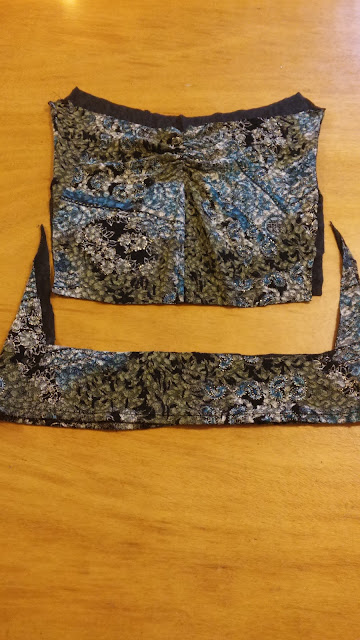 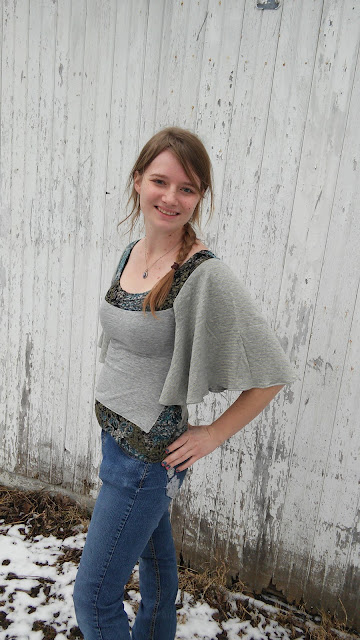 The second issue was the back of the shirt, it was just a bit too open for my tastes. So I made two straps out of the fabric scraps I had, then cris-crossed them across the open back. 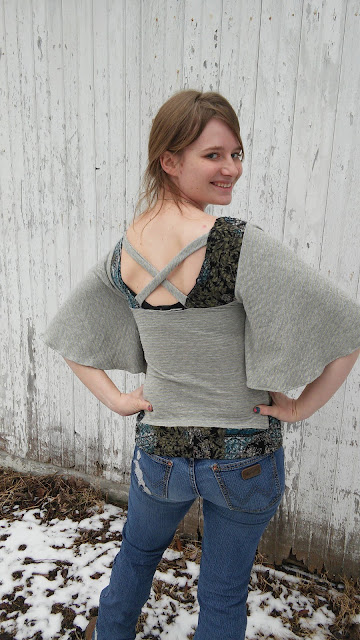 There, much more comfortable! This shirt took about an hour and a half to make, then it was time to check on the pregnant goats again. So I threw a coat on over my pretty new shirt and outside I went, to discover Genesis very close to having babies! 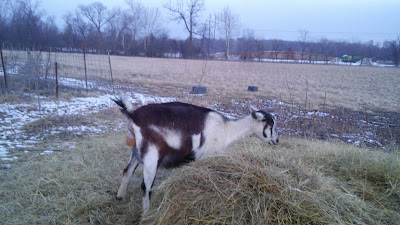 Genesis is a two year old, first time mama and she did great! First out was a little buck who looked exactly like his mama. My sister named him Exodus. He was soon followed by a doeling, named Truffle (to honor her Valentines day birth). 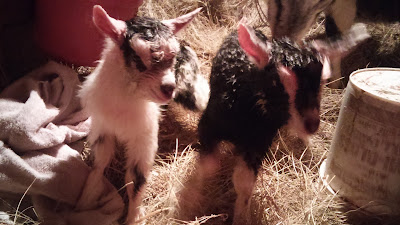 We quickly moved all three into a nice warm shed, and the babies didn't take long to figure out how to nurse. 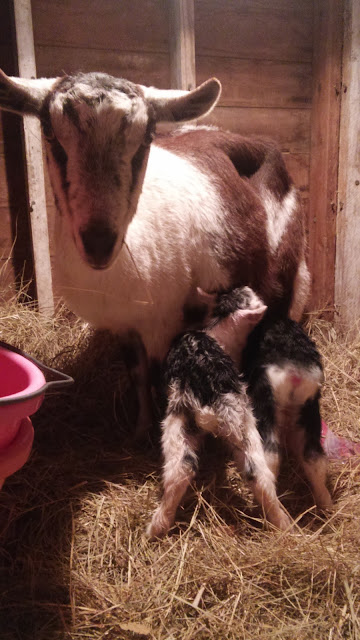 Now, hopefully all my kiddings this year go just as well as Genesis's did, and all my sewing projects come together as quickly and nicely as my shirt did! 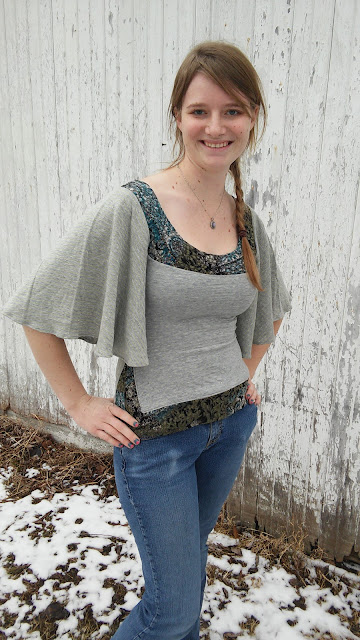 Well, ok, that second one might be pretty near impossible, but I'm still hoping for a smooth kidding season!