Around Christmas I decided I wanted a long sweatshirt/hoodie/sweater thing. I saw a girl wearing one somewhere and I decided it looked really comfy, so I wanted to make one. I made a long cardigan by refashioning a sweater dress, but that wasn't exactly what I was wanting. I found a thick sweatshirt knit fabric at Joann's that would be perfect for the project. 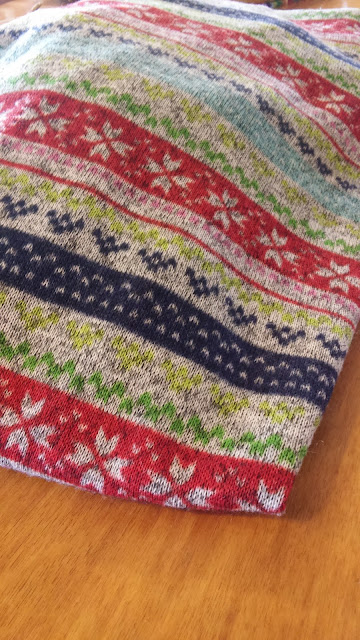 Actually, this is the same type of fabric as I used to line my brother's camo jacket, just with a fun sweater-esque print. It looks like sweater knit on the outside and is fuzzy like a sweatshirt on the backside. I used a Joann's gift card (given to me by my lovely aunt for Christmas) to get the fabric, then got to work.

I adapted the pattern I used for my brothers' camo jackets, McCall's M6614 to make my sweatshirt/hoodie/sweater thing. I just lengthened the pattern all around and curved the bottom of the front pieces some. 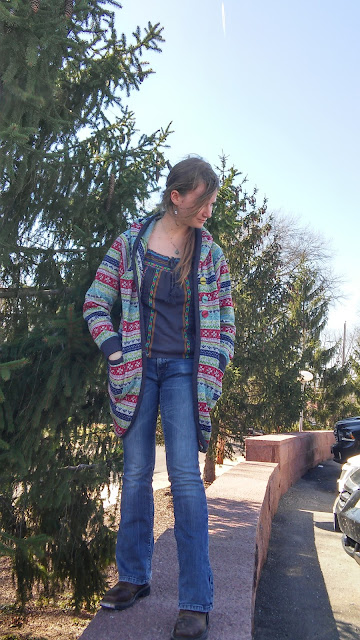 I used the leftover lining fabric from my brother's jacket to trim my sweatshirt with. I whipped  my sweater up one evening in January, and happily wore it the next day. I promptly discovered it needed pockets. So, when I got home that day I add two large patch pockets. 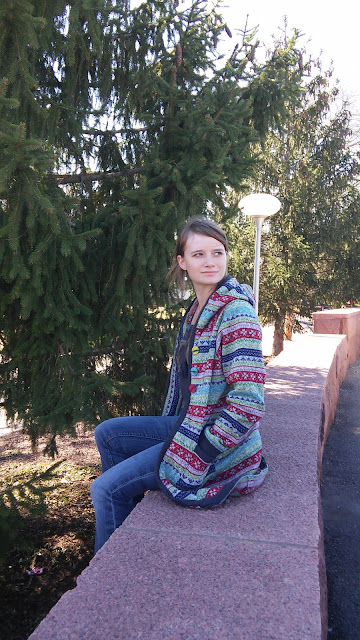 After wearing my sweater/sweatshirt/hoodie thing a few more times I decided it needed to button up the front. Despite my rather large button collection, somehow I had none that looked quite right for this. I wore the sweater as it was, button-less, to Indianapolis last month with my mom and brother. 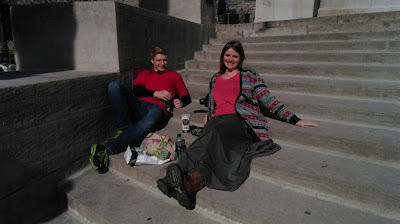 While there my mom and I went to a couple fabric stores. In one I found the perfect, large, colorful, buttons. So, I bought three, a blue, a red, and a green, brought them home, then, finally, got them sewn on (between baby goats arriving) during the first week of kidding season. 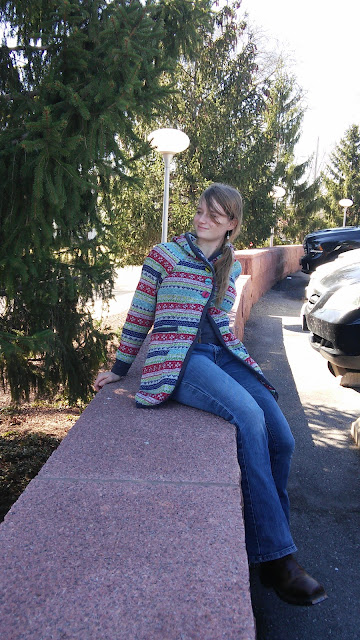 I love how the buttons finished off the sweater/hoodie/sweatshirt! I thought I wore it plenty before I sewed those on, but now that I actually have a way to close up the front of my sweater, I wear it so much more! 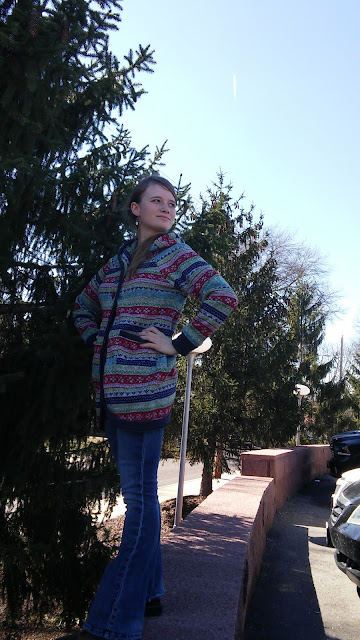 This was definitely a project worth making! It's perfect for wearing on days when I have run a bunch of errands, and really don't want to be bothered with a heavy coat, but need something to ward off the cold during the dash from the truck to the building. (my awesome sister took these pictures for me at the Library on one such day last week)
At this point I have plenty of shirts, skirts, and dresses in my closet, so I really don't need to make anymore of those, and I'm not to the point where I want to attempt to sew my own jeans, so outerwear is a good choice for sewing projects. What else can I sew in that category? I will have to figure that out. . .

Posted by Alyssa at March 07, 2016
Email ThisBlogThis!Share to TwitterShare to FacebookShare to Pinterest
Labels: Me, Sewing