The Historical Sew Monthly challenge for November was "Purses and Bags". My first thought for the challenge was I could make a carpet bag. That would be a really cool project!! 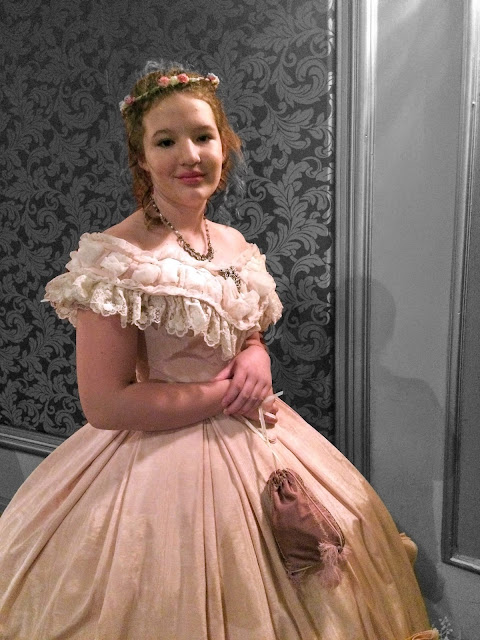 A reticule is a small purse. They came into fashion in the regency era, when skirts became slim and hard to hide pockets in, and remained common for at least the next 70 years, into the 1860's. Eventually they morphed into our modern purses. A lady must have a way to carry the essentials, and if her clothing doesn't thoughtfully provide her with that necessity, than she must carry a separate pocket of sorts. Thus, the reticule. 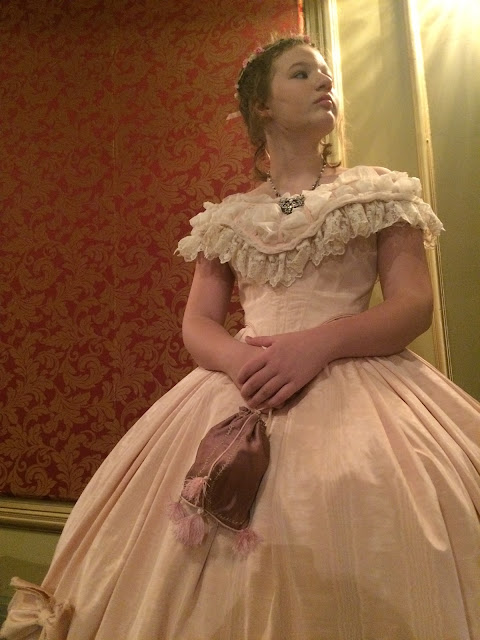 Now, pocket-loving me did not put any pockets in the skirt of the 1865 pink and lace ball gown. (Yep, I kind of failed there.) Thus, I decided to make a reticule to go with the dress instead. A pretty little bag my sister could carry with her while wearing the ball gown. A place to stash her necessities - the things she couldn't be left without while waiting backstage for her scenes in the play. Specifically, since my sister has type 1 diabetes, her blood sugar checking kit. Yes, a reticule would be the perfect thing to store that essential in for the duration of the play. 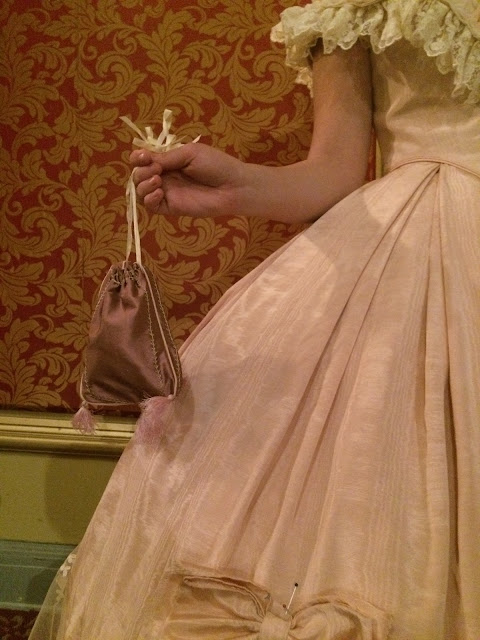 Once I decided I was making a reticule, I had to figure out what it would look like. What shape should it be? How should I embellish it? What fabric should I use? 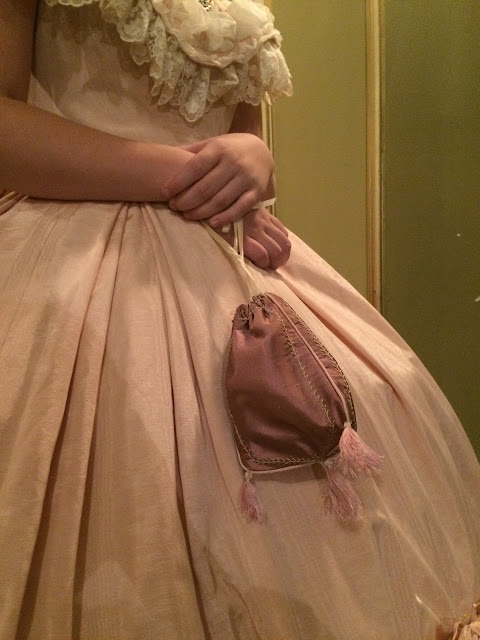 I began by looking at pictures of reticules from about 1830 to 1865 (the year the ball gown was from) on Pinterest, and stumbled upon this reticule pattern. It was from a book published between 1831 through 1865, making the design plausible for an 1865 reticule. Thus, I used the instructions and drafted my reticule pattern. 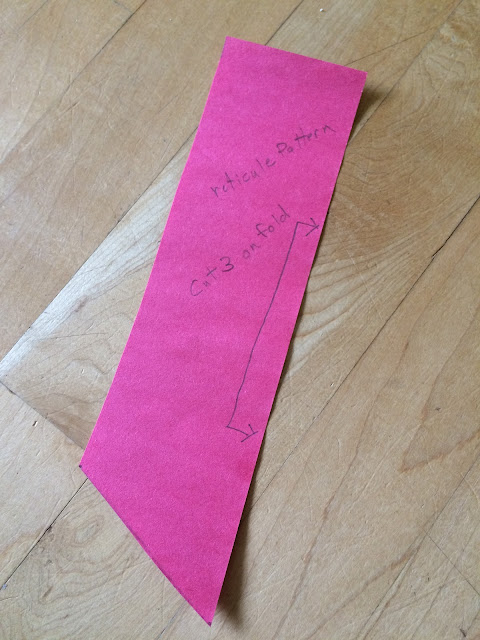 With the pattern figured out, I moved on to finding materials. Silk would be an accurate fabric choice. Luckily, I had recently stumbled upon a scrap of pink silk dupioni in my fabric stash which coordinated perfectly with my ball gown fabric. So I pulled out that scrap, a bit of lightweight floral cotton canvas to back it with (looking back I should have used something lighter than canvas, like a quilting cotton, or even a cotton lawn, for the interlining, as the canvas is bulky and stiff.), and a scrap of striped cotton for lining. 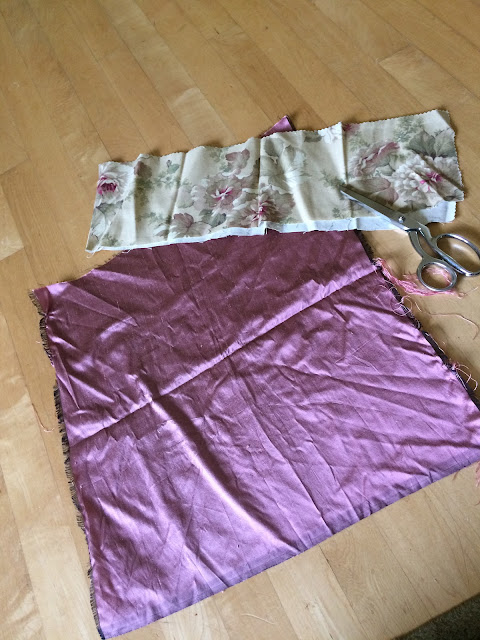 I cut the pattern out of both the silk and the canvas, then basted the two together. 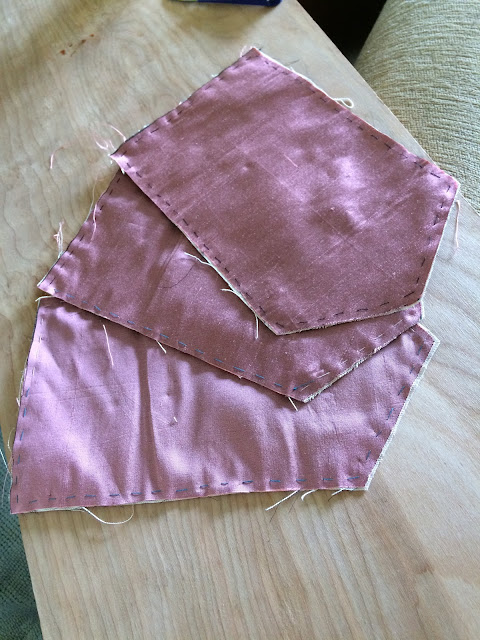 Then it was back to the question of embellishment. Reticles were often fabulously embroidered, but I didn't have the time, skill, knowledge, or patience for anything too elaborate. So I searched for period examples of reticules with simpler decoration. I found a drawing of a reticule with just three simple lines of embroidery on each panel in Costume in Detail by Nancy Bradfield, and decided to base my reticule embellishment on that. 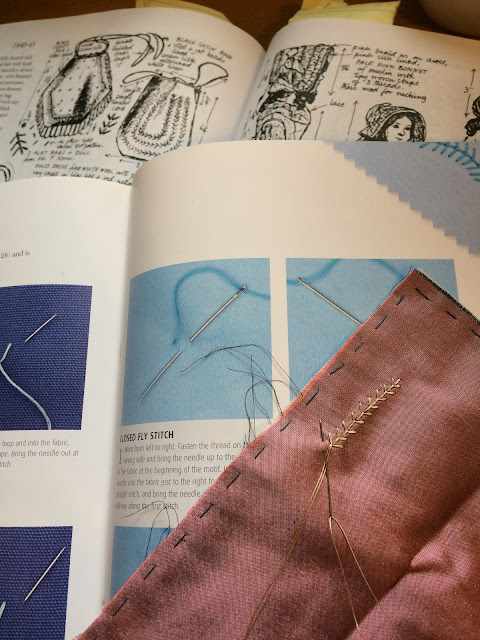 I found instructions for a similar looking embroidery stitch in (possibly my favorite sewing book of all time) Handsewn by Margaret Rowen, and worked this stitch, called a fly stitch, all the way around each of the three panels. Once that was done, I decided one row of embroidery per panel was enough, so I moved on to the other embellishment - tassels! 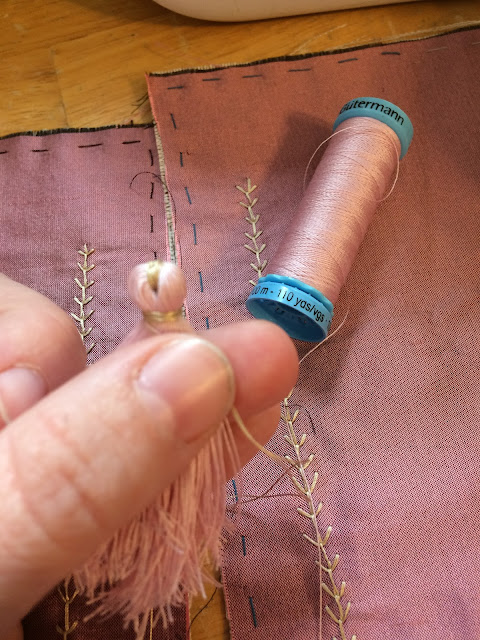 I made the tassels by wrapping pink silk thread tightly around a sewing machine needle case - just the way you would wrap yarn around a book to make a yarn doll. 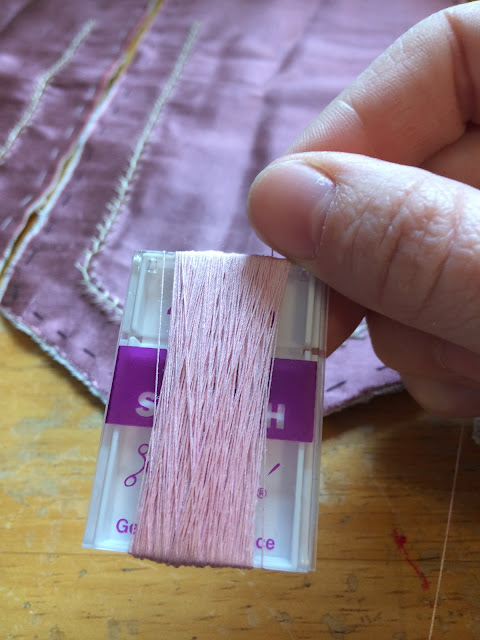 I tied all the threads together at one end using tan silk thread. 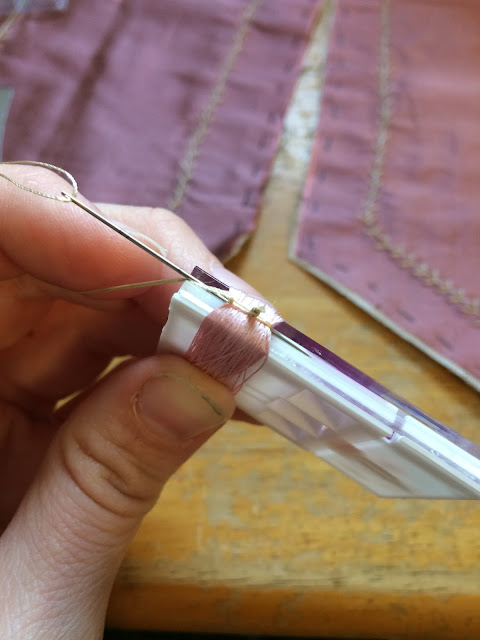 Then cut the threads at the other end using a craft knife. 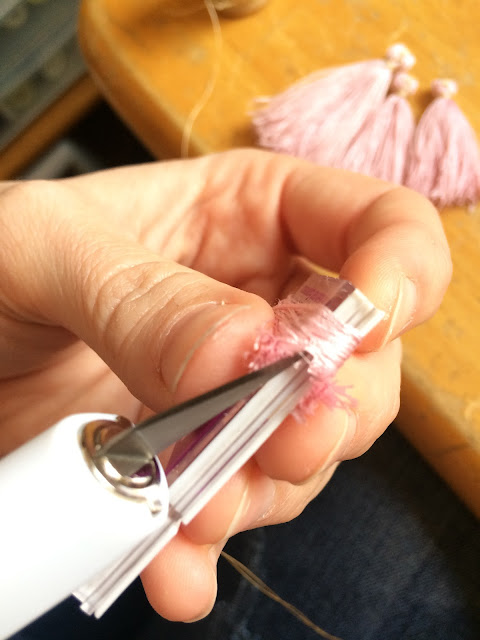 I tightly wrapped more tan thread around the top of the tassel, and then it was done. 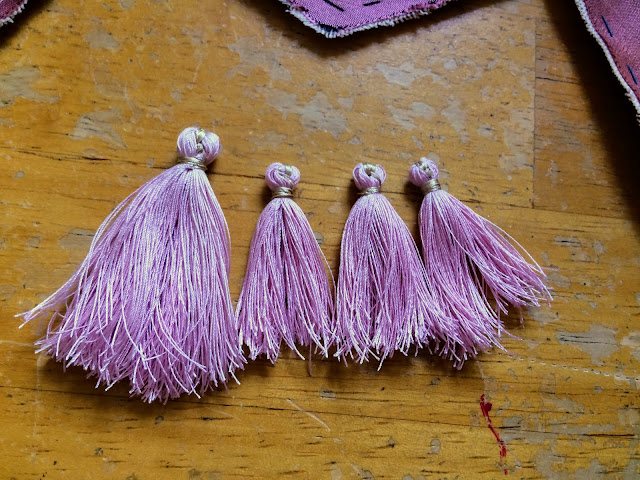 I made four tassels, three small and one slightly larger, to be sewn onto the bottom of the reticule. 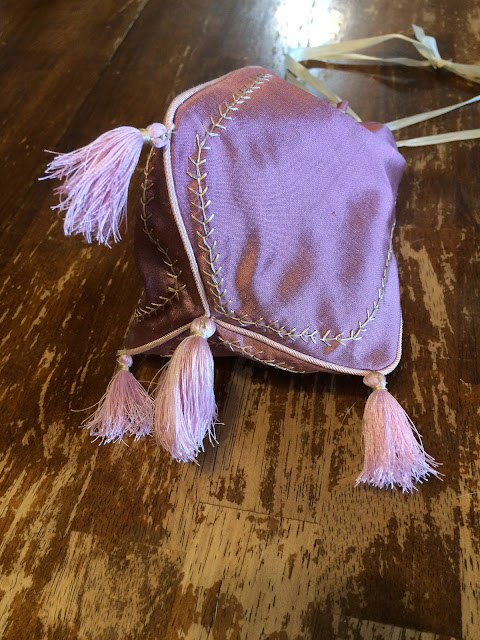 Once the tassels were done, it was on to construction! The reticule is comprised of three panels and I decided to pipe the seams between each panel with pink moire fabric left over from the ball gown. 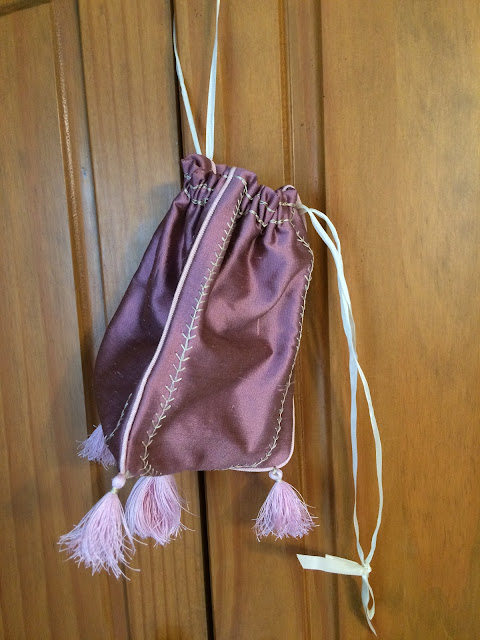 I used a chain stitch all along the top edge of the reticule to make a channel for the drawstring. 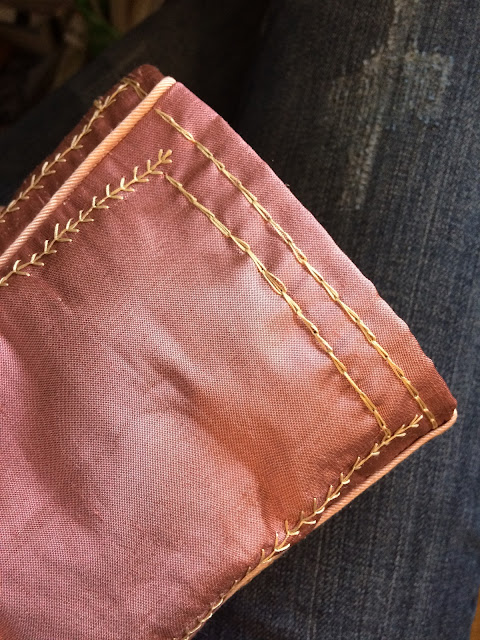 I inserted a bit of rayon ribbon into the casing, tied it off, and the reticule was done! 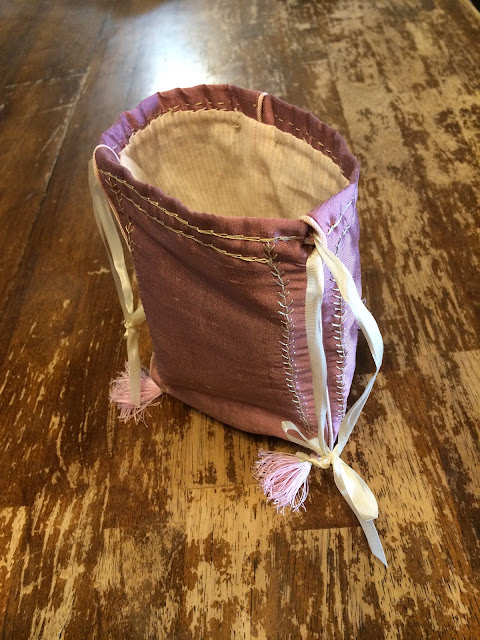 A little silk bag - a 19th century appropriate way to deal with a lack of pockets in clothing! 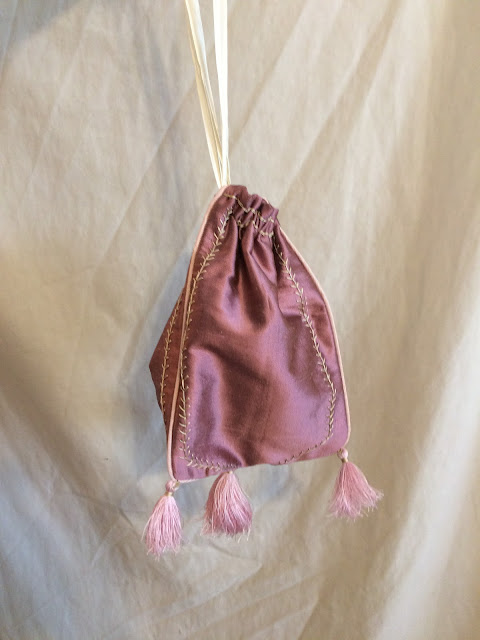 And a pretty looking accessory - just right for finishing off the ball gown look! 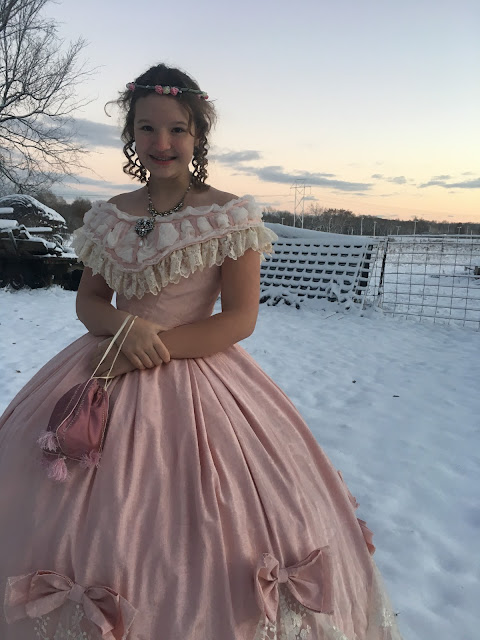 Challenge 11: Purses and BagsWhat the item is: Embroidered Silk Reticule
How it fits the challenge: A reticule is a purse
Material: silk main fabric, cotton lining and interlining, mystery fiber moire for piping

Pattern: One I found online, apparently from a period pattern: https://worldturndupsidedown.blogspot.com/2009/10/reticule-pattern-from-1831-1865.html

How historically accurate is it? The pattern is accurate, the embroidery is plausible, construction is all by machine, so not accurate. Materials are all accurate with the exception of the rayon ribbon, moire, and polyester thread.

Hours to complete: Around 8

First worn: November 19th for the "A Christmas Carol" cast photo shoot at a local theater. (The reticule was done weeks in advance, but dress wasn't completely finished until about a week after the photo shoot! Look closely at some of the pictures in this post and you'll see straight pins holding the dress together!)

Total cost: Almost Everything was from stash, remnants of previous projects. The only thing I had to buy was the pink silk thread for tassels, and that cost $2.50 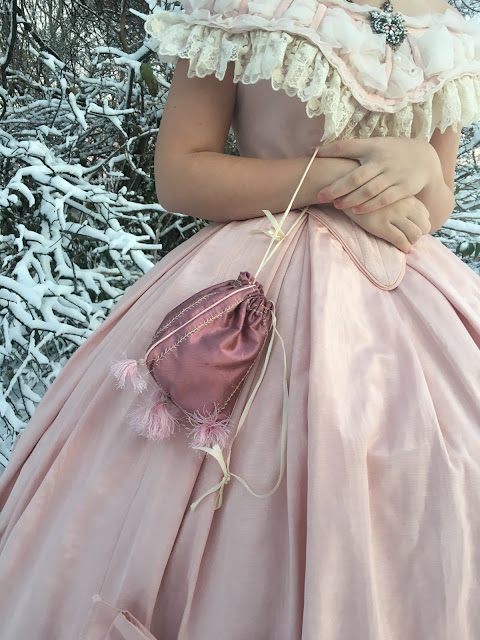