My sister almost didn't get a Christmas dress this year. 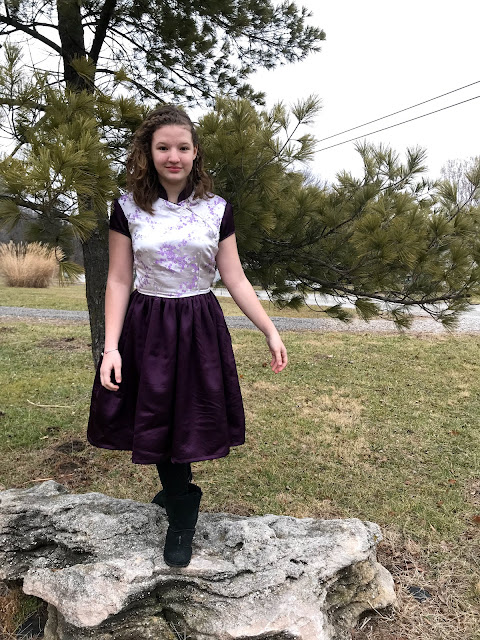 It's not that she didn't want one - she most definitely did. 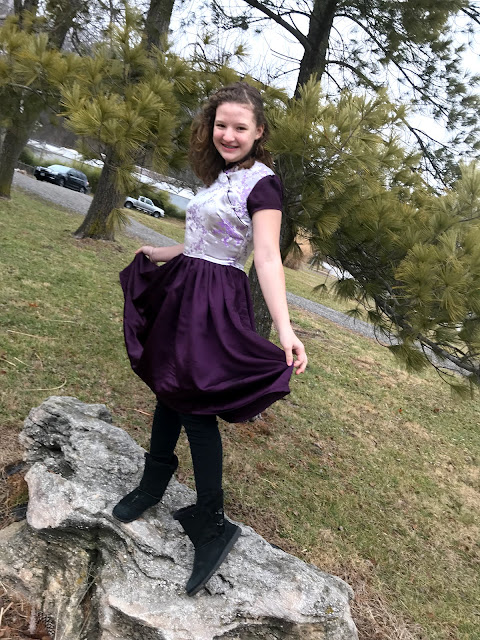 It's not that I didn't want to make her one. I did - it's a tradition. 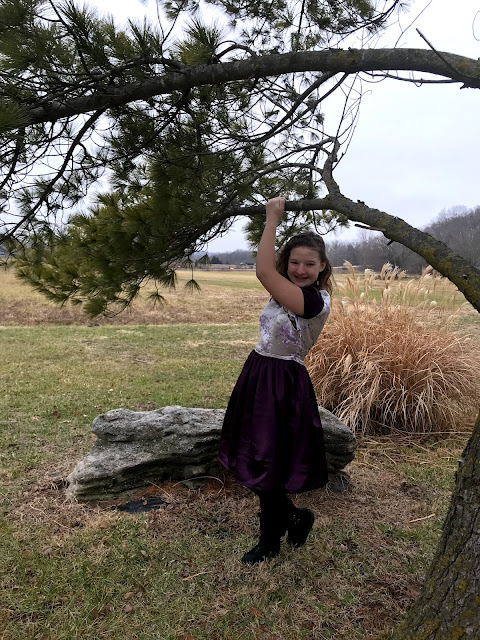 It's not that we didn't have a design for the dress - oh no, my sister's had it planned for months! 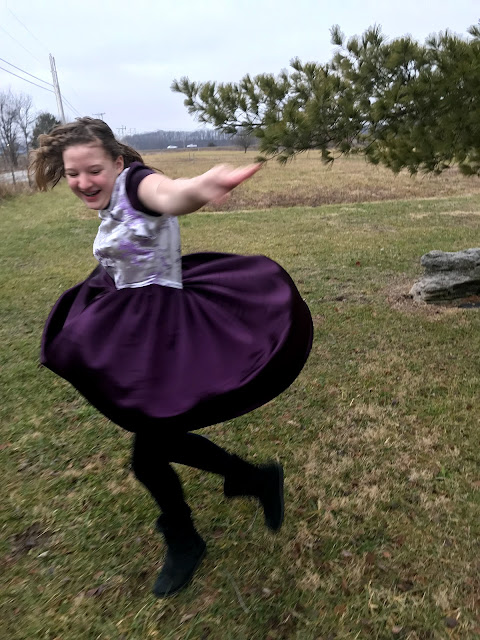 No, it all came down to time. Let me give you a rundown of the weeks leading up to Christmas. 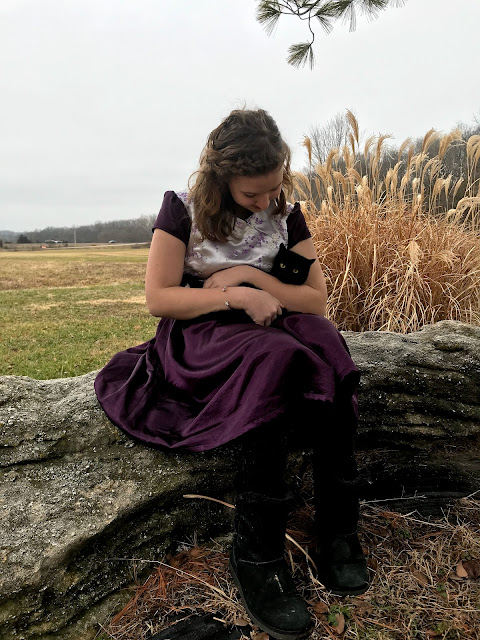 Week One of December was tech week/dress rehearsal week for "A Christmas Carol". I worked during the day, spent every evening at rehearsal, and found myself doing costume adjustments, mending, and yes, even a bit more constructing, at each rehearsal and every morning before work. I'd planned on beginning to sew Christmas gifts that week - but the play required almost every bit of my spare time (even though I thought, going into the week, that all the costumes were done, complete, organized, and ready to shine on stage.) I learned that week the costume coordinator's job is never done - not until the final performance is over, the set is struck, and the costumes are all returned to the original owners or stored away. 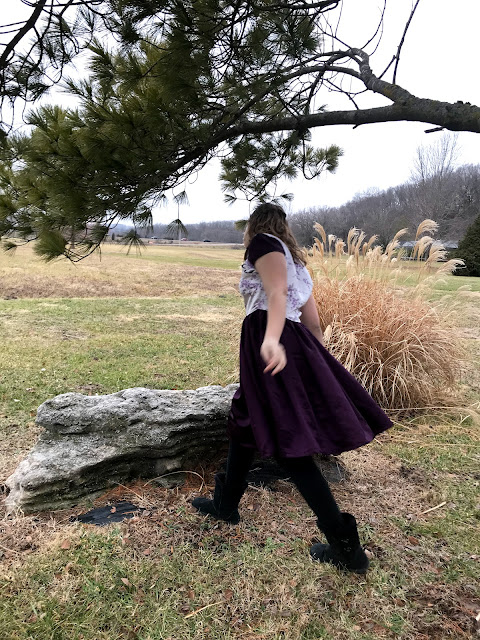 However, I did, amazingly, manage to get a couple things done on this dress that week. I bought the pattern (Butterick B6483), bought the skirt fabric (Casa collection "Ember" hammered satin from Joann's), and I even got the bodice cut out one afternoon while at work! (The bodice fabric, by the way, was a half-yard remnant of polyester brocade found in my fabric stash. I have no idea where it originated, but my sister loved it and there was just barely enough for the bodice!) 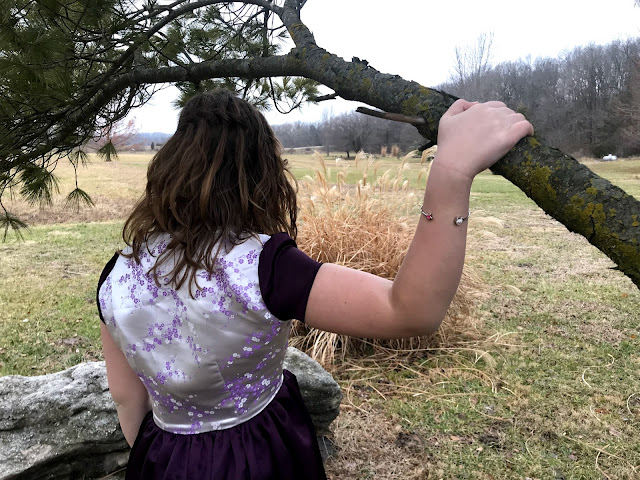 Week Two of December was spent getting ready for the first family Christmas gathering of the year. I spent the week sewing gifts for my Aunts and Grandma. I'd wanted to get my sister's Christmas dress done that week too - so she could wear it to the gathering over the weekend. But, by the time I finished sewing and wrapping all the gifts, I had no time left to make the dress. 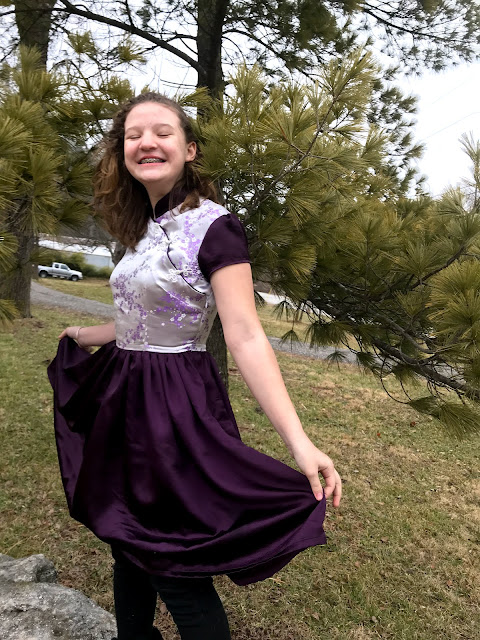 However, I did get the skirt, sleeves, and collar cut out of the purple satin that week. (The original plan was for the collar and sleeves to be cut from the brocade, unfortunately, there wasn't enough fabric for that.) 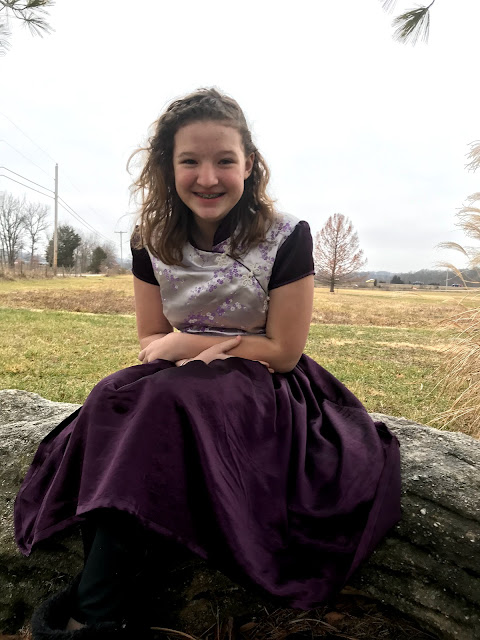 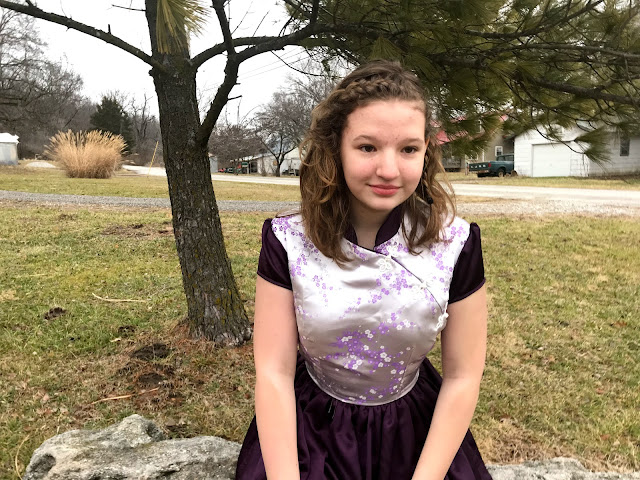 I met my goal, and no Christmas gifts were sewn in the middle of the night. This dress however, was another story. 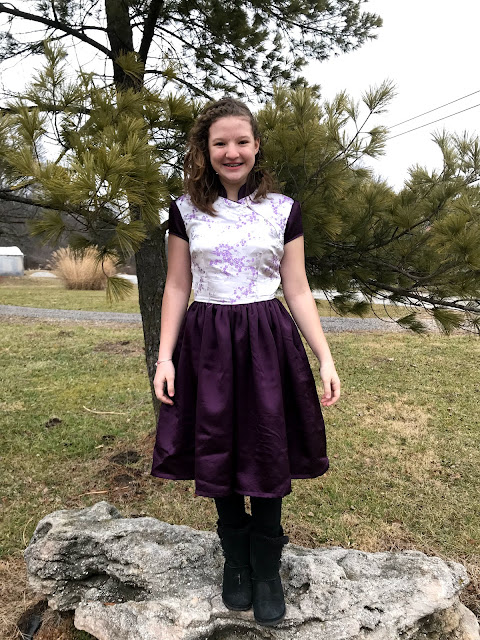 By Thursday of that week I began to doubt I'd get the dress done at all for the Christmas season. I didn't see where I would find the time to do it. 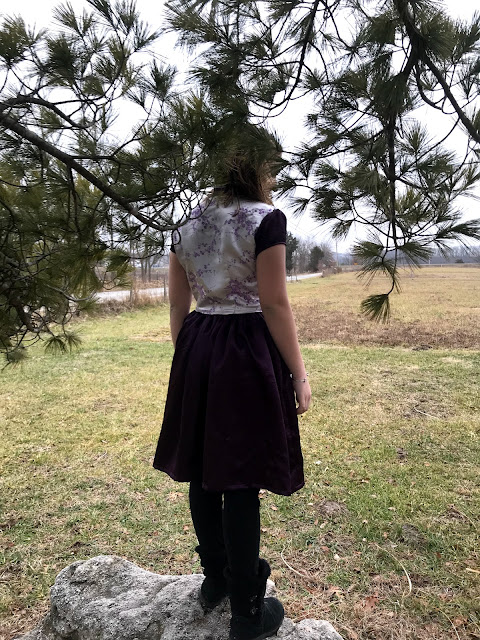 Then Friday I decided, gosh darn it, my sister was going to have a Christmas dress! I was going to make it happen. So I bought a zipper for the dress - and worked a 10 hour day so I had no time whatsoever to sew during the day and was much too tired in the evening. 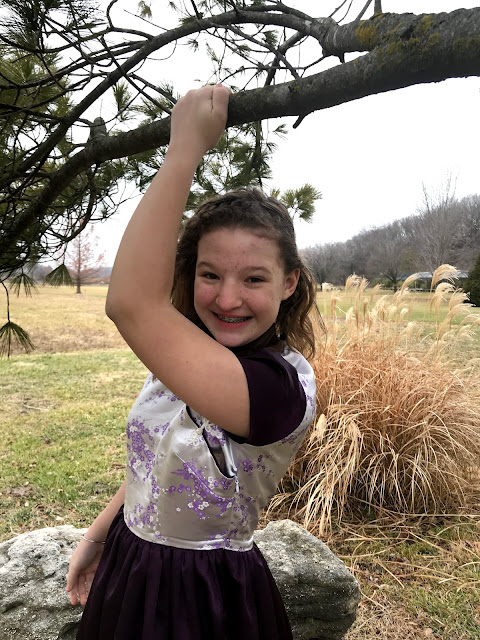 Thus, Saturday would be the day the dress would happen. I would finish this dress before going to bed Saturday night and my sister would be able to wear it to church the following morning - the last Sunday before Christmas. 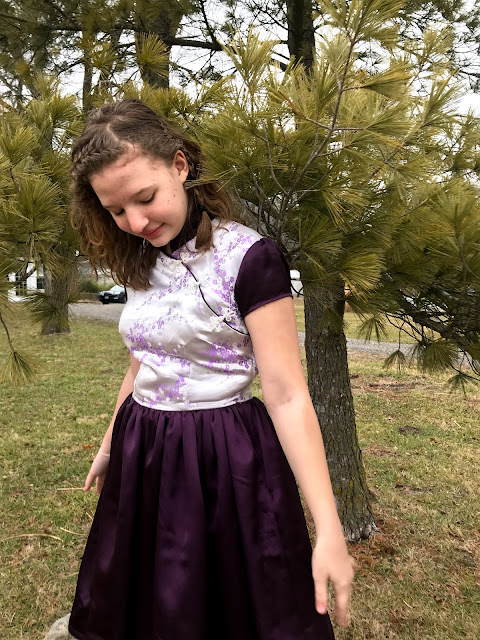 Saturday morning I'd volunteered to help out with a Christmas event, so the sewing couldn't begin until late afternoon. Once I was done with my volunteering duties, I went to Hobby Lobby to buy the frog closures for the dress, then I headed to my Christmas workshop and began making the dress in ernest. 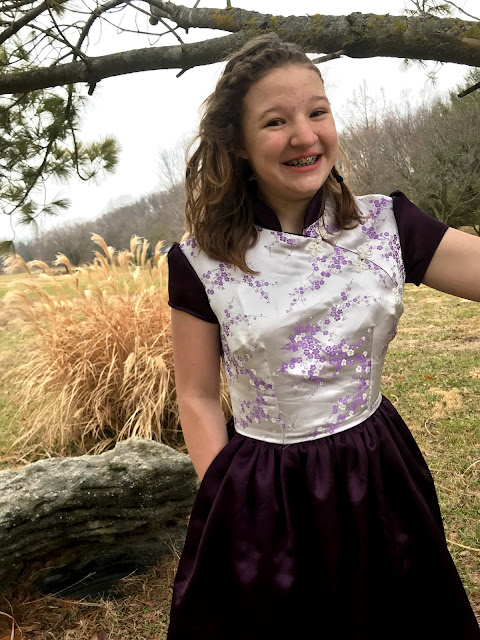 I began sewing around 5 p.m. I took a break to eat dinner. I went back to sewing. Surly the dress wouldn't take too long to make! 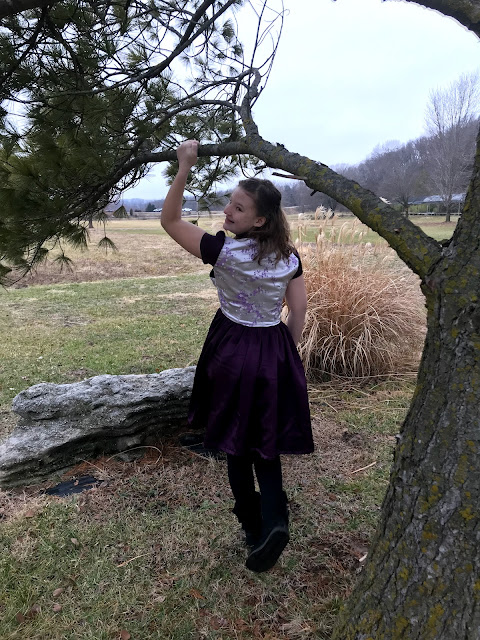 I sewed and sewed. I figured out how to do the closure with the side seam zipper and the frogs across the front. 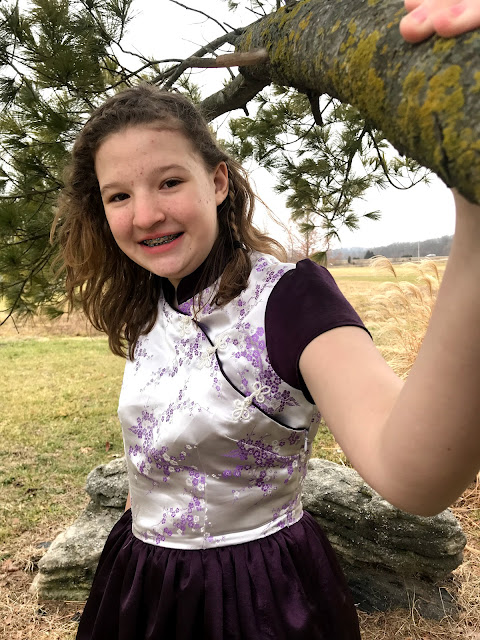 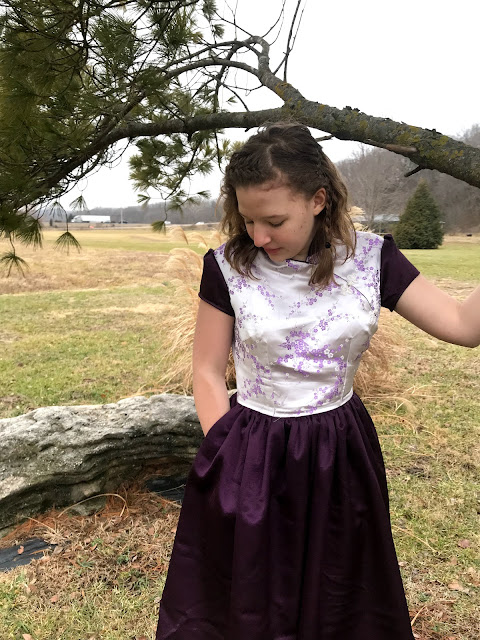 I got up and glanced at the clock - 2:30 a.m. The dress was done. My sister could wear it to church the next morning, to Christmas eve service the day after that, and for whatever other Christmas gatherings were still to happen. 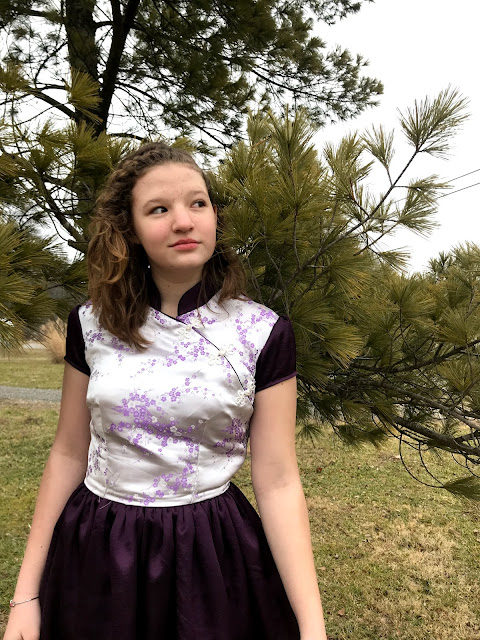 The dress was finished. The tradition of a Christmas dress had been upheld. I went to bed, hoping the dress would fit my sister the next morning. 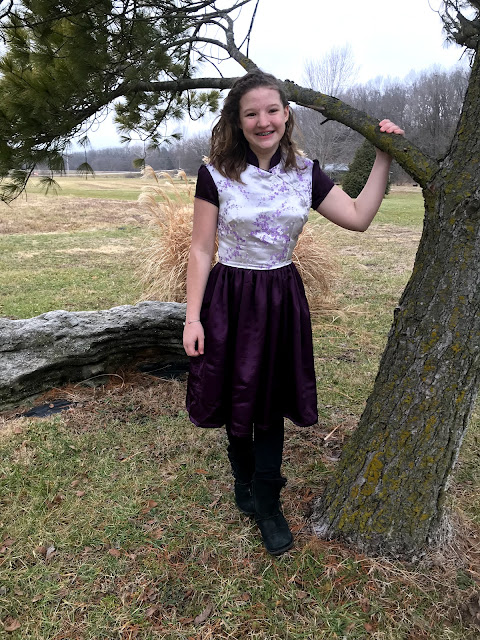 The next morning I woke my sister up with the Christmas dress. She immediately put it on, and it fit perfectly! I breathed a huge sigh of relief!! 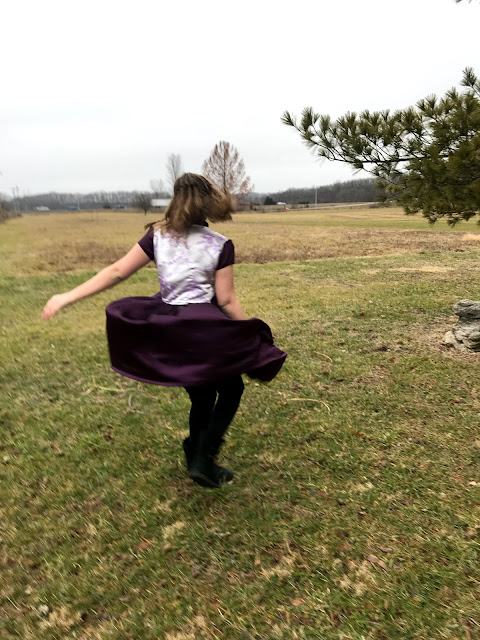 My sister loved it - she'd designed it after all! And she's worn it plenty since I finished it! 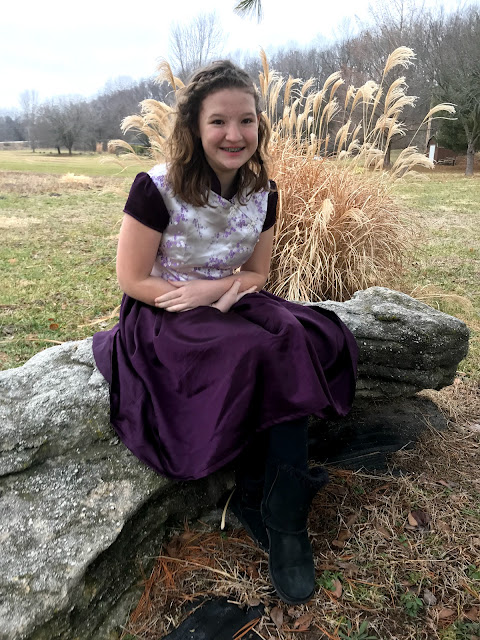 This was a Christmas dress worth making! Despite the fact it was the only Christmas-related thing I had to stay up late to make this year, I don't regret it at all! 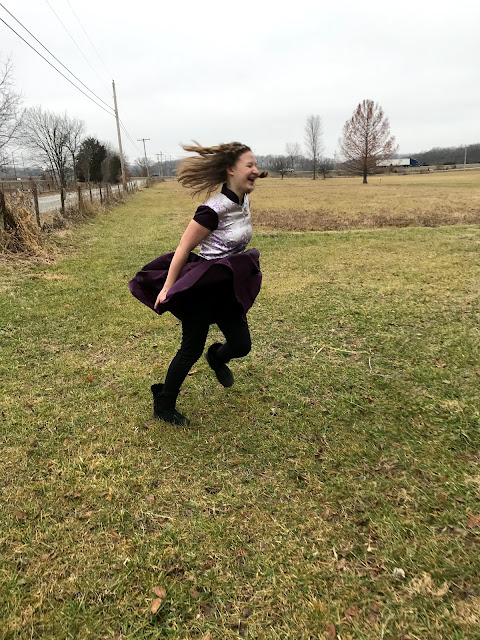