The Mid-19th Century Wrapper to Hide the Ball Gown

For a couple weeks over the summer I became mildly obsessed with mid 19th-century (1840's-60's) wrappers. A wrapper is an informal, full-length, front-closing garment a women would have worn in the morning, over all her undergarments (corset, petticoats, hoops, and the like), before getting dressed for the day in her nicer clothes. A wrapper was easy to put on and could be worn for house work and basic farm chores - it was essentially a house dress. They were often made of cotton, but could also be made of wool or silk.


I searched out 1840's, 50's, and 60's wrappers online and studied every picture. I wanted to know how they were each constructed, what materials they were made from, and how they were trimmed. The more I went down this rabbit hole, the more I wanted to make my own. Thus, I began to keep my eyes open for suitable fabrics for the project - not really knowing when this project would take place.

The clearance rack at Joann's yielded a bolt of fantastically brightly colored brown calico, which would work splendidly for a mid-19th century wrapper. I purchased some green striped cotton, also found on the clearance rack, to use for trim, and I was all set to make a wrapper - when ever I found the time or a very pressing reason to do so. 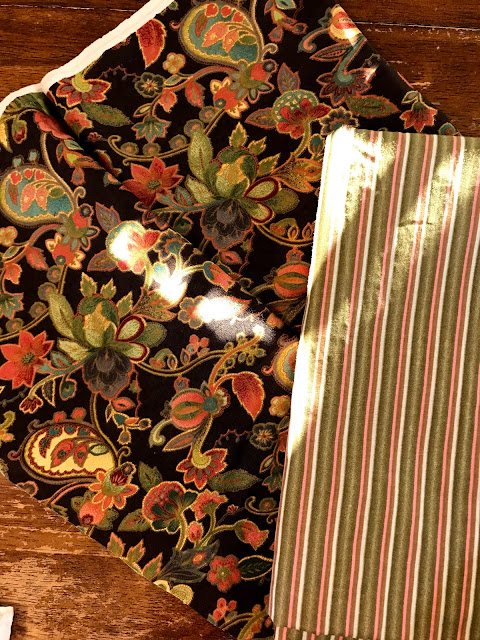 The reason came when my little sister was cast as a Caroler in "A Christmas Carol" - after already being cast as Mrs. Fezziwig of Fezziwig's ball.  Yep, she was double cast and would need two seperate costumes - the ballgown, and some sort of a caroler outfit. 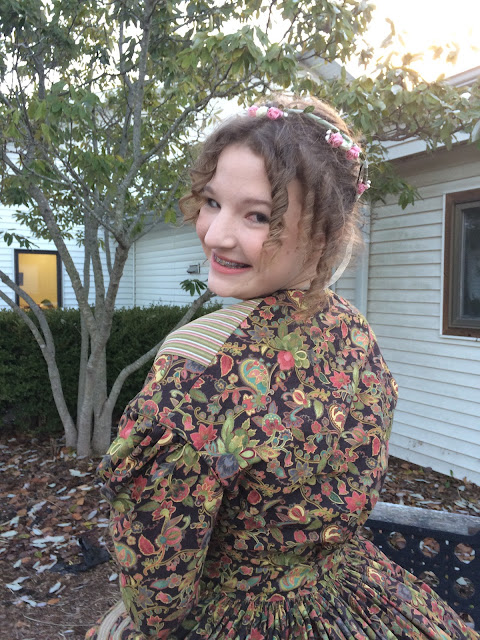 The logistics of doing a quick costumes change into and out of the ball gown made my head spin. (Hook and eye closures do not lend themselves well to "quick".) I soon decided the caroler outfit would need to be something my sister could just throw on over the ballgown. Well, a wrapper typically opens all the way down the front, with buttons from neck to hem. Along with that, a wrapper is not a closely fitted dress, rather, the size of the finished garment is somewhat adjustable thanks to ties and sashes. A wrapper could be easily slipped on over a full set of 1860's undergarments, a partial set of 1860's undergarments, or a ballgown. Thus, the 1860's wrapper I'd been planning and buying materials for would happen, a bit sooner than I'd hoped and anticipated - all because my sister needed a caroler costume. 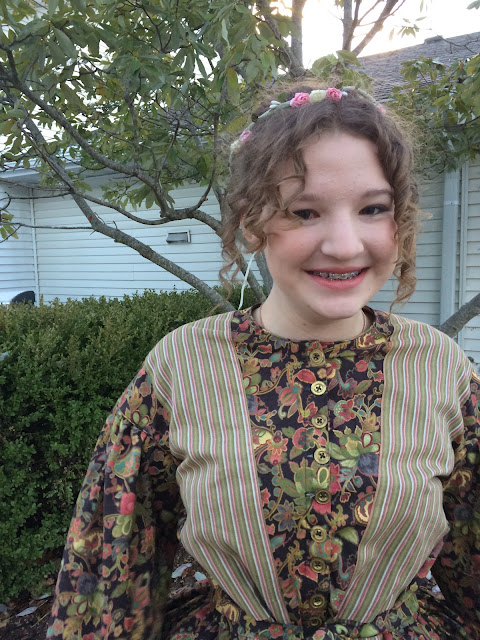 The wrapper would need to be done in one weekend. There was no more time to be found in the weeks leading up to the play. I had the materials for the project, but that was all I had. I didn't have a pattern, and I only had a vague idea of how wrappers were constructed. Those details had to be figured out before I could seriously begin making this thing. So I took to the internet again and looked through all the blog posts I could find about making 1850's and 60's wrappers. Several years ago Romantic History shared several detailed posts about the making of her 1860's wrappers, which I found very helpful to read in preparation for this project. Probably the best resource I came across, however, was the blog All The Pretty Dresses. Here I found all sorts of pictures of extant mid-victorian wrappers - both internal and external views - which helped me greatly!

After an hour or two of reading and looking at pictures I had a plan and was ready to jump into making this wrapper. 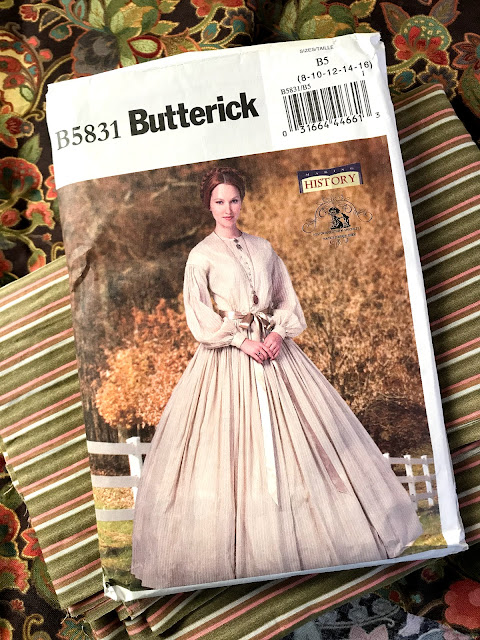 As for a pattern, I decided to start with Butterick B5831, already in my pattern stash.  It had just the 1860's bodice I needed - a lining fitted with darts and loosed, gathered, outer bodice. The perfect base for a wrapper. 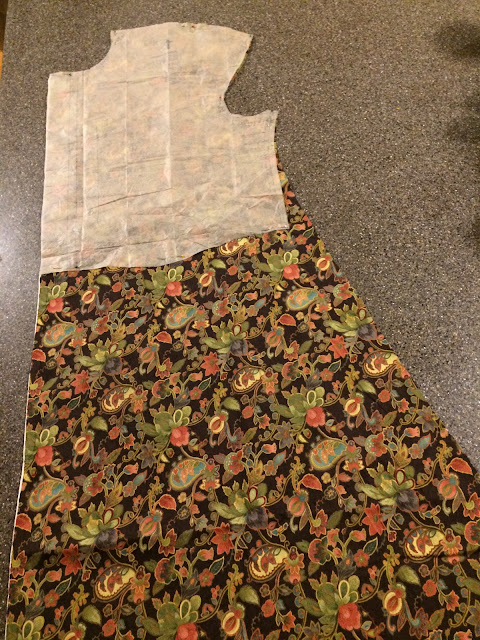 Many 1850's and 60's wrappers had the front cut as one piece from shoulder to hem - no waist seam, no separate bodice and skirt. So that's how I cut mine. I used the front bodice piece from the Butterick pattern for the top of my front. I figured out how long the skirt would need to be and measured and marked that distance onto the fabric, from the bottom of the bodice pattern piece. Then, starting just under the arm hole, I cut a long side seam at an angle, all the way down to my marked hem. 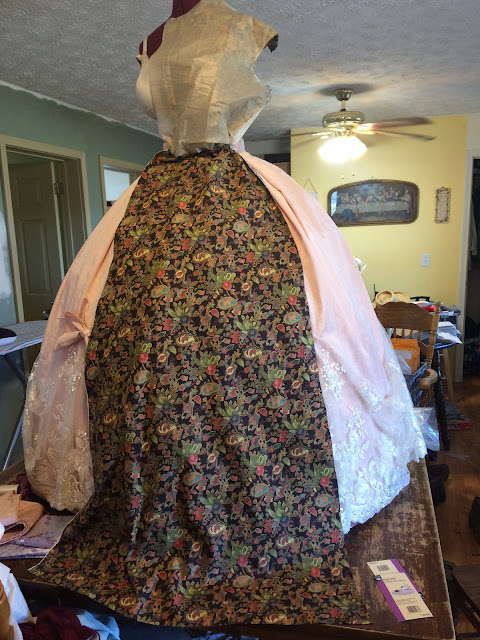 The back pieces were cut out exactly according to the Butterick pattern - they required no changes. A slightly gathered over bodice over a fitted lining, with a partial waistband, which would be attached to gathered skirt panels at the waist. 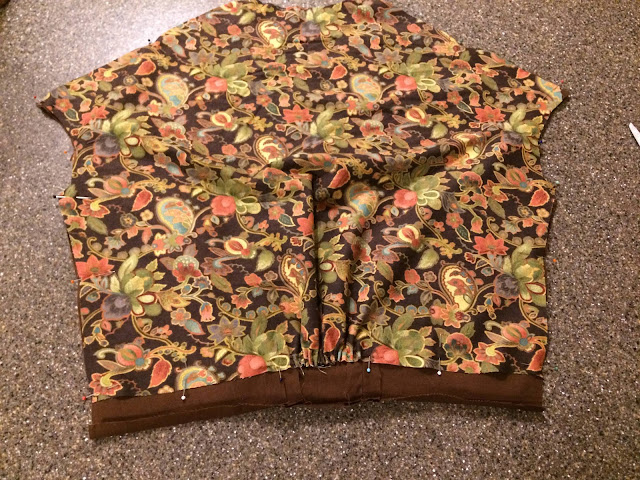 The skirt was cut to be two full-widths of 44" fabric wide, and cartridge pleated down to fit onto the back bodice. 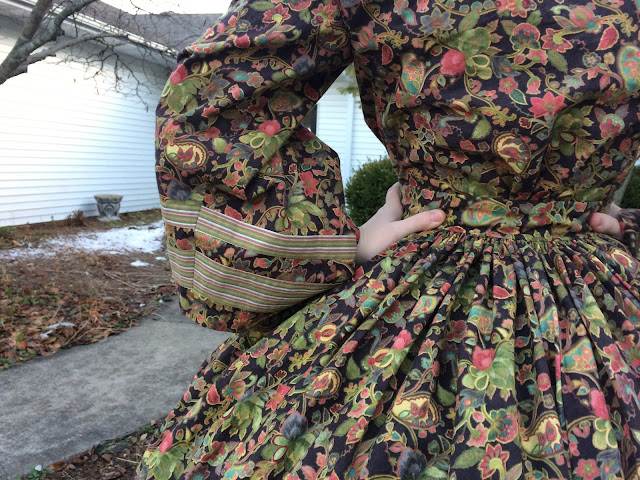 Due to my limited time frame for this project, corners had to be cut, and I did a lot of thing I normally would have done by hand on a historical project, by machine. Cartridge pleats however, were one thing I was not willing to compromise on - they just look so much nicer than machine sewn gathers! 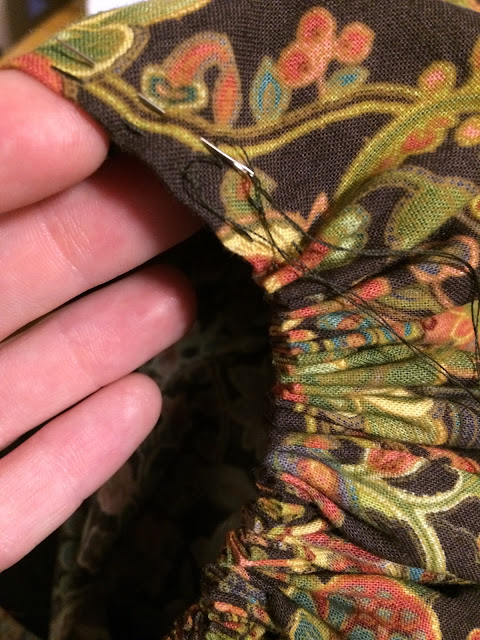 By contrast, I sewed on all the trim and did all the buttonholes by machine - something that would not have been done in 1860 at all! 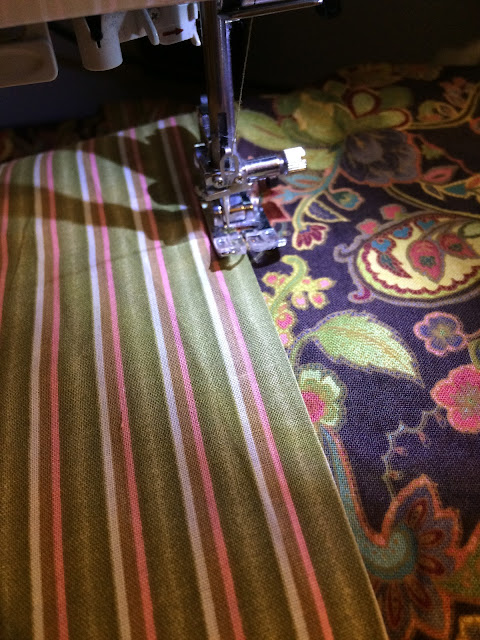 Now, speaking of trim, I loved the angled strips of trim, from shoulder to hem, as seen on this 1840's wrapper, and others from the 1840's-1860's. (such as the brown silk wrapper pictured at the beginning of this post).

So that's the trim design I replicated on my wrapper, using strips of green striped quilting cotton. 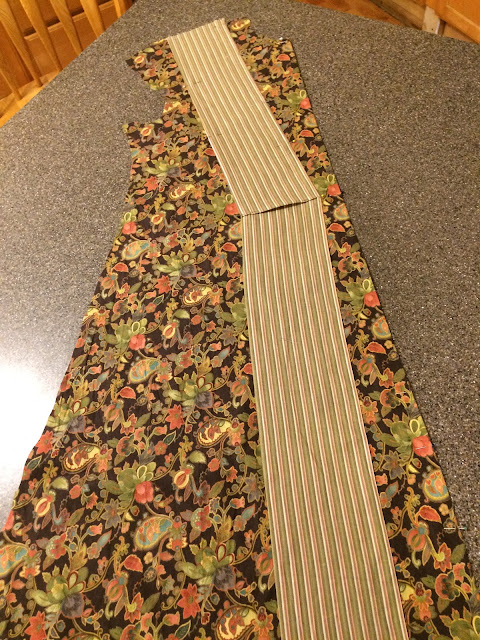 It took multiple tries for me to get the angles of the trim just right, and replicated on both halves of the front, but eventually, I was satisfied with it. 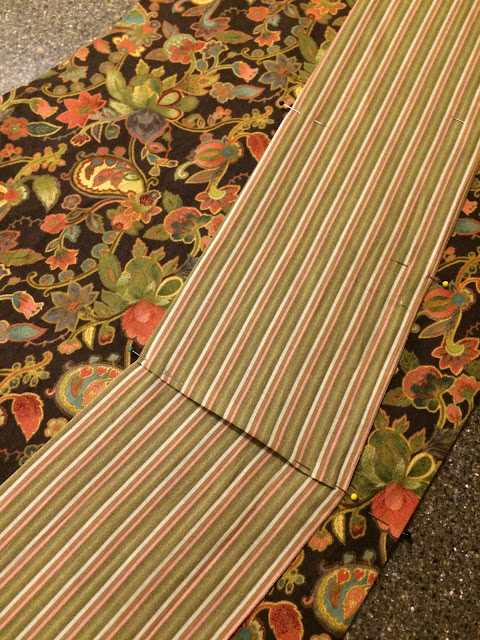 I machine-stitched the trim down to the front panels, then sewed two narrower strips of green striped cotton onto the bottoms of the sleeves. 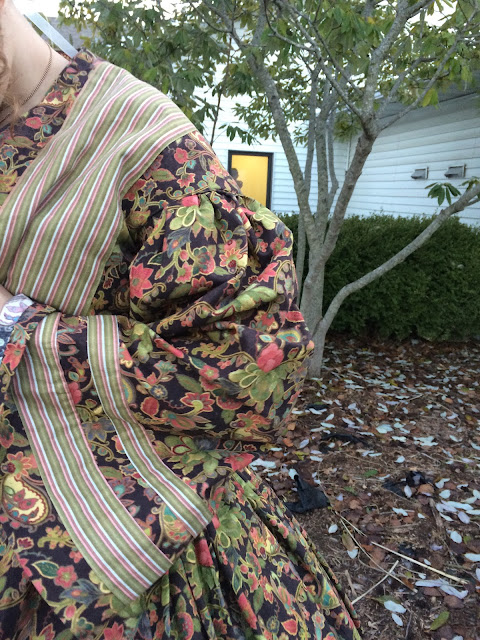 Speaking of sleeves, I'd had lots of ideas for fun layered or puffed sleeves I could do on this project. I particularly likes the sleeves on this 1850's wrapper, and had planned to replicate them. 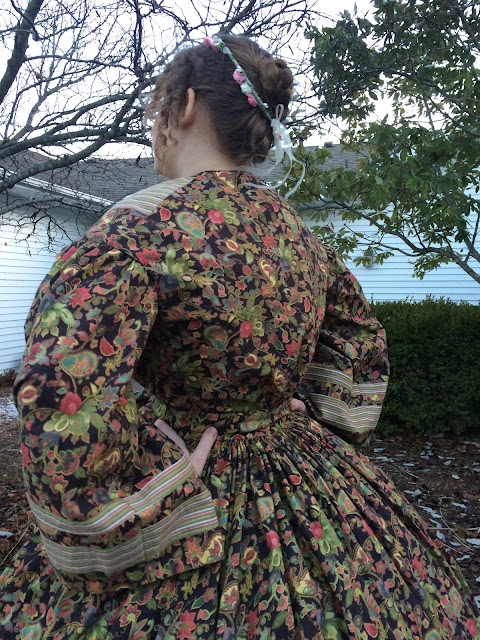 So, the fitted lining of the sleeves was abandoned, but that wasn't the end of linings for this project. Oh no, from the outside, 19th century wrappers may look loose and unfitted, but that's a bit of an illusion. The loose front outer layer hides a fitted bodice lining layer which holds the wrapper in place and keeps everything looking tidy. 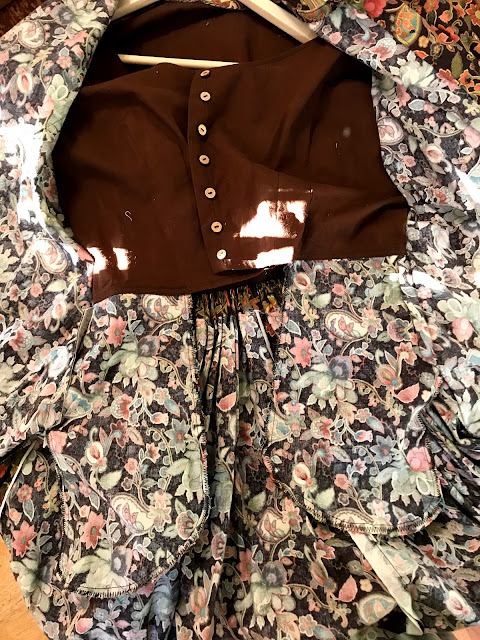 Attached at the shoulders and the side seams is a plain brown cotton lining, fitted with darts. When the wrapper is worn, this is first buttoned up. 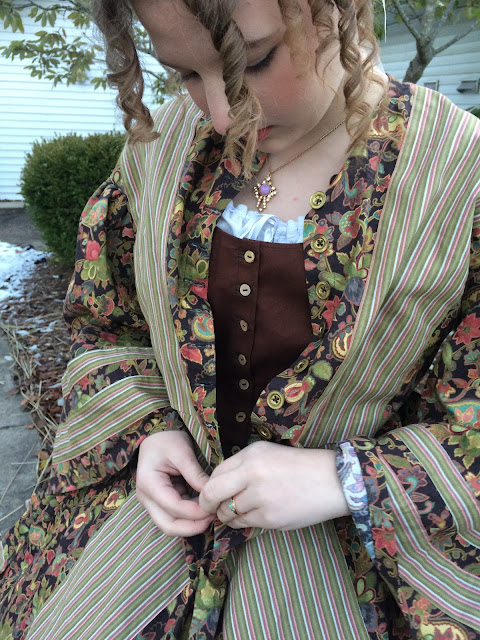 Then the outer layer is buttoned up - from neck to hem with 18 shiny gold buttons I found in my stash. (No idea where they came from, but they were perfect for this project!)

After that, the waist is "fitted" with a sash I sewed into the side seams, inspired by this 1860's wrapper:


This gathers up the front waist, giving the wrapper the hour glass shape of the mid-19th century. 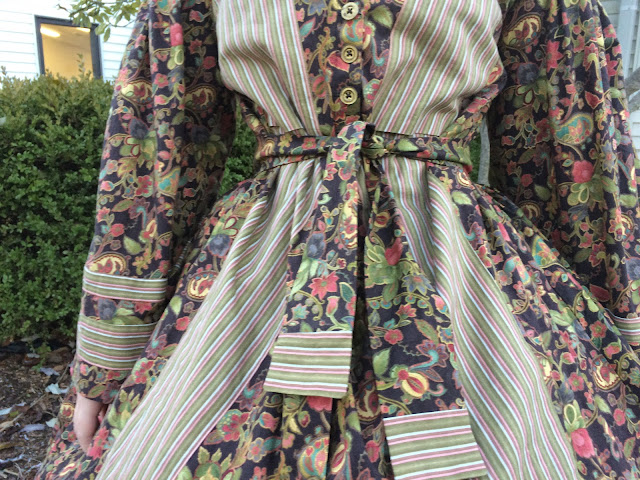 I met my goal of getting the wrapper done in one weekend, with the exception of the hem - I wanted to hand-sew that. 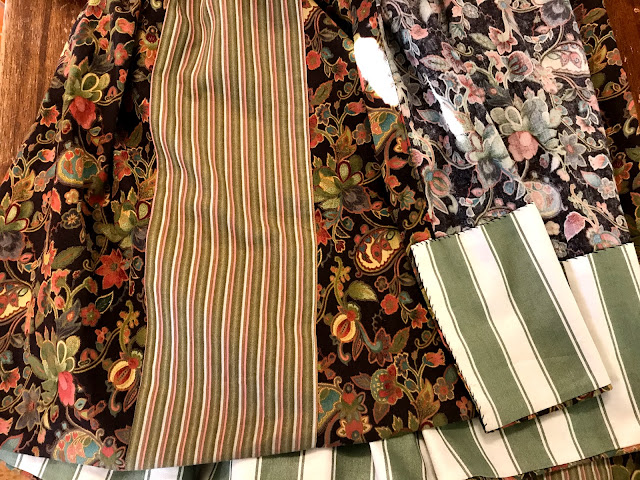 Thus, the hem got faced with polished cotton and hand-sewn in place between other projects the following week. 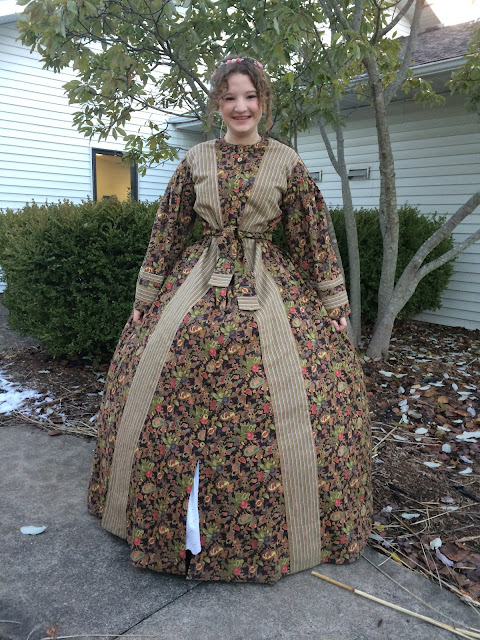 Even with that hand-sewn hem, the wrapper was still done by opening night of the play. 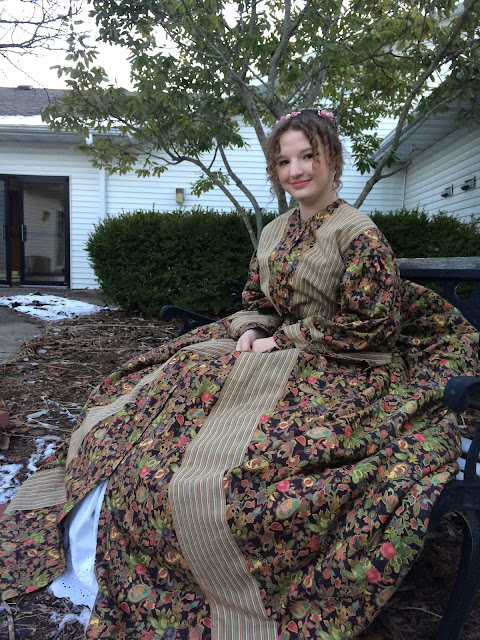 My sister wore it splendidly on stage, over the ball gown, and looked the part of a Dickens' Caroler. (With the addition of a cloak and bonnet, which have not yet been photographed - but they were worn, I promise you!) 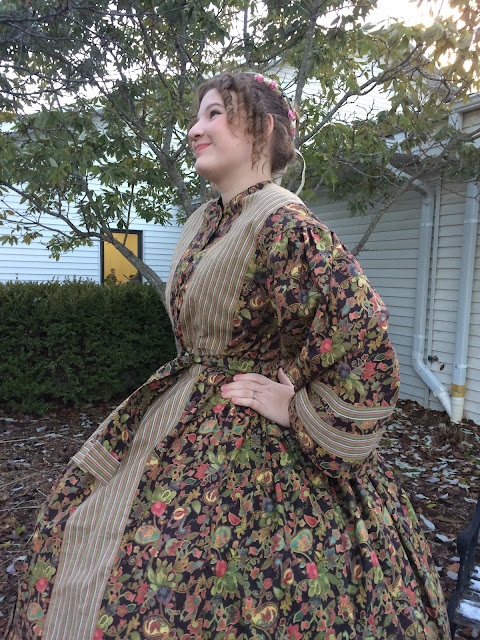 I am pretty darned pleased with how the finished wrapper turned out, even though time required more machine sewing than I'd planned. 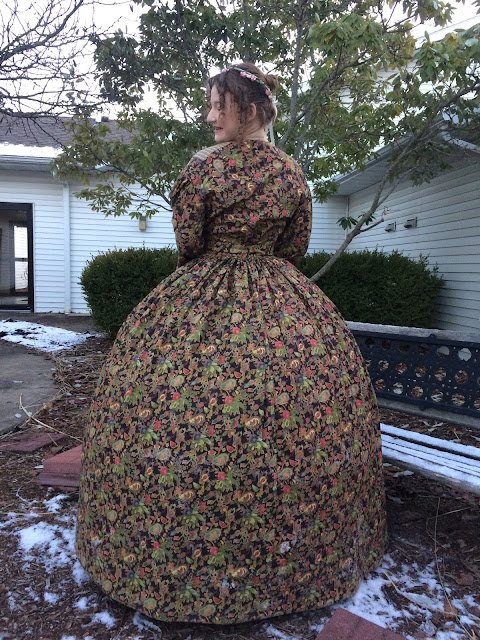 It looks the part - and is an excellent addition to my costume closet! 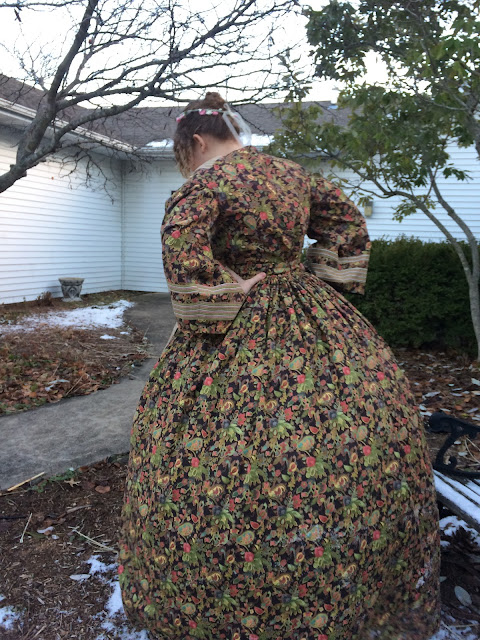 After two 1860's ball gowns in the past few years, I needed something more relaxed from this era! 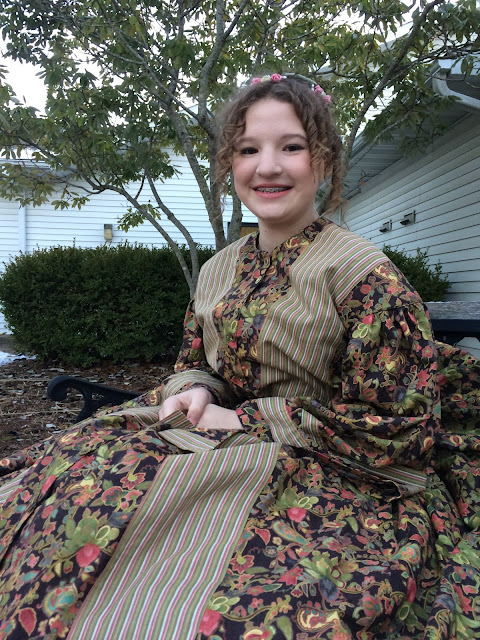 I also used my wrapper as my entry for the Historical Sew Monthly December Challenge; Neglected Challenge -  Make something for a past challenge you either missed, or didn't make exactly what you wanted for. This Wrapper is my re-do for Challenge #3 of 2018 - comfort at home. I made an apron for that challenge, but what I'd really wanted to make was a wrapper - I just didn't have the time or materials back in March to do that. (And the apron I made really was worth making too - it also got used in the play!) 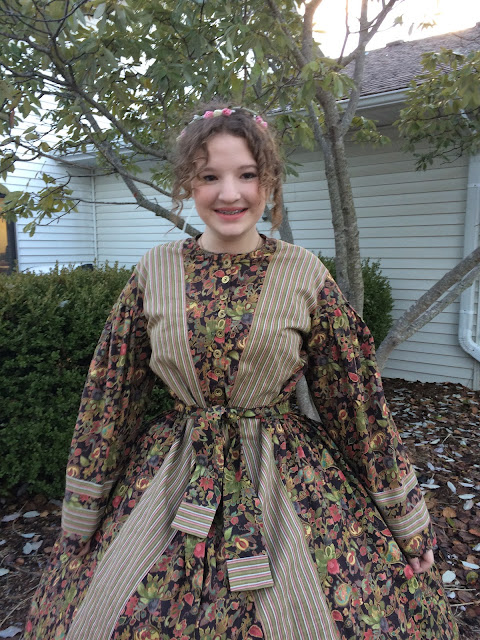 Thus, this wrapper feels like a very fitting way to end my 2018 costuming - A garment I vaguely wanted to make at the beginning of the year, became slightly obsessed with the idea of making in the middle of the year, and finally got around to making, in a hurry, at the end of the year. 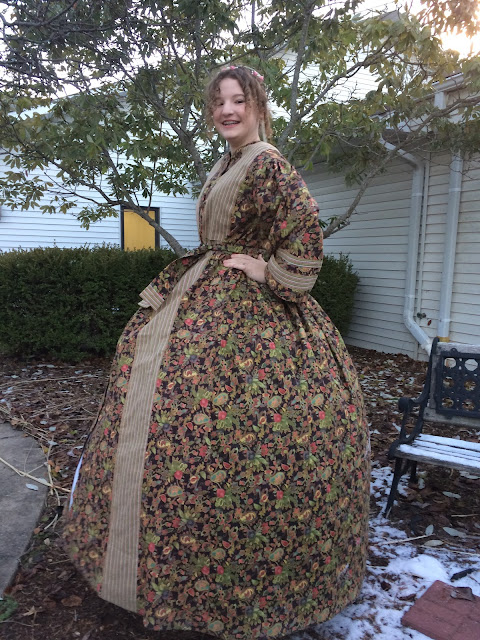 What the item is: A Mid-Victorian Wrapper
What passed challenge are you recreating: Comfort at Home.

Material: Quilter's Cotton Prints, Solid brown cotton for lining, Polished cotton for hem facing.
Pattern:Butterick B5831, heavily altered.
Year: It would be appropriate for the 1850's and 60's. I studied pictures of wrappers from the 1840's through 1870's while making this.

How historically accurate is it? The pattern I wound up with is fairy accurate, as is the overall design. Cotton is an accurate fabric choice for this type of garment, but I'm not sure exactly how accurate the print is. And the green striped fabric I used for trim is a printed stripe rather than a woven stripe. The construction methods are decent - it's a mix of hand and machine sewing, which would be accurate, however, as I was on a time crunch, I used the machine more than would be accurate for the era. The button holes are done by machine and the trim was applied by machine, which would not have been accurate.

Hours to complete: One weekend. Around 10 hours I think. 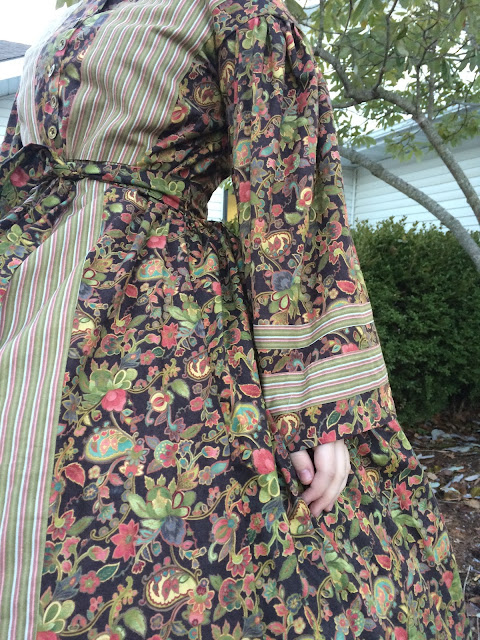