I have made an awful lot of pajama pants over the years. An awful lot. PJ pants are relatively quick and easy to make, a very useful garment to own, and they make great gifts. Thus, I have made a ton of PJ pants over the past 10+ years, but I don't think I've ever blogged about them. Why not? Well, for starters, I never bother getting pictures of them, and second, they're just not the most exciting thing to write about. However, there is a first time for everything. At Christmas my siblings and I got PJ pictures, so half the battle gone, I might as well write about these pajama pants I made. 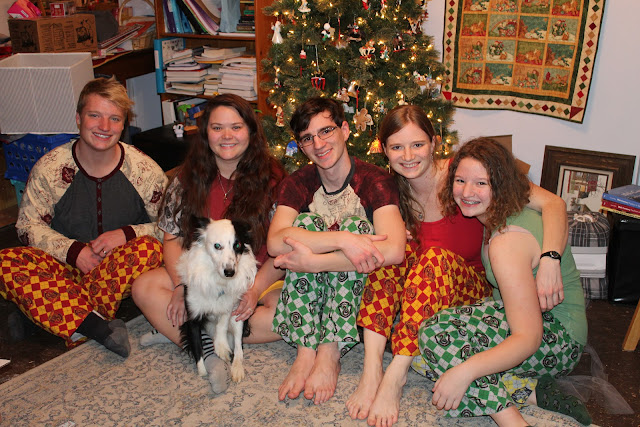 In 2018 I came up with the brilliant idea of making my siblings and I PJ pants according to our Hogwarts houses. My oldest brother, his wife, and I are all Gryffindors, while the youngest two siblings are Slytherins. Thus I picked up several yards of Gryffindor and Slytherin flannel from Joann's, brought it home, and proceeded to cut out PJ pants. I got the PJ pants for my sister and youngest brother sewn up, wrapped, and under the tree before Christmas morning. A month later I finished my sister-in-law's PJ pants so I gave them to her when her birthday came around. As for the other brother and myself, well, our PJ pants remained half cut out, pinned to to pattern pieces, in a pile, in the corner of my sewing room. 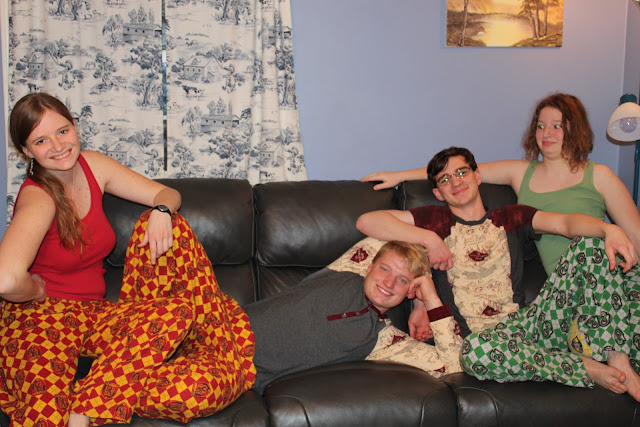 This year I dug out that Gryffindor flannel, finished our PJ pants, and gave my brother his for Christmas. Meanwhile, I made his wife a Gryffindor night shirt for her Christmas gift. 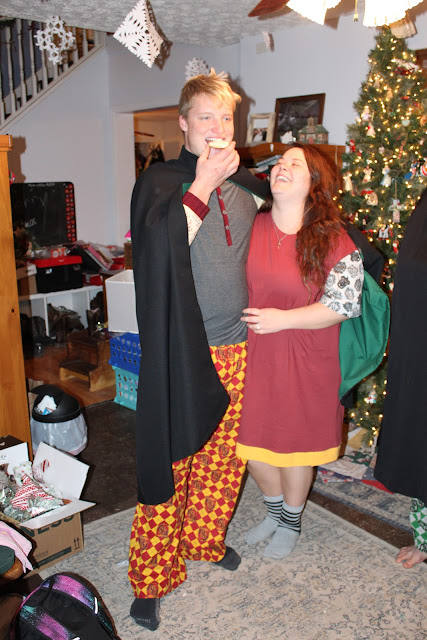 After unwrapping gifts, my sister-in-law said we needed Christmas jammie pictures, so the youngest siblings were dispatched to find their Slytherin PJ pants from last year, the rest of us went to put on our new Gryffindor attire, Mom was drafted as photographer, and the pajama pictures were happening! 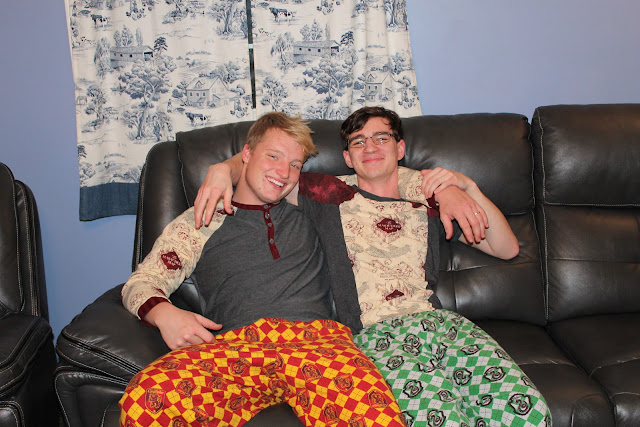 Last year I made everyone shirts from the Marauder's map knit fabric Joann's had, and my brothers decided to pull out those shirts to wear with their PJ pants for pictures. 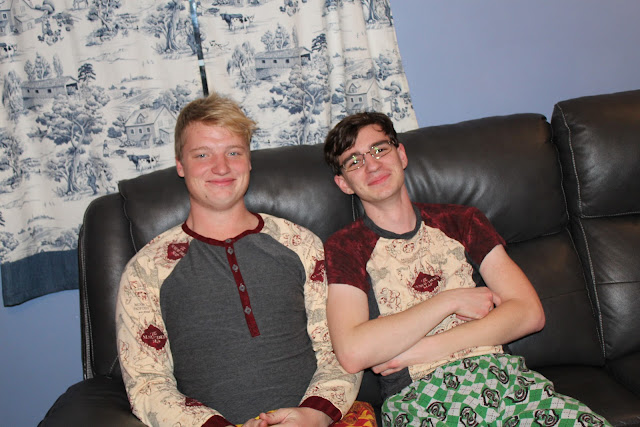 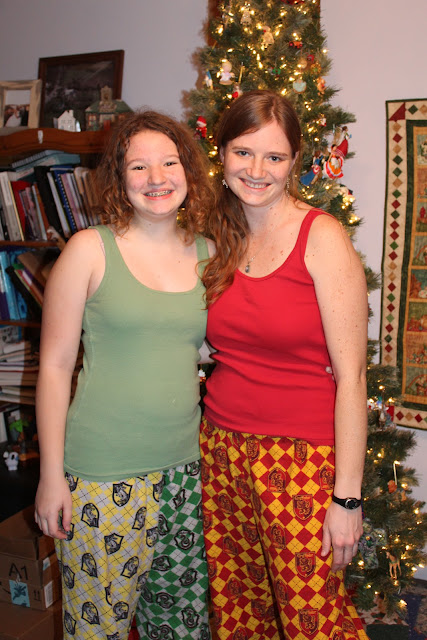 My sister and I also have Marauder's map shirts (as does my sister-in-law for that matter), but we decided to just wear tank tops with our PJ pants instead. Our pants are made with my current go-to PJ pattern Simplicity 8803. I don't remember what pattern I used for the boy's pants. 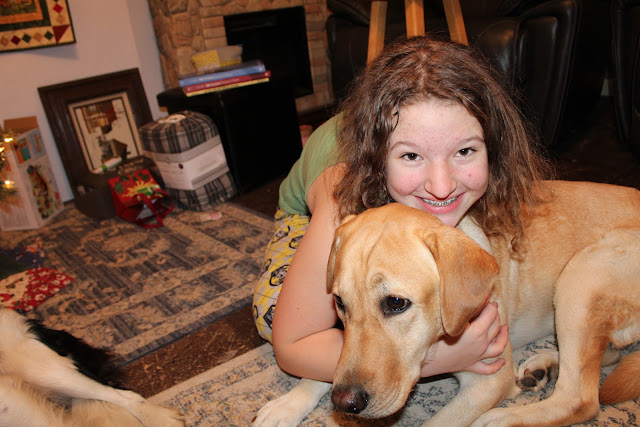 Yes, my sister's pants have two different colored legs. When she originally took the house sorting quiz on Pottermore she was sorted into Sytherin. She wasn't satisfied with this, so she took a second quiz and was sorted into Hufflepuff. She has since decided to claim Slytherin as her house, but to honor her "Slytherpuff" sorting, I made her pants with one leg Slytherin fabric and one leg Hufflepuff fabric. 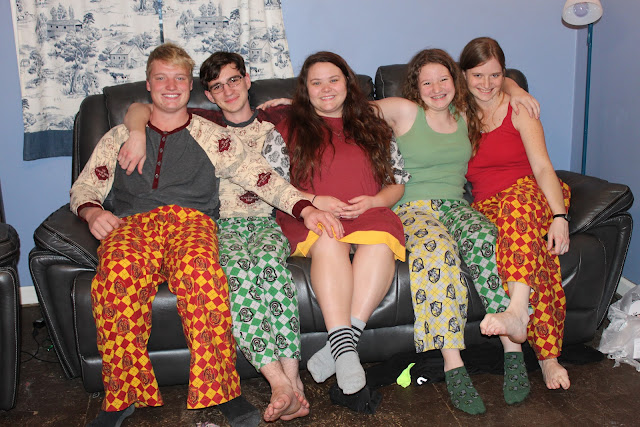 My sister-in-law's PJ pants from last year are similar, with one leg Gryffindor and one leg Hufflepuff (She's been sorted into Gryffindor and has an affinity for Hufflepuff), but for her night shirt this year I decided to stick with Gryffindor. 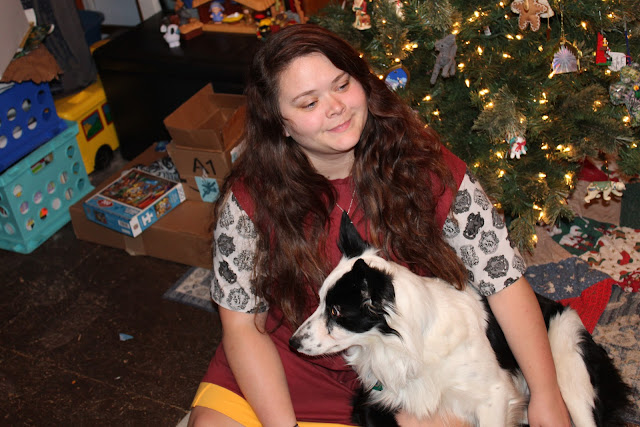 I found the gray knit fabric with all the house crests on it at Joann's, the red knit for the body of the shirt was obtained at Walmart several years ago, and the gold for the bottom band was harvested from a T-shirt in my refashion stash. (Somehow I had no yellow or gold knit in my fabric stash.) 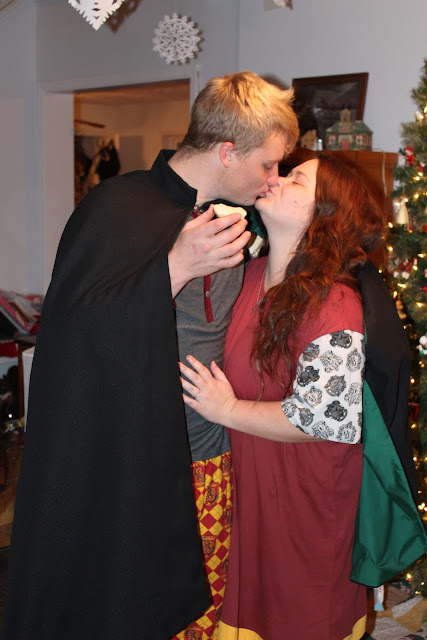 I used the Pixie Tee pattern by Chalk and Notch for the night shirt, and am quite pleased with how this garment turned out! 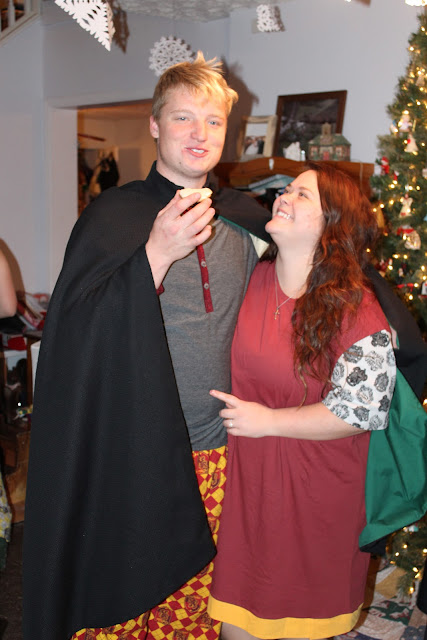 And so, those are our Christmas jammies. 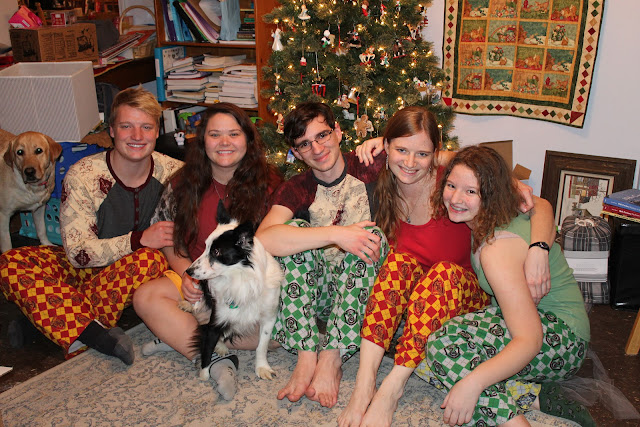 All quite comfortable and rather cute if I do say so myself! (And picture worthy!) 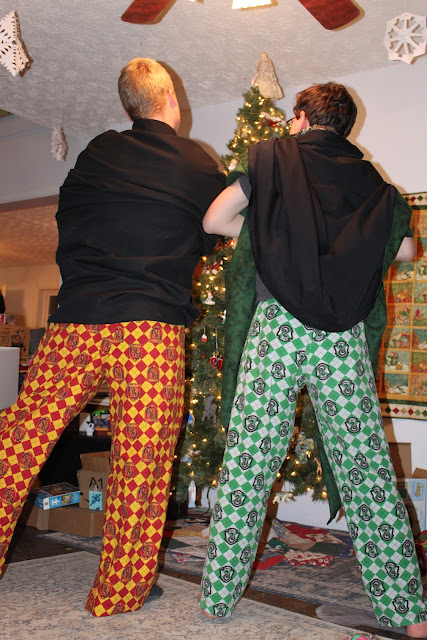 Posted by Alyssa at January 05, 2020
Email ThisBlogThis!Share to TwitterShare to FacebookShare to Pinterest
Labels: Sewing, Sewing for Boys