It's almost that time of year again. Costuming madness. Sewing Craziness. Every year for the past 6 years my two best friends and I have gone to the Japanese Festival. Every year for the past 5 years we have dressed up for it. My best friends love Anime and Japanese culture. Me, not so much, but I do love to dress up and the Japanese Festival is great fun! The month or so leading up to the festival (and especially the last week before the festival) are a little crazy as we make our costumes. Last year we dressed up from Legend of Zelda. Our costumes were awesome! Now, how do we beat that this year? I'm not sure if we can, but we're gonna try! The festival is a little over a month away so it's time to get started.

This year the chosen cosplay is Studio Ghibli movie characters. Any Studio Ghibli movie, any character. I picked Sophie from Howl's Moving Castle for my cosplay. I picked her for a couple reasons. She has light colored hair in a single braid down her back, so no fancy hair stuff required for me.  In the movie she starts out as a hat maker, which is about as close as I can get to a seamstress character. And finally, her dress! 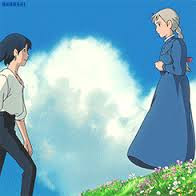 Ok, so it's not a particularly exciting dress, but I've been wanting to make a basic 1890's dress (think Anne of Green Gables) for some time now  and this dress definitely has the right elements for that. For example, look at this late 1890's work dress from the Smithsonian.

Imagine this in blue. Look at the shapes in the bodice. See the similarities?

So, yes, I'm using the Japanese Festival as an excuse to sew a historically accurate 1890's dress like the one above. I'll make the dress in a blue cotton print, so it will be usable for both this cosplay and any historical events I come across requiring an 1890's dress. It's a very basic dress of the period, but I think that it's a great way to start to familiarize myself with late 1800's clothing. Up until now I've stuck with early to mid 19th century, so this is a totally new era for me! I'm excited! Along with the dress I'll also need a straw hat like this one to complete the cosplay. 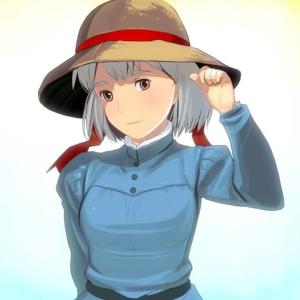 The dress is a rather large undertaking, but at least the hat will be easy! A small straw hat with a red ribbon tied around it. I think I already have a hat I can use.

Now, I mentioned I planned to use a blue cotton print for making this dress, not a solid blue fabric. Why? Well there are two reasons for that. First, solid colored cottons were rather unusual in the 1800's and I'm trying to make this as historically accurate as possible. Second, the theme for Historical Sew Monthly's August challenge is patterns. Not sewing patterns but patterned fabric or a specific feature of the garment. I've not kept up with HSM like I've planned to this year, but since I'm making a historical garment in August, by golly, I'm going to make it fit into the challenge!

I really like the fabric of this 1890's cotton dress and I'm hoping to find something similar in blue.

Now, I just need to go fabric shopping and I can get started!