Pick a person from history. Research them. Become the class expert on that person. Write a paper on them and present it to the class. That was my sister's school assignment, and she did awesome! 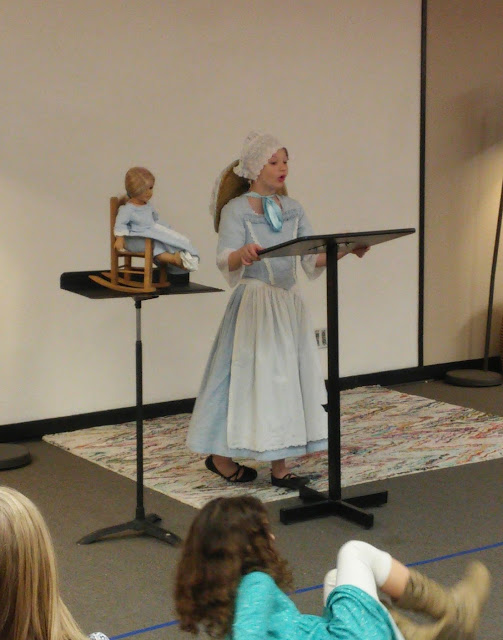 She picked Mary Ludwig, aka Molly Pitcher, and spent weeks researching her. Molly carried water to the solders on the battle field during the Revolutionary War, and even fought in place of her husband when he was injured in battle.
On the day she was to present, my sister got up in front of her class and the parents of her classmates and spoke loudly and clearly as she told us of the life of Molly. There wasn't an ounce of stage fright in her!

Now, as you may have noticed, one of the fun parts of this project was dressing up as the chosen person from history. My sister needed a late 18th century dress, and she had it all planned out when she asked for my help. She wanted the dress to be blue with white lace, and she wanted to dress as Molly would have when she was young, rather than later on when she was on the battle field. That was doable, but first we needed to do a bit of research. What would a young girl's dress from the 1760's have actually looked like?

As Molly's family was rather poor we decided linen would be the best material for the dress, as it was the most readily available and affordable material of the time. Walmart happened to have a pale blue linen/rayon blend on their shelves for the amazing price of $3 per yard. You can't beat that! (Now, of corse rayon wasn't around in the 18th century, but 100% linen today is rather expensive) We brought home everything that was left on the bolt and I got to work. 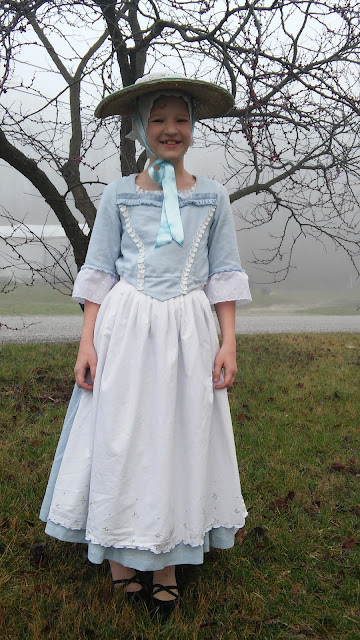 I used Simplicity 3725 as my base pattern. I changed the shaping of the center front bodice panel and how it attached to the skirt in order to match our inspiration dresses. I trimmed the dress with pleated self-trim and white cotton eyelet from my stash. 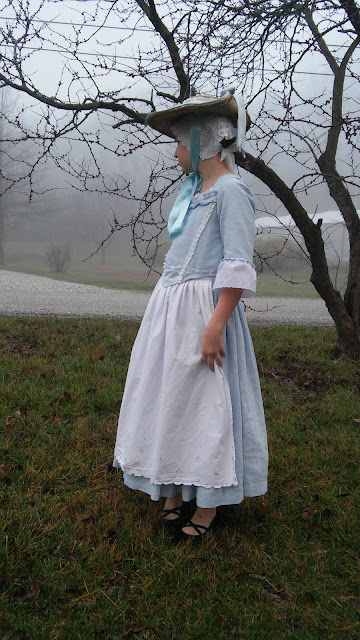 The apron is made from an embroidered (extremely soft) cotton sheet I picked up at a thrift store. The shift, worn underneath the dress, is made from the remainder of that sheet. 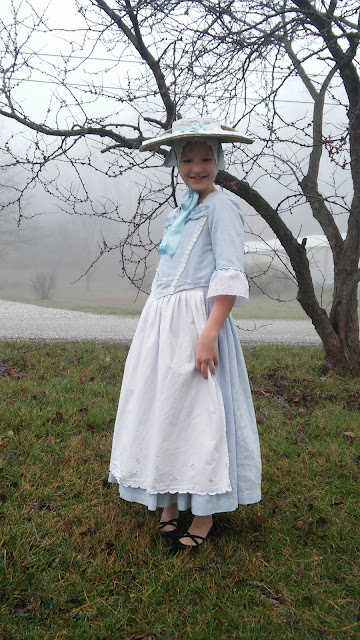 On her head my sister wore a white eyelet cap I made a while back. On top of that, a Bergere hat that I decided to make last minute.

I found these straw hats at a thrift store the weekend before my sister's presentation. 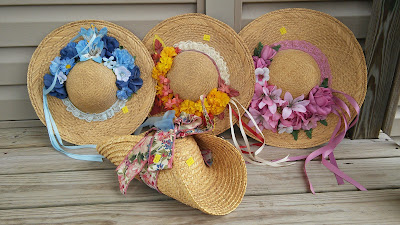 I removed the decorations from the blue hat, soaked it in water to re-shape it, then re-trimmed it to match my sister's dress. 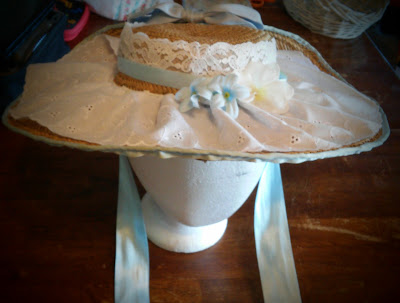 Being made last minute, some of the trim really ought to be re-attached a bit better, but the over all look really completed my sister's outfit!

Also, March's Historical Sew Monthly challenge was protection. I didn't complete my planned project, but Bergere hat's were worn to protect ladies from the sun. So, as it was made in March, I'm calling this hat my entry.

What the item is: Bergere HatThe Challenge: #3, ProtectionFabric/Materials: Straw Hat, Blue Satin Ribbon, Lace Trim, Eyelet Trim, Silk FlowersPattern: NoneYear: Late 18th CenturyNotions: ThreadHow historically accurate is it? Not very. The look is right. The hat itself is made of straw, which is correct, but all of the other materials and the method of construction are modern.Hours to complete: About 3, one Sunday afternoon.First worn: March 14th, for my sister's school presentation.Total cost: $4 for the hat, everything else was stash, either given to me or leftover from another project, so $0.

This was a very fun project to work on with my little sister, and I was so proud when she got up to present her paper to the class! I'm looking forward to several more years of helping her with fantastic school projects! (meanwhile, now I really want to make myself a historically accurate 18th century dress!)